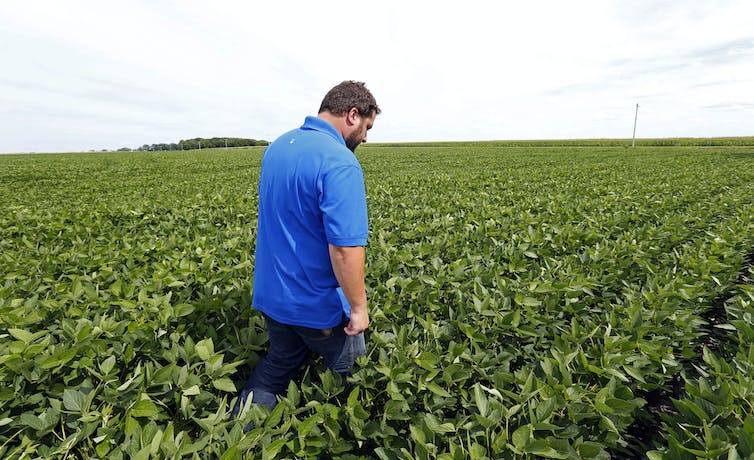 Farmer Michael Petefish walks through one of his soybean fields in southern Minnesota. AP Photo/Jim Mone

The Trump administration plans to give American farmers and ranchers hurt by the current trade war US$12 billion in emergency relief to mitigate the impact of tariffs on their exports.

While this may lessen the blow of an already struggling agricultural economy in the short run, it is only a Band-Aid. As an agricultural economist, I know that no one really wins in a trade war. As someone who grew up on a cotton and alfalfa farm in rural Arizona, I know firsthand that producers want access to markets – not government handouts.

If the trade conflict with China continues much longer, it will likely leave lasting scars on the entire agricultural sector as well as the overall U.S. economy.

How did we get here?

In January, the Trump administration placed tariffs on Chinese solar panels and washing machines to protect U.S. manufacturers. It followed that in March with tariffs on all imports of steel and aluminum – citing national security concerns. Though many countries were subsequently exempted from the U.S. import tariffs on steel and aluminum, China was the primary target.

China responded by imposing tariffs on U.S. exports worth $3 billion in April as countermeasures to U.S. tariffs. Another round of U.S. duties on Chinese products prompted additional retaliation from China in July on $34 billion worth of U.S. goods, furthering a tit-for-tat trade conflict with no end in sight.

China is the second-largest export market for U.S. agriculture behind Canada, which means it’s no surprise that such goods made up the vast majority of the more than 600 products that have been targeted by China with tariffs of 15 percent to 25 percent in two rounds of retaliation. Among them are cotton, wheat, dairy, wine, fruits, nuts, soybeans and pork – to name just a few. 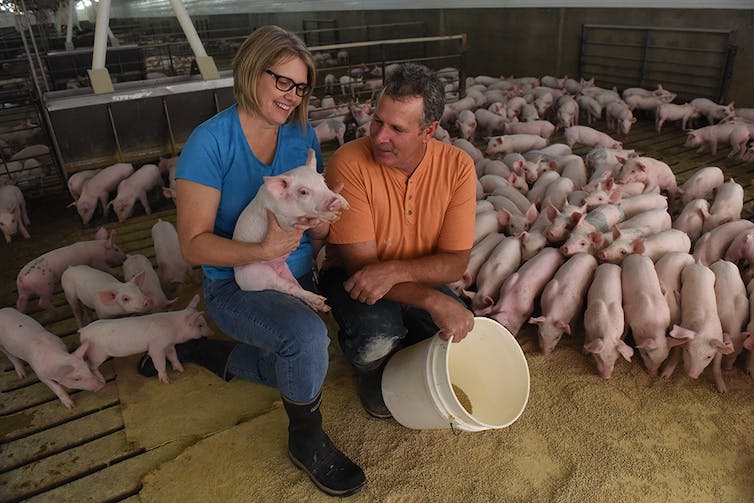 National Pork Board 2016 America’s Pig Farmer of the Year Brad Greenway and his wife, Peggy Greenway, feed pigs in one of their wean-to-finish pig barns on their farm in Mitchell, South Dakota. AP Images for National Pork Board/Jay Pickthorn

Caught in the crossfire

Since China’s tariffs only recently took effect and more retaliation could happen, it’s still too early to fully understand the potential damage. But U.S. farmers and ranchers are bracing for the worst.

For example, China is the world’s largest consumer of soybeans, gobbling up about 65 percent of all trade of the commodity. The Chinese bought more than $12 billion in American soybeans in 2017, or 57 percent of all U.S. exports of the crop.

Thanks to the 25 percent tariff on U.S. soybeans, Chinese importers have been canceling contracts with American farmers for later in the year and buying more from Brazil – which is expected to soon be the world’s top soybean producer. 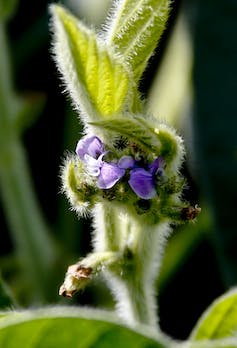 A soybean plant blossoms on a farm in Renfrew, Pennsylvania. AP Photo/Keith Srakocic

A recent study suggests that if the tariffs stay in place, U.S. exports of soybeans could fall 24 percent to 34 percent, while production could decline 11 percent to 15 percent.

The extent of the impact depends on whether U.S. soybean farmers are able to find new markets for their crops. In addition, because China consumes so many soybeans – which it primarily uses for livestock feed – it probably can’t cut out U.S. producers entirely. Chinese importers will simply have to pay more for U.S.-sourced soybeans to meet domestic demand.

The pork industry, which was already subject to tariffs before the trade war began, has been especially hard hit. After successive rounds of tariffs, U.S. pork is now subject to Chinese duties of as high as 70 percent.

Pork sales to China account for 10 percent of total U.S. exports of that product category. Since China already produces about 97 percent of the pork it consumes, it should be relatively easy for the Chinese to simply substitute domestic and other foreign production for the U.S. imports.

While many U.S. pork producers may be able to find new markets for their goods, that probably won’t be the case for offal, which are pig parts such as organs and entrails. Chinese consumers consider offal a delicacy, while it is just used an input for pet food in the U.S. The tariffs have already eroded U.S. exports of pig parts to China.

Some of my own research focuses on Chinese demand for Western wine and how retaliatory tariffs could hurt the U.S. wine industry, which sees China as a very important growth market at a time when others are stagnating. My collaborator and I estimate that the new 15 percent tariff on American wine could cause a 10 percent drop in imports to China.

If the trade war escalates, the harm could get even worse. For example, China is the biggest buyer of U.S. exports of animal hides – which haven’t yet been hit by retaliatory tariffs but could be in another round. And the impact is being felt across the U.S., with at least some workers in pretty much every state affected by agricultural and other tariffs. 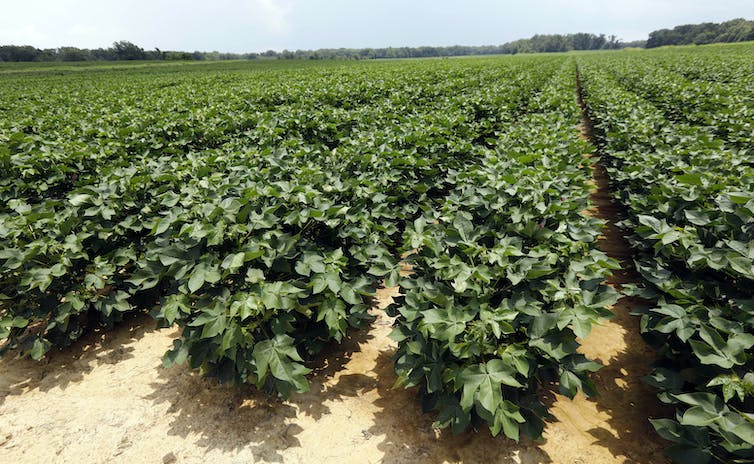 The consequences of a prolonged trade war could be severe for U.S. agricultural producers.

As the tariffs make the cost of U.S. crops and meat go up for Chinese customers, they’ll begin to import products that are relatively cheaper from other countries such as Brazil.

China might also drive up their own domestic production of certain products – such as pork – thus depriving American farmers of the export market. Or in the case of wine, U.S. producers were already at a disadvantage to their French and Australian rivals. A prolonged trade dispute could limit American winemakers’ exports to a promising market.

If American agricultural producers can’t increase exports to other countries to make up for lost sales to China, farm incomes would most certainly fall. And even if they do manage to find new markets, perhaps with the help of the new government aid package, it’ll be hard to make up for the world’s largest market for food imports. 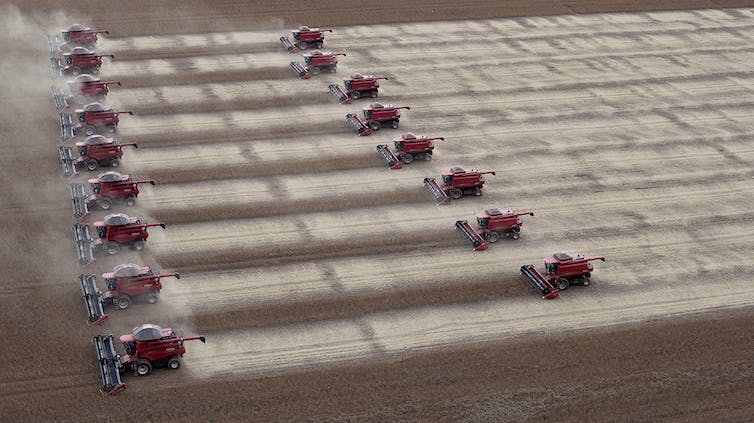 Brazil is the world’s second-largest soy producer after the U.S., which may soon change. AP Photo/Andre Penner

Will the aid help?

As for the Trump administration’s promised aid package, the U.S. Department of Agriculture said on July 24 that it would divide $12 billion among three programs that will:

While key details about the aid package still need to be worked out, fundamentally it is an attempt by the administration to soften the blow of how other countries are responding to its protectionist trade policies. It may provide some short-term relief for U.S. farmers and ranchers at a time when net farm incomes are at a 12-year low. The effort is futile, however, if the trade conflict is not resolved soon because of the lasting damage to trade relationships.

Furthermore, the aid package may violate U.S. commitments to the World Trade Organization, adding to the list of concerns of potential violations of the rules-based trading system the U.S. has agreed to adhere to. 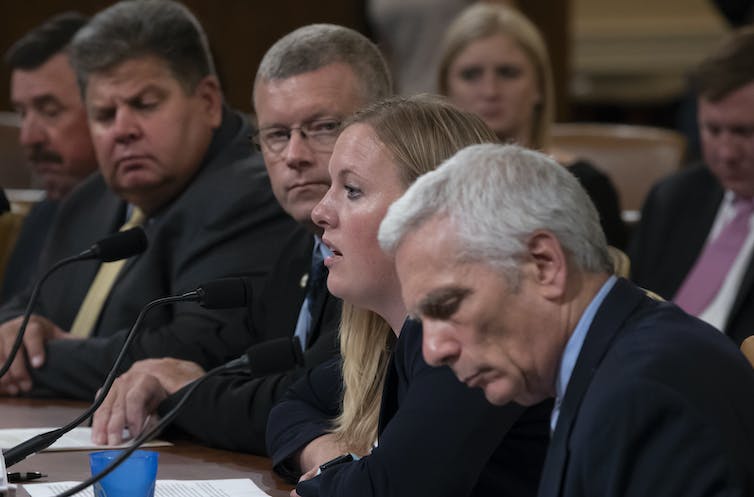 Farmers testify before the House Subcommittee on Trade about the effect of foreign tariffs on American agriculture. AP Photo/J. Scott Applewhite

Damage to a market

In the last decade, China has become an incredibly important market for American agriculture. U.S. producers would like to not only maintain, but grow China as a market, given its large consumer base and rising incomes, which afford increasing per capita consumption and demand for U.S. agricultural products.

In my experience as an economist rooted in agriculture, U.S. farmers and ranchers prefer to be able to sell their goods to consumers around the world rather than receive government aid because of a trade war in which they’ve been caught in the crossfire. They want their government to help them find more consumers, not turn them away.

This article was originally published on The Conversation. Read the original article.

WASHINGTON (AP) — The Justice Department announced Friday a cross-government effort to investigate and prosecute redlining, the practice of banks discriminating against racial minorities or certain neighborhoods. It is the first major expansion of redlining investigations since the Obama administration.

WASHINGTON (AP) — Children under 18 and people from dozens of countries with a shortage of vaccines will be exempt from new rules that will require most travelers to the United States be vaccinated against COVID-19, the Biden administration announced.

RALEIGH, N.C. (AP) — A decade ago, North Carolina Republicans redrew their legislative districts to help their party in a way that a federal court ruled illegally deprived Black voters of their right to political representation. A state court later struck down Republican-drawn maps as based on pure partisanship.

WASHINGTON (AP) — Hundreds of clinics pushing unproven stem cell procedures caught a big break from the U.S. government in 2017: They would have three years to show that their questionable treatments were safe and worked before regulators started cracking down.

WASHINGTON (AP) — The Supreme Court on Friday rejected a plea from South Carolina to reimpose the death penalty on a South Carolina inmate whose death sentence stood for two decades until a federal appeals court threw it out in August.

WASHINGTON (AP) — In March, as claims about the dangers and ineffectiveness of coronavirus vaccines spun across social media and undermined attempts to stop the spread of the virus, some Facebook employees thought they had found a way to help.

SIOUX FALLS, S.D. (AP) — South Dakota lawmakers will be taking a look at a state agency that has been at the center of questions about whether Gov. Kristi Noem used her influence to aid her daughter's application for a real estate appraiser license.

WASHINGTON (AP) — For the third time this year, Senate Democrats on Wednesday tried to pass sweeping elections legislation that they tout as a powerful counterweight to new voting restrictions sweeping conservative-controlled states.

MOUNT PLEASANT, S.C. (AP) — A widow is suing a South Carolina county two years after her husband died following a ketamine injection he received during an arrest.

NASA and SpaceX count down to Halloween launch

NASA and SpaceX count down to Halloween launch