Turning 100: A century of memories
0 Comments
Share this
{{featured_button_text}}
1 of 2 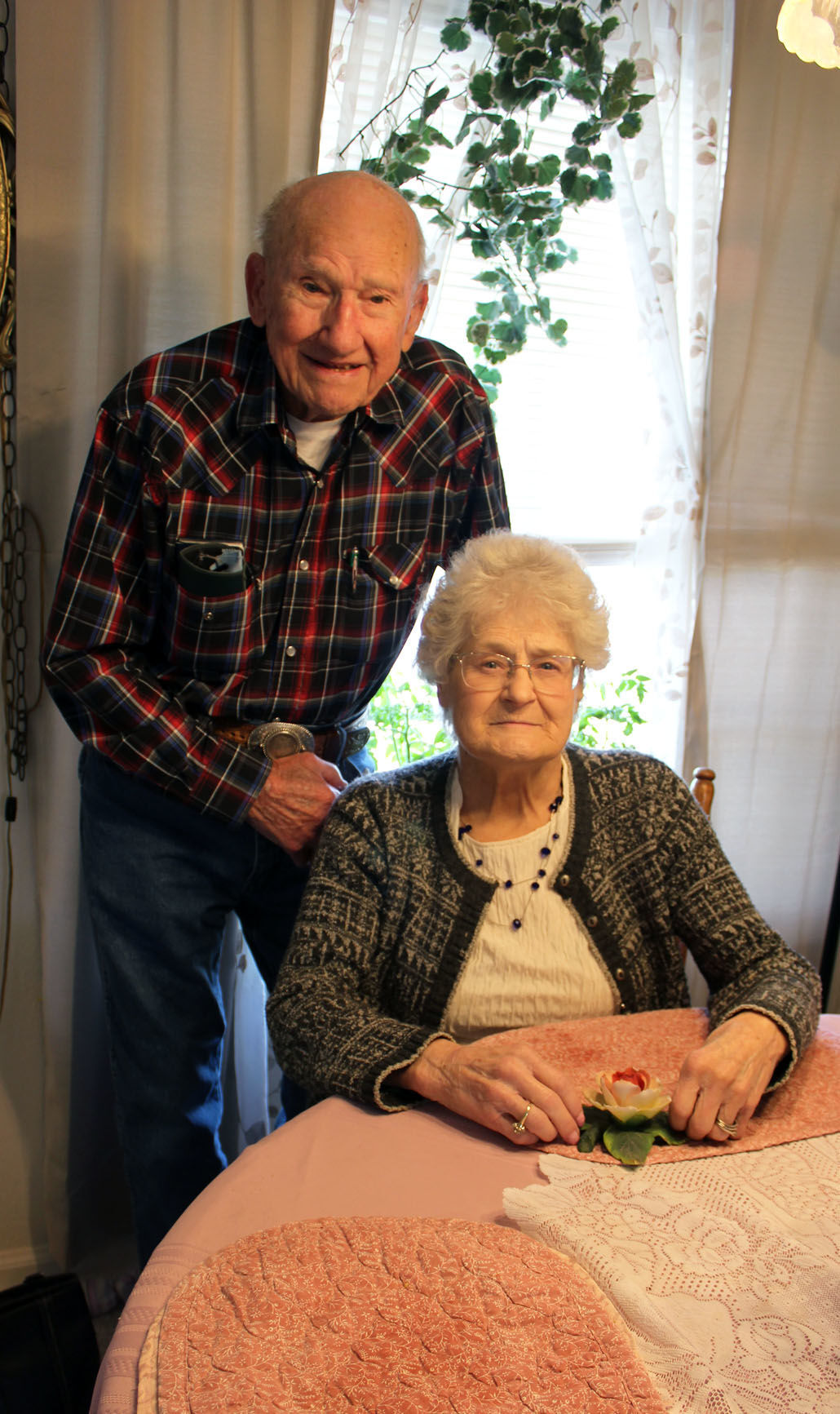 John Long, 100, and his wife, Sonya, 84, have been married 10 years. They met at The Manor of Sapphire Lutheran Homes and now rent a home in Hamilton. 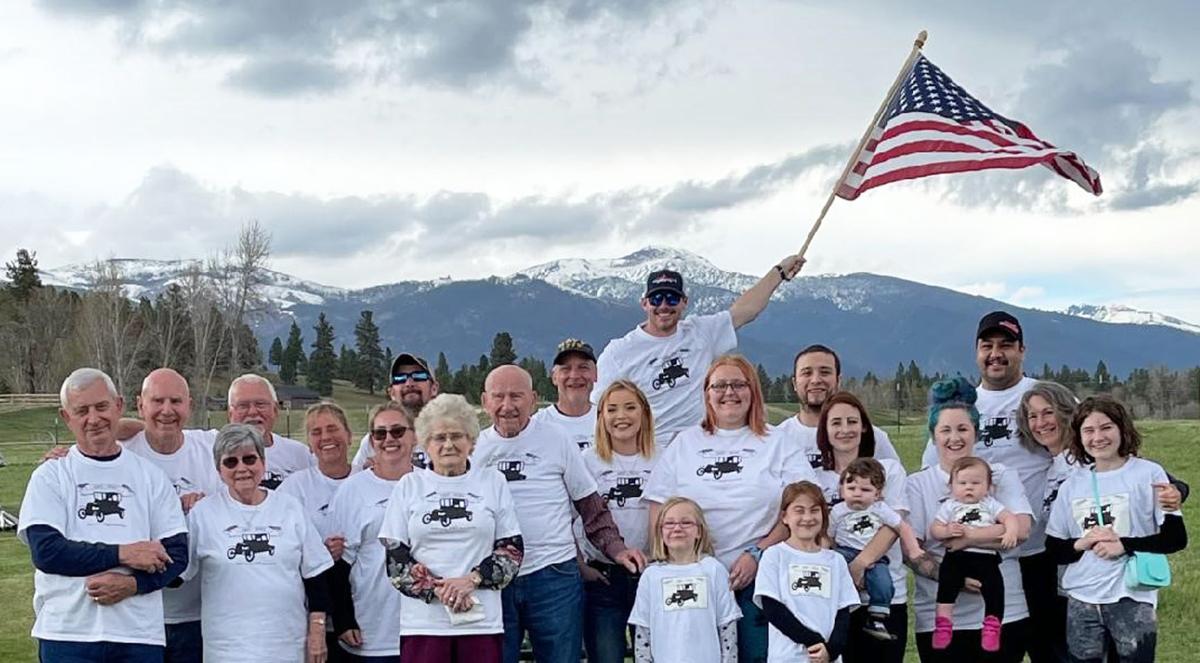 Sonya and John Long (8 and 9 from left) celebrated his 100th birthday with a plane fly-over, five generations in attendance and matching T-shirts for everyone.

John Long turned 100 on May 4, earning him the title of centurion. He still drives, wins at cribbage and last week enjoyed a birthday party with five generations.

He grew up in Oregon with two older brothers. He remembers living in a house that never had running water or an inside toilet. When electricity came in 1936, they had a light bulb that hung from a ceiling in a couple of rooms, but he wasn’t impressed.

“It would have been lighter to have a candle,” Long said. “We had a wood heater and wood stove and no refrigerator. We made a screen box with sacks and the water dripped down to keep the sacks wet. We had a cow and we put the milk in the box to get the cream to rise.”

He felt lucky to have food, and had no worries about leftovers. He said that at that time each family member could shoot two deer, so they ate a lot of venison.

“We canned the meat,” Long said. “Also, my brother and I dug a hole in the ground and lined it with railroad ties, filled it with sawdust and that kept pears for most of the winter.”

They got culled apples from a packing house to feed their pigs.

Long recalled that cars were different then.

“If you were lucky, you had curtains on the sides, there were no windows,” he said. “A big trip was 20-miles, and you’d usually have two or three flat tires on the way. We’d pull over to patch the tires, we couldn’t afford new ones.”

At that time there were no TVs, radios, or cell phones.

“You didn’t have them, so you didn’t miss them,” he said.

He remembers earning $5 one week and he took it all to get a new outfit at JC Penny’s.

He clearly remembers the depression in 1929.

“People didn’t have money, even if you worked you couldn’t get any money,” he said. “During the depression nobody had any money, so we all felt the same. I had a hard time finding enough to eat.”

He recalled after 1940 he had a nice family and served in the Air Force. John and his wife had two children and an afterthought, John, Cindy and Janet. They moved to California and he owned several small engine sales and repair shops for chainsaws, riding mowers and push mowers. When he retired, the couple moved to Montana and called the Bitterroot Valley “heaven on earth.”

The birthday party on May 1 had a plane fly over, matching T-shirts for everyone and five generations in attendance. John Long, Jr. came from California. Daughter Cindy was unable to travel from her home in Australia due to COVID-19 restrictions. Daughter Janet organized the party. She and her husband Steve own the Barking Lot in Hamilton and live in Victor.

“He’s been such an awesome Dad,” Janet Eden said. “He is so patient and kind. He taught me everything I know. I’ve been blessed to have him as my dad.”

Her brother agreed and said they grew up in a great family.

“Our childhood was amazing,” said John Jr., age 76. “At age 13 I took hunter safety course, got my license and Dad and I hunted together every year until I turned 50. We lived an hour from the ocean and fished for salmon too. We did that until he moved to Montana.”

He recalls working in his dad’s shop since age 10.

“I helped with cleaning the shop and learned a good work ethic from Dad,” he said. “Now when we get together, we play cribbage and backgammon. He loves to play games and is still sharp, he doesn’t miss a trick. It’s hard to believe he’s as old as he is. His brothers also lived a long time, so it’s a long-lived family.”

John Long’s first wife passed away when she was 86 so he moved into The Manor at Sapphire Lutheran Homes. There he met Sonya, who he married in 2012. They live in a rented home in Hamilton.

“He’s very active and very healthy,” Sonya said of John. “He never argues. He’s so kind and very gentle. His whole family is that way.”

She said a year of COVID has been disappointing. “I has been a crazy year, it’s been different,” she said.

John recalled the polio epidemic but said he wasn’t affected because he lived in a rural area.

Both John and Sonya made a point to say they received their COVID vaccinations.

“We got it, we’re done,” Sonya said. “We wanted to play Bingo. We went to the Hamilton Senior Center last week for the first time in a year. It was so great to see everyone.”

Underground lakes on Mars might not be filled with water

Form teams now for the Ravalli County Relay for Life  community-based fundraising event for the American Cancer Society in Hamilton on June 12. Register online at relayforlife.org/ravallimt.

The Ravalli County Extension Office will have a multi-purpose information booth all season keeping a continual presence at the Hamilton Farmers Market.

John Long, 100, and his wife, Sonya, 84, have been married 10 years. They met at The Manor of Sapphire Lutheran Homes and now rent a home in Hamilton.

Sonya and John Long (8 and 9 from left) celebrated his 100th birthday with a plane fly-over, five generations in attendance and matching T-shirts for everyone.