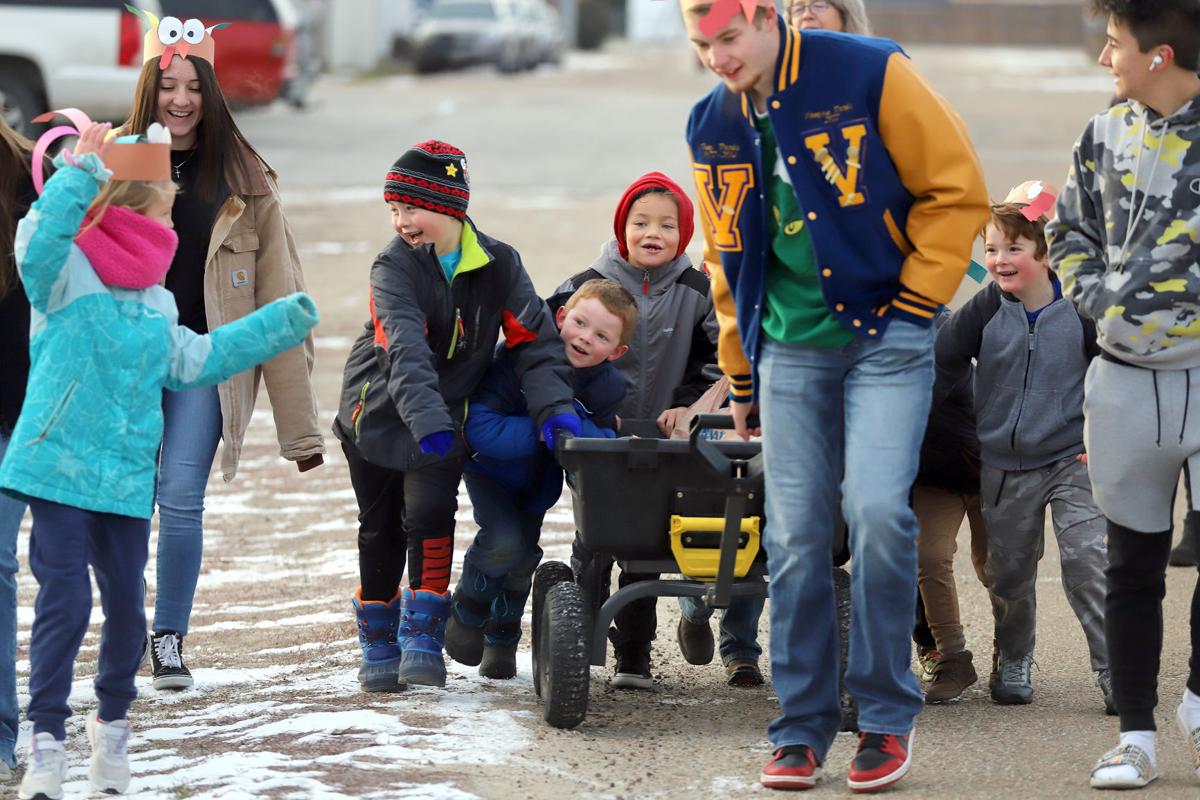 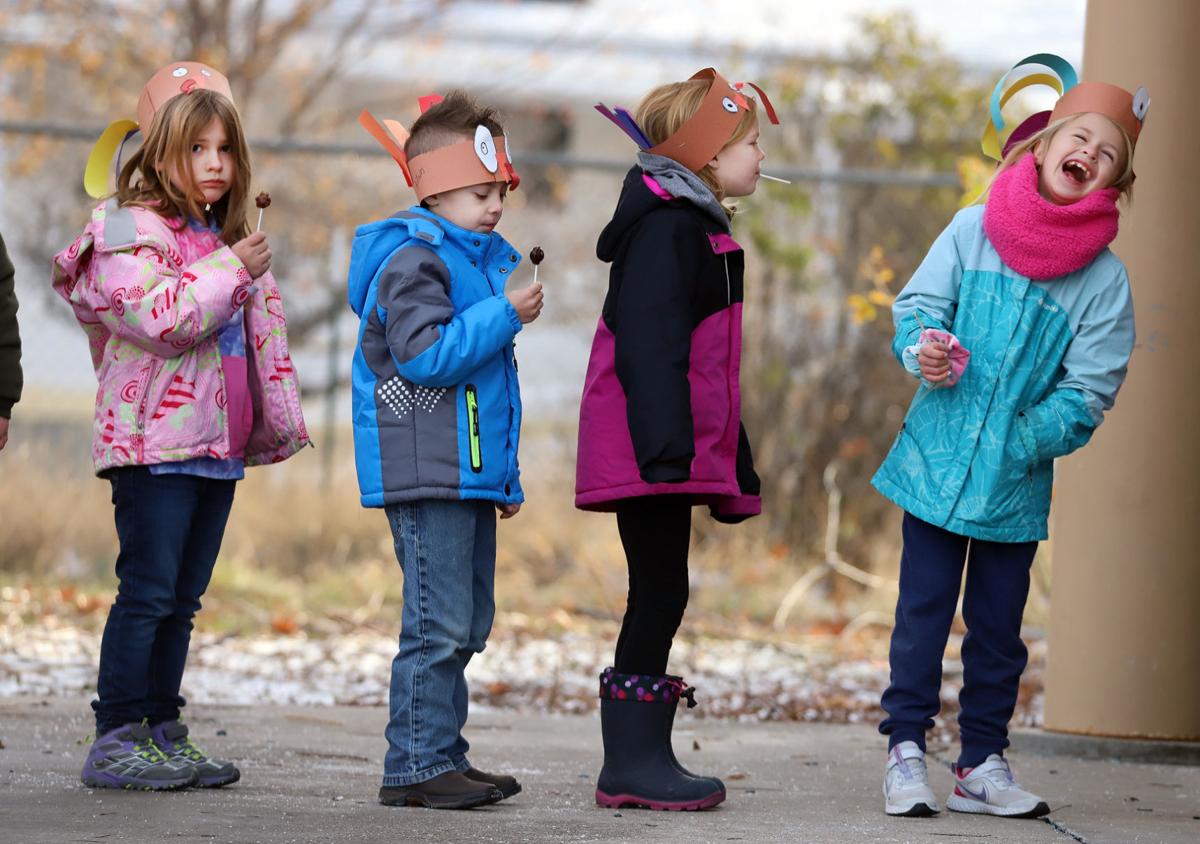 Moments after Victor first-grade teacher Sue Lane told her class they had filled up their hearts after delivering turkeys to Victor food bank for Thanksgiving and told them to give themselves a hug, Emma Hansen couldn't laugh as her classmates, Sarah Meske, Adam McConnell and Paisley Burnett looked on. 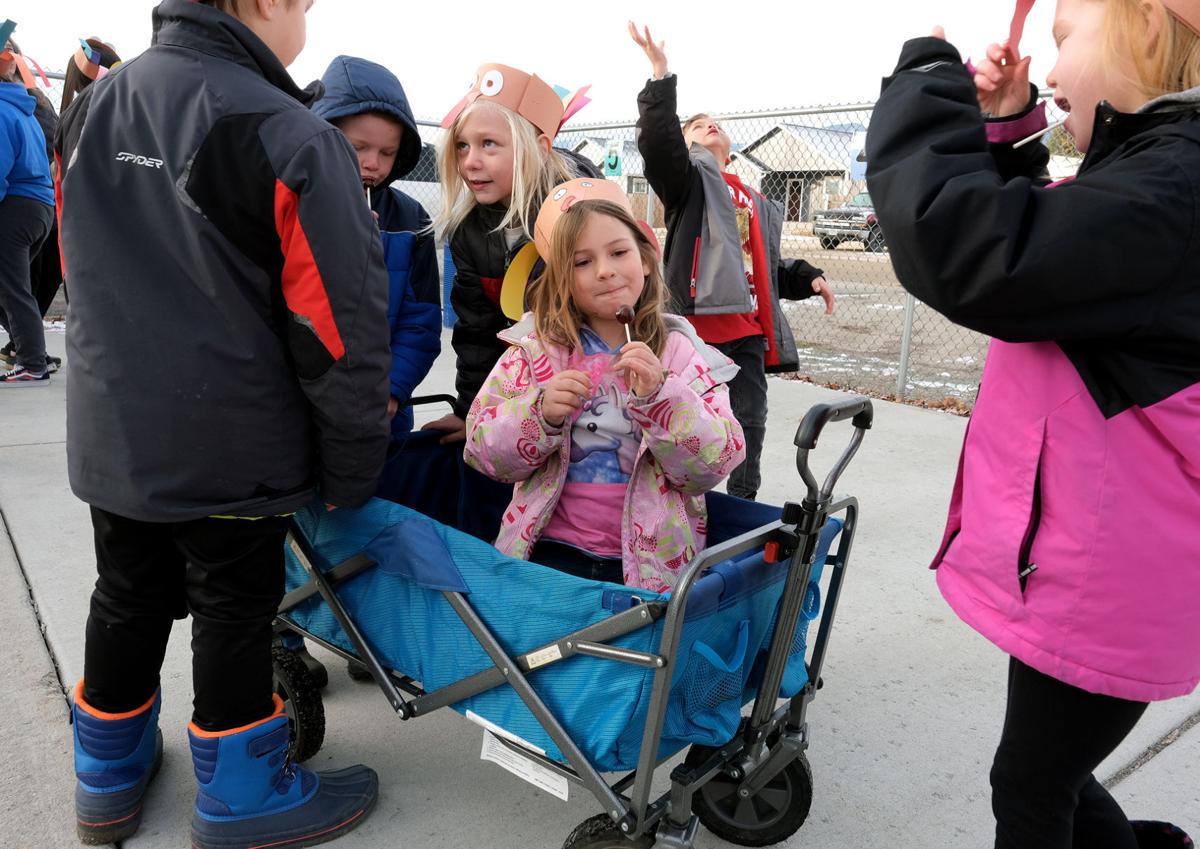 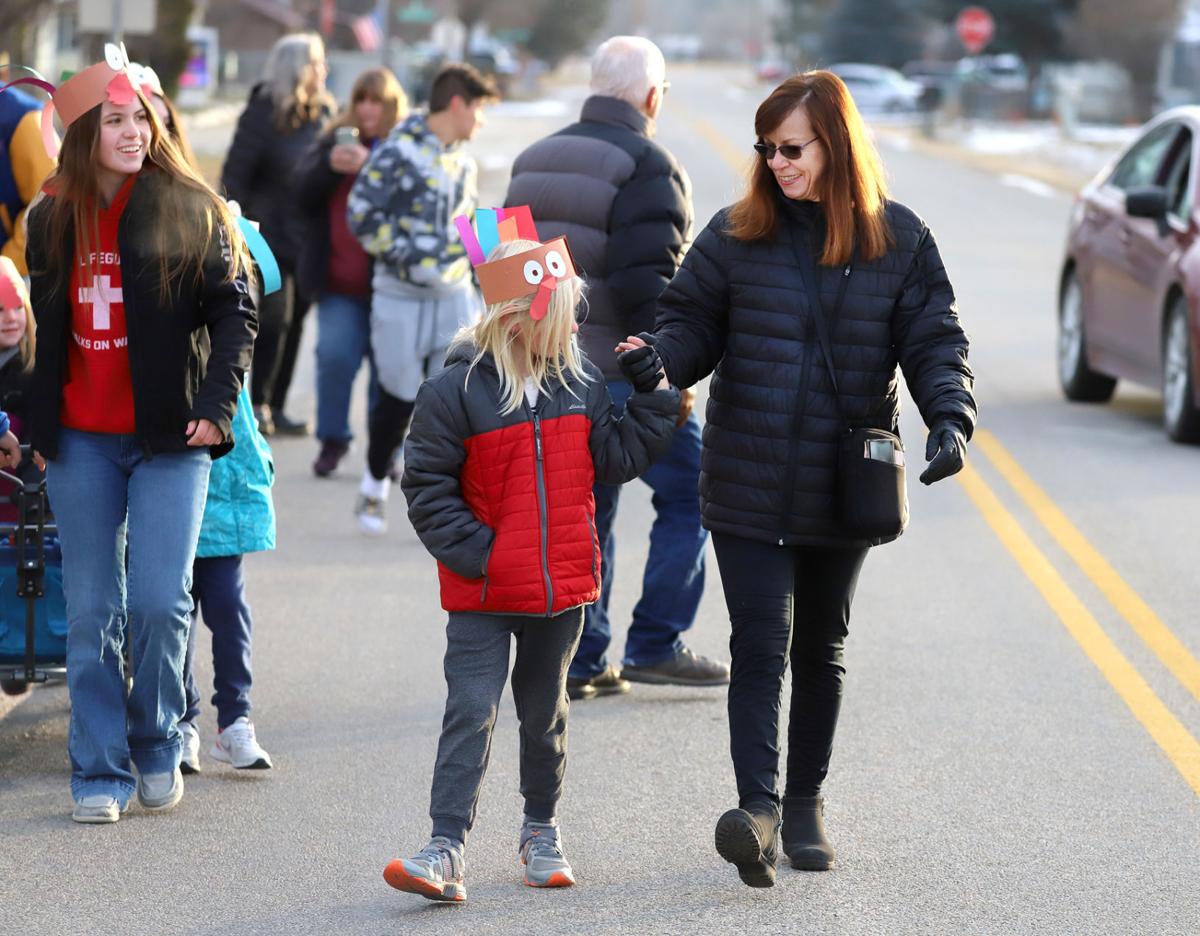 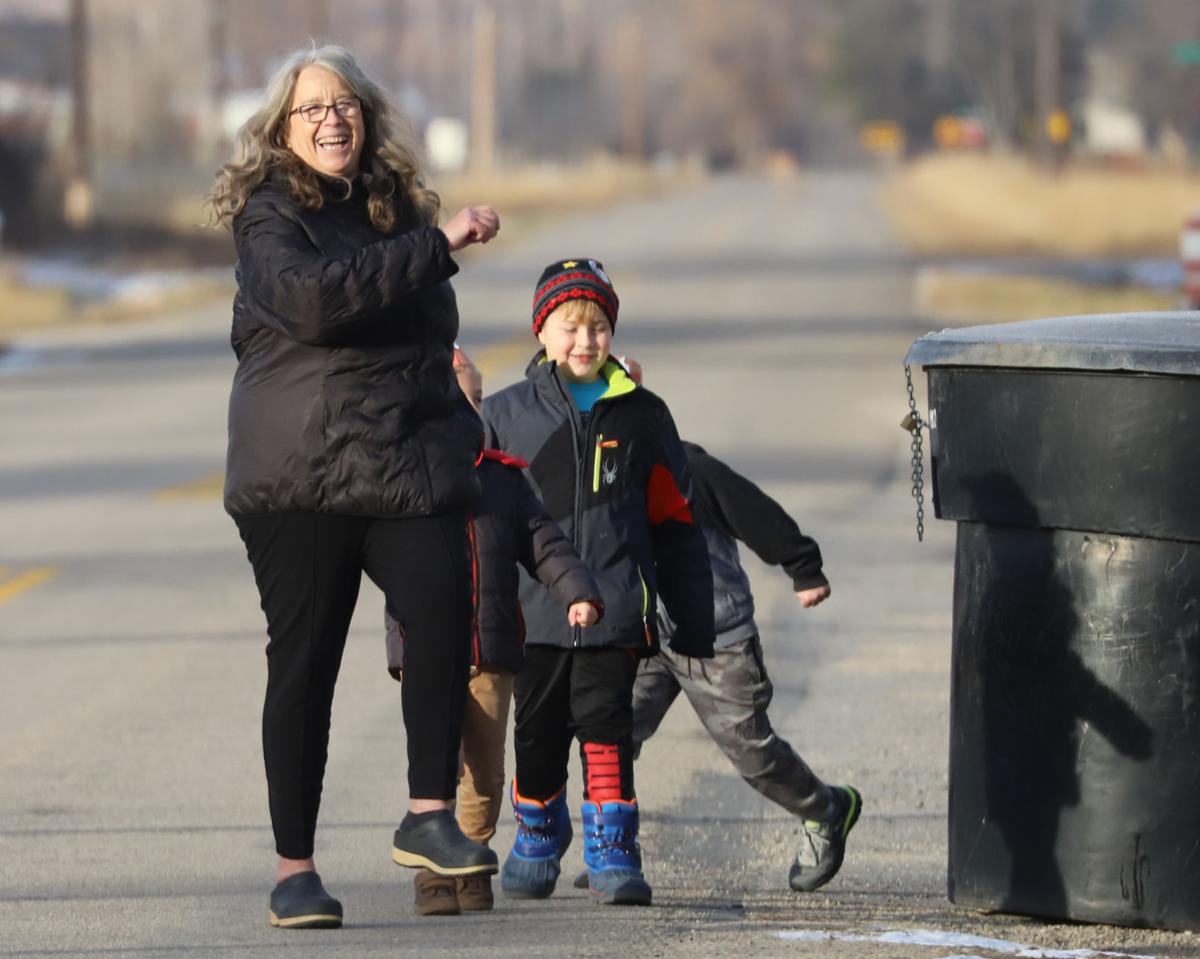 To the tune of "High ho, High ho, It's off to school we go," Victor first-grade teacher Sue Lane leads Jacob Sherwood and the rest of her high-stepping class back to the Victor Elementary School after delivering turkeys to the Victor food bank Thursday.

While the wagons were lighter than the years before, the smiles were just as big when the turkey brigade parade returned to Victor Thursday morning.

Sue Lane’s first-grade class gathered early around two wagons partially filled with frozen turkeys in the brisk morning air with a smattering of adults and high school “buddies” as they all prepared for the march to the nearby Bitterroot Valley Church of the Nazarene's food bank.

With the list of people hoping for a holiday meal getting longer every day, the food bank’s founders and chief volunteers, Bill and Roxanne Gouin, were happy to see the donated turkeys.

Just as important for them was the return of the youngsters who happily pushed the wagons down the street to the church.

Last year, due to the pandemic, the turkey brigade was put on hold and cash donations from the school came in an envelope.

“Bill and I have been doing this (the food bank) since 2013,” Roxanne Gouin said. “People do help us, but this time of year we do start feeling kind of tired. When we see those kids, it renews our spirits. We feel their energy, innocence and their willingness to want to do good.”

“They are the best part of humanity,” Bill Gouin said.

This is the seventh year that Lane’s classes have filled wagons with donated turkeys and delivered them to Victor’s only food bank.

“I think it helps them build on their sense of community and look beyond themselves,” Lane said. “It teaches them to care about others’ needs … I hope they will become people who want to take care of others and not want anyone to go hungry.”

Leading up to Thursday, Lane’s class has been making short advertisements on social media on why they believe that feeding people who can’t afford to buy food is important.

“One little boy said, 'It’s a good American thing to do,’” Lane said. “Little people think about themselves. This helps them think beyond themselves and consider other people’s needs.”

Victor High School junior Tia Allred was one of the class “buddies” who accompanied the first graders to the food bank. Years ago, she made the same trip as a kindergartner.

“I think this teaches them about sharing and helping people in need,” Allred said. “I think it’s a really important lesson.”

While Lane has received cash donations for the food bank, the number of turkeys her class delivered was down dramatically.

“It’s been hard for people to buy a whole turkey this year,” Lane said. “Finding one that’s small enough to afford has been hard too. I’ve had some teachers say they decided to give money this year because all of the turkeys left at the grocery store are huge.”

Lane’s class normally delivers between 100 and 150 turkeys to the food bank. This year the number was closer to 10.

“It's way different this year,” she said. “I can’t imagine having to navigate the economy right now if you have a family to feed.”

Gouin said the number of families hoping to receive a turkey dinner Monday, Nov. 22 between 9:30 and 11:30 a.m. is up from past years.

“So far, we’ve had over 100 people sign up this year for the holiday meal,” Gouin said. “Normally it’s closer to 70. We’ve never had so many people calling continually who need help this Thanksgiving. These are hard times for many families.”

On Thursday afternoon, the Gouins said they were still about 20 turkeys short of what they’ll need next week. If people want to help, they can mail cash donations to Bitterroot Valley Church of the Nazarene, P.O. Box 360, Victor, 59875 or drop a turkey by early Monday.

“We’ve never run out of food and we’ve never had to turn anyone away,” she said. “God has been really good to us. We’ve learned that He provides us with everything we need.”

The volunteers at Stevensville’s Pantry Partners are preparing for its first of two opportunities to provide people with special meals during the holiday season.

Homelessness is on the rise in the Bitterroot Valley. Advocates urge residents to look after the homeless and help them locate a warming shelter for this winter.

The wind in the Bitterroot Valley did plenty of damage on Monday, Nov. 15.

On a recent bluebird-bright sunny morning, the mesmerizing murmur of Rock Creek was interrupted by the staccato blast of a helicopter carrying a heavy load.

For the Ravalli Head Start families served by the program that matches generous community members with children in need, the Angel Tree is a godsend for their Christmas season.

Elk harvest down in Bitterroot, no general hunting extension planned

With one weekend left in Montana’s general hunting season, the elk harvest is trailing the five-year average at the Darby check station and in the region.

Penguins mail their Christmas letters to Santa at UK zoo

Penguins mail their Christmas letters to Santa at UK zoo

Moments after Victor first-grade teacher Sue Lane told her class they had filled up their hearts after delivering turkeys to Victor food bank for Thanksgiving and told them to give themselves a hug, Emma Hansen couldn't laugh as her classmates, Sarah Meske, Adam McConnell and Paisley Burnett looked on.

To the tune of "High ho, High ho, It's off to school we go," Victor first-grade teacher Sue Lane leads Jacob Sherwood and the rest of her high-stepping class back to the Victor Elementary School after delivering turkeys to the Victor food bank Thursday.