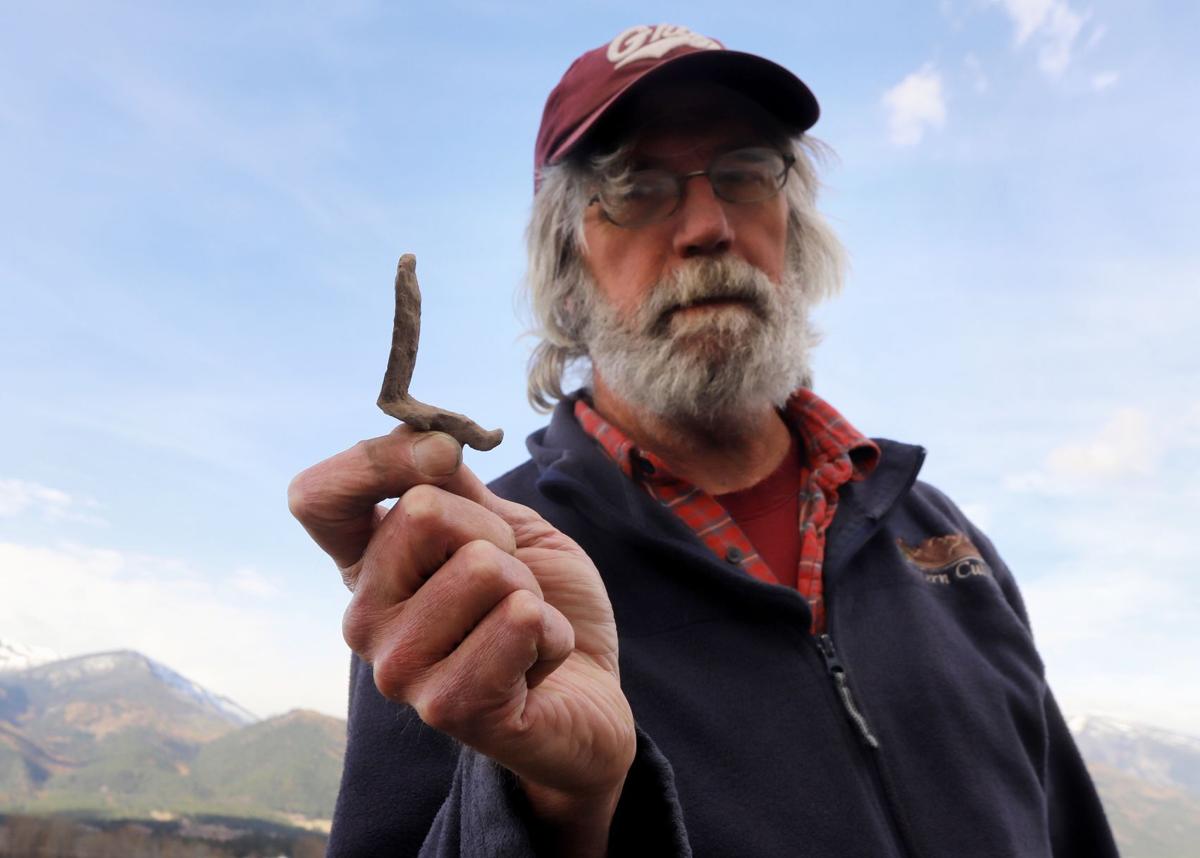 Dan Hall from Western Cultural of Missoula holds an L-shaped piece of steel called a frizzen — the piece of steel on a flintlock rifle that helped create the sparks that ignited the priming powder. Hall is leading a team of archaeologists to complete a cultural resources survey on land destined to become the new parking lot at Stevensville’s historic Fort Owen State Park. 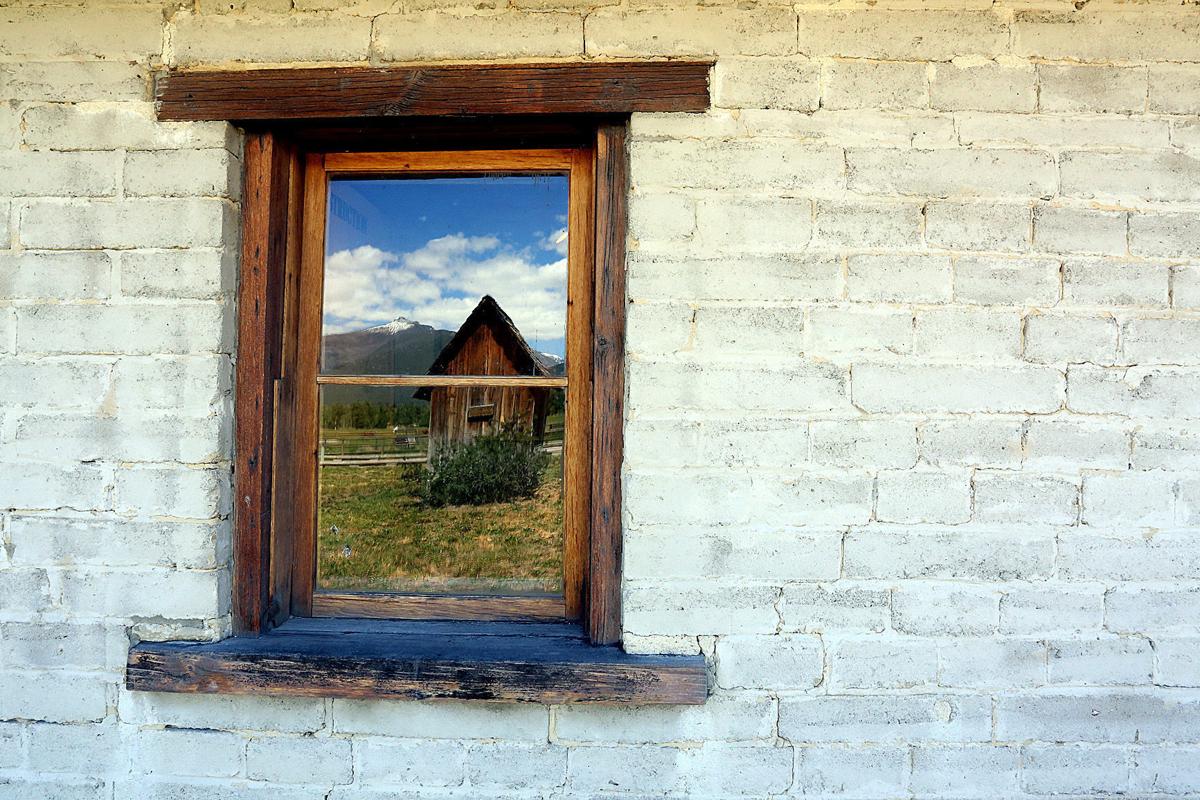 The buildings at historic Fort Owen just west of Stevensville will be restored and preserved following a $507,500 grant from the Helmsley Charitable Trust. 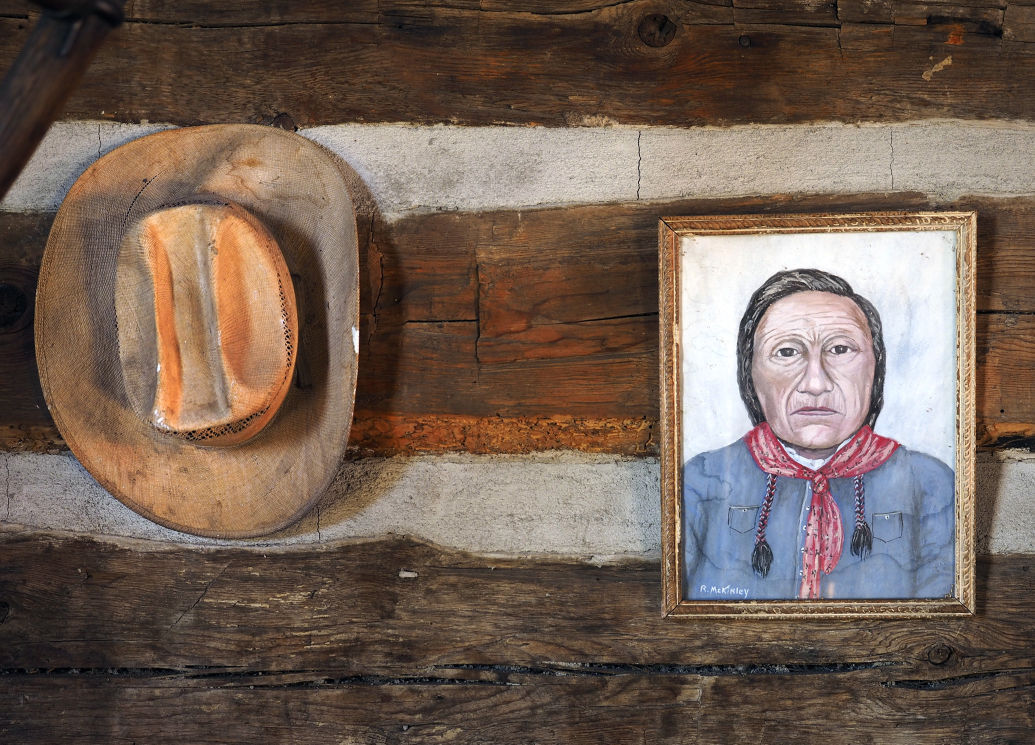 A hat and a painting by R.C. McKinley hang on the wall of the historic Wagner Cabin at Fort Owen State Park near Stevensville.

STEVENSVILLE — To anyone else, the rusted piece of L-shaped steel that Dan Hall held in his hand certainly wouldn’t resemble a historic treasure.

But for a man who has spent decades studying historic relics, Hall knew better.

Hall is leading a team of archaeologists from Western Cultural of Missoula to complete a cultural resources survey on land destined to become the new parking lot at Stevensville’s historic Fort Owen State Park.

That piece of steel was a frizzen — a word so long out-of-date that a computer’s spell check doesn’t even recognize it.

A frizzen was the piece of steel on a flintlock rifle that helped create the sparks that ignited the priming powder that, in turn, ignited the main charge of black powder in the rifle’s breech of the barrel that drove a projectile out of the muzzle.

Following a little bit of research, Hall was able to determine this frizzen came from Springfield Arms muzzleloader made sometime between 1835 and 1840.

“That puts it right in the early days of Fort Owen,” Hall said. “I did not expect to find that.”

That’s likely a refrain that’s often been repeated by those who happen to find their way to Fort Owen State Park and learn what they’ve stumbled across.

Hidden in plain sight, the 1-acre-state park is one of the most important sites of American settlement in Montana. That would come as a surprise to many of the thousands who drive right by it every day on their way back and forth from Stevensville and U.S. Highway 93.

Surrounded by private land and accessed via a long driveway into the local ranch, the site is one of the state’s hidden historic gems. For decades, that was almost by design.

The park’s current parking area is large enough for two cars, and one of them better not be a big truck. If a visitor happened to be pulling a camp trailer, then they might as well drive on by.

After decades of terse exchanges between the previous ranch owner, state officials and wayward travelers, there had been talk about somehow restricting access into the site that includes what may be the first adobe building constructed in the state.

And that’s just one of the many firsts found at the site. Before it was the state’s first permanent white settlement, it served as the home of the first Catholic Church in 1841. The state’s first sawmill, first gristmill, first agricultural development, first water right and the first school for settlers happened right there too.

Because of its access issues, only about 2,000 people a year come to visit this place where so much history was made.

That’s all about to change.

That change started when Myla Yahraus purchased the Fort Owen Ranch that surrounds the state park a couple of years ago. Yahraus let both locals and state officials know early she was interested in resolving the issue of access to the site.

With that door finally opened, local, state and private entities have stepped forward to looking to improve access to the park, increase public awareness of its historic significance, complete preservation and restoration work of the structures that remain and develop new interpretive displays for the park.

A $507,500 grant from the Helmsley Charitable Trust is expected to pay for the lion’s share of the improvements.

Coby Gierke of the Montana State Parks Foundation said the grant was the largest the foundation has ever received. Unlike many other granting organizations, Gierke said the Helmsley Charitable Trust only funds organizations that it invites to submit a proposal.

The organization has an interest in preserving historic places in the Northern Rockies.

“This opportunity really stood out for them,” Gierke said. “Fort Owen is the oldest continuously inhabited place in Montana. I’m certain they saw that as an important piece of history for the state.”

Montana Fish, Wildlife and Parks’ Regional Parks Manager Loren Flynn said the challenging situation at Fort Owen has been one officials have been trying to solve since the 1980s.

“It’s been on our radar for decades,” Flynn said. “It goes back literally generations of park managers. Because of the state’s lack of access and parking, it’s been very difficult, in good conscience, to encourage people to come here and visit.”

“And now we have the opportunity to elevate all of that,” he said.

Yahraus agreed to sell an acre on the south end of the park to the state. After Hall’s team of archaeologists complete the cultural review, it will be turned into a 14-space parking lot that will be large enough to accommodate school buses and camp trailers.

Stevensville Mayor Brandon Dewey said the opening of Fort Owen State Park will offer opportunities to provide education for youth as well as add another reason for people to come to explore the community.

“Tourism is a big source of funding for us,” Dewey said. “To be able to add another destination attraction for people to come and visit is something that we’re excited to see.”

The local nonprofit group called Friends of Fort Owen already have obtained a $30,000 RAPP Family Foundation grant to help pay for work at the historic site.

“This is opening the door for community support to grow,” said Friends of Fort Owen’s Margaret Gorski. “We want to see this become an asset for our community…It’s rather amazing what happens when people start to work together as a community.”

When the cultural resources inventory is completed, a draft development proposal will be made available for public review. The state legislature will need to sign off on the proposal.

With the robust group of partners and funding, Gierke said the future of Fort Owen State Park looks bright.

“As Montana Fish, Wildlife & Parks continue to look to enhance the Montana outdoor experience, these cultural treasures will remain critical,” said FWP director Martha Williams. “Fort Owen is part of our heritage and our story as Montanans. This funding and the generous support of the Helmsley Charitable Trust marks a significant step for the Bitterroot community and the key celebration of an important place in our history.”

Every year, tens of thousands of fish in the Bitterroot River make a wrong turn down an irrigation ditch that ends up costing them their lives.

On a spring-like day with a rainbow crowning the nearby Bitterroot Mountains, a small group of folk gathered around a bench to remember a man who left a long-lasting legacy in his beloved Hamilton.

As hundreds of thousands of people went to the polls Tuesday following the most contentious presidential campaign in recent memory, a dozen or…

Local food banks challenged by changes due to COVID-19

The annual turkey brigade in Victor and community party to fill Christmas food boxes in Stevensville have been canceled due to the pandemic this year.

ER docs: 'We are on the brink of disaster'

On Thursday, Corvallis barrel racer Chenessa McGraw will start her ride into the history books.

A Victor man charged with attempting to hide the vehicle that struck and seriously injured a man last January was sentenced Thursday to a suspended four-year commitment to Montana Department of Corrections.

After more than a quarter-century of debate and planning, the earth movers have arrived at the Ravalli County Airport in Hamilton.

Dan Hall from Western Cultural of Missoula holds an L-shaped piece of steel called a frizzen — the piece of steel on a flintlock rifle that helped create the sparks that ignited the priming powder. Hall is leading a team of archaeologists to complete a cultural resources survey on land destined to become the new parking lot at Stevensville’s historic Fort Owen State Park.

The buildings at historic Fort Owen just west of Stevensville will be restored and preserved following a $507,500 grant from the Helmsley Charitable Trust.

A hat and a painting by R.C. McKinley hang on the wall of the historic Wagner Cabin at Fort Owen State Park near Stevensville.