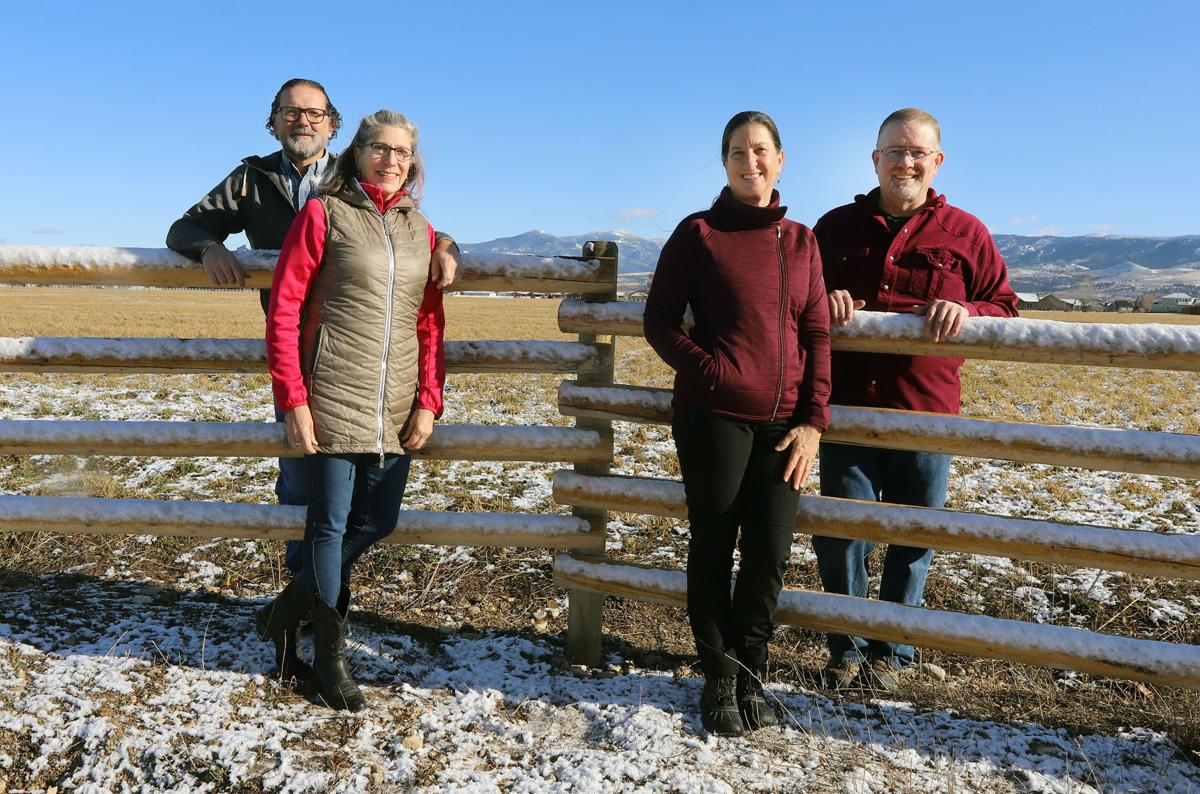 Peter Van Tuyn, Ilona Bessenyey, Kristina Bessenyey and Clint Adkins pose at what will become a popular stopping point along the new RAL Trail that will serve as a safe pedestrian and bicycle connector between Hamilton's Golf Course and Big Corral roads. The trail is named for 8-year-old Robert Anthony Leonardi, who died last year after being struck by a vehicle on Golf Course Road. 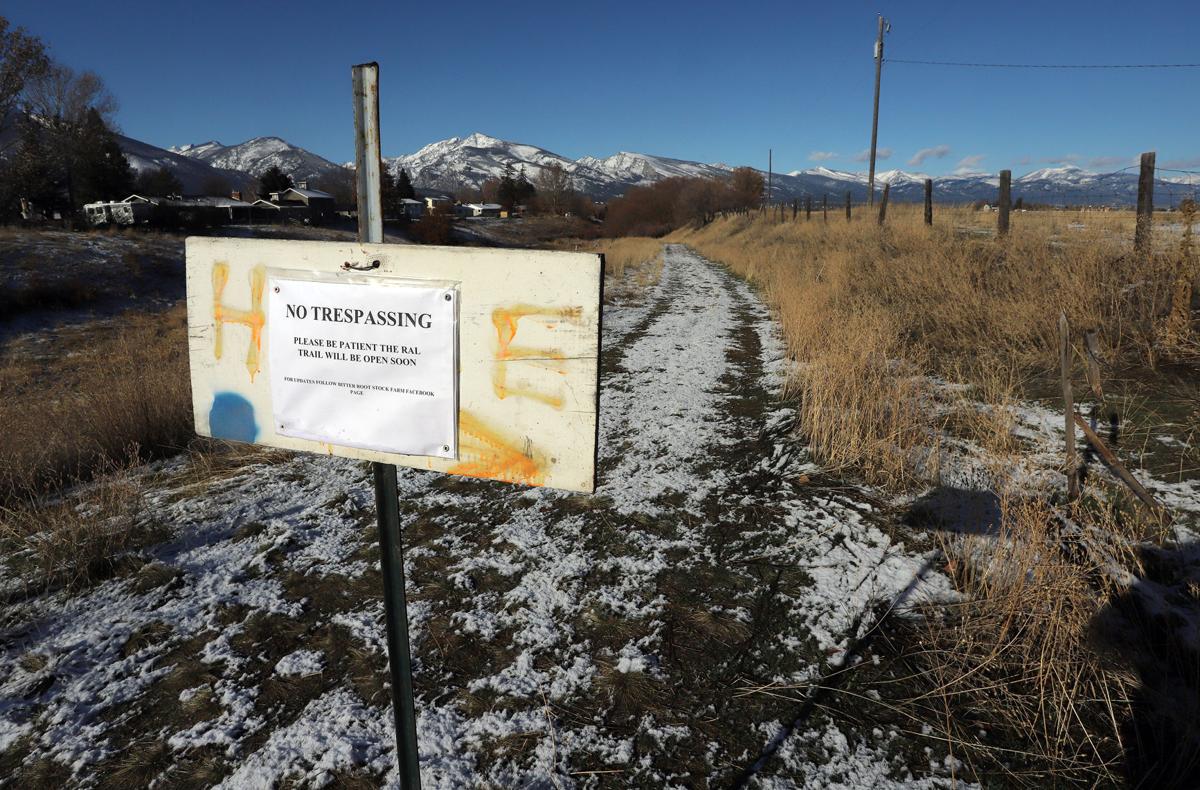 The new RAL Trail is expected to open to the public sometime before Christmas. The landowners are asking people to be patient and wait until all the improvements are completed before taking a walk or bike ride there.

Phil Leonardi yearns for a time when the view out his front door doesn’t fill him with heartbreak.

Through the generosity of a family with deep Bitterroot Valley roots and a supportive community, that day may be coming soon.

Very near the spot that 9-year-old Robert Anthony Leonardi lost his life in a hit-and-run crash on Hamilton’s Golf Course Road in July 2019, there’s an old dirt road that trails north toward a gully filled with cottonwood and willow.

There’s a no-trespassing sign there now that includes the sentences: “Please be patient. The RAL Trail will be open soon.”

People have already come to think of it as the rail trail — in memory of a young boy who always lived life full of joy, laughter and adventure.

Last week, Ilona Bessenyey joined her husband, Peter Van Tuyn, and sister Kristina Bessenyey and her husband, Clint Adkins, to ask the Ravalli County Commission for the encroachment permits will provide the public with access to the trail from Golf Course, Big Corral and Old Willow roads.

The mile-long trail winds its way along the edge of an agricultural field that’s been part of the historic Bitterroot Stock Farm for 135 years.

“We have always loved that field,” Ilona told the commission. “We’ve loved the copse of trees and all the deer and foxes that hang out there. It’s just been a wonderful spot that we’ve enjoyed for years.”

The trail runs along the edge of the field that is still used for pasture and raising hay.

For a long time, the family — including the third Bessenyey sister, Magrit Williams — has talked about about the potential of making that area available to the public while still maintaining their agricultural operation.

“Robert’s death last summer sort of galvanized all those thoughts and spurred us into action,” Ilona said. “We realized that since the field was kind up on the bluff, there was these lovely fringes where we could have a trail.”

They reached out to the neighbors who might be affected and were met with nothing but positive responses. When they explained their idea on the Bitterroot Stock Farm Facebook page, their page views jumped to 10,000. When they asked for help, volunteers of all ages turned out to donate their time and muscle.

When people learned the family planned to meet with the county commission, they flooded the commissioners’ email boxes with letters of support.

“We have been indescribably impacted by the loss of Robert,” she wrote. “I miss him everyday. I miss seeing him ride his bike (rain or shine), I miss him opening the door, kicking off his shoes and saying hi and then running downstairs to hang out with my son…Robert was full of joy, laughter and adventure — our nine years growing up with him were a gift.”

“This trail is a wonderful chance to honor his memory, as well as a start to keeping the numerous kids that live in this area safer as they walk and bike,” Dufresne wrote.

Brittany McKenzie wrote that her family has been part of the small army of community volunteers who have helped on the project.

“This trail begins very near to where he (Robert) took his final breath and is a wonderful way to remember him and to both honor Robert and his family,” McKenzie wrote. “Each time we have helped, my husband, my son (age 8) and I have remarked on what an amazing community we live in and what an amazing project that this is. This project was dreamed up by the landowners and has been actualized by the landowners, the Leonardi family, nearby neighbors, and the community.”

“This project really exemplifies how we can come together to support one another and the create something for the good of all,” McKenzie added.

Ravalli County Commissioners Chris Hoffman and Jeff Burrows offered their support and voted to allow the encroachments. They also said they would seek funding necessary to purchase flashing signs for the new pedestrian crossing at Golf Course Road.

Van Tuyn said the goal was to create a trail where two bicyclists could pass without stopping. The trial needed to be at a gentle enough slope for young children to ride.

There will be times when the family will need to close the trail temporarily, including haying season, when deer are dropping their fawns and when the trail becomes too muddy. The landowners will require the public stay on the trail and not wander across private land.

The trail is expected to officially open to the public sometime before Christmas.

“We’re just really hopeful that this is something that will work for everyone,” Bessenyey said. “It’s really been exciting. It took a little bit of a leap of faith to make the decision to move forward…and the community followed. The support from the community has been wonderful.”

“We can’t fix things that have happened in the past,” she said. “Our hope is create a safe way for people to get from point A to point B and have some fun along the way. That seems to have been Robert’s motto too. If we can bring joy into this process and be able to do it in a safe way, that’s what has motivated us all along.”

The Leonardi family has felt that joy and support from the community too.

“We weren’t looking for anything,” Phil Leonardi said. “They (the landowners) came to us with the idea. We talked to our neighbors and friends. They all were incredibly supportive. They turned up after work to volunteer their time and beat themselves senseless with a Pulaski.”

Leonardi said he and his daughter, Meyrn, recently went for a walk on the trail.

“We were kind of reflective on the way back,” he said. “We miss Robert so badly. What this does is allow us to cross the street. We have to cross right where Robert died and it helps us. It does.”

The community has wrapped its arms around the Leonardi family since the tragedy.

“As I look back and reflect on it, from Robert’s passing there have been people coming to us — his service, tetherball, basketball hoops and all the well-wishes that we still get today.”

“The holiday season is not a pleasant time,” he said. “But we’re able to look back and say ‘hey, we’ve had all these people who care.’ You don’t know what the future holds, but then another thing like this comes up — another positive moment — and you just say ‘man, they haven’t forgotten about us. We’re not alone.’”

“This is a hard place to live in a way because there’s a pretty bad memory outside our door,” Leonardi said. “This will help alleviate that a little bit…When I look out my window now, I’m going to see people out there enjoying their lives. There was a time when I looked out that window and it wasn’t that.”

Hunters took advantage of some good tracking snow, elk movement and the annual deer rut to get some meat for the freezer last weekend in the Bitterroot Valley.

After more than a quarter-century of debate and planning, the earth movers have arrived at the Ravalli County Airport in Hamilton.

A successful fundraising campaign in October helped restart a campaign that will eventually lead to a new Cancer Infusion Center at Hamilton’s Marcus Daly Memorial Hospital.

The angels have landed on Hamilton's Angel Tree

This is the ninth year that Hamilton’s Massa Home Center has been home for the community Angel Tree.

Santa is going to need lots help to ensure that every child’s hopes for Christmas come true in Stevensville this year.

Peter Van Tuyn, Ilona Bessenyey, Kristina Bessenyey and Clint Adkins pose at what will become a popular stopping point along the new RAL Trail that will serve as a safe pedestrian and bicycle connector between Hamilton's Golf Course and Big Corral roads. The trail is named for 8-year-old Robert Anthony Leonardi, who died last year after being struck by a vehicle on Golf Course Road.

The new RAL Trail is expected to open to the public sometime before Christmas. The landowners are asking people to be patient and wait until all the improvements are completed before taking a walk or bike ride there.