Wild-card weekend: Updates and scores from the NFL playoffs

The county also recorded its second death due to complications from the coronavirus Tuesday after a Hamilton man in his 60s died at a Missoula hospital.

“In this case, there is a husband and a wife,” she said. “One recovered and one didn’t. What is the rhyme or reason for that, we don’t know. I am sure that when they started the summer, this wasn’t on their agenda.

“When I look at the picture of this person, it’s consistent with what we’re seeing in other places that helped create the guidelines that we are currently working under,” Webber said. “This is exactly what’s happening and playing out in the rest of the world.”

On Wednesday, Webber was encouraged to see the number of active cases in Ravalli County drop to seven. None were hospitalized.

Thursday marked the third straight day of no new cases in the county and active cases dropped to six.

While Webber said she can’t scientifically pin that drop in cases on Gov. Steve Bullock’s mask directive that has now been in place for 29 days, she thinks that fact is something people should consider.

“From my perspective, it’s been four weeks since the mask directive, which is two incubation periods,” Webber said Wednesday. “We are now at seven active cases. That’s the first time we’ve been under double digits since the beginning of June.”

Early on in the pandemic, Webber remembers being in the minority when she wore a mask in public and how awkward it felt.

“And now, in many places, it seems like it is the people not wearing a mask who are in the minority,” she said.

In Ravalli County, Webber said most of Ravalli County residents who have contracted the virus have recovered in about 10 days. Others have become very ill, including some for long periods.

One man told her there were times that he wished he had died after suffering fever and pain day after day.

“He could barely string two sentences together because he was so short of breath,” she said.

When Webber takes a look back on the COVID-19 cases she’s worked in the county so far, the people who seem most likely to struggle in Ravalli County have been diabetic.

She’s also seen the scenario of a household where one partner tests positive and the other negative for COVID-19, but both have symptoms of the illness. The person who initially tests negative gets sick and ends up needing medical attention.

“They continue to test negative until they are about to get out of the hospital and then they test positive,” she said. “I have seen this happen more than once. It’s unpredictable.”

In Hamilton, city, county and school officials have supported the governor’s face covering directive over the last week.

On Wednesday, the Ravalli County Board of Health approved a letter in support of the directive after several hours of discussion.

Health Board member Roger De Haan of Victor said the decision to write the came after the board — which includes two medical doctors and a nurse practitioner — reviewed information that showed the spread of the virus can be slowed by a community wearing face coverings.

“We are not suggesting that anyone should get arrested or there be some civil action if people don’t wear a mask,” De Haan said. “It’s just the neighborly thing to do if you want to take care of your neighbors and family.”

The Hamilton School District passed a draft mask policy last week that will require all adults and students to wear masks when on school grounds, with the exception times identified for eating and for outdoor “mask breaks.” Masks will also be required for students on school buses. 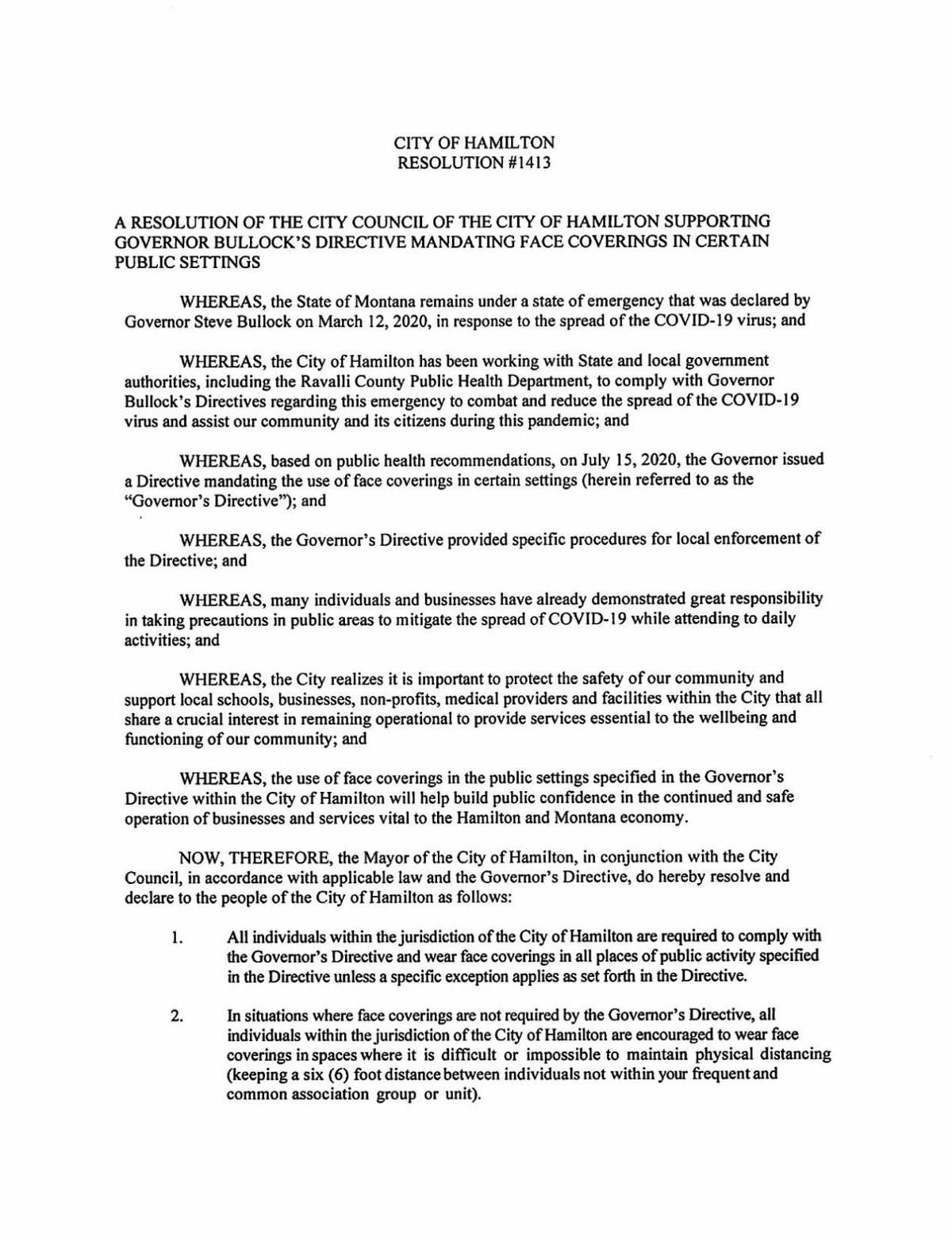 Last week, the Hamilton City Council passed a resolution that said “all individuals within the City of Hamilton are required to comply with the Governor’s Directive and wear face coverings in all places of public activity specified in the directive … . ”

Hamilton Mayor Dominic Farrenkopf said the resolution was not a change in the city’s position.

“The city never had a different position about the governor’s directive,” Farrenkopf said. “The city has always recognized and supported it. … With all the information out there, it’s easy to get confused on what you can do and what you can’t.”

After a month of the directive being place, Farrenkopf said he’s not received reports of any issues that people haven’t been able to resolve among themselves.

“We encourage people to continue to work things out with their neighbors,” he said. “I feel like we’re into this four weeks now and everyone should be on board by now. I think people are doing the best they can.”

Farrenkopf said the city’s focus now is on projects that need immediate attention.

“We are ready to keep working for our residents,” he said. “There are a lot of services we provide for the city of Hamilton. We don’t want that to stop. We don’t an interruptions of those service. … There are so many projects that we’re working on right now that we don’t have time to get hung up on the mask issue.

“There have been so many things about this that have been hard to adjust to,” Farrenkopf said. “We just need to keep doing our work. I feel like that’s the best thing that we can do now. When the answer comes, we’ll be ready for it and embrace it so we can all get back to normal.”

Victor's new fire hall was completed about the same time that COVID-19 shut everything down, which precluded any chance for a grand opening ceremony of any sort.

This fall’s general election in Ravalli County will likely be held through mail ballot and in-person early voting.

Victor couple's Sunday hike turned into a firefighting effort that kept an abandoned campfire from spreading in the Glen Lake area.

Bitterroot's 'mountain goat' still has a tower to climb, a record to break

The man that many in the Bitterroot Valley have come to know as “the mountain goat” has his eye on a world record for the being the oldest person to climb Wyoming’s imposing Devils Tower.