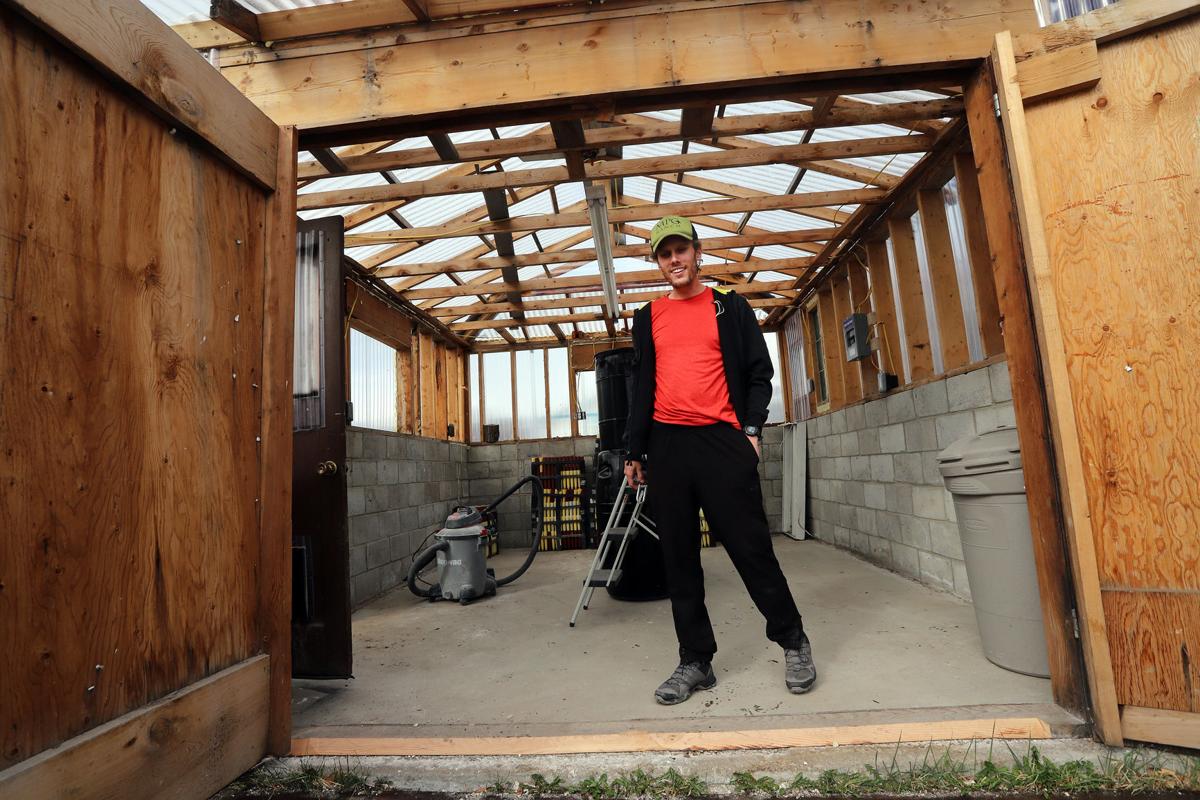 Josh Wilson stands inside the Ravalli County Weed District's new greenhouse that will soon be filled with pots containing a number of different native plants. Wilson is the district's new Bio-Control Program Leader and its newest full-time employee. 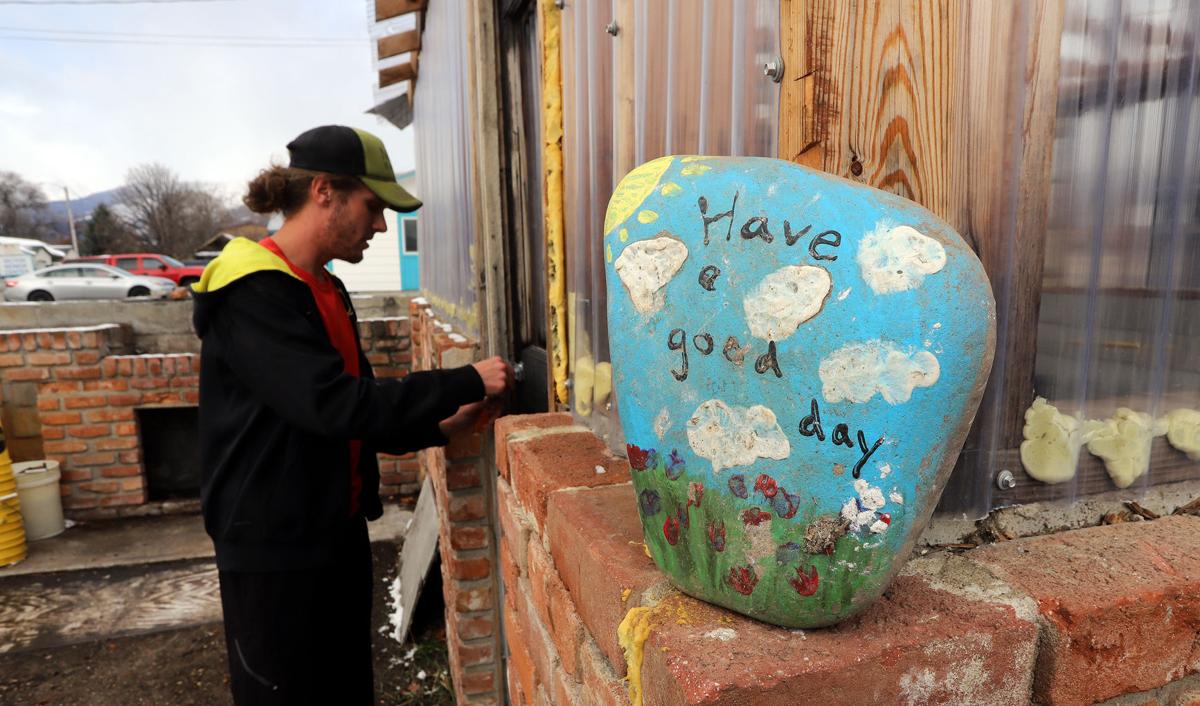 Ravalli County Weed District Bio-Control Program Leader Josh Wilson locks up the district's new greenhouse. Wilson is excited about plans to turn the old Victor firehall property into the center of county's weed fighting universe with opportunities to raise weed-eating bugs and a native plant garden that can offer a variety of educational opportunities.

When it gets warm and plants start popping out of the ground, the telephone at the Ravalli County Weed District begins to ring.

A lot of the people on the other end of the phone are already starting to think about getting their bugs.

Most are after Cyphocleonus achates.

The brown-mottled spotted knapweed weevil is a favorite for folks already dreading the rise of the noxious weed once so prevalent in Ravalli County that it turned tinged fields purple and earned the nickname "Bitterroot alfalfa."

That was before the storied Montana State University Agricultural Research Center researcher named Jim Story led the effort to develop biological controls for different noxious weeds, including knapweed. He discovered the weevil that snacks on knapweed roots is the most effective at controlling the weed.

His first shipment of 50 adults arrived in 1988. In 2004, weevil populations exploded and knapweed patches shrank. For a time, the weed nearly disappeared but they left behind a bank of seeds that can last for 15 years.

Once the knapweed was gone, the number of weevils dried up too.

A resurgence of knapweed has led to increasing demand for a supply of weevils that’s handpicked every year by sharp-eyed teenagers employed as part of the weed district’s Bitterroot Bio-Control Cooperative Youth Program. The young crew is also adept at capturing other bugs that hone in on different weeds around the valley.

“A lot of people like the idea of bio-control,” Morris said. “It’s a natural way to control noxious weeds. I think there are quite a few scared of herbicides. And there are a lot of sensitive areas like next to water or your garden that you don’t want to use herbicides.”

“People are looking for that alternative that these bugs have to offer,” she said. “They have absolutely been a success story here in the Bitterroot.”

That demand for bio-control led to Morris’ decision last fall to hire Josh Wilson as the department’s full-time Bitterroot Bio-Control Program leader. His position is completely funded through grant monies.

Wilson joins Morris’ small team of weed fighters at their relatively new location at Victor’s old firehall in the center of town. They have big plans for the property. Some are already underway.

On a recent morning, Wilson offered a tour that included a quick look at native plants sprouting under grow lights in one of the truck bays and a greenhouse that’s about ready to do its part in getting the plants large enough to sell.

Plans also call for building an insectarium where the weed district will be able to raise its own batches of weed-eating bugs. There will also be a garden space where the public can take a look at a variety of noxious weeds and the native plants that can replace them.

“We have some really big long-term plans for this place,” Wilson said. “Whatever we can raise here will go right back into the program. We have a lot of work to do to make it happen.”

The county’s weed department counts on grants and donations to keep the doors open. Some of that funding comes from the bugs the bio-control team collects.

Last year, Wilson said the team collected about 8,000 Dalmatian Toadflax stem weevils, 20,000 Leafy Spurge flea beetles and close to 59,000 spotted knapweed weevils that were packaged up and provided to landowners. The commercial value of those bugs was about $96,000.

By far, most of the district’s funding comes through grants provided through the Montana Noxious Weed Trust Fund Grant Program. The program was established by the legislature in 1985 to provide funding for noxious weed research projects, state and community education/development projects, and local cooperative landowner cost shares.

Ravalli County’s weed district received $139,187 in grants that ranged from $28,766 for its youth bio-control program to $65,000 to hire a strike team to battle a relatively new invader called Rush Skeletonweed.

Over the last eight years, Ravalli County’s weed district has been awarded about $1.4 million from the trust fund.

“That was a serious win for noxious weeds in Ravalli County,” Morris said.

Community volunteers are getting their hands dirty to help protect Hamilton’s newest park along the Bitterroot River.

A provision of the $1.9 trillion American Rescue Plan will mean lower healthcare premiums for some enrolled through the federal Health Insurance Marketplace.

After two burglaries and some vandalism last weekend, Ravalli County Fairgrounds officials have decided to lock the gates evenings and weekends starting Monday.

Construction set to begin on Eastside Highway south of Stevensville

A project to improve the Eastside Highway south of Stevensville officially gets underway Wednesday.

Bold and beautiful, falcons hold a special place in the hearts of people.

Weed of the week: Don’t confuse rush skeletonweed and dandelions

In its early stages of growth Rush Skeletonweed can be confused with Dandelions as the rosettes look awfully similar.

Josh Wilson stands inside the Ravalli County Weed District's new greenhouse that will soon be filled with pots containing a number of different native plants. Wilson is the district's new Bio-Control Program Leader and its newest full-time employee.

Ravalli County Weed District Bio-Control Program Leader Josh Wilson locks up the district's new greenhouse. Wilson is excited about plans to turn the old Victor firehall property into the center of county's weed fighting universe with opportunities to raise weed-eating bugs and a native plant garden that can offer a variety of educational opportunities.