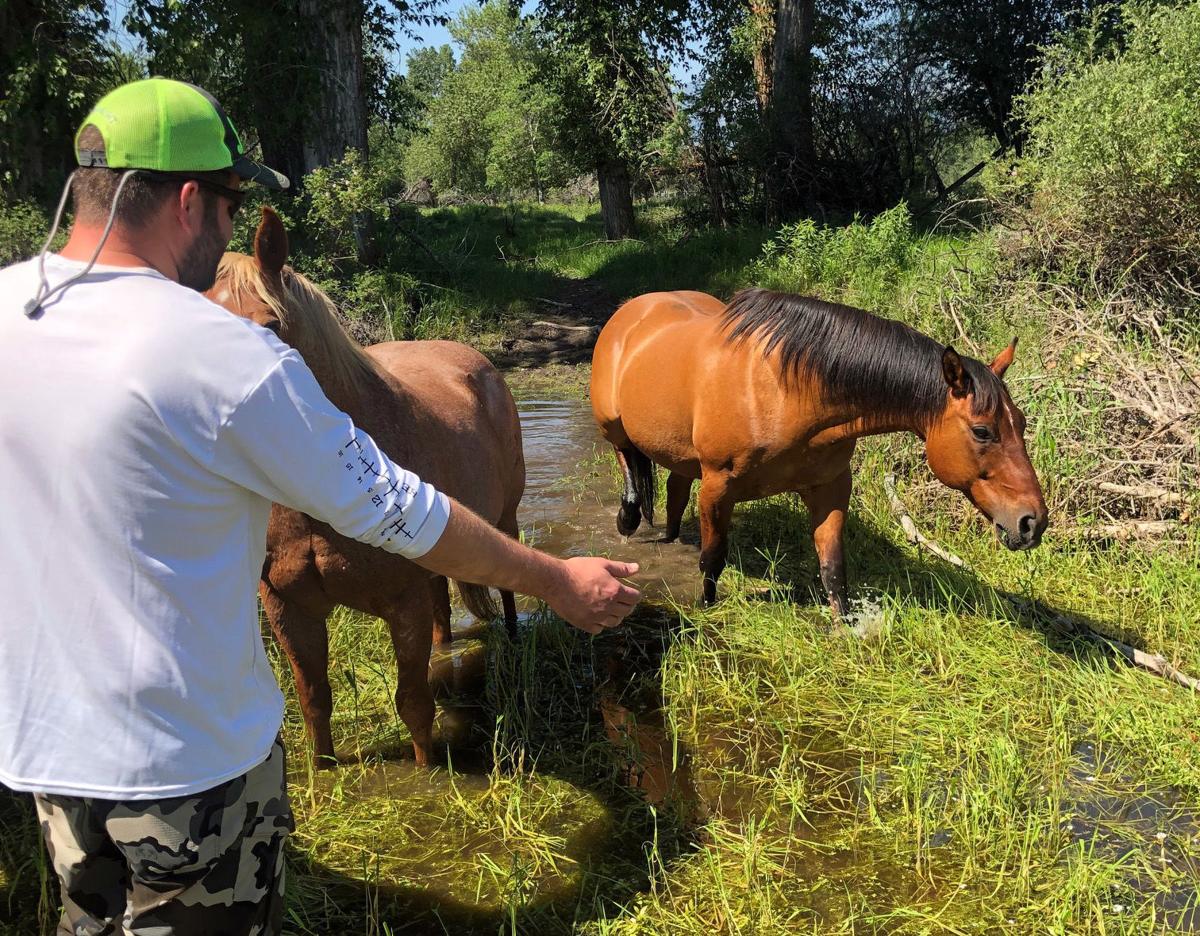 Matthew Eickholt says hello Tuesday to the horse he and his wife, Christina, saved from drowning on Father's Day. The couple were floating with their son and Eickholt's parents when they spotted the horse struggling in a deep pool. They helped coax it into shallower water. 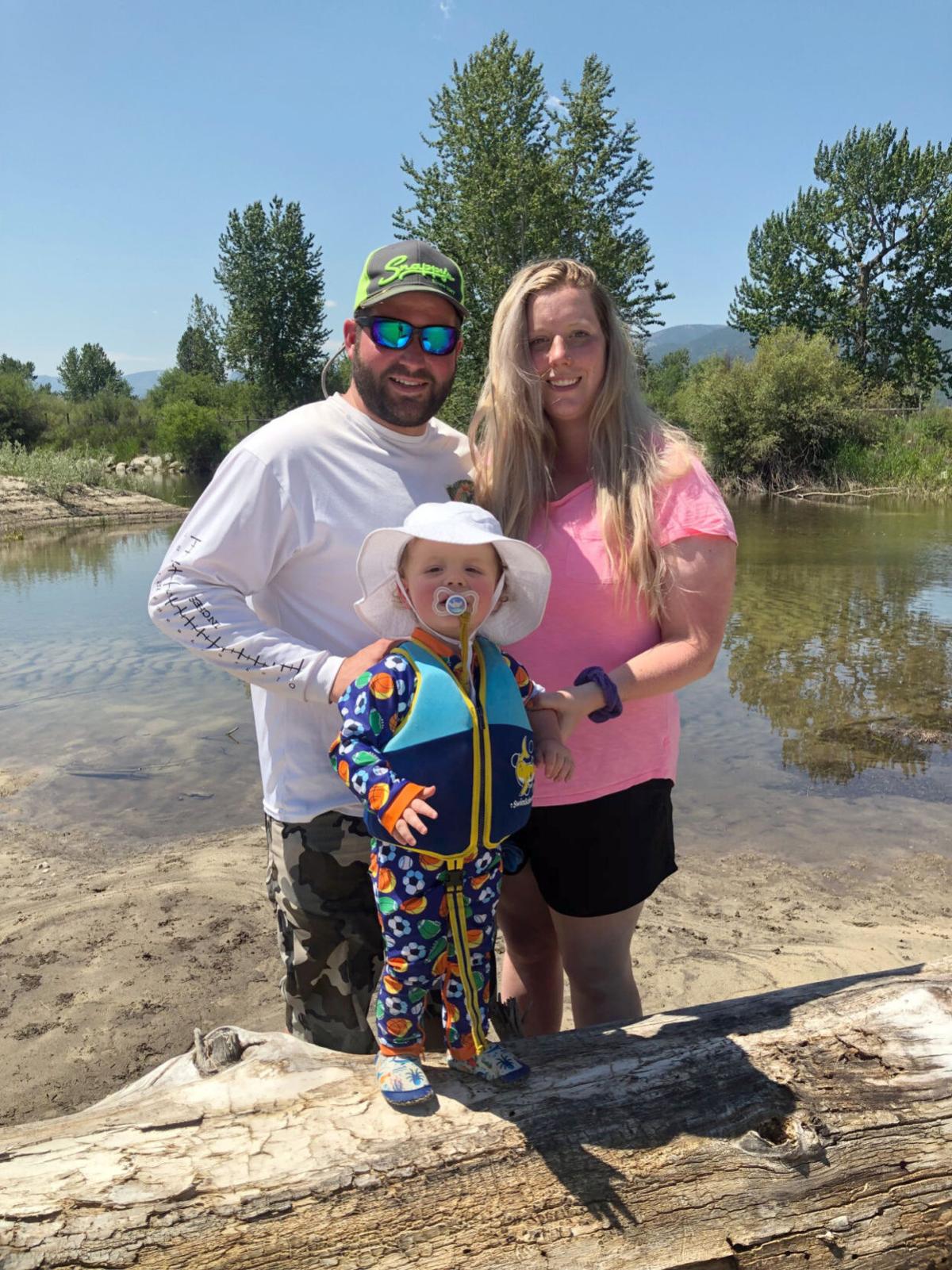 Matthew and Christina Eickholt pose with their son, Arlo, downriver from the spot the couple helped save a drowning horse on Father's Day.

Accompanied by their young son, Arlo, Matthew and Christina Eickholt planned a leisurely float with Matthew’s parents down from Bell Crossing.

That’s exactly what it was until they noticed some splashing near shore.

It took a few seconds for them to realize it was a horse that was fighting the current as it tried to get out of the river near a bank too steep for it to navigate.

“It was pretty much going underwater,” Matthew Eickholt said. “We could see that it was definitely drowning.”

They think the horse could have ventured too close to the riverbank, which may have given way. The water was about 10 feet deep and the current was strong. It couldn’t get its feet on solid ground so it could get out.

“He was breathing super heavy,” Eickholt said. “Its eyes were all bugged out. At times, all we could see was its teeth above water. It was snorting. I think it may have been 30 seconds to a minute from going under.”

After pulling into shore, the Eickholts jumped out of the raft and ran to a shallower spot just downstream of the horse.

“We started clapping and yelling,” Matthew Eickholt said. “We were able to coax him to come downstream. When he saw us, I think he knew we were there to help him. Once he got to us, he was able to pull himself out of there.”

“He was a super nice horse,” he said. “It turned out to be a pretty wild rafting trip. We were all so happy that it turned out the way it did. If it had gone the other way, it would have been a pretty miserable float.”

On Tuesday, the Eickholts were floating the same stretch with Christina’s parents.

They spotted the same horse near the river and they pulled over to say hello.

“The horse remembered us and came running up to us with his two friends,” Christina said. “They weren’t very close to the edge when we saw them. I was happy to see that. We’re all glad that it ended the way it did.”

As biologists consider proposals to stem the tide of steep brown trout population declines in southwest Montana, the situation in the upper reaches of the Bitterroot River couldn’t be more different.

A Hamilton man faces felony DUI and criminal endangerment charges after cutting across three lanes of traffic before driving his pickup truck into a pond north of Victor Monday afternoon.

A Florence man who allegedly fled in a stolen vehicle at speeds that neared 120 mph and then led law enforcement officers on a prolonged foot chase in May was charged Wednesday with felony theft and multiple misdemeanors.

A project that aims to open up grasslands and provide more forage for big game on the popular Calf Creek Wildlife Management Area will move forward, but without as many machines or reopened roads.

Matthew Eickholt says hello Tuesday to the horse he and his wife, Christina, saved from drowning on Father's Day. The couple were floating with their son and Eickholt's parents when they spotted the horse struggling in a deep pool. They helped coax it into shallower water.

Matthew and Christina Eickholt pose with their son, Arlo, downriver from the spot the couple helped save a drowning horse on Father's Day.