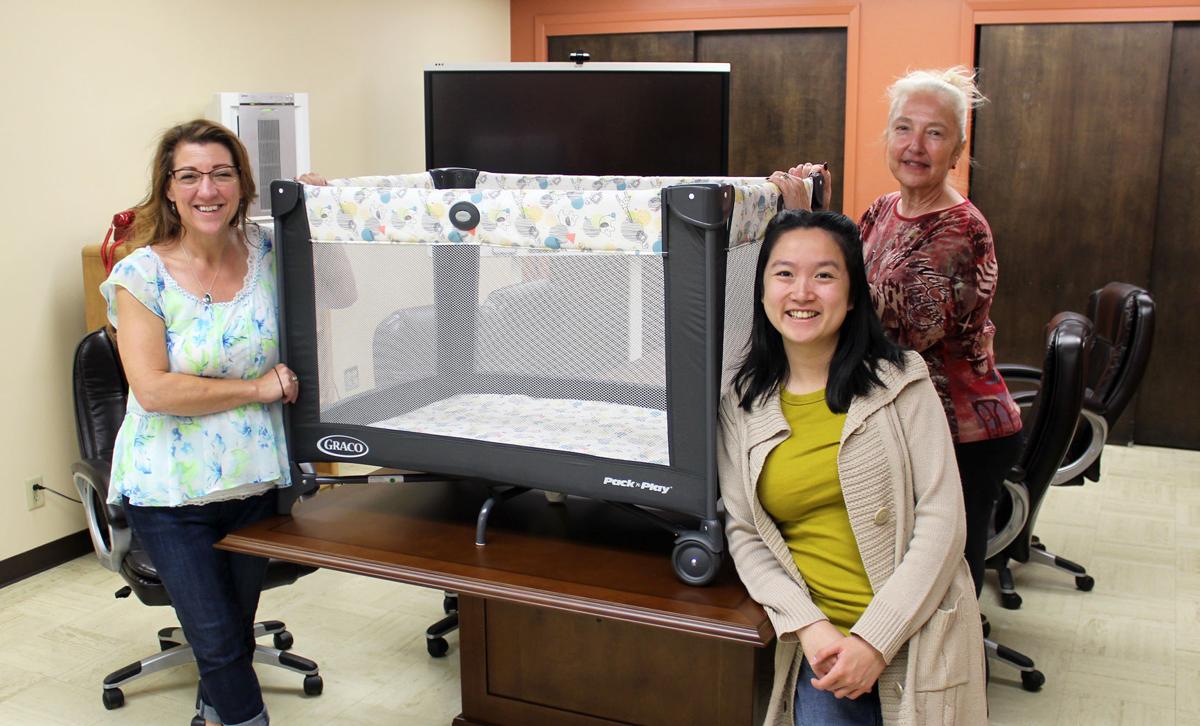 Ravalli County Public Health director Tiffany Webber, office assistant Zoe Alford and vaccine manager Lori Rodrick with one of many free cribs that are part of the “Back to Safe Sleep” program. 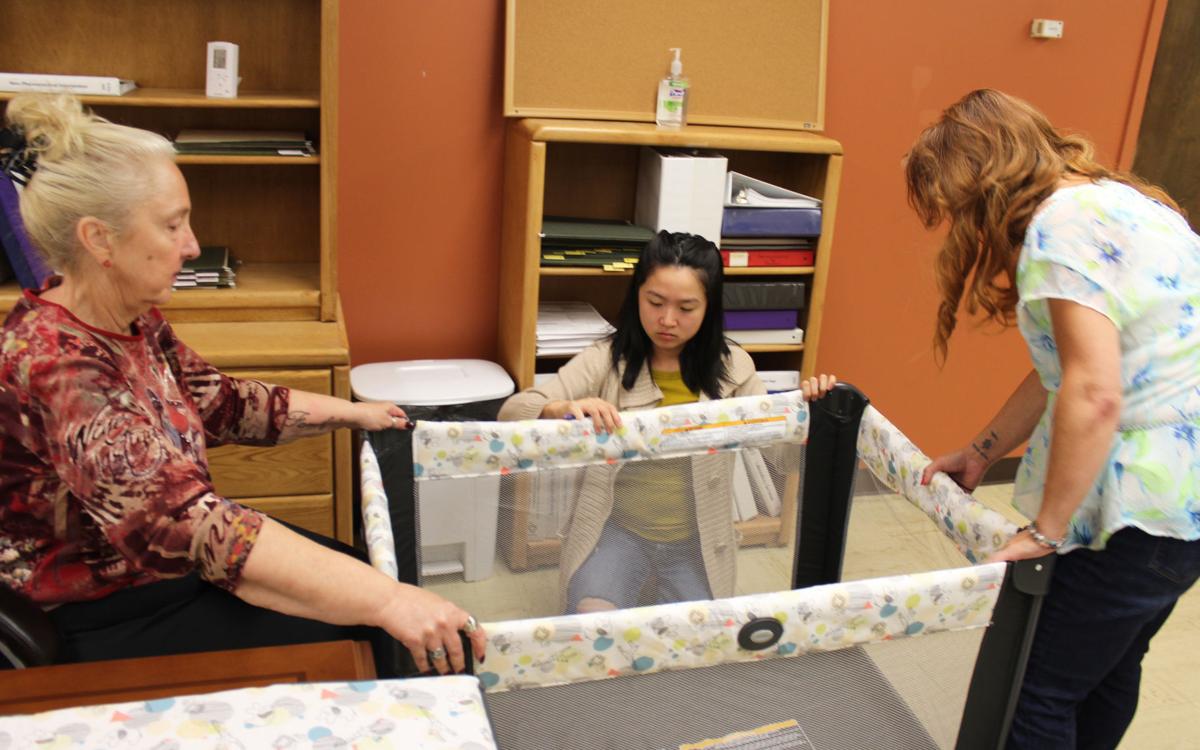 Ravalli County Public Health employees set up one of the free cribs.

“Last year and this year we have been promoting the ‘Back to Safe Sleep’ and provide the [Graco] Pack ‘n Play,” said Ravalli County Public Health Director Tiffany Webber.

The program, funded by a Mother/Child Block Grant, is in conjunction with the Women Infants Children (WIC) office and has fliers and information in other local health offices around the county to reach out to new parents.

“Our goal is to provide some education and give them a Pack ‘n Play if they need it,” Webber said. “It is a little slow going because for 2020 we weren’t bringing people in from the outside. It’s just now starting to get off the ground, this is a building year.”

The information is aimed at preventing sudden infant death syndrome (SIDS) — the unexplained death, usually during sleep, of a seemingly healthy baby less than a year old, Webber said.

“Usually, in the first 1-4 months, up to six months, but certainly within the year,” she said. “We look at key safety features. The big things people know, which are not smoking and not drinking. Breastfeeding is best, especially in the first six months. That’s a toughie because we don’t want to shame any new moms.”

The most important advice is that babies should be put to bed on their back in a hard, firm space “free of plushy toys and soft things,” including blankets, Webber said.

“They should be dressed in a way that is comfortable temperature-wise,” Webber said. “We discourage co-sleeping with your baby because we’ve seen incidents of suffocation and strangulation.”

People do not realize that with a baby asleep between two people, the baby is often the low point in the bed, possibly even surrounded by pillows or rolled blankets, she said.

“As parents are breathing in the oxygen, the CO2 tends to sink and can pool,” Webber said. “We’ve reviewed babies who died from lack of oxygen — not in this county, thank God. Babies should be in the same room with you but not in the same bed with you.”

Putting a baby to bed is on his or her back is important.

“If your baby rolls on its side, that’s okay, but never put a baby to sleep on its tummy, always on its back,” she said.

She acknowledges this is a trend that has changed as better information has become available.

“[On the back] there is less chance of death,” Webber said.

Participating in the “Back to Safe Sleep” program was a deliberate choice by the health department.

“There were a handful of programs we could choose from, but more of them had to do with family planning, which we don’t have anymore,” Webber said. “We were limited on what we could choose.”

Karen Johnson was the director at the time who made the choice, but the Safe Sleep Program was embraced because it is a topic that matters to current staff.

“To be honest, it is dear to my heart, as I did lose a sister,” Webber said. “She was born before me and was lost to SIDS at a couple of months old. I don’t talk about it with my mom. The little conversation we’ve had is that she was fussy, a colicky baby, put to sleep on her tummy at nap time and when mom went to check on her, she was gone.”

Webber and her younger brother had to wear a Holter monitor, a device used to detect heartbeats, she said.

“My parents were at a friend’s house, and mom laid him on the bed,” Rodrick said, “she said she laid him down, walked out, had an overwhelming feeling to go check and when she went back he was gone.”

That incident was in the 1950s, when mothers were taught to put babies to sleep on their tummies, she said.

“It could have been anything, but they always said it was SIDS back then,” Rodrick said. “They never did an autopsy. I lived with the pictures and asked, ‘Who is that?’ I still feel uncomfortable talking about it, my mom doesn’t but I always worry if it would hurt her.”

Holter monitors were not invented yet.

“My mom and dad always said I was spoiled because they never put me down,” Rodrick said. “Somebody was always awake when I was sleeping, and they were holding me.”

One of the activities RCPH participates in under the Mother/Child Bock Grant is the Montana FICMMR program — the Fetal, Infant, Child and Maternal Mortality Review board.

“Every year we review all the deaths in the county of anyone under 18 or any moms within a year of birth,” Webber said. “We review and make recommendations.”

Examples of safety changes resulting from those investigations include an access road and signage for river users about a dam near Tucker Crossing; the installation of the traffic light on Ravalli Street; traffic caution lights near the airport and flags for crosswalk uses on busy streets in downtown Hamilton.

The FICMMR program involves a variety of stakeholders besides public health including doctors, a psychologist, the county attorney, the sheriff’s office, a pediatrician, an obstetrician, a mental health worker, a social worker from the hospital and someone from Child and Family Services.

“We have to have five people to do a review,” Webber said. “We usually do the review a year after the death. So, something good could come out of it, if possible.”

To get a free Pack ‘n Play call RCPH ahead of time, complete the minimal paperwork as data for the grant, then receive a DVD, brochure and crib.

RCPH is still participating in the “Skull Saver” program. To get a free helmet bring in the child to be measured and fit. The program sends someone to the skateparks in Hamilton and Stevensville to fit kids for free helmets. RCPH also offers free car seats, but does not have a trained technician to do the installations.

SAFE in the Bitterroot holds “Under the Stars” virtual celebration and fundraising auction benefit July 11 – 16.

Robert’s Run exists to remember Robert A. Leonardi and raise money for children’s education and play. Sign up to participate at runsignup.com/robertsrunmt.

Baby’s breath is a noxious weed in Ravalli County

The 13u Bitterroot All-Stars won the 2021 Montana State Babe Ruth 13u State Championship in Helena on Saturday and will  will compete in the Pacific Northwest Regionals in Ferndale, WA, July 26 – 31.

The North Valley Public Library in Stevensville has exciting programs for adults, teens and children including Summer Reading and SpectrUM Summer of Science.

With multiple active fires in the region and the threat of new fire starts, Ravalli County Commissioners designated Ravalli County a high fire hazard area with Stage 2 restrictions during the Fire Update meeting on Monday.

The Lake Como Triathlon is a beautiful but challenging XTerra-style race with an open water swim, a mountain bike ride and a trail run on Saturday, July 24.

Ravalli County Public Health director Tiffany Webber, office assistant Zoe Alford and vaccine manager Lori Rodrick with one of many free cribs that are part of the “Back to Safe Sleep” program.

Ravalli County Public Health employees set up one of the free cribs.