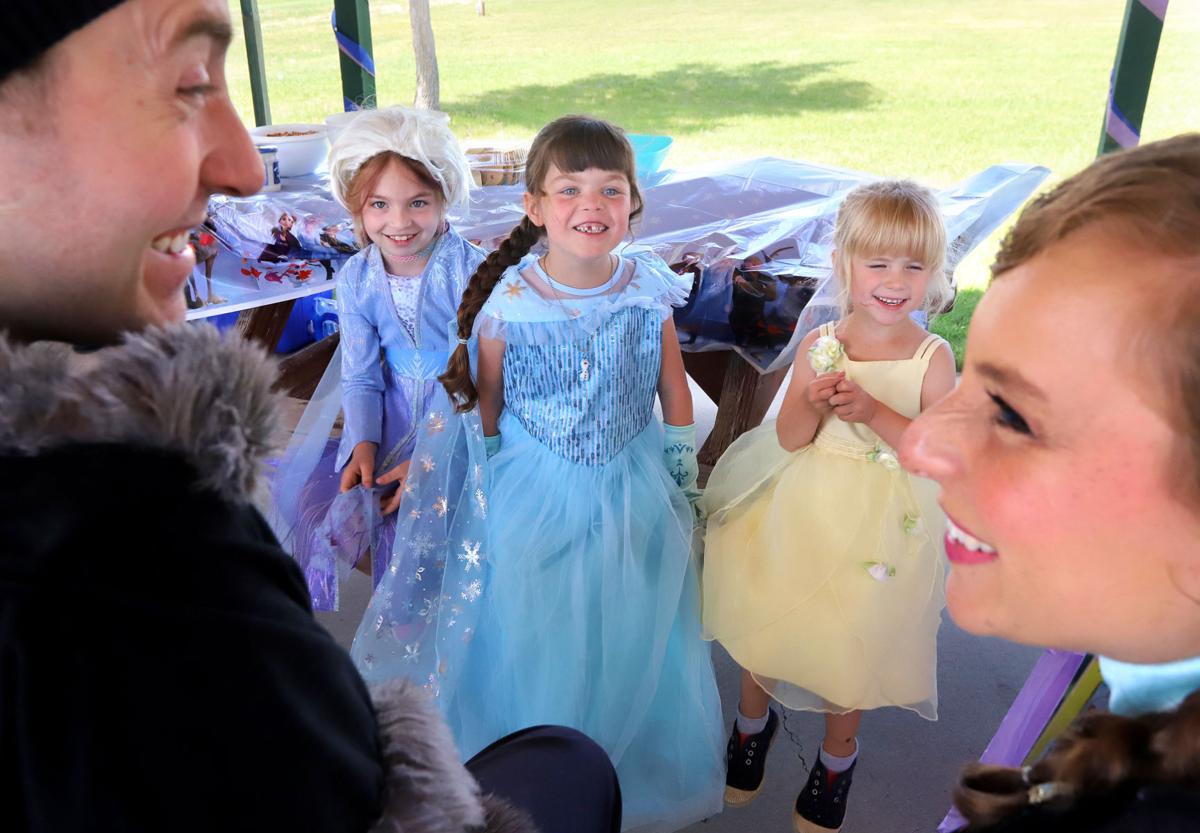 Maci Rogers-Eldridge and her friends, Felicity McLeod and Charlotte Anderson, grin as they watch actors Amber Greymorning and Andy Nelson of the Missoula-based group, Your Fairy Godmothers, perform during a Make-a-Wish party Saturday at the pavilion behind the Stevensville Fire Hall. 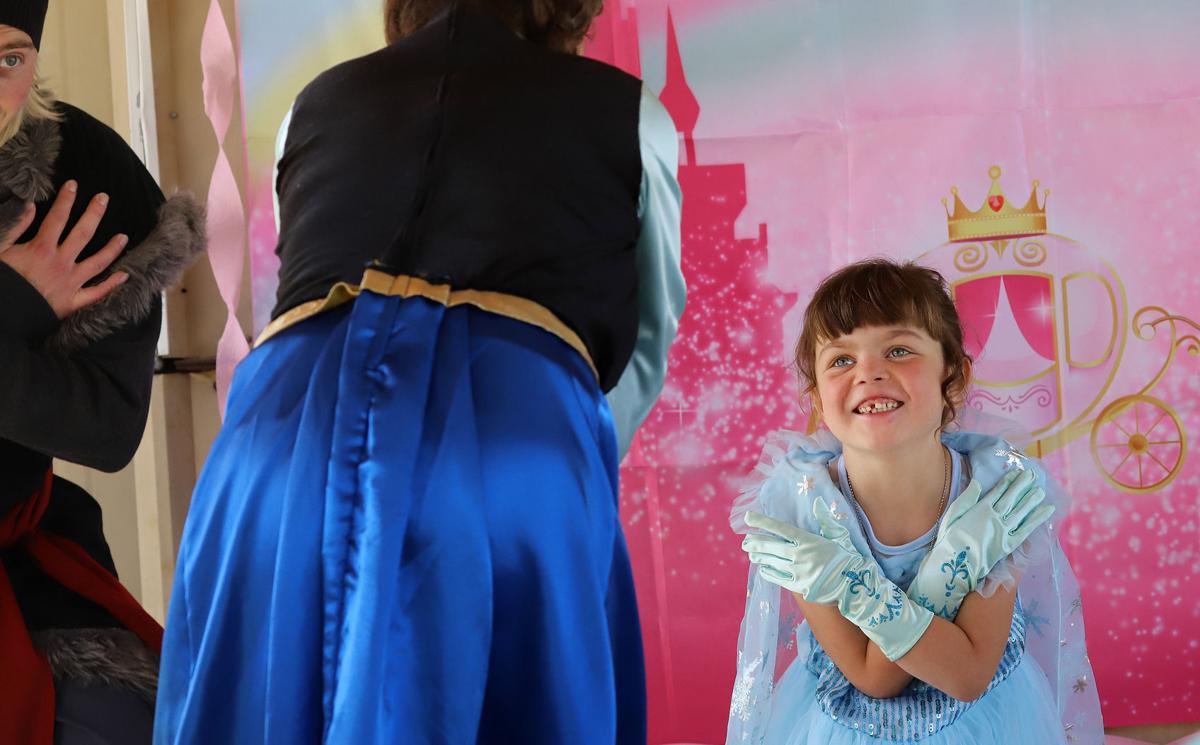 Six-year-old Maci Rogers-Eldridge couldn't have been happier as she danced along with actors from Missoula's Your Fairy Godmothers group during her princess Make-A-Wish party Saturday. 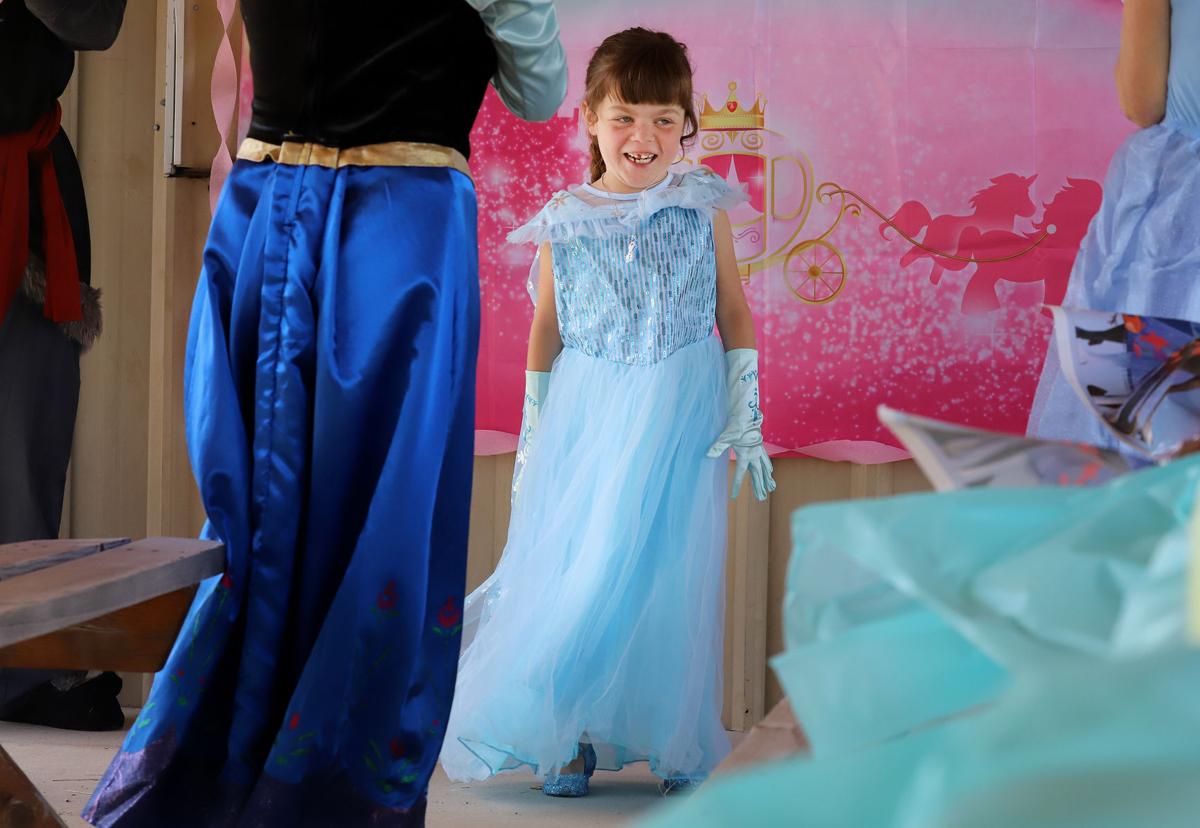 Maci Rogers-Eldridge revels in her role as princess for a day at a Make-A-Wish party Saturday at the Three Mile Fire Station.

For a day, Maci Rogers-Eldridge’s dream of stepping into her favorite Disney movie and becoming a princess came true.

Surrounded by fairy godmothers, cousins and friends all dressed in their best princess finery, the 6-year-old Stevensville girl danced, sang and smiled last Saturday afternoon in the shade of the pavilion behind the Three Mile Fire Station.

Her grandmother, Robin Kester, took it all in with a big smile and heartfelt thanks to the Make-A-Wish South Dakota and Montana.

“I’m just so happy for her,” Kester said. “She’s gone through so much in her tiny little life.”

Rogers-Eldridge was born with a congenital heart defect called hypoplastic left heart syndrome. She has been through a series of heart surgeries. Despite all that, Kester said her granddaughter is strong, independent and funny.

Like other 6-year-olds, Rogers-Eldridge likes to be outside swinging on her swing set or spend time with her horses. She also enjoys watching movies, especially her favorite — Disney’s “Frozen.” She can sing almost any Disney song, especially “Let it Go” from "Frozen" or anything that Jasmine sings from "Aladdin" or any song from "Beauty and the Beast."

Sheriff Steve Holton can attest to that.

On Saturday, Holton picked up Rogers-Eldridge from her home and took to her to the Kutting Edge Salon in Stevensville to have her hair styled and nails done for the big day. They both then loaded up in Holton’s black pickup and made the drive to the fire hall where family, friends and the Missoula group called Your Fairy Godmothers were waiting with a picnic table loaded with presents.

“Every princess needs a chariot driver,” Holton said. “She sang all the way here … I don’t always have a choice on how I spend my Saturdays, but sometimes I get to pick what I get to do.”

For the next few hours, Rogers-Eldridge twirled around in her princess dress and tiara as everyone sang, danced, ate pizza and opened presents.

Make-A-Wish has been creating life-changing experiences for children with critical illnesses for 41 years.

Last September, Make-A-Wish South Dakota joined forced with Make-A-Wish Montana to serve even more children in the two states. Research shows that children who have had wishes granted through the program can build the physical and emotional strength they need to fight their illnesses.

Carol Holman of Hamilton has been volunteering with Make-A-Wish for four years.

“It’s so nice to see them just be a kid for a day and not have to worry about their illnesses or anything else,” Holman said. “It’s an amazing program. It’s nice to be able to help make their dreams come true and their day special.”

Learn more about Make-A-Wish at wish.org/sdmt.

Despite COVID-19 and logistical woes, Tokyo 2020 to be the most inclusive Olympics

When Chapter One Bookstore’s co-owner Mara Luther heard of the debate over a request to paint four crosswalks in rainbow colors, Luther offered her windows in support to the group of high school students leading the effort.

On Monday, the Hamilton Zoning Board of Adjustments completed a marathon review of the conditional use permit the Roman Catholic Diocese of Helena needs to replace the 124-year-old church built by Marcus Daly with a larger modern building.

Maci Rogers-Eldridge and her friends, Felicity McLeod and Charlotte Anderson, grin as they watch actors Amber Greymorning and Andy Nelson of the Missoula-based group, Your Fairy Godmothers, perform during a Make-a-Wish party Saturday at the pavilion behind the Stevensville Fire Hall.

Six-year-old Maci Rogers-Eldridge couldn't have been happier as she danced along with actors from Missoula's Your Fairy Godmothers group during her princess Make-A-Wish party Saturday.

Maci Rogers-Eldridge revels in her role as princess for a day at a Make-A-Wish party Saturday at the Three Mile Fire Station.