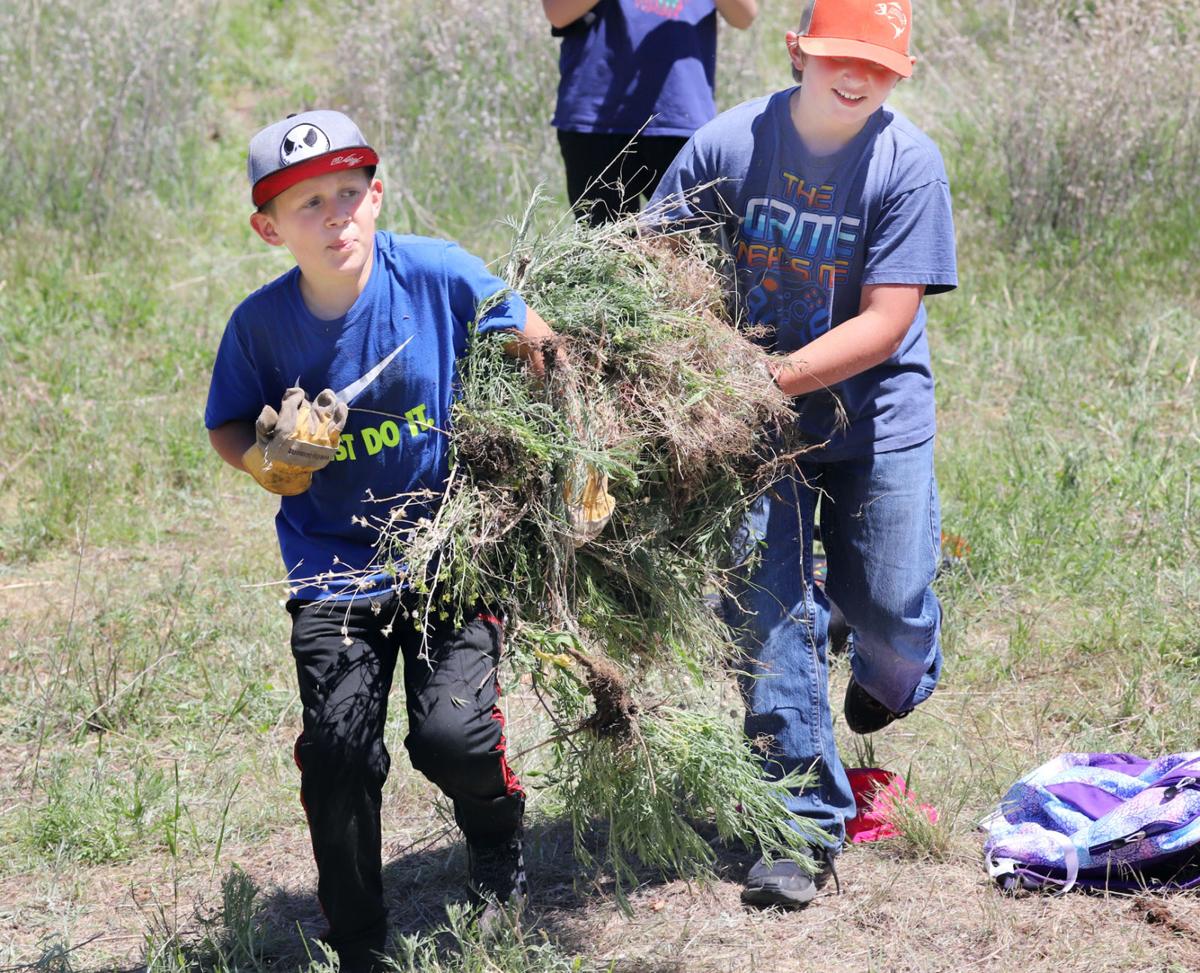 Daly Elementary fourth graders Asher Wheeler and Gavin Price haul down an armload of knapweed they had harvested from the hillside around the RAL Trail that honors their classmate, Robert Anthony Leonardi, who was killed in an hit-and-run crash two years ago. 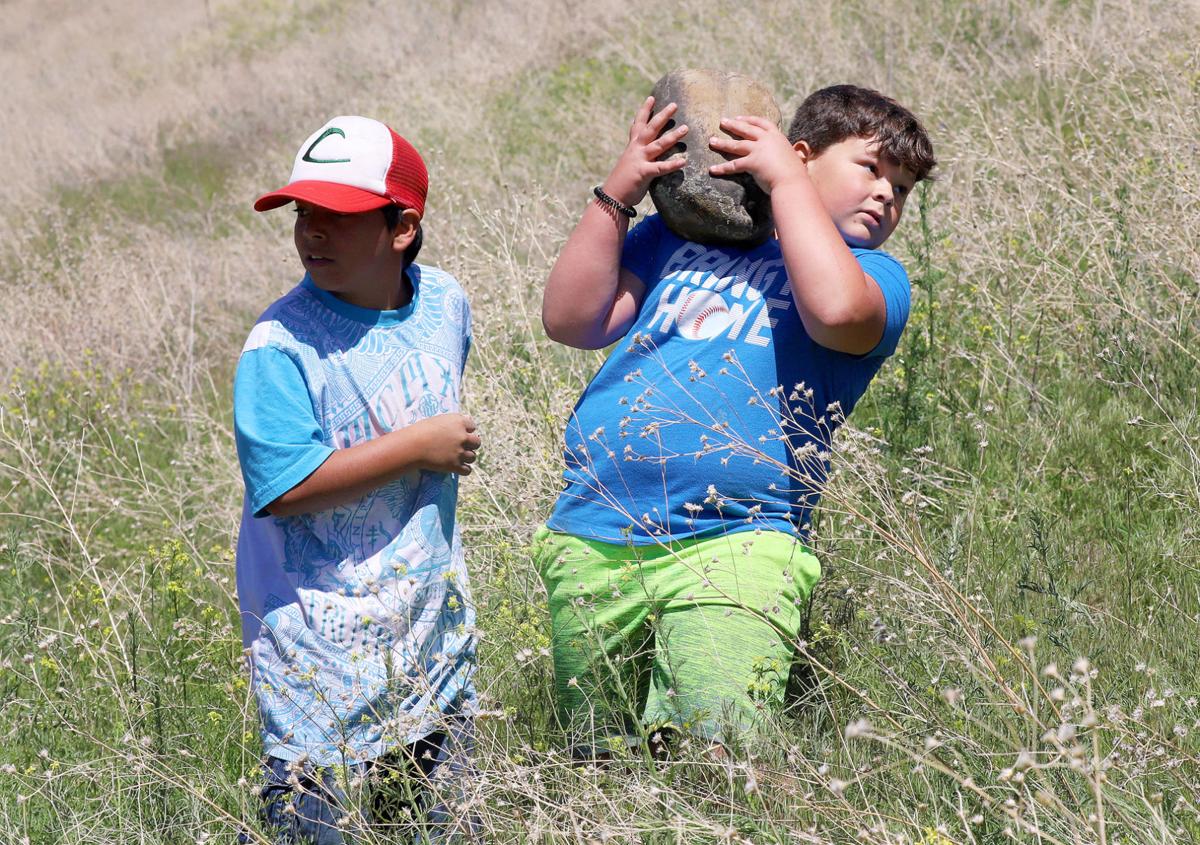 When Daly Elementary fourth grader PatRick Kraft was told to pick some rocks Monday along the RAL Trail, he decided to go big. His classmate, Armando Ayala, looks for his own rocks to haul to the trail. 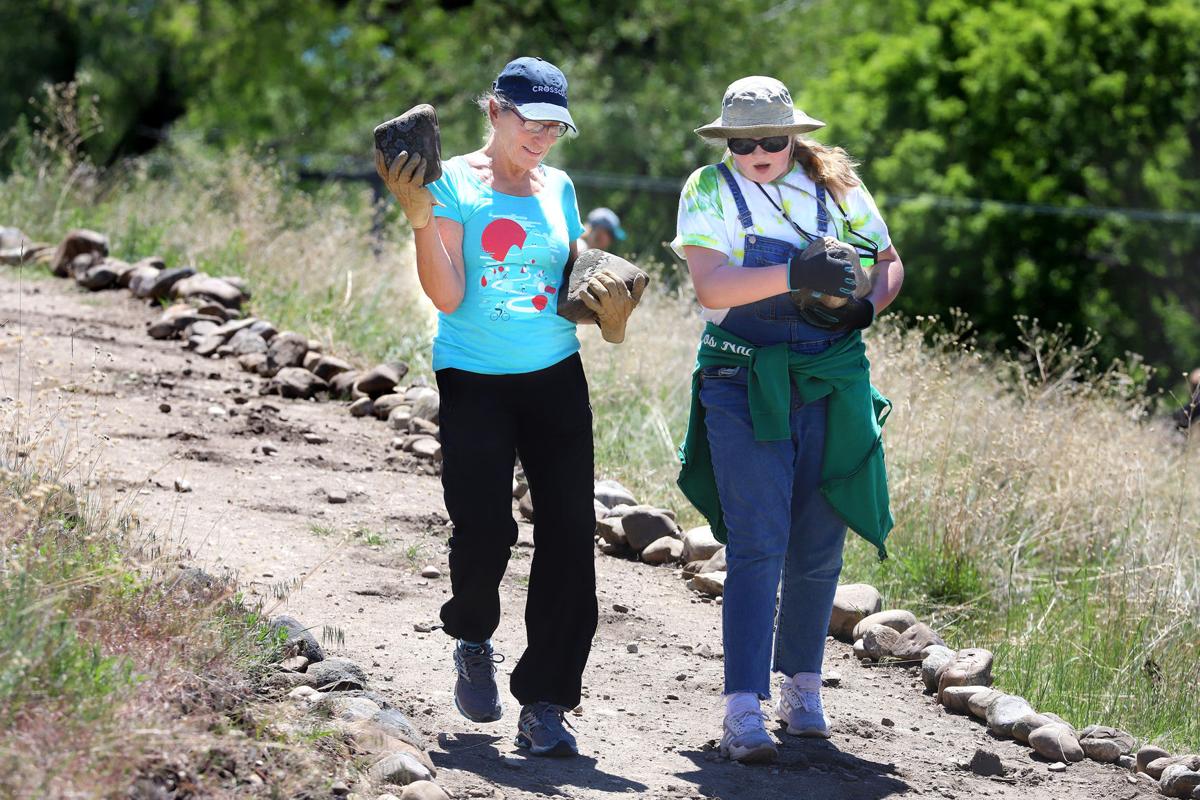 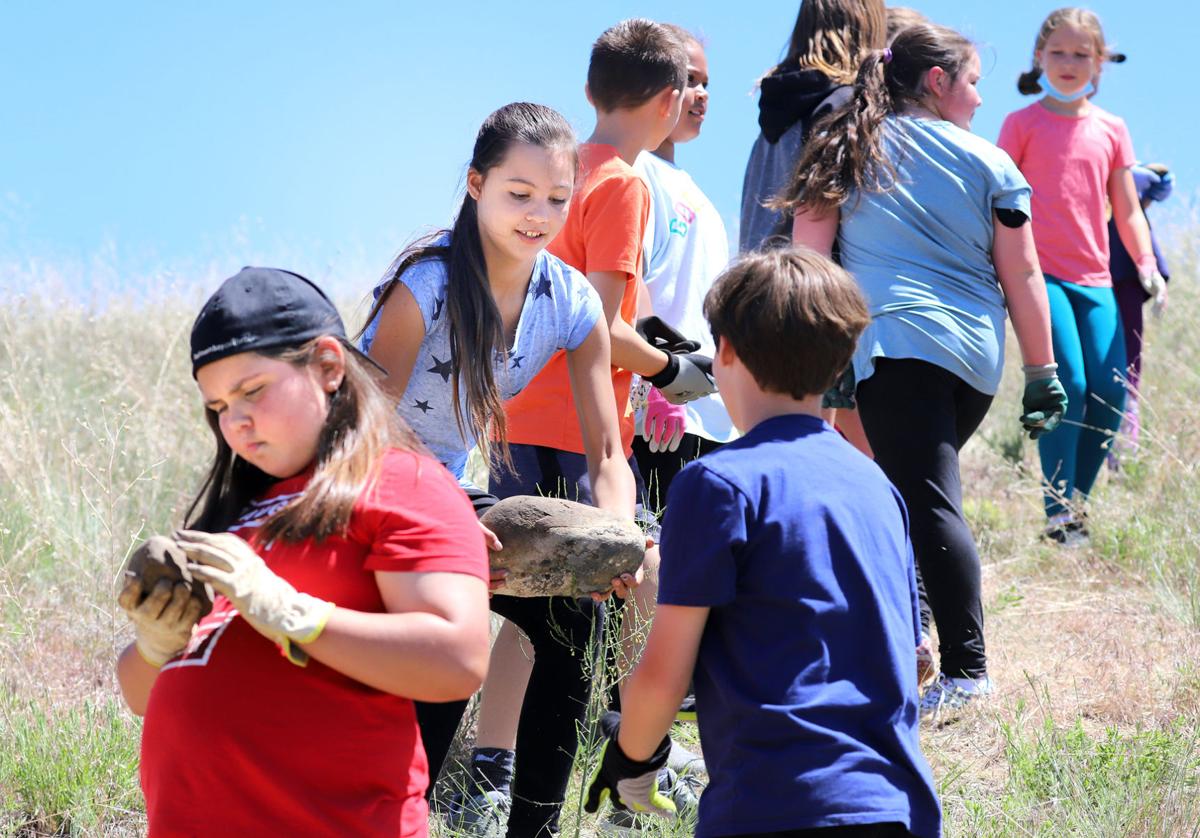 Robert Leonardi would have celebrated his 11th birthday Sunday.

On Monday, his fourth-grade classmates for Daly Elementary School remembered him by pulling on their work gloves and spending a part of the day picking hundreds of rocks along the trail that bears his name.

Robert Anthony Leonardi lost his life in a hit-and-run crash on Hamilton’s Golf Course Road in July 2019. Last fall, a generous gesture of a longtime Bitterroot family to offer access across their land was followed by an outpouring of volunteer help from the community to build the RAL Trail in the young boy’s memory.

The trail provides a safe way for both young and old to travel between Golf Course, Big Corral and Old Willow roads in Hamilton. The mile-long trail winds along the edges of an agricultural field that's been part of the Bitterroot Stock Farm for 135 years.

The six classes of the fourth graders came to the trail in two shifts. The rocks they picked off the hillside were used to armor side-cuts in the hillside and line the trail.

“I think we’ve solved the mystery of how the Egyptian pyramids were constructed,” Bryan Dufresne said with a smile as he watched the youngsters scramble up and down the hill. “It happened during a fourth-grade field trip.”

The second group of the 110 students also helped bury a bright yellow time capsule filled with letters to themselves, artwork and a couple of photos of Robert. They plan to move the huge boulder that sealed their cache when they graduate from high school.

One young girl’s letter talked about her love for art and her hope of becoming an art teacher when she grows up.

“Future self, you can decide if you want to move out of Hamilton, or not,” she wrote. The girl also said she worried about the end of the world and acknowledged to her future self that “I know less than you.”

The teachers also wanted to make sure their students knew about the trail, which offered a much safer route to town from the heavily populated area around the busy Golf Course Road. A group of volunteers from the local LDS church had recently worked to lay gravel on the trail and cut down weeds.

“We talked to Peter three weeks ago,” she said. “He gave us this idea.”

Peter Van Tuyn and his wife, Ilona Bessenyey, joined Robert’s parents, Phil and Alyce, to offer encouragement and lend a hand to the enthusiastic youngsters who raced up the hillside gathering rocks and pulling knapweed.

The community is also planning an event in August called Robert’s Run that will raise money for children’s education and play. The run is either a 5K or 1-mile chip-timed run/walk on Saturday, Aug. 7. If running or walking isn’t your forte, organizers have added the option to “Play like Robert” where people fish, camp, swim, hike or whatever active event people like to do on the same day.

To learn more, go to https://runsignup.com/robertsrunmt.

Gate back up on Hughes Creek, county ponders next move

Landowners have replaced the gate blocking the Hughes Creek Road in the upper West Fork. The Ravalli County Commission is considering its options.

Whether it’s enjoying the popular hike to Sweathouse Falls or hunting elk in the fall or turkeys in the spring, the Hackett family has been generous in its approach to public access to their ranch.

This summer, hikers to St. Mary Peak will have an opportunity to interact with foundation volunteers at the trailhead as part of the Bitterroot Forest’s first Trailhead Volunteer Ambassador program.

A $12 million road improvement project south of Stevensville  that has been years in the making is on hold after the construction company abruptly shut its doors.

A 73-year-old Hamilton man was charged with felony sexual assault after he allegedly groped a young man in public.

A Florence man was charged with fleeing from an officer, reckless driving, habitual traffic offender, speeding, failure to have a motorcycle endorsement and speeding near a school zone.

When Chapter One Bookstore’s co-owner Mara Luther heard of the debate over a request to paint four crosswalks in rainbow colors, Luther offered her windows in support to the group of high school students leading the effort.

Daly Elementary fourth graders Asher Wheeler and Gavin Price haul down an armload of knapweed they had harvested from the hillside around the RAL Trail that honors their classmate, Robert Anthony Leonardi, who was killed in an hit-and-run crash two years ago.

When Daly Elementary fourth grader PatRick Kraft was told to pick some rocks Monday along the RAL Trail, he decided to go big. His classmate, Armando Ayala, looks for his own rocks to haul to the trail.