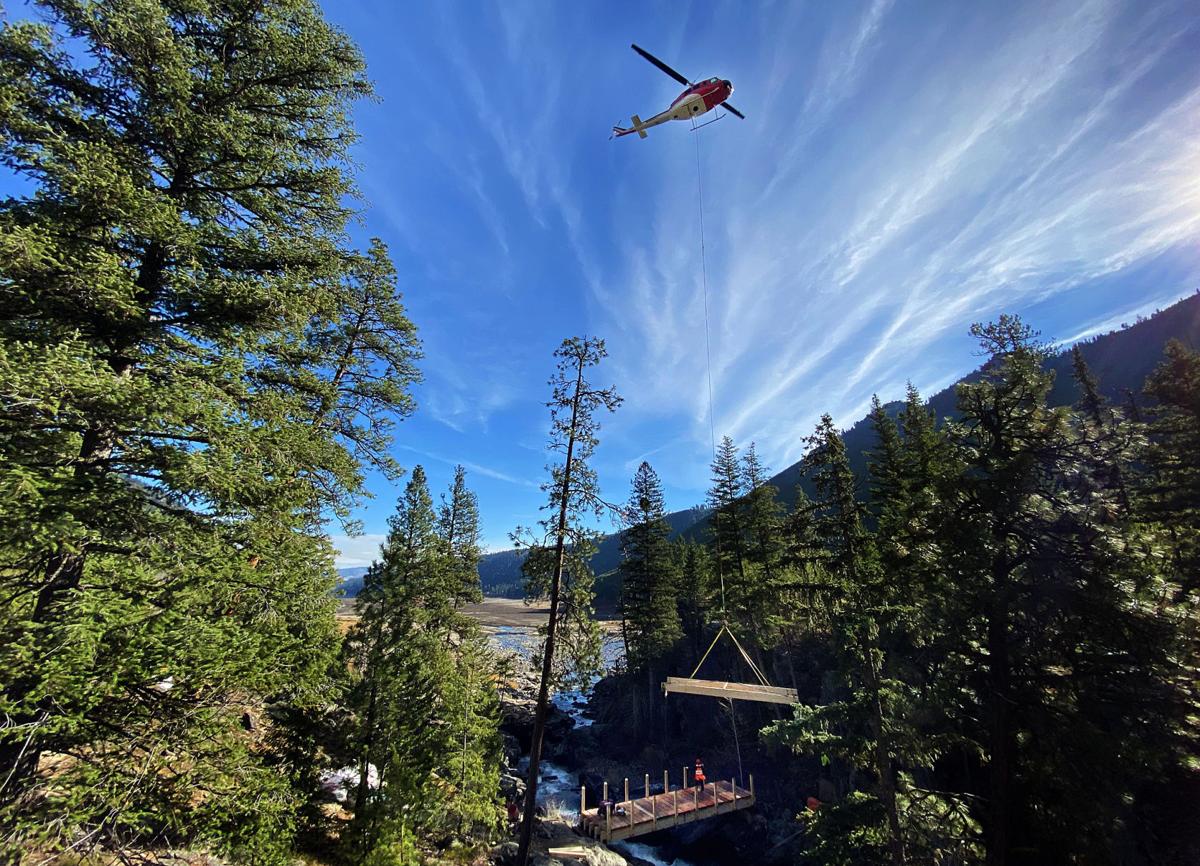 Spans of Yellow Cedar weighing nearly 3,000 pounds were delivered by a helicopter piloted by Hamilton's Andy Orr recently for a new bridge across Rock Creek on the west end of Lake Como. 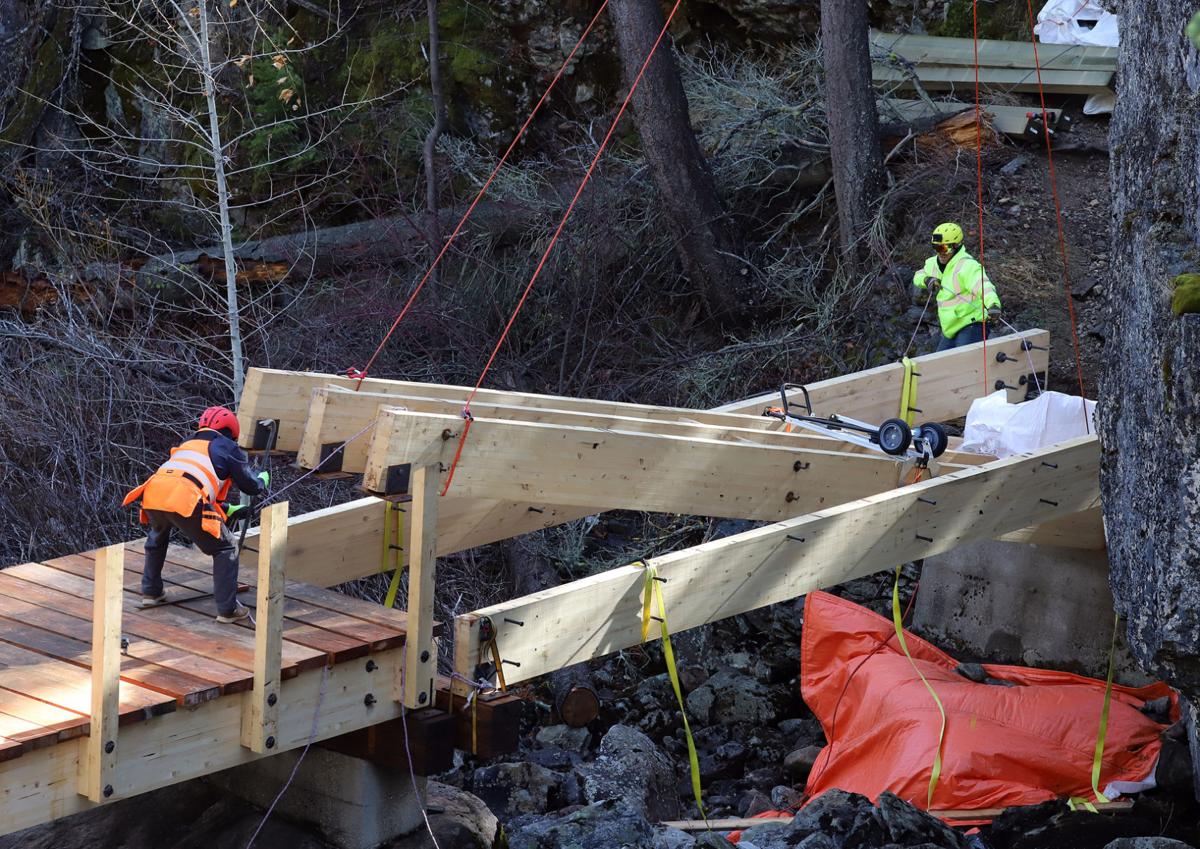 Tim Herrmann and another contractor with Idaho's NorTerra Services work to place a 30-foot span that would become part of the new footbridge over Rock Creek on the popular Lake Como trail. 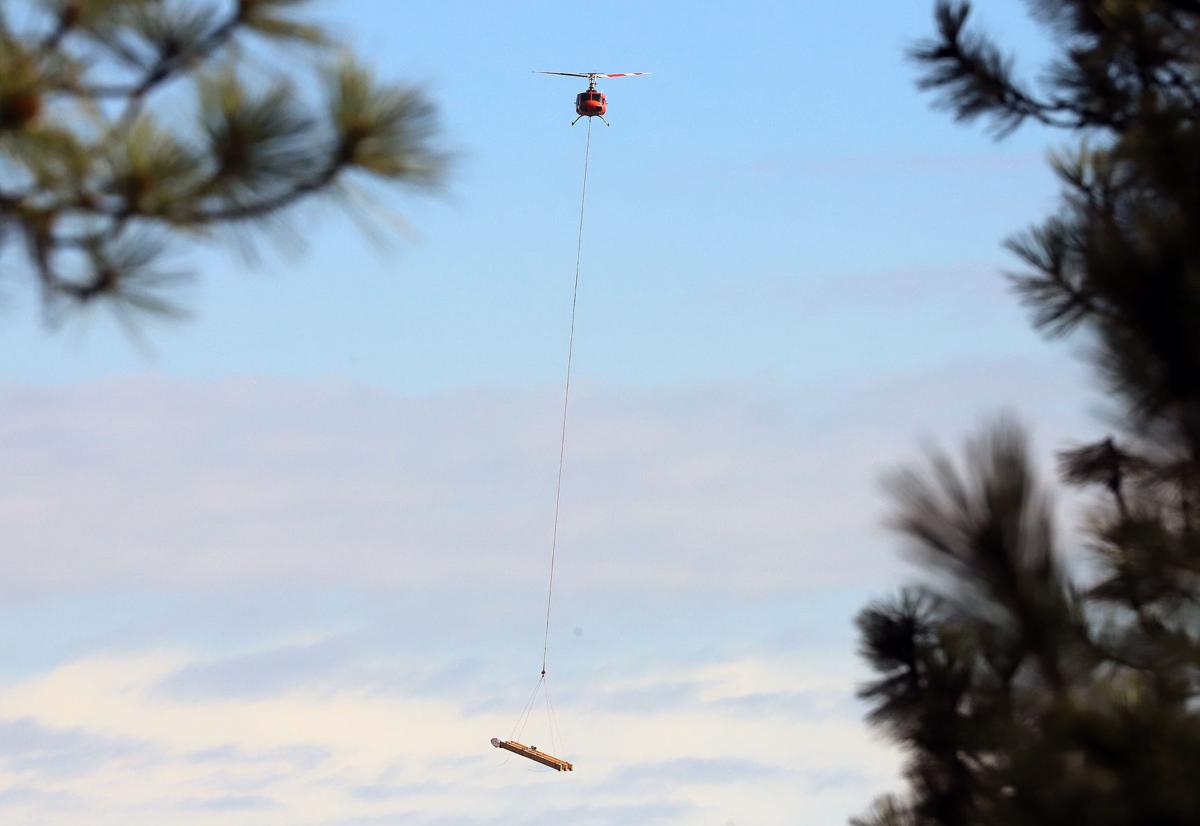 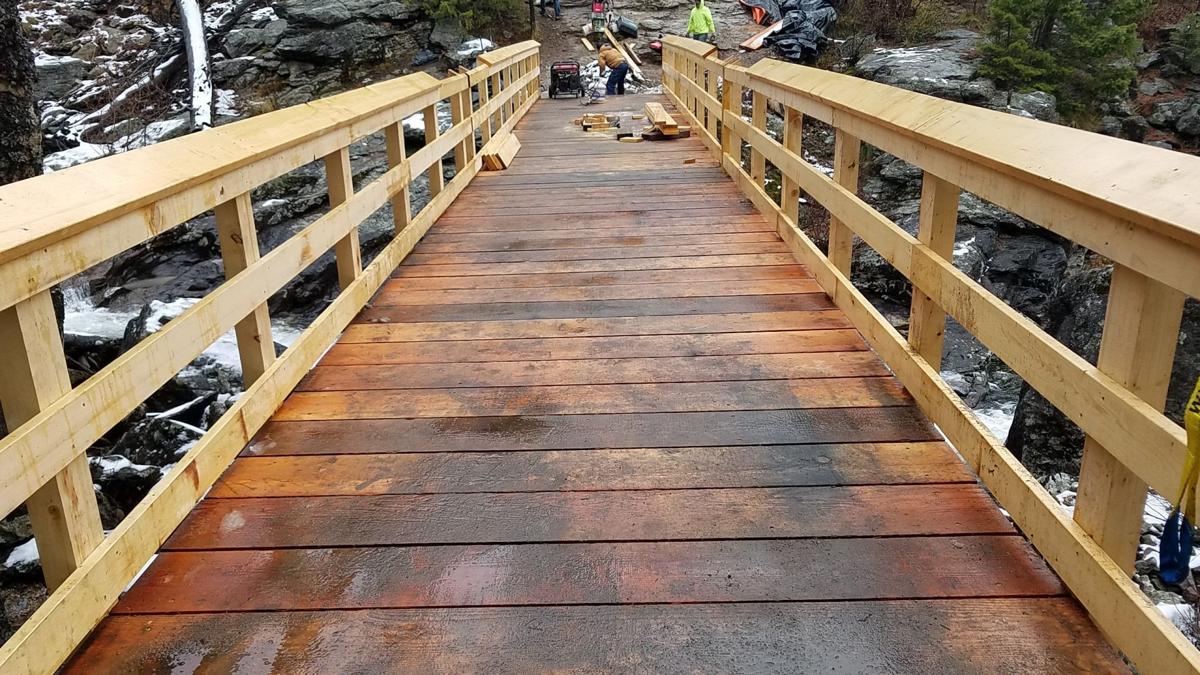 On a recent bluebird-bright sunny morning, the mesmerizing murmur of Rock Creek was interrupted by the staccato blast of a helicopter carrying a heavy load.

For a few dangerous minutes, the rotor wash from Huey piloted by Andy Orr filled the narrow canyon at the western end of Lake Como as 30-foot spans of Yellow Cedar weighing nearly 3,000 pounds apiece were lowered with precision at the site of a new backcountry bridge.

On the ground, two men contracted by Idaho’s NorTerra Service helped guide the heavy timbers into place with guide ropes.

Over a couple of days, Orr delivered four spans used to create the bridge’s superstructure. He also carried in loads of other materials and ferried the old bridge to the boat launch parking lot on the other side of the lake.

“When you consider that they were able to place the spans that were hanging from a 150-foot-long line onto a foot-wide abutment while dealing with the high winds created by rotor wash, I’m pretty amazed at how well that went,” Boelman said.

“Any time you’re dealing with a helicopter that’s bringing in loads that weigh more than a ton, anyone directly associated with the helicopter is considered to be doing a high-risk task,” he said. “The way he was able to lower those spans close enough that they could be placed exactly where they needed to be was very impressive.”

Placing the spans right on target requires patience and experience.

“We were obviously working in a ravine with rock cliffs on the south,” Orr said. “If something were to go wrong, like a gust of wind that caused the load to swing, it wasn’t conducive for a quick escape. When we’re working with these external loads, our biggest concern is the health and safety of people on the ground.”

Orr said it’s taken years to hone his ability to pilot a helicopter in situations like that. His company, AV8-ORR Helicopters, just recently completed a new pad and helicopter on the south side of Hamilton.

“It’s not something you would put a rookie on,” he said. “It takes patience. You can’t rush things. It may look like it happens quickly from the ground, but it feels much longer when you’re in the air.”

The Huey that Orr was piloting was modified to include a large Plexiglas bubble window on the door that is equipped with the critical engine instruments and gauges he needs to monitor the aircraft’s performance.

“You can lean into that bubble and look straight down to see the load,” Orr said. “This wasn’t particularly difficult. Everything went very well.”

“The conditions were right,” he said. “The contractor who was doing the work was good at what they do. They built all the loads so they would fly nice.”

The leader of that small team, Tim Herrmann of Sandpoint, Idaho, has been doing similar work in the backcountry for almost 40 years, including the construction of the suspension bridge in the Bitterroot-Selway Wilderness in 1975.

“He definitely had the experience needed for this project,” Boelman said. “When you’re working in a backcountry setting like this, you need the knowledge and experience to know how to move heavy timbers with just human strength.”

Construction of the new bridge is complete and people are already making use of it to access the full length of the Bitterroot National Forest’s Como Lake Loop National Recreation Trail, which is among the most popular places to hike, bike and ride horses.

The structure it replaced was built in 1974.

“It’s one of our most popular trails on the forest,” said Bitterroot Forest recreation specialist Mark Smith. “Without it, people wouldn’t be able to travel around the lake. Since it was more than 45 years old and knowing that a typical bridge superstructure doesn’t last much longer than that, we decided to be proactive and replace it.”

The planning for the project was complete when another project in the region that had been approved faced some setbacks. The Bitterroot Forest applied for and received $164,000 in Federal Lands Transportation Program funding to pay for the replacement of the 64-foot-long bridge that offers a spectacular view of Rock Creek as it drops into Lake Como.

The first bridge at the site was built in the 1930s. It was replaced by a second bridge constructed from native materials in 1953. The third bridge was the one that was just replaced.

“The old bridge had a slight dog-leg,” Boelman said. “The new bridge straightens that alignment.”

While the superstructure was built of Yellow Cedar, which is known for its natural anti-decay properties, the running surface is a combination of Douglas fir and larch.

“It’s the part that will take a beating,” Boelman said. “We may have to replace that in 10 or 15 years but the rest should be good for another half-century.”

With the list of people hoping for a holiday meal getting longer every day, the food bank’s founders and chief volunteers, Bill and Roxanne Gouin, were happy to see the donated turkeys.

The volunteers at Stevensville’s Pantry Partners are preparing for its first of two opportunities to provide people with special meals during the holiday season.

Homelessness is on the rise in the Bitterroot Valley. Advocates urge residents to look after the homeless and help them locate a warming shelter for this winter.

For the Ravalli Head Start families served by the program that matches generous community members with children in need, the Angel Tree is a godsend for their Christmas season.

Elk harvest down in Bitterroot, no general hunting extension planned

With one weekend left in Montana’s general hunting season, the elk harvest is trailing the five-year average at the Darby check station and in the region.

Spans of Yellow Cedar weighing nearly 3,000 pounds were delivered by a helicopter piloted by Hamilton's Andy Orr recently for a new bridge across Rock Creek on the west end of Lake Como.

Tim Herrmann and another contractor with Idaho's NorTerra Services work to place a 30-foot span that would become part of the new footbridge over Rock Creek on the popular Lake Como trail.