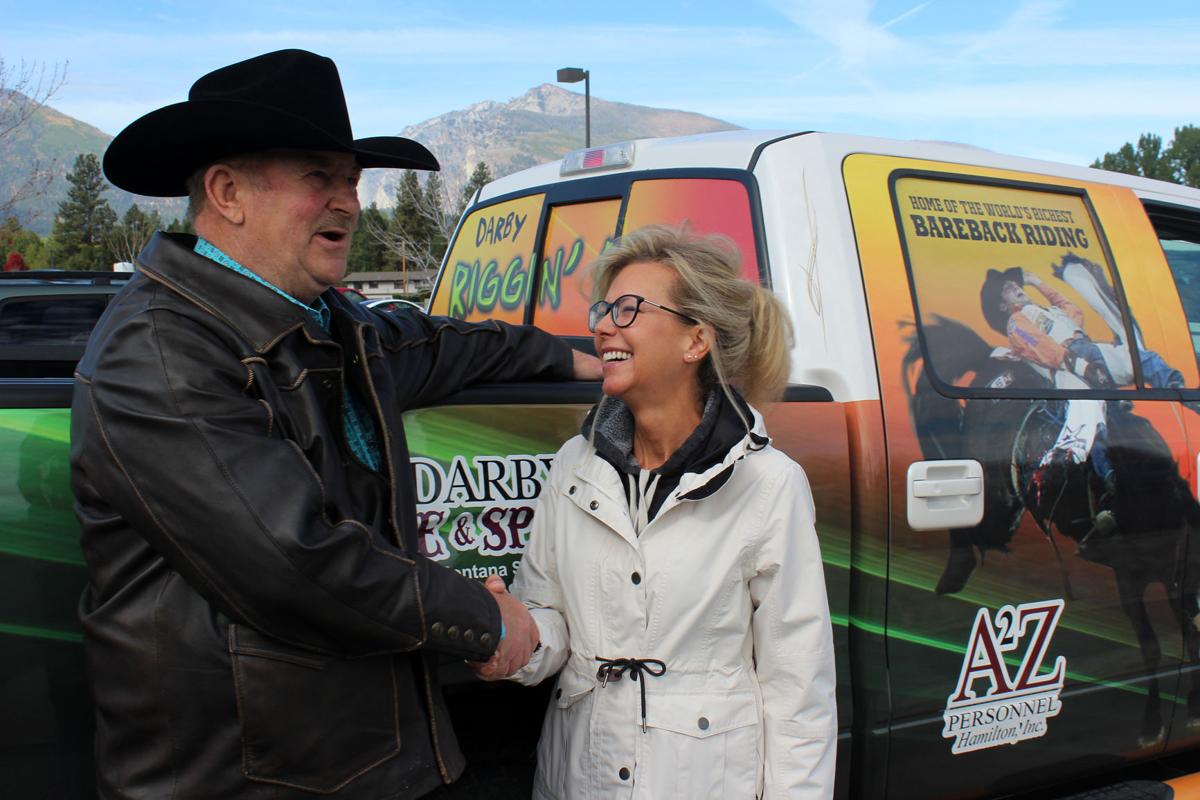 Darby Rodeo Association President Cal Ruark and Daly Hospital Foundation Board Vice President Shannon Urso shake hands after Ruark presented her with a $10,000 check from money raised at the rodeo for the Colors of Cancer campaign. 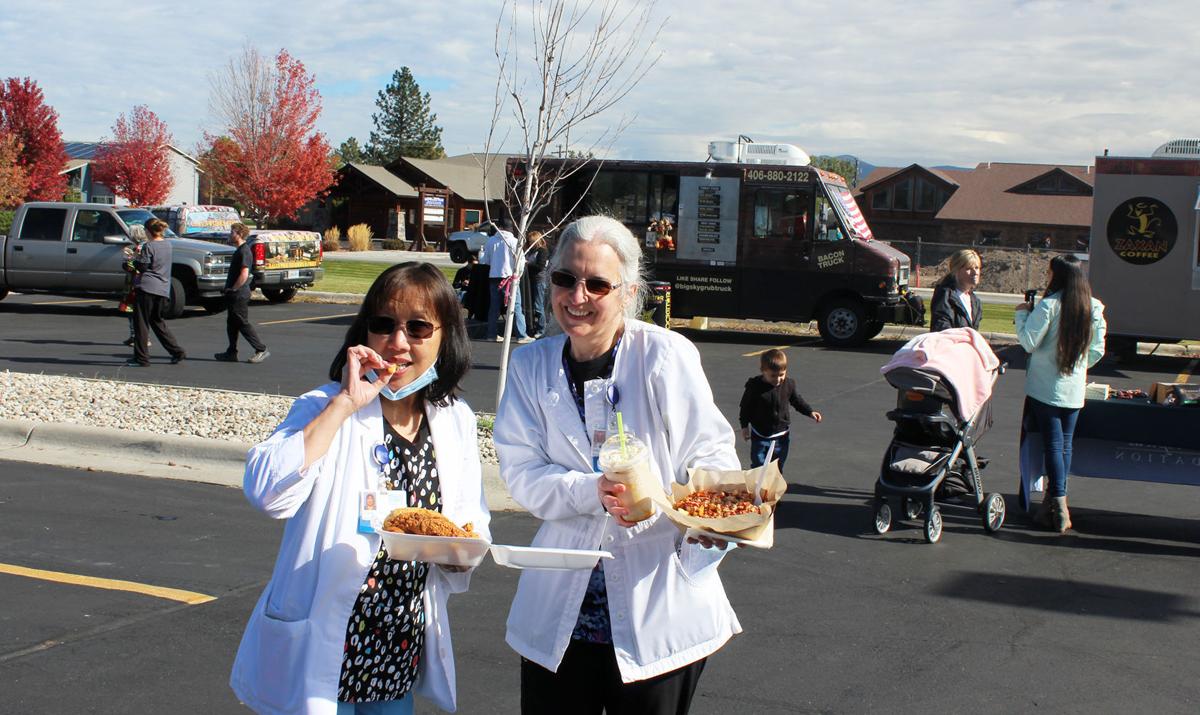 The Colors of Cancer kick-off lunch event with food trucks in the ER parking lot of Marcus Daly Memorial Hospital was held Friday.

Daly Hospital Foundation Director of Philanthropy Stacie Duce said the ongoing effort to raise funds for the cancer center is enhanced in October.

“The lunch event is to celebrate the start of our campaign,” Duce said. “It’s a little different because we’ve been raising money for the cancer center already and we will for another year but October we have a lot of grassroots fundraisers happening. Every dollar that they raise is doubled, matched by the hospital and earmarked for the cancer center. With every dollar being matched we want to make sure we make the most of the next 30 days.”

The hospital closed the cafeteria and encouraged employees to have lunch outside in the nice weather. Food trucks included Cajun Works, Big Sky Grub Truck, Zaxan Coffee and Snow to Go. Mineshaft Pasty Co. and Red Rooster also contributed to the menu with pre-orders.

“It’s just a fun chance for hospital staff to come out and have lunch, they don’t have a lot of time, so we bring food to them,” Duce said. “We have good neighbors that come too. This gives us an opportunity to bring awareness, celebrate those who are surviving and memorialize those we want to remember this time of year.”

Cal Ruark of the Darby Rodeo Association presented $10,000 earned at the Team Orchid event – the Twisted Nut bull riding rodeo in July to support survivors of testicular cancer and to encourage screenings.

“This whole thing at the arena is just exploding. It’s a good explosion,” Ruark said.

Duce said the Darby Rodeo Association has been supporting cancer fundraising for many years.

“This year they are giving $10,000 which is 25% more than last year and four times what they gave year after year for Sprinkle Pink,” she said. “Colors of Cancer tickled his fancy because he wanted to fund raise for testicular cancer Team Orchid. This donation is amazing. It speaks to his vision, his success, his supporters but also the fact that we need to bring light to every cancer.”

Duce said screenings and regular check-ups for testicular cancer are especially important, “because it affects younger men who think they are invincible.”

Ruark said his sponsors, some of whom he’s had since Logger Days in 2000, asked, “What about raising funds for men, as far as cancer goes?”

“I thought that’s true, not that I have anything about Sprinkle Pink but thought let’s build and other side of this and tie it into rodeo,” he said. “Watch and see how this will grow, as other rodeos get on board. I had people complain about the name, Twisted Nut, but it has to do with bull-riding.”

“That’s why the infusion center speaks so well to me,” Urso said. “They were going to Indianapolis for treatment, where Lance Armstrong went, but if we’d had the center here we could treat him here.”

Duce said that two years ago she had a testicular cancer information table at the rodeo.

“So many young men came to tell me they were survivors,” she said. “Those conversations happened more often than I expected. This year the DRA donation is bigger because we partnered, and we presented entertainment at the Twisted Nut. We brought in Chevel Shepherd and entertained rodeo fans clear into the night, it was beautiful.”

“The partnerships, like we have with Darby Rodeo Association, are vital to our continuing efforts to raise money for the infusion center and other cancer treatments in the valley,” she said. “We love working with local people and getting to make great acquaintances in the meantime.”

The Colors of Cancer efforts in October have many events from high school “pink out games” to community challenges to be involved in to help raise funds for the cancer center.

Run or walk in the Colors of Cancer 5K at 9 a.m. on Saturday, Oct. 2 at the Canyons Athletic Club.

Evans Ace Hardware is hosting “Smoking for Health” by Team White on Saturday, Oct. 16, with a Trager smoked barbecue lunch and information on the “Quit Montana” campaign. Giving opportunities to benefit Team White include a suggested donation for lunch, raffle tickets for “white” products like paint and coolers, as well as a “round-up” at the register each Saturday in October.

MDMH is hosting an Art Show and Swap to benefit Team Sky Blue — prostate cancer. Donations of original art and prints are welcome, contacting the Daly Hospital Foundation at 406-375-4674.

Remember that every dollar raised in October is matched by the hospital and earmarked for the cancer center’s $4 million budget.

Darby Rodeo Association President Cal Ruark and Daly Hospital Foundation Board Vice President Shannon Urso shake hands after Ruark presented her with a $10,000 check from money raised at the rodeo for the Colors of Cancer campaign.