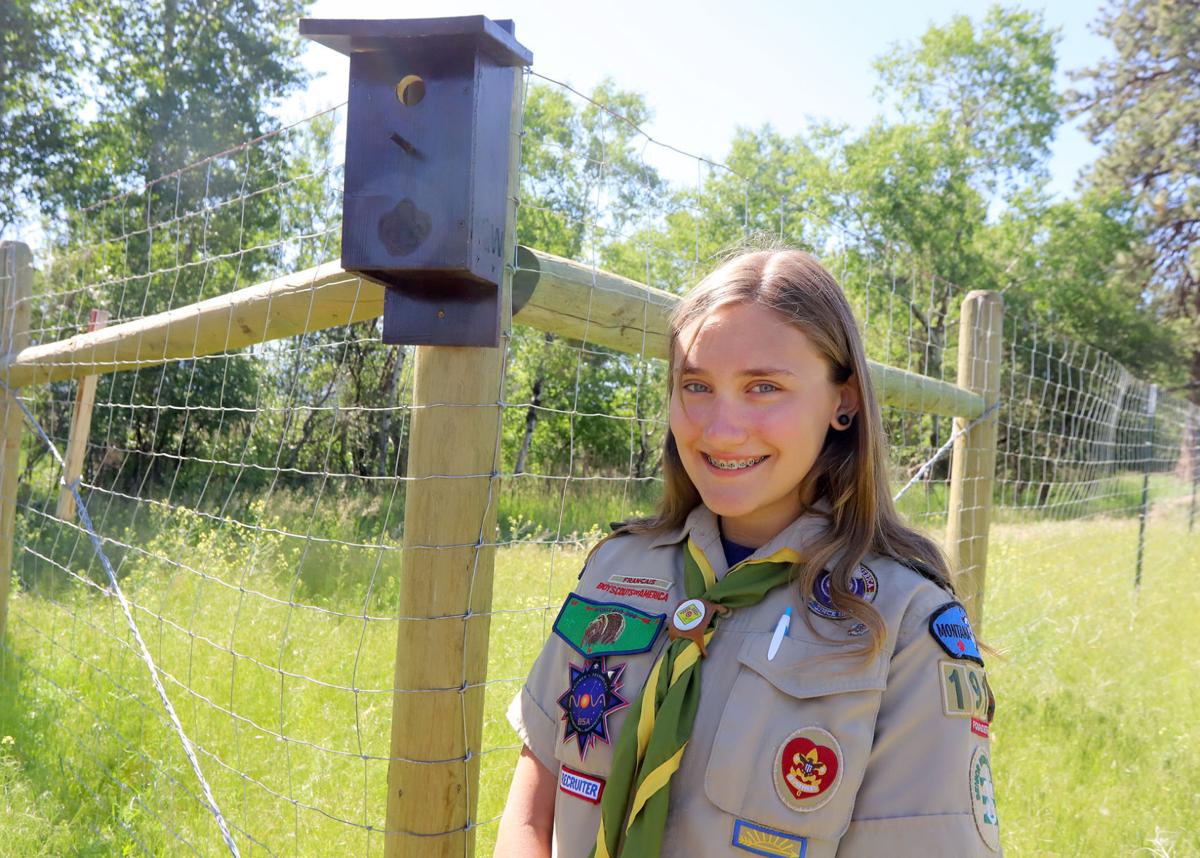 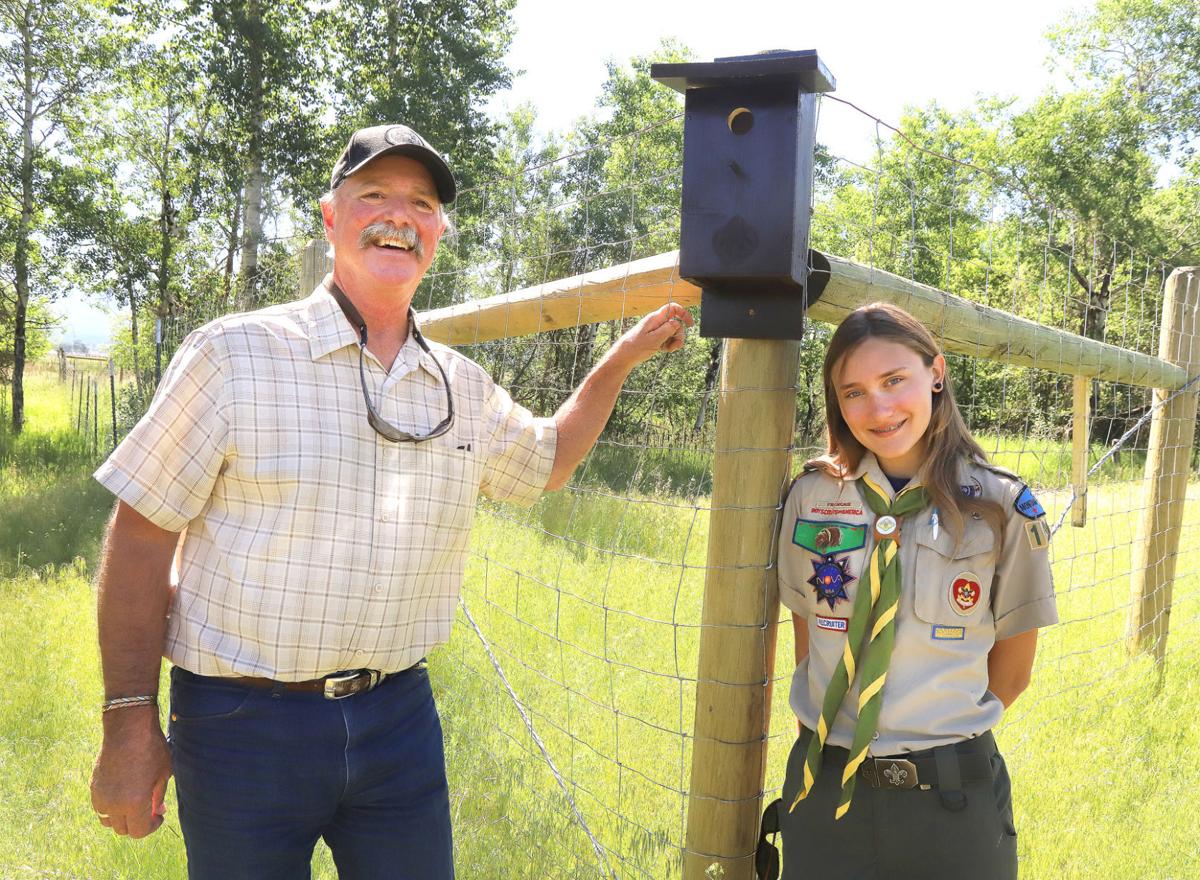 Teller Refuge's executive director Sam Lawry poses with 13-year-old Meline Gardner-Wavrant by one of the bluebird boxes she helped build and install as part of her project to become an Eagle Scout.

If you were to ask the Bitterroot Valley's first female Eagle Scout how she got involved with scouting, Meline Gardner-Wavrant would tell you she really didn’t have a choice.

“I’ve been involved with scouting my entire life,” Gardner-Wavrant said. “I just really love it so much.”

When her older brother joined Cub Scouts years ago, she just naturally tagged along.

While she spent six years in the Girls Scout program — long enough to earn a Bronze Star — the 13-year-old said she was drawn to the activities, camps and challenges that both the Cub and Boy Scouts had to offer.

“It just felt so good to be able to take part in all of that even if it did feel a little weird at the same time to belong to a group called the Boy Scouts and I was a girl,” she said, with a smile.

That changed a bit in 2018 when the Boy Scouts of America officially switched their name to Scouts BSA. The year before — on its 108th anniversary — the organization decided to open its highest high rank, Eagle Scout, to girls and allowed younger girls to join Cub Scouts.

Gardner-Wavrant was one of three girls who founded a girls’ Scout troop in Missoula. She worked to earn the 21 merit badges she needed to qualify for Eagle Scout.

All she needed was a project that would both benefit the community and show her ability to lead.

Since she liked animals — her home has a few of almost every domestic and farm animal that you can name — Gardner-Wavrant reached out to Sam Lawry at the Teller Refuge north of Corvallis.

“She wanted to do something on The Teller that would meet the requisites of earning her the rank of Eagle Scout,” Lawry said.

There’s always something that needs doing at places like the refuge but what came first to Lawry’s mind were all the dilapidated bluebird boxes scattered about the property.

“Most of them were in bad shape,” he said. “They hadn’t been repaired for a long time. I suggested that maybe she could repair some of the old ones and maybe build a few new ones."

The first step for Gardner-Wavrant was to take the proposal before the Eagle Scout board, which approved her plan to build 14 new boxes for the refuge. From there she had to reach out to local businesses for donations for supplies and round up a group of people who would volunteer to build the boxes and help her place them on the refuge.

“I had to plan the whole thing,” Gardner-Wavrant said. “At first, it seemed like it was painfully slow. There was a lot of paperwork that needed to be done.”

And she had to do the research to ensure the boxes were built with holes that would accommodate bluebirds and swallows, but were small enough to keep starlings out.

She found that people were excited to be a part of her journey.

The folks at Massa Home Center in Hamilton and Stevensville’s Eastside Ace Hardware donated the materials. She found volunteers through her brother’s scout troop and friends from 4-H.

“A lot of people came to help me when it came time to build them,” she said. “I had 15 helpers who worked on four different days to build the boxes.”

Each was carefully stained, with the scouting stamp etched into the front. The boxes were all numbered. One side was hinged so they could be cleaned out every year.

“If you don’t do that, they’ll fill them completely up with nesting material,” Lawry said. “People also need to be careful of bees when it comes time to clean the boxes out. They like them too.”

Once the boxes were all built, another small crew accompanied Gardner-Wavrant and Lawry onto the refuge to find the perfect places to hang the new nesting sites. She learned they needed to be faced to keep their openings protected from the wind and weather. They also needed to be placed high enough so the birds were protected from predators.

“It was a bit of challenge for me since the boxes had to be placed way over my head but I had lots of help,” she said. “I really liked the way that my project turned out.”

So did the folks who decide on whether a Scout will earn that high honor.

On June 9, Gardner-Wavrant was officially named an Eagle Scout.

She hopes that other girls in the Bitterroot will want to give scouting a try.

“It really is awesome,” she said. “There are so many different things that you get to do and so many people you get to meet. It’s the everything about it that I like.”

She may have to wait until next year to get to see bluebirds using her boxes on the refuge.

“It was a little late in the nesting season when the boxes went up,” Lawry said. “To date, we’ve seen five of the boxes used for nesting this year. All of those have been swallows, which is still good.”

Next year, when the bluebirds arrive at The Teller, Lawry is certain they will give Gardner-Wavrant’s boxes a look.

“She did a really great job,” Lawry said. “These boxes will be here at the refuge for years. It’s a real asset for us.”

Sudanese man in NYC unable to talk to family

For a day Maci Rogers-Eldridge’s dream of stepping into her favorite Disney movie and becoming a princess came true thanks to Make-A-Wish.

As biologists consider proposals to stem the tide of steep brown trout population declines in southwest Montana, the situation in the upper reaches of the Bitterroot River couldn’t be more different.

Teller Refuge's executive director Sam Lawry poses with 13-year-old Meline Gardner-Wavrant by one of the bluebird boxes she helped build and install as part of her project to become an Eagle Scout.