Become a Member
Read Today's E-edition
Share This
Hometown challenge: Young Darby bull rider to give Darbacious a go
0 Comments
Share this
1 of 2 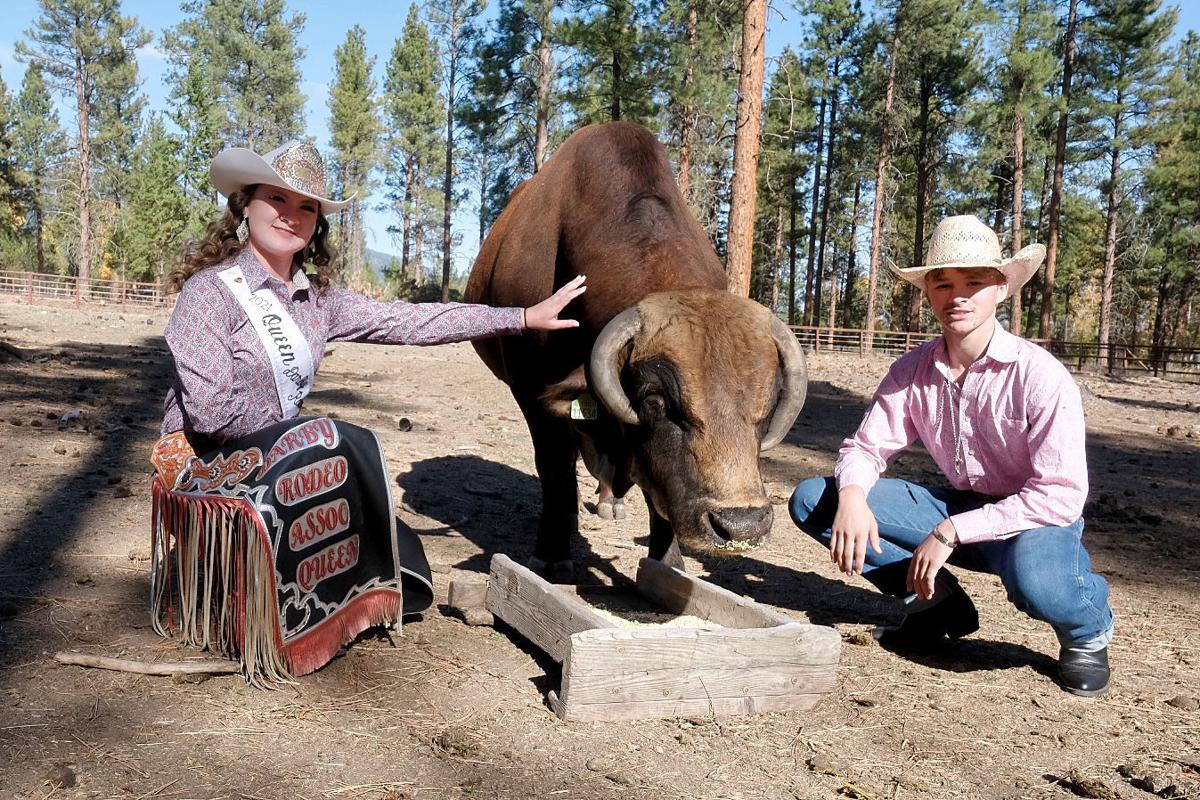 Darby Rodeo Association Queen Elle Bucher and Darby bull rider Devyn Hundley pose next to Darbacious. The well-known bull has yet to be ridden, but 15-year-old Hundley plans to give him a try at the Twisted Nut Festival bull riding event next July at the Darby Rodeo Arena. 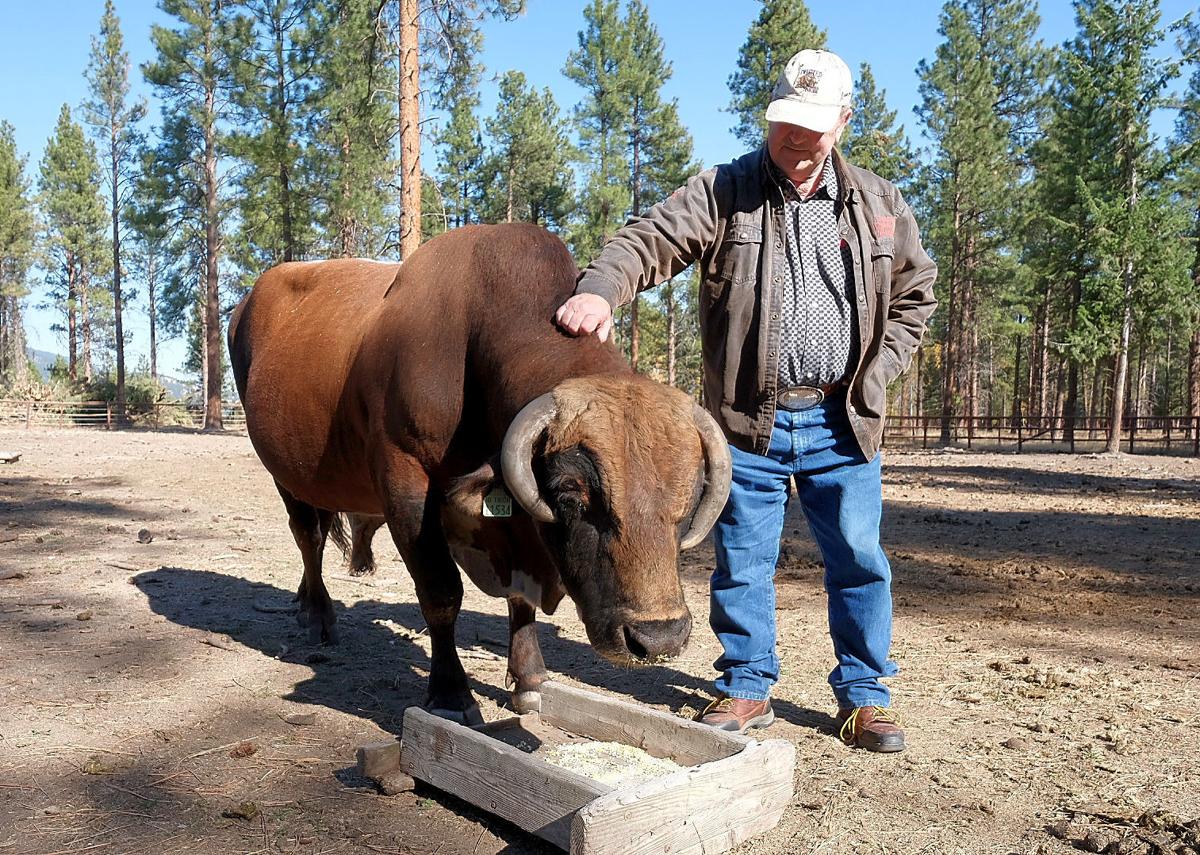 Darby Rodeo Association president Cal Ruark gives the bull he named Darbacious a pat on the back. The bull has been the official mascot of the Darby Rodeo Arena for several years. He's never been ridden, but a young Darby rider plans to try at the July Twisted Nut Festival bull riding event.

Devyn Hundley has always been a bull rider.

From the time he was big enough to climb on the back of a calf and tell the gate holder to let it go, the young man from Darby has lived for the adrenaline that comes from trying to stay astride a powerhouse of muscle and torque.

The man behind building Darby’s once run-down arena into something that now draws some of the best cowboys, cowgirls and national sponsors to the tiny town had long ago noticed Hundley.

“From the time he was a little boy, he was always the one wearing Wranglers, boots and a cowboy hat,” Cal Ruark said. “He’s been living the dream all this time while riding calves, steers and bulls. He and I have gotten pretty close.”

Coming off a record-breaking year of rodeo events that included a special recognition by the National Rodeo Association, Ruark has already started looking for something that would make next year even more memorable.

After the 15-year-old Hundley placed fourth overall in the bull riding for Montana high school rodeo, first at the Ravalli County Fair Rodeo and was invited to ride “with the big boys” at the NILE Stockshow and Rodeo in Billings this weekend, Ruark came up with an idea that could some additional excitement to what’s already one of the highlights of rodeo in Ravalli County.

Several years ago, Ruark bought a bull that its owners had named Droopy because of its long eyelashes.

Of course, he renamed it.

Darbacious became the official mascot of the Darby Rodeo Association. The huge bull that no one could ride turned out to be a buttercup when it was outside the rodeo arena. Ruark took the bull to store parking lots and other places where people gathered. Folks enjoyed watching Ruark reach through the fence to scratch the perfectly docile bull behind its ear.

Hundley came to know Darbacious well over the years. He saw quite a few bull riders come flying off his back. But the young man had ridden some pretty good bulls by now and he was ready to give Darbacious a try.

“I thought about it a long time,” Ruark said. “If he got on that bull and got hurt, I’d have a hard time living with that. But Devin has been doing so good, we both thought the time might be right.”

The annual bull riding event hosted by the Darby Rodeo Association had for years focused on Tough Enough to Wear Pink to raise money for Marcus Daly Memorial Hospital’s breast cancer screening program. The event has raised thousands of dollars toward that cause.

For the last two years, they focused on supporting similar efforts for testicular cancer screening at the bull riding event they renamed the Twisted Nut Festival.

The rodeo always brings a packed house of folks anxious to watch some of the best bull riders in the country riding spectacular bulls in the arena that features seating that puts everyone at eye level for the action.

Ruark, with Hundley’s help, plans to offer an extra exhibition ride this year that will pit the hometown bull against a hometown bull rider. At stake will be a purse that could reach up into the $10,000 mark. If the bull wins, the money would go to the hospital’s testicular cancer program. If Hundley wins, then it will be his choice where that money ends up.

It’s been a year since Darbacious has come out of a chute.

“Up to this point, no one has ever ridden him,” Ruark said. “He’s pretty wicked when he comes out of the chute. At the first crack, he back winds. It’s pretty severe.”

“Devyn and Darbacious have kind of grown up together,” he said. “I think it will be fun for people at the rodeo to see who comes out on top.”

On a recent afternoon, Hundley and Darby Rodeo Queen Elle Bucher stepped up alongside Darbacious in the corral where he’s been living in semi-retirement for a photo shoot. The bull was far more interested in the trough of grain than he was with the two young people giving him a pet.

But Ruark said he becomes a different animal when he gets into the arena.

A few years back, a rodeo bullfighter met Ruark and Darbacious at the Darby arena with the idea of getting his photograph with the well-known bull. As soon as the bull saw the bullfighter dressed in his clown attire, he lowered his head and charged.

“He saw how he was dressed and he just changed,” Ruark said, with a smile. “That guy was lucky to be able to get out of there.”

While Ruark was telling that story, his telephone rang. He took one look at the number and told those standing around that he was going to have to take that call. It was from Wrangler and they were interested in being a sponsor at some of next year’s rodeos.

“That’s something that I’ve noticed as rodeo has continued to grow here in Darby,” Ruark said. “It’s amazing how people want to be part of a winning team. There’s something happening here. I think it’s just going to continue to get bigger and bigger.”

In addition to the regular rodeos that start in June with the one-of-a-kind Riggin’ Rally followed by the Senior Pro Rodeo and then the Twisted Nut in July and the NRA sanctioned Wild West Rodeo in August, the arena will also host the state junior high rodeo in May.

“Last year was the best year that we’ve ever had at the Darby arena,” Ruark said. “I think this upcoming year might just top that.”

It’s been less than two months since Ravalli County started its first treatment court that aims to break the cycle of addiction, crime and incarceration. District Judge Howard Recht feels like he’s already seen its potential.

“We know that grizzlies are coming,” People and Carnivores' Brittani Rosas said. “We don’t want anyone to be caught off guard. We have a prime opportunity here in the Bitterroot to get ahead of it before it really begins.”

Sharp-tailed grouse are the only bird species documented by Lewis and Clark that have disappeared from western Montana. A new reintroduction effort aims to rectify that.

We in the West are witness to the impacts of climate change. Montana and other Western states are now in unprecedented drought conditions.

Carrie Hunt - the founder and director of Florence’s Wind River Institute – Wind River Karelian Bear Dog Partners - has spent most of her life working to reduce conflicts between humans and bears.

Hughes Creek road back in court

Getting ready for grizzlies: Public and private entities work to reduce bear conflicts

Black bears have learned that private land between north and middle Kootenai Creek roads is a smorgasbord of garbage, bird feeders and fruit trees.

A Victor teenager was killed Monday when a firearm being handled by a friend was accidentally discharged, according to Ravalli County Sheriff Steve Holton.

Darby Rodeo Association Queen Elle Bucher and Darby bull rider Devyn Hundley pose next to Darbacious. The well-known bull has yet to be ridden, but 15-year-old Hundley plans to give him a try at the Twisted Nut Festival bull riding event next July at the Darby Rodeo Arena.

Darby Rodeo Association president Cal Ruark gives the bull he named Darbacious a pat on the back. The bull has been the official mascot of the Darby Rodeo Arena for several years. He's never been ridden, but a young Darby rider plans to try at the July Twisted Nut Festival bull riding event.