Hidden history: Archaeologists turn to technology to look for clues at Fort Owen
0 Comments
Share this
{{featured_button_text}}
1 of 2 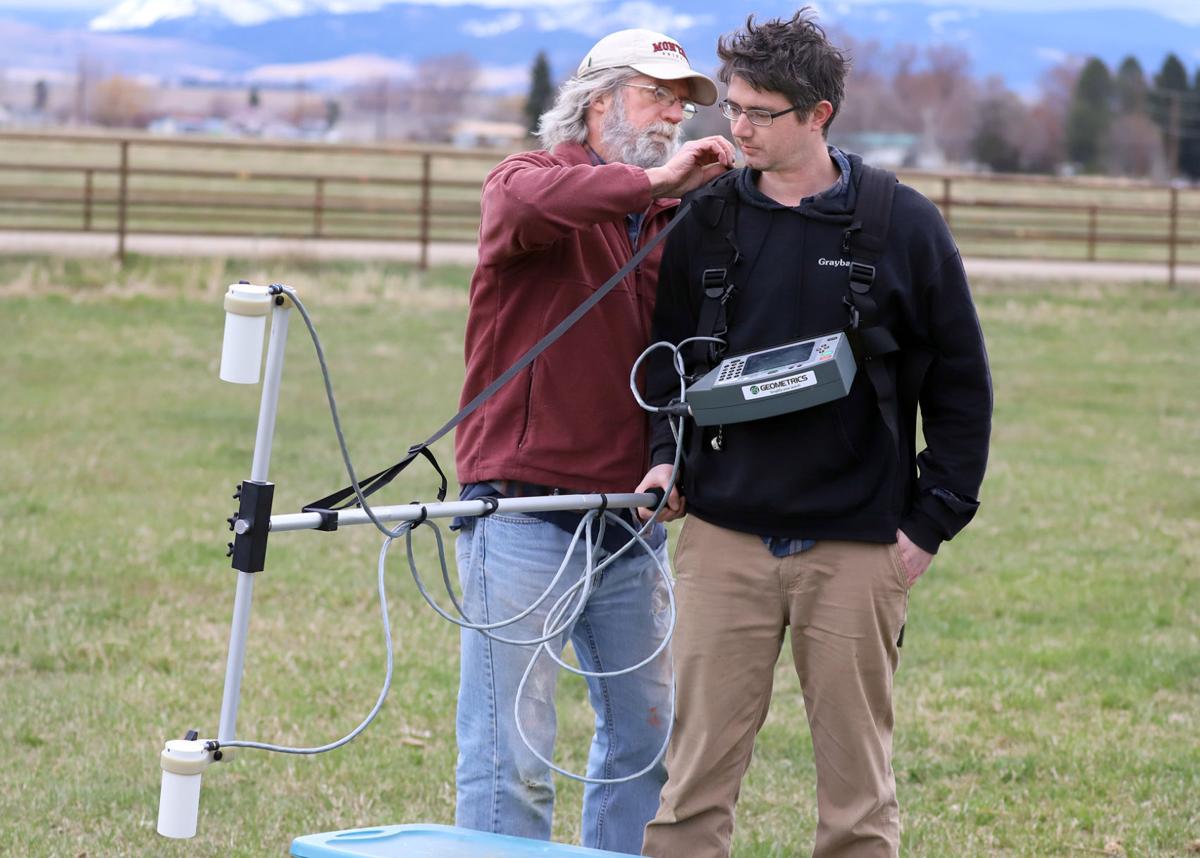 Western Cultural archaeologists Dan Hall and Jay Vest prepare the magnetometer they used Thursday to gather data from a site south of Fort Owen State Park that will eventually be a new parking lot. 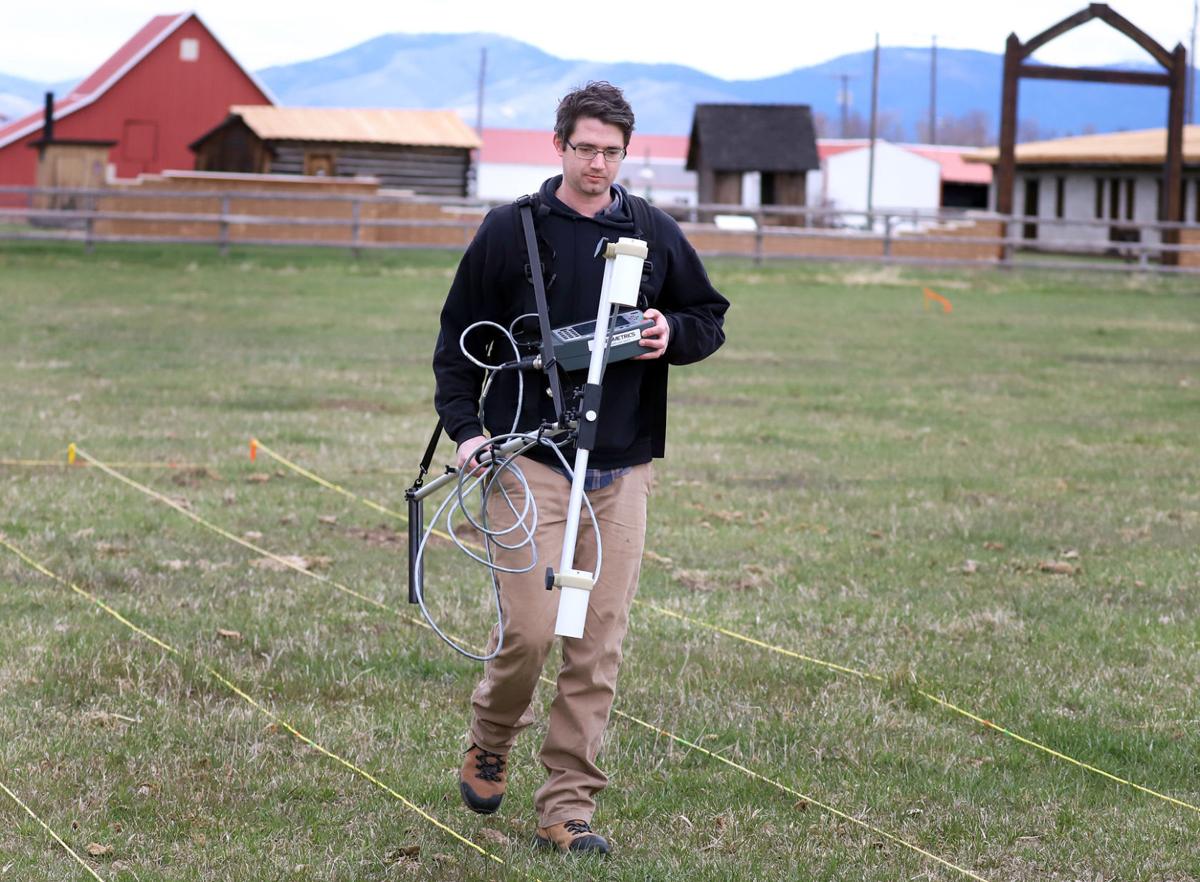 Jay Vest, an archaeologist with Missoula's Western Cultural firm, uses a magnetometer to gather data about information at the site that will eventually become the new parking lot at historic Fort Owen State Park north of Stevensville.

By summer, the acre just south of historic Fort Owen is scheduled to become a much-needed parking lot.

Before that happens, archaeologists will have one more opportunity to uncover history with the help of the same high-tech equipment that uncovered fire hearths used by Lewis and Clark at Travelers’ Rest over 20 years ago.

On Thursday, Dan Hall and his team of archaeologists from Western Cultural of Missoula were setting up the grids they’ll use to map the area with a magnetometer at the site just north of Stevensville.

“It’s basically a magnetic survey,” Hall said. “The principle behind this is when soils are laid down, the iron sulfide particles in the dirt orientate toward magnetic north. When Mother Nature comes through or man and disturbs the soil, we can see those disturbances using this device.”

“If you build a fire, you magnetize the soil,” he said. “If you build a building and then remove it, the building’s foundation is still visible in the magnetic properties you’ve distorted. All of these things are detectable.”

“Essentially, what this does for me, as an archaeologist, is to make it so I can see into the dirt,” Hall said.

And this particular piece of dirt could hold historical treasures that could unlock secrets about one of Montana’s most important sites of American settlement.

Fort Owen is the site of many firsts. Before it became the state’s first permanent white settlement, it served as home to the first Catholic Church in 1841. The state’s first sawmill, first gristmill, first agricultural development, first water right and first school for settlers happened there too.

Despite its historical significance, the small state park surrounded by a private ranch has long been a hidden historical gem due to its lack of available parking. Currently, there’s only room for two cars.

A change in ownership and a $507,500 Helmsley Charitable Trust grant obtained by the Montana State Parks Foundation is set to change all of that.

“We have long had the desire in state parks to improve the access to Fort Owen,” said State Parks Heritage Program Manager Rachel Reckin. “It’s such a remarkable place, a true cornerstone of Montana, but it’s been a tricky place to visit.”

Fort Owen is one of few sites in Montana on the National Register of Historic Places that has been designated as having national significance. A new partnership with ranch owner Myla Yahraus, a local grassroots organization called Friends of Fort Owen and the Montana State Parks Foundation are working to resolve the issues with access while creating new opportunities for restoration and interpretation at the site.

Yahraus agreed last year to sell just a little under an acre for a new parking lot. The grant helped pay for that and the upcoming construction project.

Before that construction can get underway, Reckin said it’s important to know what people will be parking on.

Historical paintings and photographs suggest that Native Americans used the site to camp when they visited the fort. Reckin said there may have been other structures there too.

Using metal detectors to guide their excavations, Hall and his team unearthed a metal part from a flintlock rifle called a frizzen and a part of wagon axle last fall, but none of what they found confirmed that Native Americans had camped there.

“They were able to confirm that there is archaeology scattered all over the place,” Reckin said. “The magnetometer could uncover new information about the site. It’s important that we find out as much as we can before the parking lot is built.”

The plans call for covering the area in a ground fabric and then burying that with material to protect any cultural resources that might be on the site.

Hall plans to take the data his team gathers Thursday back to his office Friday to begin creating the maps that could unlock secrets from the past. They will return next week to excavate sites that show promise.

“We will have a map that will allow us to go with great precision and say there’s something in the ground right there,” Hall said. “For an archaeologist, that’s pretty outstanding … Hopefully, there will be a couple of anomalies that look like what we found at Travelers’ Rest and we can pop right on those.”

Margaret Gorski of the Friends of Fort Owen said the archaeological work is just the beginning of many good things to come for the historical site. The group recently received a $9,500 grant from the Montana History Foundation that will be used to help preserve and restore the adobe barracks structure that was built in the 1850s.

“The idea is to research and analyze the existing wall and then try to find a source of material that can be used to repoint the bricks,” Gorski said. “It’s all coming together. The Friends of Fort Owen are working toward being part of the solutions there.”

US to spend $2.1B to improve infection control

US to spend $2.1B to improve infection control

Like many other small businesses in the Bitterroot Valley and beyond, David Evans is having a hard time finding new employees to work at his family-owned Hamilton business.

Every year, BRID crews spend hours scouring the inside and out of the massive pipeline for tiny pinholes that could quickly turn into something much worse when the pipe begins transporting millions of gallons of water to downstream irrigators.

Western Cultural archaeologists Dan Hall and Jay Vest prepare the magnetometer they used Thursday to gather data from a site south of Fort Owen State Park that will eventually be a new parking lot.

Jay Vest, an archaeologist with Missoula's Western Cultural firm, uses a magnetometer to gather data about information at the site that will eventually become the new parking lot at historic Fort Owen State Park north of Stevensville.