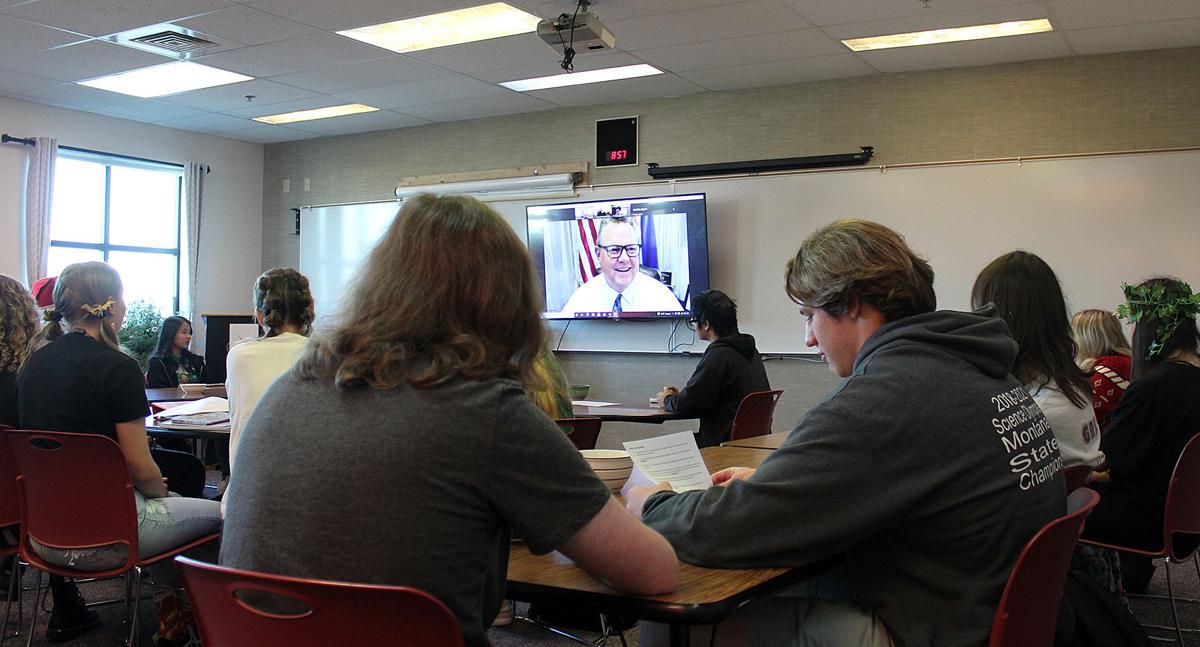 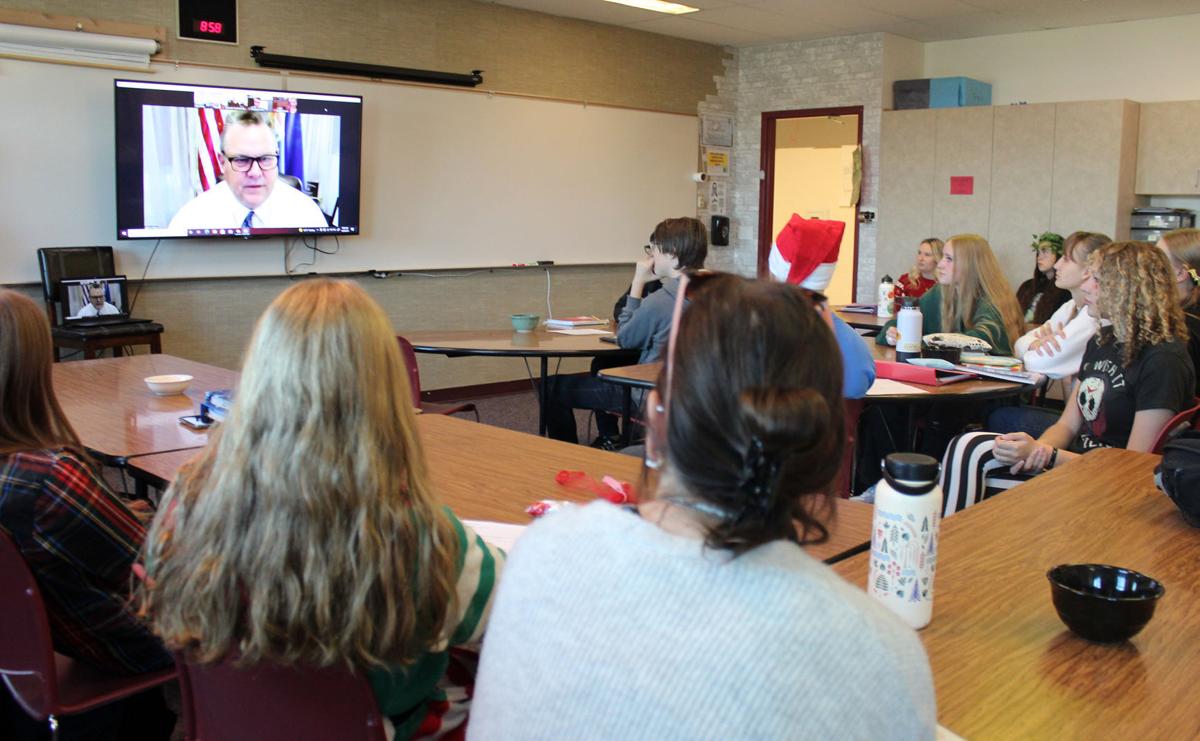 Educator Kiah Nisly had arranged the opportunity for her students to have a visit with the senator.

“The future electorate of America sits in my classroom so I like to create as many opportunities as possible for the future voters to talk to elected officials,” she said. “These visits also let students hear how the government is run straight from the horse's mouth.”

Tester started the online session with a brief family history then launched into answering the questions students had prepared.

Senior Broncs asked about Second Amendment rights, the process of a bill through committee and Tester’s opinion on abortion.

Emma Mitchell asked the question, “What could you do to help alleviate the trafficking and disappearances of Native American women?”

Tester explained that the Federal Bureau of Investigation (FBI) and the Bureau of Indian Affairs (BIA) are working on the problem but both are understaffed.

“Indian tribes are also understaffed,” Tester said. “There is a lack of trust between Native American people and law enforcement that needs to be re-established. Often these crimes don’t get reported in a timely manner and they need to be reported as soon as the person comes up missing.”

When Cadogan Wheat asked if “defense spending should be decreased to allow for more spending on social services,” Tester quickly answered, “Not right now.”

“I can tell you with the threat that China poses to us in this world, and it’s a serious threat, we need investments in the China region to keep this country safe and to keep China at bay,” Tester said. “We need to make the military justify every expense they have, but I can tell you there are some investments we need to make in the Pacific and Indochina region that are critical.”

Students also asked Tester why he was elected in a “red” state and what are his goals for this term.

Tester answered that he believes he was elected because of his record, accomplishments and his excellent staff.

“I’m proud of my record and they need to look at it from a Montana perspective and a national perspective,” he said.

His goals for this term, which he’s already achieved, include two chairmanships – Defense Appropriation and Veteran’s Affairs.

“The [defense] goal is to make sure they have the money they need and make sure they’re spending it properly,” Tester said. “[For the VA] we’ve got a bill called the ‘Cost of War Act’ that deals with toxic exposure. It’s been around with us for generations. We’ve never given the VA the ability to deal with toxic exposure very well, so it has taken an act of Congress to get those covered.”

Tester was passionate about the country of origin labeling of beef.

“The problem is that if you go to the meat market and look at a package of hamburger it will have a USDA seal on it,” Tester said. “People think it is a product of the U.S.A., it isn’t. What it means is that the U.S. Department of Agriculture inspected it and it is safe to eat.”

He said the meat could have come from Argentina, Brazil, Canada, Mexico, the United States, or any other country in the world.

“The consumer should have a choice and if it a product of USA it should be labeled as a product of USA along with the USDA sticker,” Tester said. “Which if it didn’t have the USDA inspection sticker it wouldn’t have been in the meat counter to begin with. I think it would give consumer choice. We raise the safest meat in the world.”

He said the USA labeling would allow the nation’s cow-calf operators and small and medium-size feeders the opportunity to market their meat to the American consumer.

“I think that would result in more profit,” Tester said. “Everything else has the label ‘Product of Canada’ or ‘Product of Mexico.’ Why not do the same thing for beef? Our bill gives the USDA a year to get a WTO (World Trade Organization) mandatory manufacture of origin labeling law in place. It’s about the consumers and the producers, both can win.”

Tester closed the Internet video chat with advising students to maximize their opportunities in school.

After the session, students said they appreciated the time with Tester, enjoyed hearing his point of view and valued that he wasn’t just siding with his party but choosing what was best for Montana.

Students shared some of their thoughts on the session with Tester.

Lauran Roberts said, "Senator Tester seemed levelheaded and I supported some of his positions on certain issues. I really liked how he made time to talk to students" -

Ryan Jordan said that Tester, “did a good job not alienating one side and was incredibly knowledgeable.”

"Overall, [Tester is] a nice guy and not what I thought a politician would be like,” said Johnny Dang.