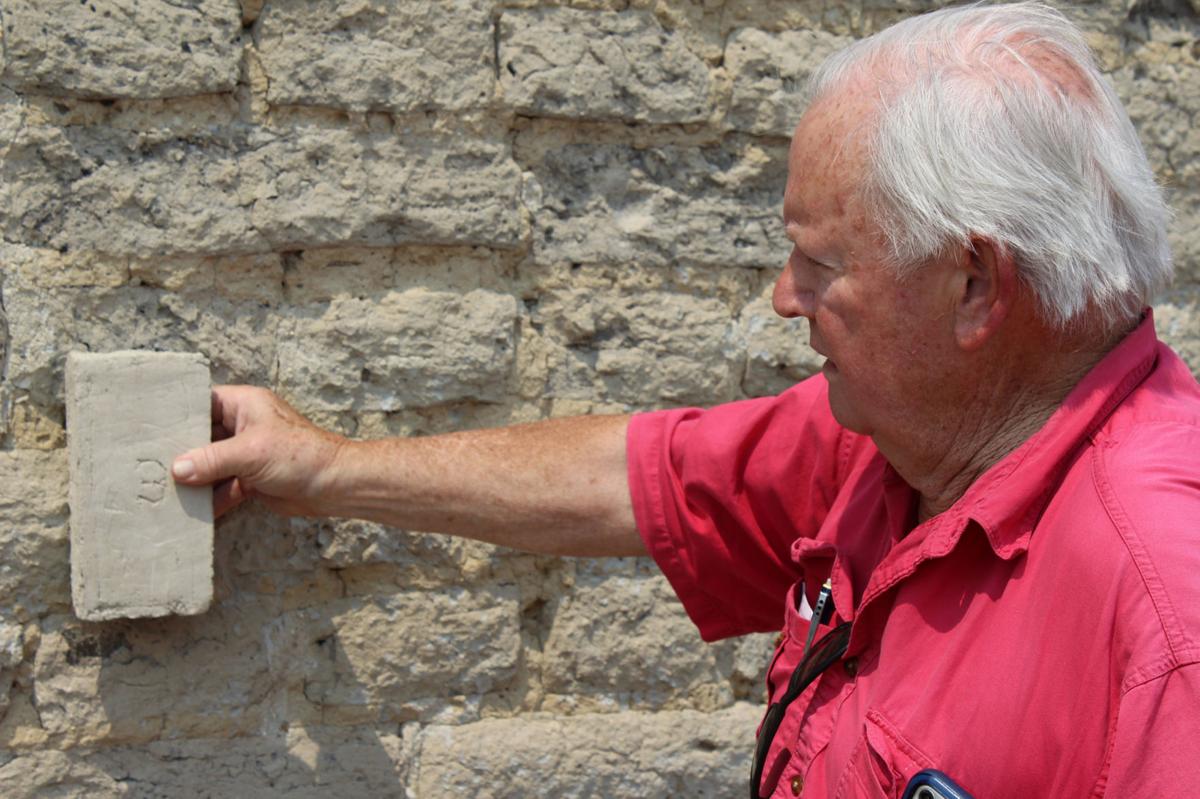 Friends of Fort Owen board member Philip Maechling compares an experimental brick he made with the original adobe wall of the East Barracks at Fort Owen State Park. 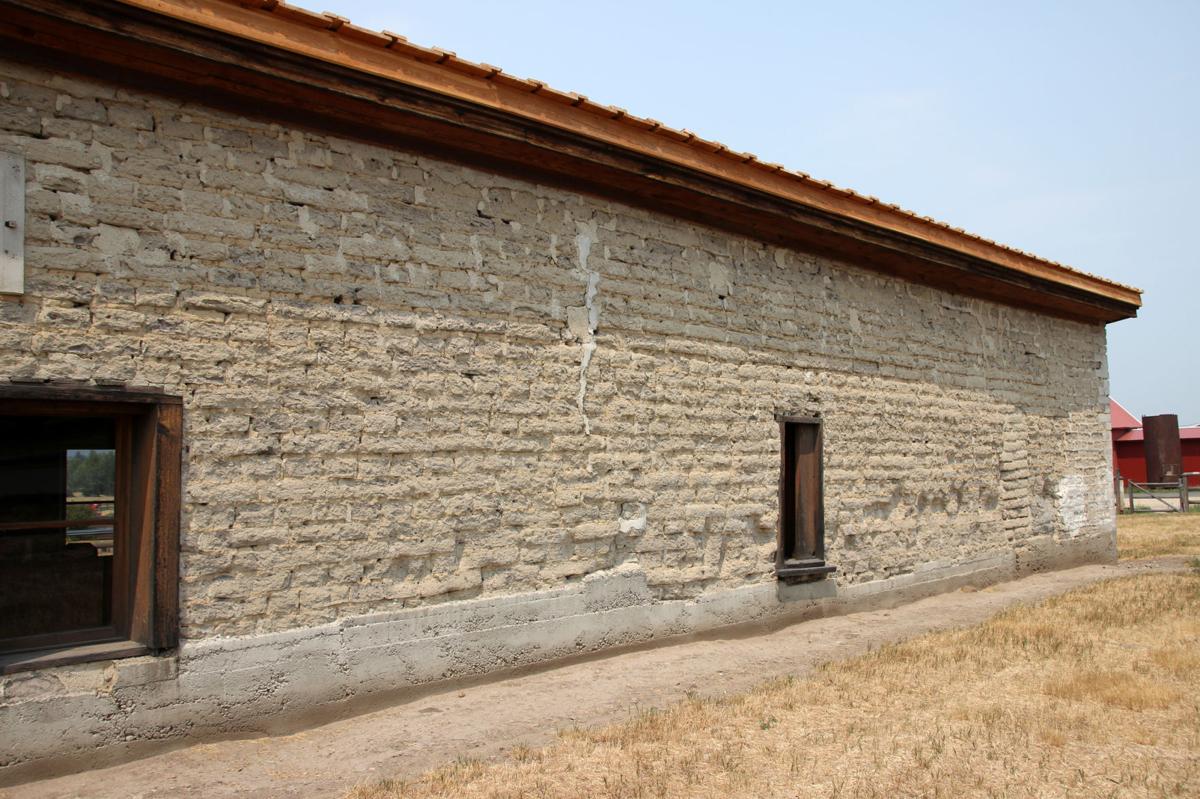 Restoration is needed on the original exterior adobe wall of the East Barracks as damage was caused by time, weather and irrigation of the Fort Owen Ranch. 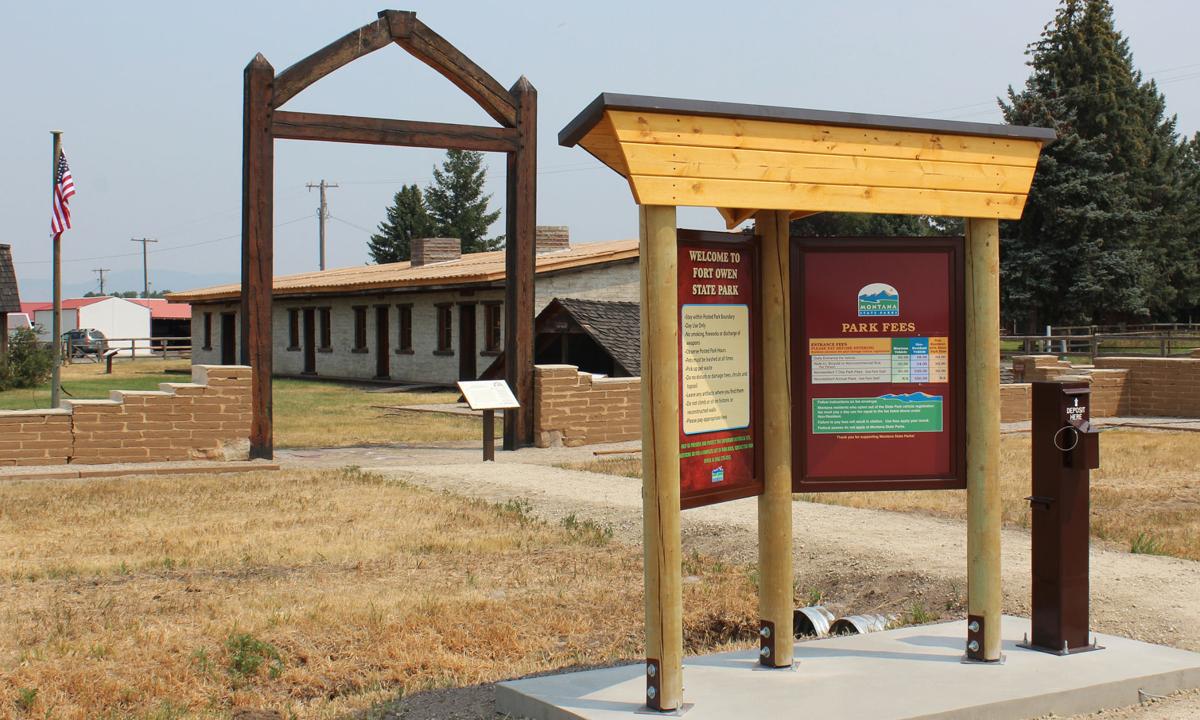 The Friends of Fort Owen State Park are looking for a local deposit of grey clay or sticky silt in the Bitterroot Valley to help with a restoration project on the East Barracks. Contact Philip Maechling at 406-529-4873. 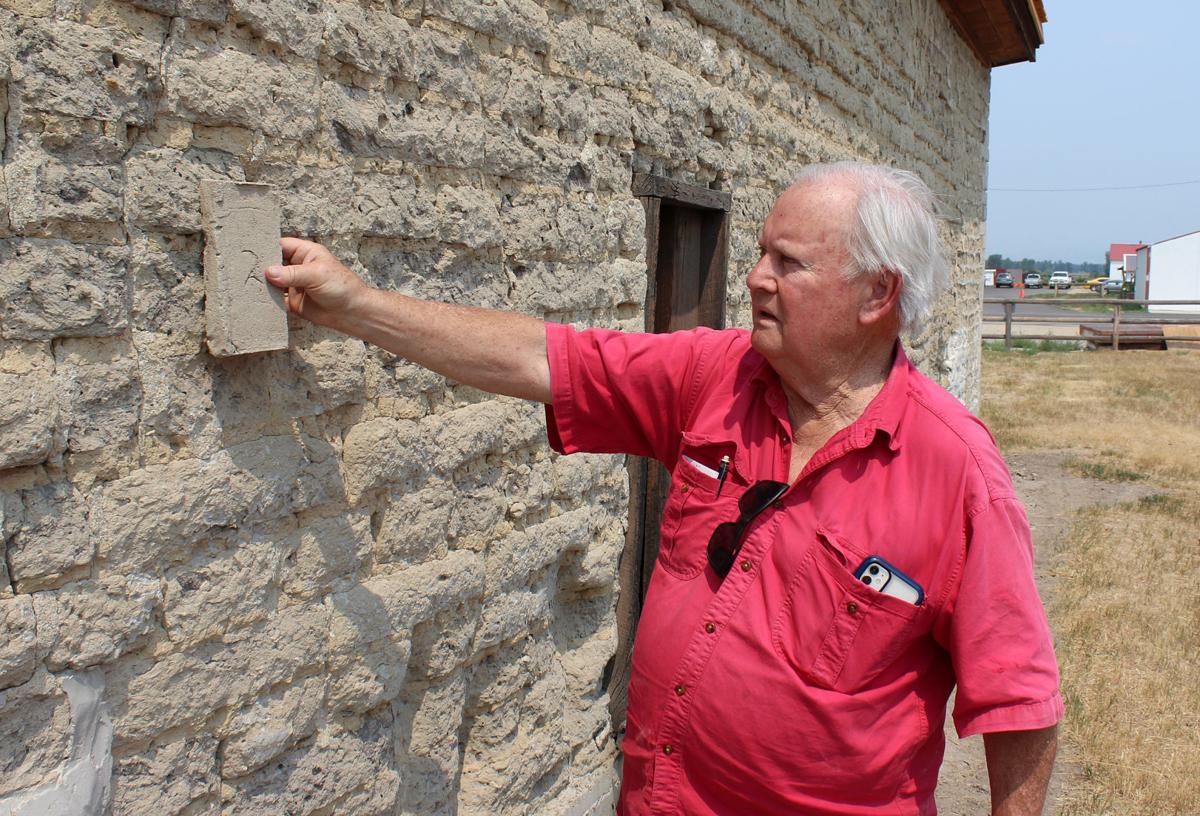 Friends of Fort Owen Board Member Philip Maechling holds the brick he made from local sand and purchased “fire” clay to see if the color matches the original adobe bricks on the East Barracks at Fort Owen State Park.

The Friends of Fort Owen State Park are asking for community help in searching for a deposit of clay or sticky silt in the Bitterroot Valley, to help with a restoration project.

The original exterior adobe wall of the East Barracks has been damaged by time, weather and irrigation of the Fort Owen Ranch.

“The East Barracks contains the oldest remnants of pioneer settlement in Montana and is the most historically significant structure in the park,” said Lorraine Hingston Roach, board member and volunteer.

The Friends recently received a $9,500 grant from the Montana History Foundation and is providing $7,000 in cash and in-kind match to work in partnership with Montana State Parks on restoration.

Only the east wall is original. The other walls were restored in the 1950s with concrete blocks made to look like adobe, purchased in California and shipped to Montana.

“From a historic preservation standpoint you would only do this if you had no alternative if you couldn’t find actual adobe,” said Philip Maechling, a member of the Friends board and the Montana Heritage Commission. “What we’ve been finding out is finding the clay John Owen used to make this is harder than we thought. We’re hesitant to use anything but original materials.”

Owen built the structures in the mid-1850s before any others in western Montana.

Maechling said the biggest surprise, and unique in Montana, is that the architectural type of the fort is the same physical shape as a Mexican hacienda. It had two long buildings on either side of a central courtyard/corral and space for a garden. On each corner were bastions — 14-foot tall towers with windows to shoot from — to defend the settlers at the Fort.

It was made from adobe bricks.

Maechling ponders why this style is in Montana where there is ample wood, but not much clay.

“When we think of architecture in the southwestern United States we think of the Pueblos, but those were stone, not adobe,” Maechling said. “Adobe was a Mexican technology brought by the Spanish, the Spanish learned it from the Moors who came from North Africa and invaded Spain in the 9th century, and they got it from the Persians. So the technology for adobe goes back 5,000 years.”

The quest for clay is unusual, but so is the historical knowledge about how to make the repairs.

“Our interest is to help Montana State Parks figure out how to repair these damaged portions,” he said. “The interesting part is finding a way to match this. Mortar has more clay and bricks have more sand and you can feel the difference in the textures of the bricks.”

He found that changing the sand to clay ratio changes the color and strength of the bricks. Natural variations between the adobe bricks may be due to the day the adobe was mixed.

“They were mixing the adobe in pits with stomping cattle as workers,” Maechling said. “They didn’t have quality control at that time, it’s all in the experience of the operator.”

Local sand and a light grey clay were dumped into the pit along with organic material like manure, straw, or hay to stabilize the bricks and hold moisture.

Finding the pit where the adobe was made is the challenge, as it is not on any early maps, Maechling said.

“In John Owen’s journals he talks about the location as being 800 feet from the east bank of the river somewhere in the vicinity of Fort Owen, but the river may have moved,” Maechling said. “If you look at lidar, which is radar of the earth, it shows the high definition of physical changes. You can see the oxbows and slews to the south but this side of the road was filled in for farming.”

Another complication is that the fort was built when there were no roads and there is a possibility that the cut-off road from the Wye to Stevensville may have filled up the clay pit.

“We know he had two ‘tables’ where they dug the clay and mixed in manure and other binders to form and dry the bricks,” Roach said. “If we can find the original clay pits, then we can determine the right formula for the adobe. Finding another native clay source nearby is a good alternative.”

“I wanted to show that we’re making progress in terms of 5,000-year-old technology,” Maechling said. “When they originally mined the sand for this they didn’t have a quarter-inch screen for the sand. They were doing this on a humanly possible industrial scale, 500 bricks a day. So, thousands of thousands of bricks. No one has counted all the bricks or guessed at how much this wall weighs, but a typical brick this size weighs about 35 pounds.”

The Friends of Fort Owen are asking the community of Stevensville and the surrounding area if they know of or have a deposit of native clay or sticky silt on their property to contact Maechling at 406-529-4873.

“We’re looking for someone to let us come and sample the clay,” Maechling said. “We don’t need a lot of it, a small pickup load — a few yards of clay would do us very well.”

Maechling is optimistic that clay anywhere in the Bitterroot Valley could be a match, as Glacial Lake Missoula filled the area with water up to 4,000 feet deep.

Part of the Montana History Foundation grant is for the research into the adobe sources and process, and part is for the Friends to sponsor a public workshop on Saturday, Sept. 18, to provide a hands-on learning experience on how adobe bricks are made, the source of the clay for Fort Owen, who made the blocks and how the Fort Owen Trading Post was built.

“We're calling it a ‘Mud Party! Adobe Workshop’ because it will include a hands-on, get-your-hands-in-the-mud experience with making adobe blocks,” Roach said. “It will be a fun and educational experience for kids of all ages.”

Maechling said the workshop is for anyone interested in the adobe process.

“We’ll have the makings of adobe bricks, people can make some bricks,” he said. “We hope to have some bricks already made, that they could take, donations would be accepted for the Friends of Fort Owen. It should be fun and entertaining.”

“The Friends of Fort Owen raised $25,000 to help Montana State Parks do the roof,” Maechling said. “The wood in the window frame headers and lintels may be original. The windows are clearly not original. The concrete was put on the foundation to shore it up so the building wouldn’t fall apart.”

The Fort Owen State Park also has a newly paved road and an upgraded parking area, paid for in part by the Montana State Parks Foundation.

The North Valley Public Library in Stevensville has exciting programs for adults, teens and children including Summer Reading and SpectrUM Summer of Science.

“Angi & Erin's Bacteria Bazaar” is a festival celebrating all things fermented on Sept. 11 and 12 at the Rocky Mountain Grange.

Comments sought for proposed repair of bridges south of Hamilton

The Montana Department of Transportation (MDT) invites public comment on their proposal to repair the bridge over the East Fork of the Bitterroot River on US Highway 93, five miles southeast of Conner.

Large wood-painted quilt squares mounted on barns or other large buildings have popped up across the country and maps of their locations have provided an economic boost to communities.

Daly Mansion “Daly Days: Back to Our Roots” on Saturday

Friends of Fort Owen board member Philip Maechling compares an experimental brick he made with the original adobe wall of the East Barracks at Fort Owen State Park.

Restoration is needed on the original exterior adobe wall of the East Barracks as damage was caused by time, weather and irrigation of the Fort Owen Ranch.

The Friends of Fort Owen State Park are looking for a local deposit of grey clay or sticky silt in the Bitterroot Valley to help with a restoration project on the East Barracks. Contact Philip Maechling at 406-529-4873.

Friends of Fort Owen Board Member Philip Maechling holds the brick he made from local sand and purchased “fire” clay to see if the color matches the original adobe bricks on the East Barracks at Fort Owen State Park.