A Corvallis man was charged with felony intimidation after allegedly threatening to kill a man who was attempting to walk to his home from his car. 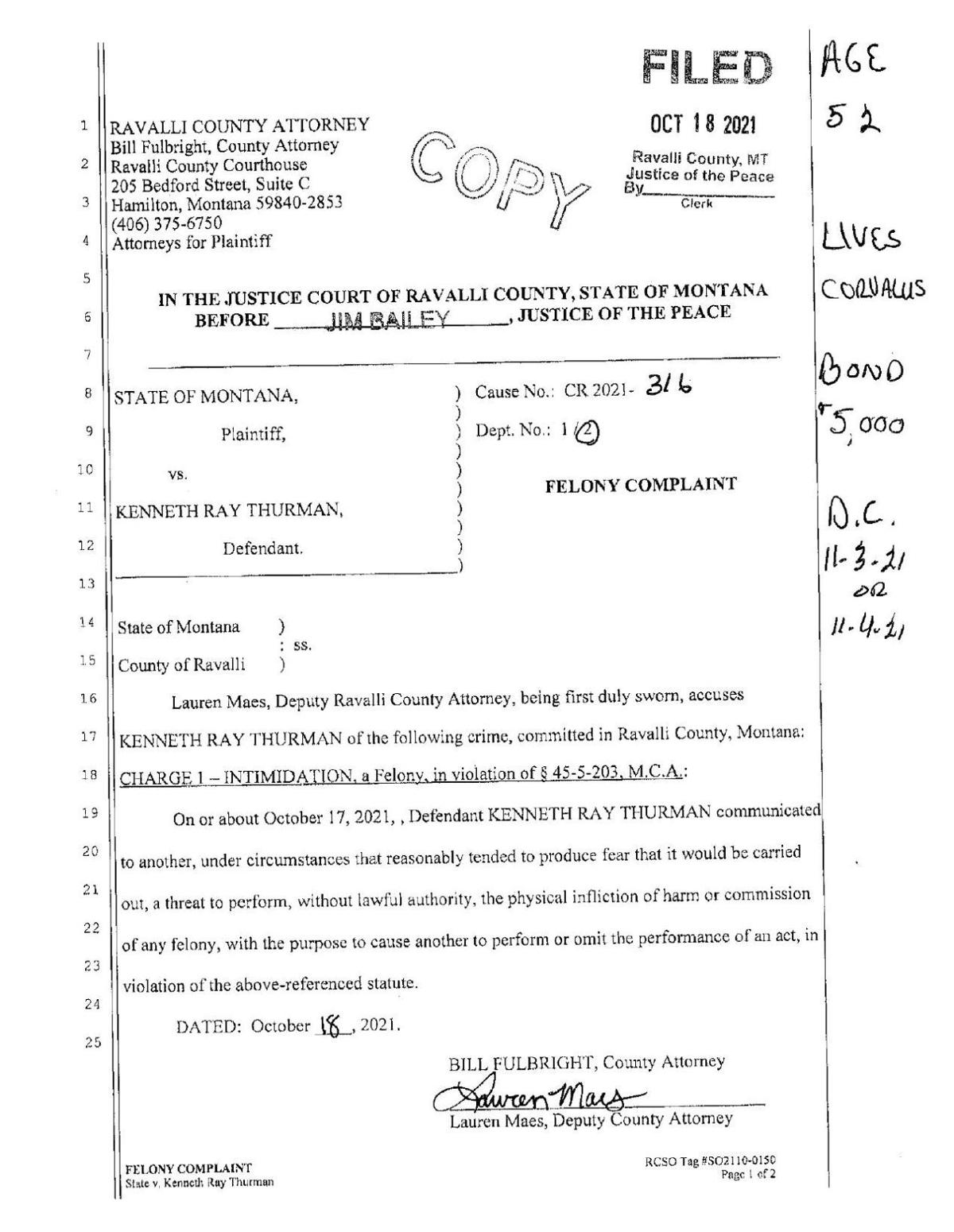 According to the charging affidavit, a Ravalli County sheriff’s deputy was dispatched to a Corvallis residence on Sunday, Oct. 17 for a report of a disturbance.

The deputy found the man who reported the disturbance standing on the sidewalk in front of his home. The man told the deputy that Thurman and a woman had attacked him, came after him numerous times and threatened to kill him, the affidavit said.

The man said he had just returned home and had remained in his car for a while in order to text his wife. While he was in the car, Thurman walked by and stumbled into the man’s vehicle.

The man told Thurman: “Hey sir, watch out for my car please.”

At that point, the man told the deputy that Thurman immediately became aggressive and allegedly told him, “I prosecute people like you” and “I kill people like you in a heartbeat.”

The affidavit said the man then suggested to Thurman that he not drive because he appeared to be under the influence of alcohol. At that point, the woman with Thurman exited her vehicle. She also appeared to be intoxicated. She proceeded to pull the man's driver’s side door open.

When Thurman and the woman returned to their vehicle, the man exited his and tried to avoid the pair as he attempted to get to his residence. The affidavit said Thurman got out of the vehicle and again threatened to kill the man. The man told the deputy that Thurman reached behind his back as if reaching for a gun.

He said he was in fear of being shot.

The deputy noted fresh handprints and rub marks in the dust on the man’s vehicle that were consistent with the man’s story.

The man also provided a partial recording of the incident from his phone. The affidavit said the deputy recognized Thurman’s voice and the voice of the woman.

The affidavit said Thurman was recorded telling the man to leave. The man  responded that he wouldn’t since this was his home. At one point, Thurman allegedly told the man to “shut the (expletive) up or I’m going to kill ya in a heartbeat.”

The deputy noted that throughout the recording, the man did not appear to be disrespectful of Thurman and tried several times to end the argument.

Thurman was placed in handcuffs.

The affidavit said he initially denied he had threatened to kill the man but then said he was trying to defend the woman.

Two people faced charges in Ravalli County Justice Court Thursday that they accosted the officers attempting to arrest them in separate incidents.

A Hamilton man charged with firing an estimated 67 rounds through the door of his apartment after police responded to a domestic abuse call pleaded guilty to attempted deliberate homicide Thursday.

A crash on the Eastside Highway that killed a Stevensville woman and sent three children to the hospital has resulted in a negligent homicide charge for the vehicle’s driver.

Surveillance video from a Ravalli County business led to the arrest of a Sula man on felony charges of distribution and possession of dangerous drugs.

It’s been less than two months since Ravalli County started its first treatment court that aims to break the cycle of addiction, crime and incarceration. District Judge Howard Recht feels like he’s already seen its potential.