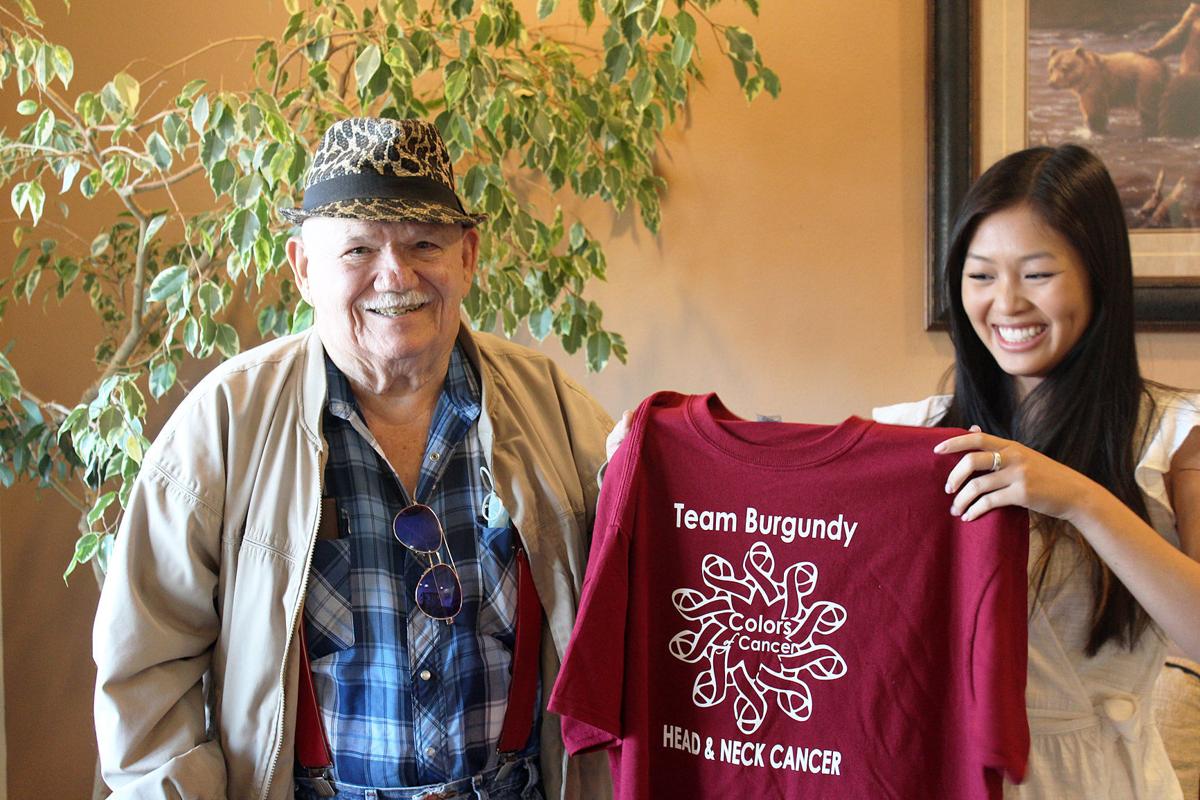 Delnor “DeWayne” Sales has beat cancer multiple times and is the inspiration for the Colors of Cancer campaign to add a burgundy team recognizing those who have battled head and neck cancers. Sales and Daly Hospital Foundation Intern Thessley Nguyen are holding one of the new Team Burgundy T-shirts that will be worn by the Hamilton High School girls soccer team this week during their warm-ups. 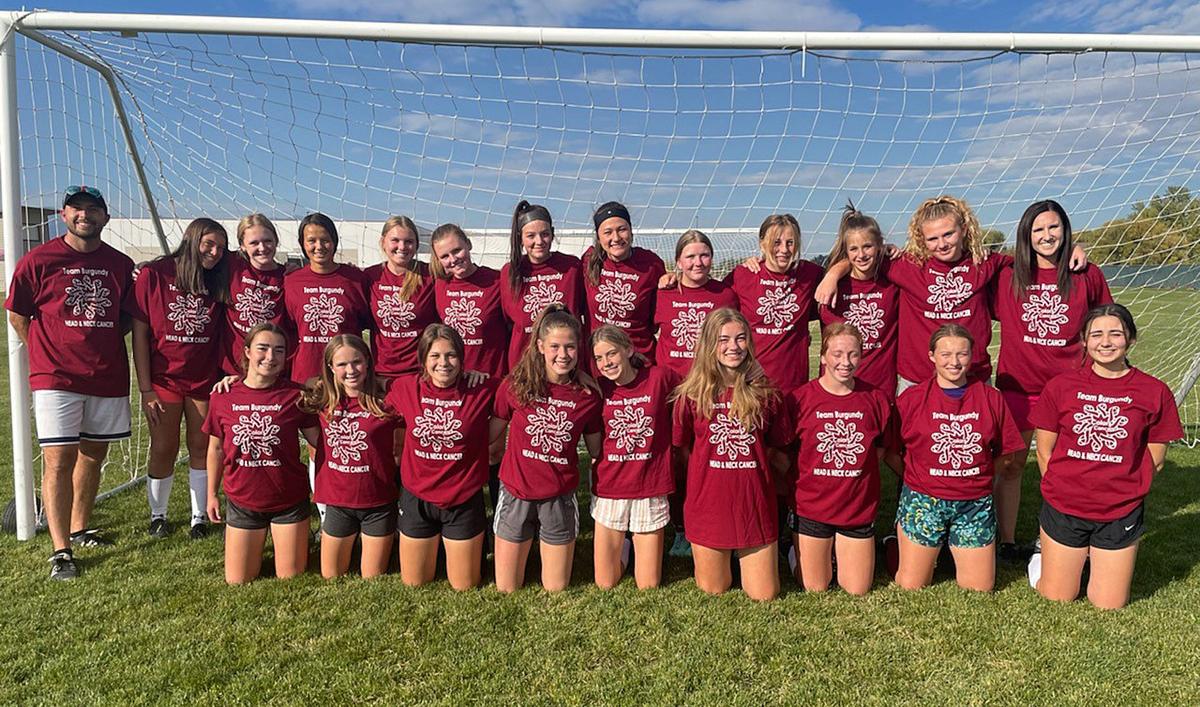 Delnor “DeWayne” Sales has lived in the Bitterroot Valley for 44 years and has beat cancer multiple times.

"I'm hesitant to tell my story because I don't like the attention," he said. "But if I can help one person to keep smiling through the hard times, it will be worth it."

Sales' first diagnosis was related to skin cancer on his nose 25 years ago. His second diagnosis was lymphoma and the discovery of seven tumors in his throat, two in his chest and one in his stomach. He felt the lumps but didn’t have any other symptoms. He said his ear, nose and throat doctor "insisted it wasn't cancer since he never smoked or drank alcohol."

“My ENT doctor was flat convinced it was only an infection, so he was treating it like an infection until my CAT scan,” Sales said.

The CAT scan found a lump on his thyroid, so they scheduled a simple biopsy.

“I thought it would be an easy procedure to remove the lump,” Sales said. “But then I asked the surgeon to also look at a very small lump on the side of my neck that bothered me when I shaved.”

After test results, the lump on his thyroid was benign and the small one was cancerous.

“They told me I was between stage 3 and 4 and that was devastating,” he said. “I went through all the emotions: anger, ‘why me’, sadness … but then I kicked myself out of bed and told myself, ‘Get your act together, DeWayne.’ I knew I had at least a 50/50 chance to beat it.”

When his treatments were done, he said he "walked out of that hospital free and clear of cancer."

“The Fort Harrison VA hospital in Helena had wonderful doctors who were very good to me, but the distance was difficult especially when I had to have chemotherapy every 13 days,” Sales said.

Sales is a veteran of the US Air Force, 1959-1962, whose work specialized in nuclear weapons.

“I joined the Air Force to see the world, but spent three years in Detroit instead,” he said. “It was during the race-riots, an eye-opening experience for this Oklahoma boy.”

As a commercial pilot, Sales moved to the Bitterroot Valley just after he flew his plane here in 1977 and has loved his busy retirement. He said the only thing that has been difficult living here is the distance required for some healthcare services.

During his chemo treatments for lymphoma in Helena, he “lost every hair on my body except my mustache,” he said. “I didn’t have any eyelashes or eyebrows, but my mustache stayed the same. So that’s why I never shave it off now.”

Sales has had additional health battles such as suffering a stroke five years ago.

“It’s like half my body died,” he said. “I couldn’t walk, talk and was partially blind in one eye for a while. It took me a year to learn to sign my name again. I was right-handed before my stroke, but now it’s like I still have two left hands. My stroke was far more traumatic than cancer treatments, so there’s one bright side for you. However, lymphoma was far more painful.”

Daly Hospital Foundation Intern Thessley Nguyen met Sales at Hamilton Farmers Market and was inspired by him to get the ball rolling to create a new Colors of Cancer team color this year — Team Burgundy, recognizing those who have battled head and neck cancers. The Hamilton High School girls soccer team will be showing support for this new color team by wearing the burgundy T-shirts during warm-ups of games during homecoming week.

Currently, Sales is waiting for his biopsy results after he noticed a lump in his left breast and had a mammogram.

"I know men think they have chests not breasts, but we need to accept that mammograms are for everyone, especially if you feel a lump," he said. “I’ll know the diagnosis of the biopsy (this week); I’m a little bit anxious about that."

Sales believes the best medicine anyone can have is a positive mindset.

“Lymphoma was intensive, and I was scared to death, but I never had a doubt in my mind that I wouldn’t beat it,” he said. “Be convinced you’re going to beat (cancer) and the experience will be entirely different. I’m 100% convinced that your attitude will determine whether you survive cancer or not.”

The Colors of Cancer campaign continues through October with every donation to the Daly Hospital Foundation matched by the hospital and earmarked for the construction of the new cancer and infusion center.

Some featured Colors of Cancer events will include: Friday, Oct. 15 - Pint night at Nap's Grill Saturday, Oct. 16 - "Smoking for Health" Traeger Grill lunch at Evans' Ace Hardware to support Team White - lung cancer as well as raffle tickets sold all month and round-ups at the cash registers every Saturday.

On Wednesday, Oct. 27 is the "Art & More Show" in MDMH's Blodgett Canyon Conference Rooms. Donations of quality art are now being accepted and could be used to freshen up a hospital office or patient space (employees can swap their office art in the morning). Then in the afternoon, all remaining art will be sold in the silent auction. Some collector's fine art will be on display. All are welcome to bid from noon to 4 p.m.

All month donations are accepted at Ravalli County Federal Credit Union at their Team Pink display.

The Colors of Cancer kick off lunch event with food trucks in the emergency parking lot of Marcus Daly Memorial Hospital was held on Friday.

Healthy Hamilton, a subcommittee of Hamilton City Council, is making at-home rapid Covid testing kits available for free to the families of Hamilton School District thanks to a $75,000 grant received from the Montana Board of Crime Control in 2020 to respond to the Covid pandemic.

Stevensville school staff and students have faced challenges since the beginning of the school due to ongoing construction and COVID. Sup. Bob Moore credits the school's staff, students and community in making it all work.

Ravalli County municipal elections to be conducted by mail

Municipal Elections for Darby, Hamilton and Stevensville will be held in Ravalli County by mail-in ballots, polls will not be open.

Delnor “DeWayne” Sales has beat cancer multiple times and is the inspiration for the Colors of Cancer campaign to add a burgundy team recognizing those who have battled head and neck cancers. Sales and Daly Hospital Foundation Intern Thessley Nguyen are holding one of the new Team Burgundy T-shirts that will be worn by the Hamilton High School girls soccer team this week during their warm-ups.