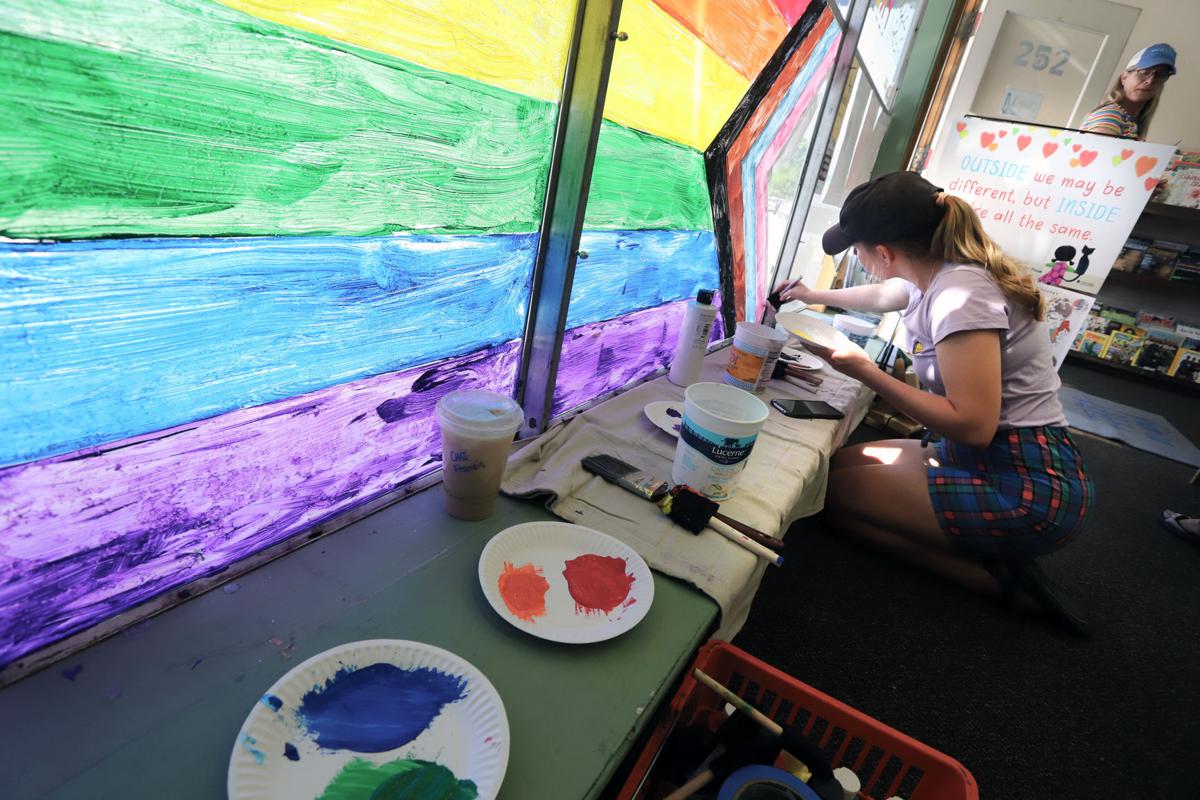 Chapter One Bookstore co-owner Mara Luther offered a group of high school students pursuing the rainbow "Allyship Pride Crosswalk Project" a place to "give voice to their actions and the spirit behind them" by painting the store's windows with rainbows and messages about inclusiveness. 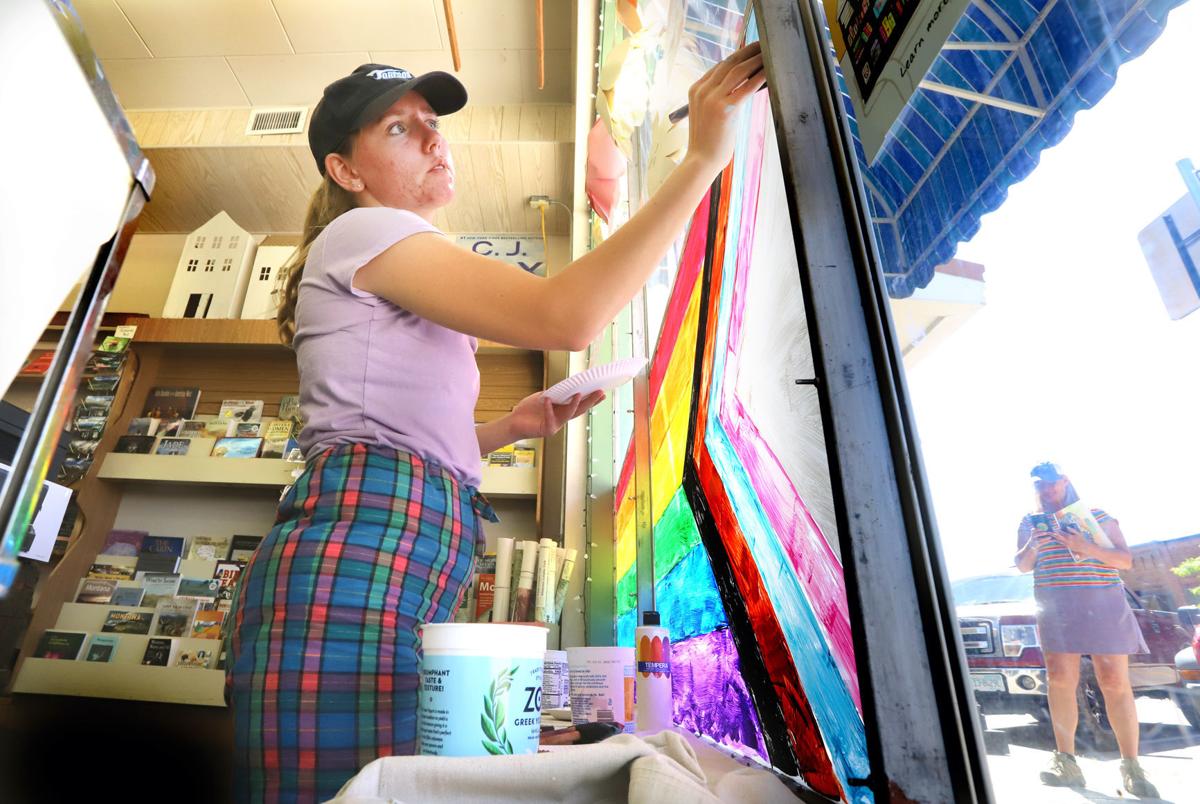 Haley Lords of Corvallis paints a rainbow on the window of Hamilton's Chapter One Bookstore. Lords was one of several Hamilton and Corvallis high school students who painted the windows in support of Pride Month. Some are part of a group who are asking the Hamilton City Council for permission to paint a rainbow "Allyship Pride Crosswalk."

Chapter One Bookstore’s co-owner Mara Luther believes the Hamilton community has a lot of support for people who are different than themselves.

When she heard of the debate over a request to paint four crosswalks in rainbow colors long associated with Gay Pride, Luther offered her windows in support to the group of high school students leading the effort.

On the day before the Hamilton City Council was set to discuss a draft policy for the pavement painting rules in the community, a small group of Hamilton and Corvallis students spent Monday morning decorating the store's windows with rainbows and messages of inclusiveness and diversity.

“When I heard there was such a kerfuffle about this crosswalk, that there's so many negative comments and that it started veering into adding something to city policy, it seemed like Chapter One Bookstore — being right on Main Street and on the corner — was a great spot for these young activists to have a place give voice to their actions and the spirit behind them,” Luther said.

Frances Carrasco, a recent Corvallis High School graduate, has served as a spokesperson for the proposal entitled “Allyship Pride Crosswalk Project” that would paint the four crosswalks at the intersection of Third and State streets 11 colors that represent people of color, the trans-community and LGBTQ.

The idea for the crosswalk came after Carrasco saw one painted in Bozeman.

“I thought it was a beautiful idea,” she said. “I wanted to incorporate it into our town.”

After a group of students and adults offered to support the idea of an “inclusive sidewalk,” Carrasco and others have made presentations and listened to public debate about the issue before the Hamilton City Council’s Committee of the Whole on two occasions.

While the idea received support from some in the community, others spoke in opposition.

“The council meetings have been good and bad,” Carrasco said. “There’s been a lot of support, but there’s also been a lot of negativity. I didn’t expect to hear how terrible some of the comments were … It’s not what we wanted. Our project is about inclusion and love for all.”

“We’re not bringing this up for hate, just for love,” Rogers said. “It’s been pretty difficult.”

Carrasco said she appreciated the support the group has received from Chapter One Bookstore.

“Today’s painting of the windows at Chapter One during Pride Month shows that Chapter One supports all, loves all and it’s a safe space,” she said. “The bookstore is for everyone, no matter who you are.”

Hamilton mayor Dominic Farrenkopf said the town council will hear a draft “Paint the Pavement — Application and Guidelines” ordinance that would outline the process applicants would be required to complete before any crosswalk painting projects.

The draft calls for an application process that would require a $150 filing fee, a description of the proposed project and how it would be completed.

“The applications would be reviewed by the city council, with the requests being denied or approved objectively,” Farrenkopf said. “It would provide the city with some guidelines. It should be pretty interesting to see how the city council approaches the issue. I know there are a lot of people who are curious.”

The five-page draft policy said eligible applicants would include community organizations, nonprofit organizations, local businesses or business associations, special districts like schools or an individual sponsored by one of those groups.

The draft policy ends with a requirement that the applicant or sponsor organization provide $1 million of general liability insurance before the implementation of an approved project. The applicants and sponsors also must agree to hold the city harmless against any damage that may arise from a project or any lawsuits that may be filed.

The council debated the issue after press time for Wednesday's Ravalli Republic.

Play like Robert: Boy's classmates put in workday to remember their friend

On Monday, Robert Leonardi's fourth-grade classmates for Daly Elementary School remembered him by pulling on their work gloves and spending a part of the day picking hundreds of rocks along the trail that bears his name.

For a day Maci Rogers-Eldridge’s dream of stepping into her favorite Disney movie and becoming a princess came true thanks to Make-A-Wish.

On Monday, the Hamilton Zoning Board of Adjustments completed a marathon review of the conditional use permit the Roman Catholic Diocese of Helena needs to replace the 124-year-old church built by Marcus Daly with a larger modern building.

A 23-year-old Stevensville woman faces a felony criminal endangerment charge after she allegedly lost consciousness after huffing CO2 canisters and launched her car nearly 150 feet in the air through a grocery store parking lot.

Chapter One Bookstore co-owner Mara Luther offered a group of high school students pursuing the rainbow "Allyship Pride Crosswalk Project" a place to "give voice to their actions and the spirit behind them" by painting the store's windows with rainbows and messages about inclusiveness.

Haley Lords of Corvallis paints a rainbow on the window of Hamilton's Chapter One Bookstore. Lords was one of several Hamilton and Corvallis high school students who painted the windows in support of Pride Month. Some are part of a group who are asking the Hamilton City Council for permission to paint a rainbow "Allyship Pride Crosswalk."