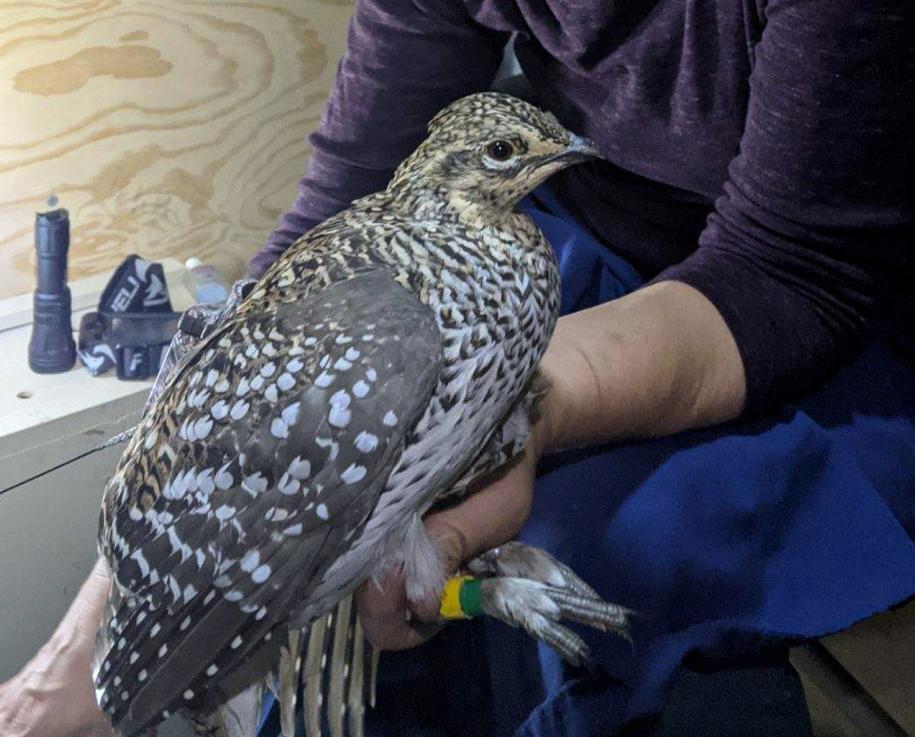 MPG Ranch's Kate Stone helps process one of the 75 male sharp-tailed grouse that were released at three sites in western Montana, including the MPG Ranch south of Missoula. "Everyone seemed to very much with the privilege of being able to be part of this," Stone said. "Reintroducing a species is something that doesn't happen every day." 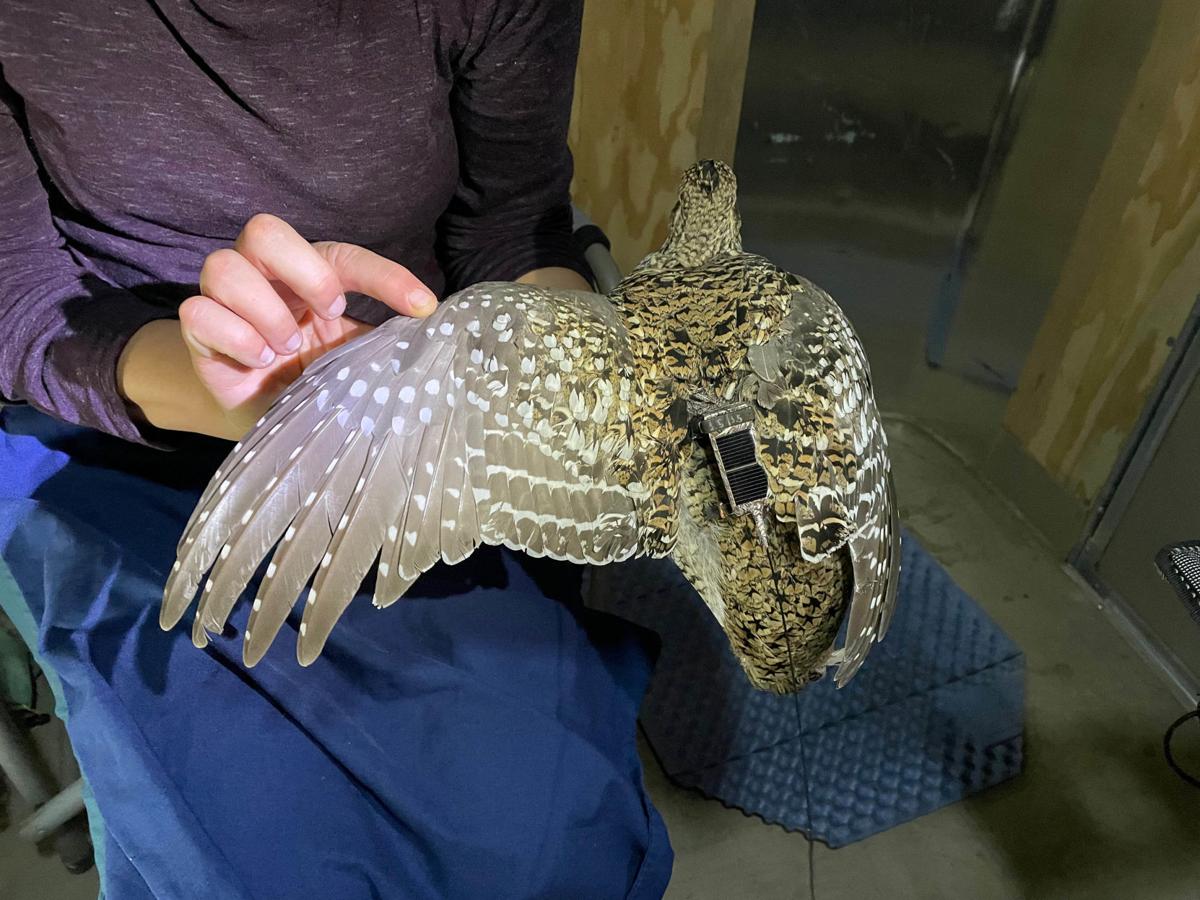 All of the 75 sharp-tailed grouse released in western Montana earlier this month were fitted with either a VHF or GPS transmitter so their locations could be tracked.

Sometime in the next few years, some lucky people might witness an annual ritual that disappeared decades ago in western Montana.

It will happen as the dawn breaks over grasslands south of Missoula or near Drummond or in the Blackfoot Valley.

Most likely, those watchers will be hunkered down in a blind as a gathering of sharp-tailed grouse settles down on a small patch of ground known as a lek. Almost on cue, the birds will snap into a dance posture as they bow, hold their wings outspread with their tails pointed straight up in the air. And then they’ll run forward stamping their feet into the ground up to 20 times per second as they court the hens looking on.

That dance hasn’t been seen in western Montana for more than 20 years after the native sharp-tailed grouse populations withered and died.

Last week, a dedicated group of biologists, ecologists and volunteers took the first step to rectify that by capturing 75 male sharp-tails from eastern Montana and releasing them in three carefully selected sites on this side of the state.

It was the culmination of decades of planning, study and hope.

The last documented sighting of a sharp-tailed grouse in western Montana was made by a noted ornithologist near Helmville 20 years ago. He saw one bird.

“They just kind of winked out in western Montana,” said Montana Fish, Wildlife and Parks biologist Chris Hammond. “We don’t know exactly why. Hopefully, this reintroduction effort will help us answer some of those questions.”

For the last 12 years, Hammond has been working on that idea, which traces its roots back to the 1970s with the completion of Libby Dam. Bonneville Power offered wildlife mitigation funding to the state for the habitat that was lost under the waters of the newly created lake.

At one time, that area held lots of sharp-tailed grouse.

After an initial effort to augment a population of sharp-tailed grouse failed near Eureka, biologists went looking for large blocks of undisturbed habitat that could potentially offer the birds a second chance to create self-sustaining populations in western Montana.

After all the modeling was done, they selected three places with large tracts of protected private lands.

The sprawling benches that border the Flint Creek Valley near Drummond. The Blackfoot Valley near Helmville, with its large expanses of private land protected by conservation easements. And the expansive MPG ranch just south of Missoula on the edge of the Sapphire Mountains.

“The Bitterroot will probably be the hardest,” said MPG Ranch ecologist Beau Larkin. “There’s more residential development here. Sharp-tails aren’t going to hang out near a house. They don’t like things that make it easier for hawks and eagles to spot them.”

“Grouse don’t live long, even under the best circumstances,” Larkin said. “There’s always something ready to eat them. To address predation, they produce large numbers of offspring every year.”

Before the birds could be captured and moved across the state, Hammond said biologists spent a couple of years collecting information at leks in eastern Montana to ensure that they didn’t capture too many birds from any site.

“We had all the leks named,” Hammond said. “We knew how to access them. We knew exactly how many birds we could take from each lek. It took an insane amount of logistics to make it all work.”

In order to move the birds safely, it had to happen fast and the grouse needed to stay cool during the trip.

“They love the cold,” Hammond said. “We didn’t want to overheat them.”

The grouse were captured at their leks in the early morning hours. Biologists and volunteers banded their legs and put on tiny backpacks that carried transmitters that would help researchers locate them later. After that, they were placed in cardboard boxes that were packed near coolers filled with ice.

On that same day that they were captured, the birds were moved to their new homes across the state where everything was checked one more time before they were carefully released one by one.

“After working on this for 10 years, it was sort of unbelievable to watch them come out of the box and start wandering around,” Larkin said. “None of them flew off. After all that it took to get them here, it was very encouraging to see them acting so calm.”

There were 25 male birds released at each location. The plan calls for capturing 180 females next spring to release 60 at each site. The plan is to follow that same trapping schedule five times in 10 years.

While a couple of the grouse at each site were fitted with a GPS tag that tracks their movements regularly, the rest wore VHF transmitters that can either be located manually or through a series of MOTUS towers that track a wide variety of avian species.

After a week, Larkin has located about eight sharp-tails on the MPG Ranch. Some were as close as a half-mile away from the release site. The farthest was a mile and a half away.

“It’s very encouraging,” Larkin said. “If they had just all taken off and flown for miles and miles, we would have had a hard time knowing where to bring the females. The fact that they are sticking around makes me feel like the MPG must be a good enough place for them.”

“They are also probably tired and confused,” he said. “In some ways, it must be like an alien abduction. They wake up one day and they are in a totally new place and they have no idea what’s there.”

Sharp-tailed grouse are the only bird species documented by Lewis and Clark that had disappeared from western Montana.

“The big difference between now and 20 years ago when they were last seen around Helmville is no one was paying attention to them back then,” Larkin said. “The partners who have come together to make this happen are already touching a lot of people. Just like any other conservation project, the success of this one will depend on just how much people care.”

The people who have been involved in this conservation effort have waited a long time for this to happen.

“It’s been years and years of working together,” Hammond said. “There were times that we were sure that we were down and out and didn’t know if we would get there.”

“The reintroduction of a wildlife species is something that very few people have been fortunate to be part of,” he said. “Monday (two weeks ago) was the first time that I observed a lek. I got to watch the dancing birds tapping their feet, spreading their wings and going after each other. It was a moment in my life that will go down as one of my top five.”

Work started this week on the first steps toward building the new John Owen Fishing Access Site near the Stevensville Bridge.

In an effort to keep chronic wasting disease out of the Bitterroot Valley, Montana Fish, Wildlife and Parks and Bitterroot Disposal will open a game carcass disposal collection site Friday.

“We know that grizzlies are coming,” People and Carnivores' Brittani Rosas said. “We don’t want anyone to be caught off guard. We have a prime opportunity here in the Bitterroot to get ahead of it before it really begins.”

A 30-year-old Hamilton woman was charged Wednesday with crashing into a home’s living room in the middle of the night and narrowly missing its owner last May.

Faced with a shortage of teachers, substitutes and bus drivers due to illness, the Darby School District opted to take advantage of a short week to move to remote learning through Wednesday.

After a record-breaking year at the Darby Rodeo Arena, Cal Ruark was looking for something new to offer rodeo fans this upcoming summer. He found that in a challenge between a hometown bull and bull rider at this year's Twisted Nut Festival bull riding event.

MPG Ranch's Kate Stone helps process one of the 75 male sharp-tailed grouse that were released at three sites in western Montana, including the MPG Ranch south of Missoula. "Everyone seemed to very much with the privilege of being able to be part of this," Stone said. "Reintroducing a species is something that doesn't happen every day."

All of the 75 sharp-tailed grouse released in western Montana earlier this month were fitted with either a VHF or GPS transmitter so their locations could be tracked.