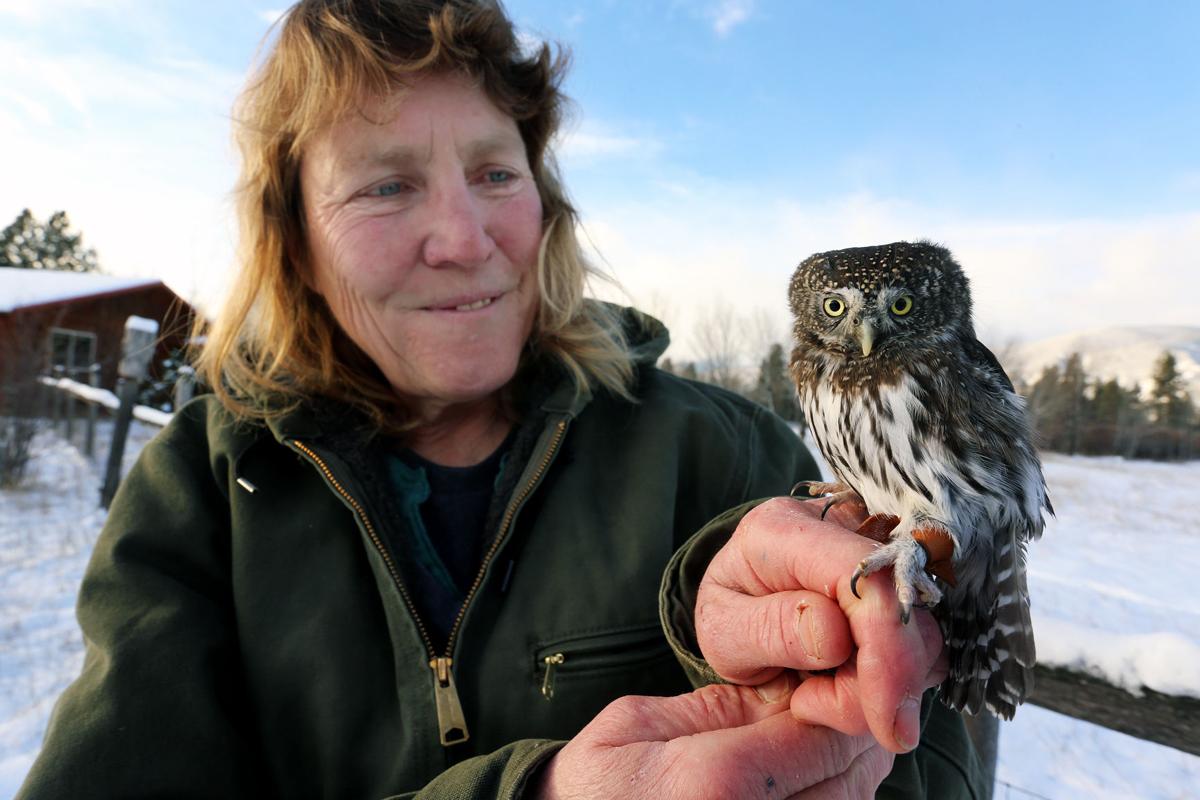 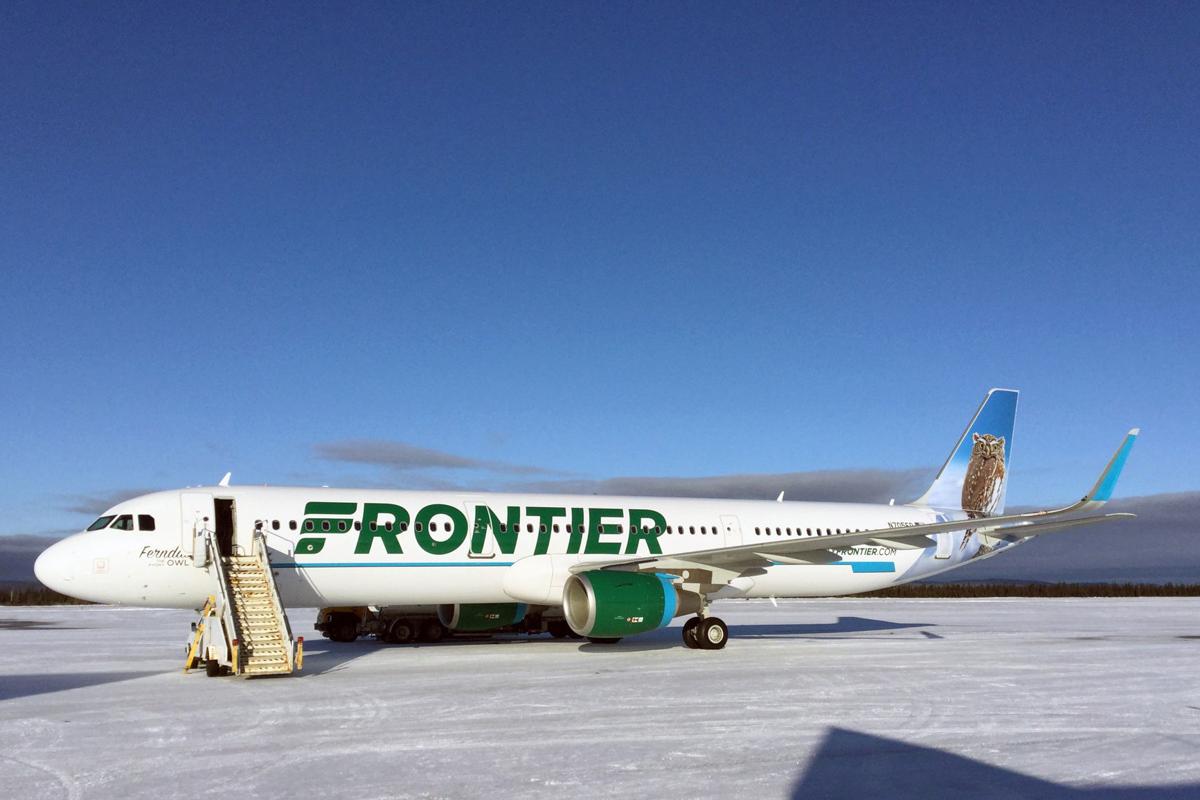 Frontier Airlines newest Airbus airplane features a painting of a Northern pygmy-owl inspired by Kate Davis' Raptors of the Rockies' own iPod. 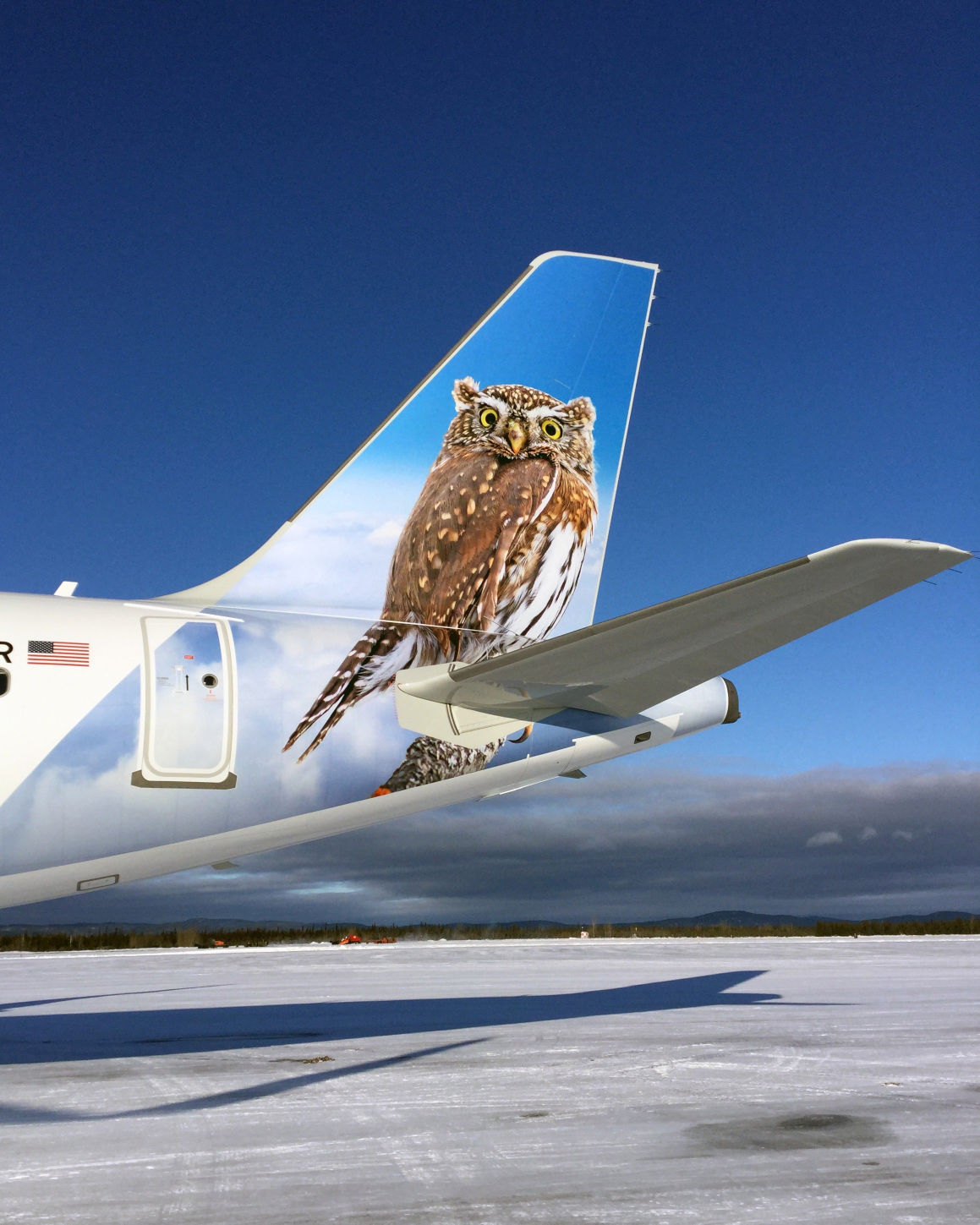 FLORENCE – For as long as she can remember, Kate Davis has loved anything that could fly.

For 29 years, the founder and director of the Florence-based Raptors of the Rockies has shared that love of wings with thousands of people across the country during educational programs that feature a variety of live birds of prey.

She never could have guessed that one of her birds would be taking flight, fueled by the power of jet engines.

Denver-based Frontier Airlines added a new Airbus A321 this week that features a northern pygmy owl the airlines has named “Ferndale” on its tail.

The painting was inspired by Davis’ very own owl that she calls “iPod.”

It’s just the first of many airplanes that will be spreading the image of the tiny owl across the country.

Davis received a photograph of the airplane this week.

“Being an aviation enthusiast myself, this is the greatest tribute to our tiny predator iPod – to be honored in a 20-foot-tall painting on an aircraft tail,” Davis said.

The idea of using the image of a tiny pigmy owl that stands maybe five inches tall began three years ago with one of Davis’ educational programs to a group of 35 international airline executives from nine different countries.

She had been invited to give the pre-lunch program at the lakeside home of Bill Franke in Ferndale in August 2012.

Davis brought three of her teaching-team birds to the presentation. But it was iPod who stole the show.

“I always say that pound for pound, or gram for gram, the pygmy-owl is the fiercest predator out there,” Davis said. “They are fearless and capable of killing prey over twice its size.”

When Davis shows iPod to groups of elementary students, they almost always respond with childish glee and comments like “oh, they’re so cute and cuddly.”

Davis reminds the youngsters that owls are not vegetarians.

“I tell them if they were this big,” she said, holding her about three-feet off the ground, “they might eat second graders. I remind them that if a pygmy owl was bigger, they would all have to run and hide.”

When Davis shared that story with the airline executives, they all laughed.

Franke called Davis with the news that her owl had inspired a new design on some of his aircraft in August, exactly three years after she gave her presentation at his home. Beyond the tails of the big airplanes, Franke told her the iPod-inspired painting would eventually appear on 100 additional smaller aircraft the company was purchasing.

“It’s so sad, but the birds are so old,” she said. “They wouldn’t live that long in the wilds.”

The photograph of the image of the pygmy owl looking fierce on tail of Frontier Airlines’ newest Airbus A321 showed up in Davis’ email box last week. It made her day.

“I was surprised and excited to see that,” Davis said.

Ferndale joins 60 other animal tails featured on the airline’s fleet.

Davis is often reminded about the impact her birds have on people.

Earlier this week, she went skiing at Snowbowl.

“I had three adult men come up to me and ask ‘Do you still have that eagle?’” she said. “People seem to remember them forever.”

And they don’t forget what they learned.

When she put out the news about the iPod-inspired painting on her blog, one of her readers wrote back hoping the other side of the aircraft’s tail would feature the back side of the tiny owl with its feathers that form in the shape of eyes.

“It makes them look like they have eyes in the back of their heads,” Davis said. “These birds do make an impression when people see them.”

To learn more about Raptors of the Rockies, go to http://www.raptorsoftherockies.org.

Reporter Perry Backus can be reached at pbackus@ravallirepublic.com.

CORVALLIS —Alfred Magnia Chavez Jr., of Corvallis, passed away peacefully in his home, surrounded by family on April 11, 2021, at the age of 8…

Last week, a Forest Service officer cited a man for dumping 10 bags of yard debris in the Skalkaho Creek area; when asked why he dumped his trash on national forest lands, the man allegedly said he thought someone would burn it for him.

A Florence woman was charged with three felonies after allegedly driving her children to school while under the influence of alcohol.

A Hamilton man charged with possessing methamphetamine with intent to distribute wore a shirt with the words “Meth. We’re on it” at the time of his arrest, according to charging documents.

Hidden history: Archaeologists turn to technology to look for clues at Fort Owen

Fort Owen is one of few sites in Montana on the National Register of Historic Places that has been designated as having national significance.

Twelve years of hard work paid off for Hamilton High School Senior Logan VanDenburg as he was chosen one of only two graduates in Montana to receive a U.S. Navy Reserve Officer Training Corps (ROTC) Scholarship that will pay full tuition for his four years in college.

Frontier Airlines newest Airbus airplane features a painting of a Northern pygmy-owl inspired by Kate Davis' Raptors of the Rockies' own iPod.