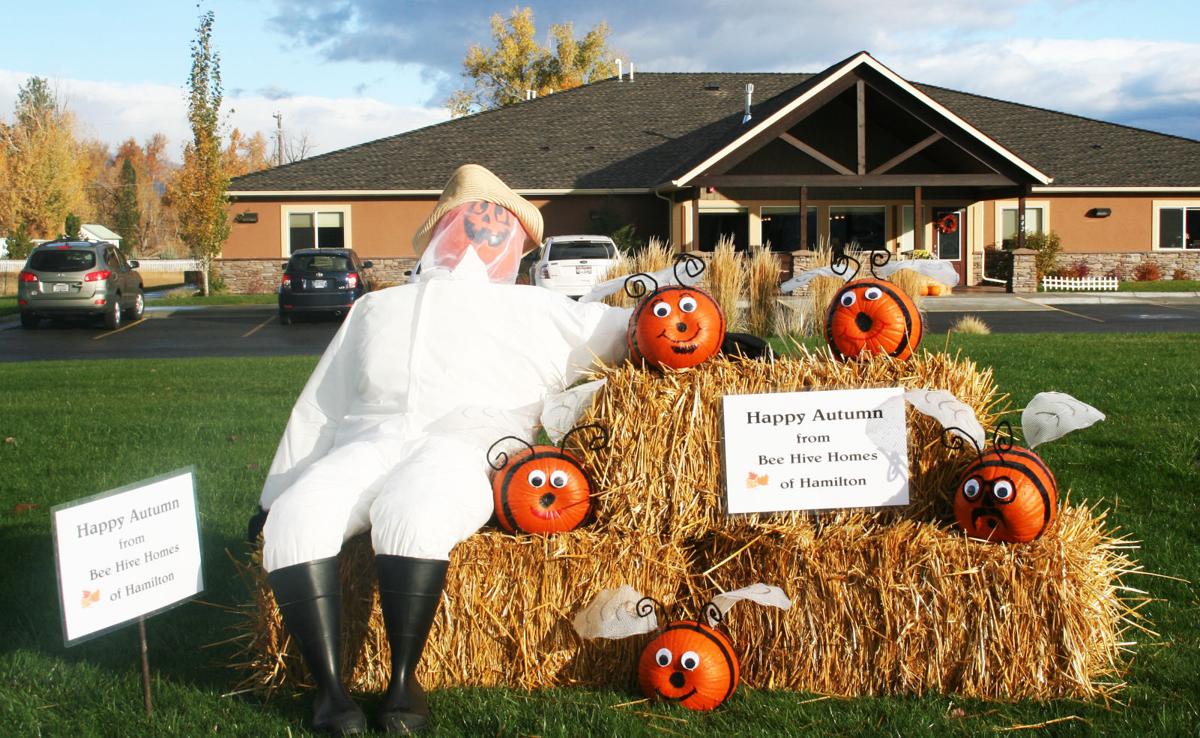 “Happy Autumn from Bee Hive Homes of Hamilton” says the sign on the large straw-bale bee hive with pumpkin bees and scarecrow beekeeper for Scarecrow Loop. 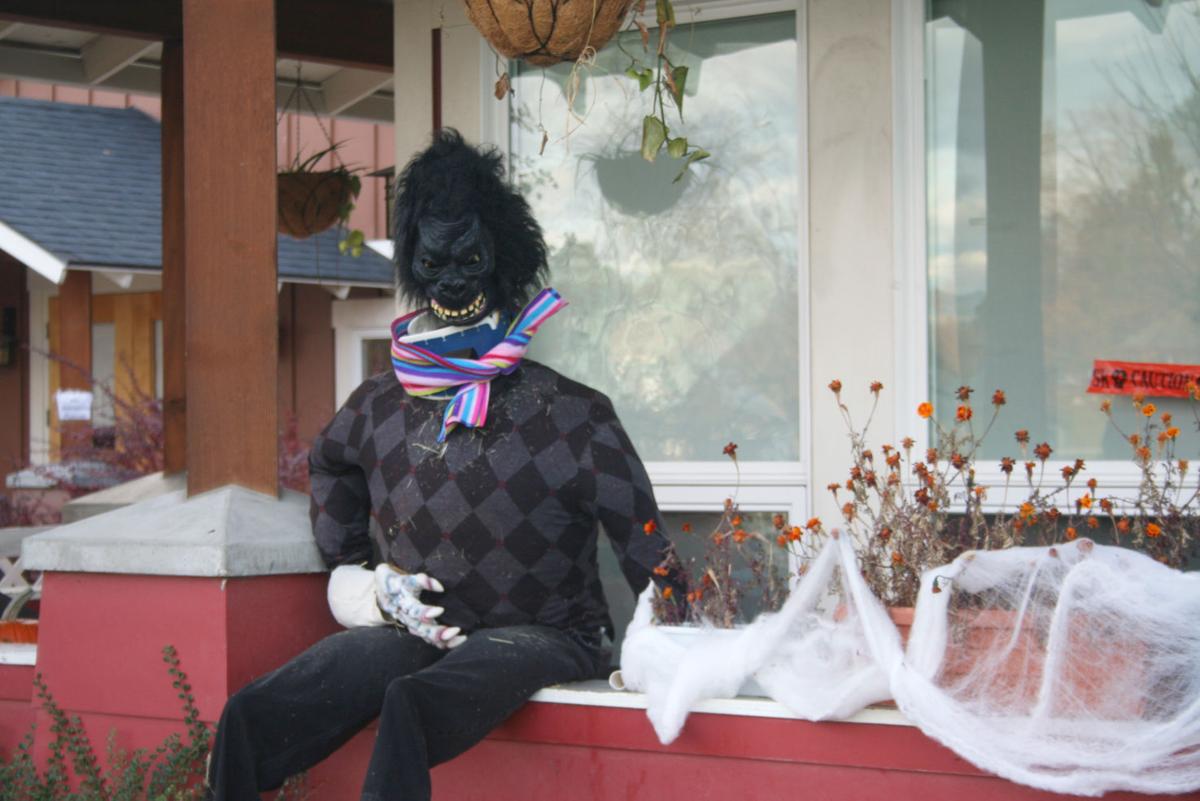 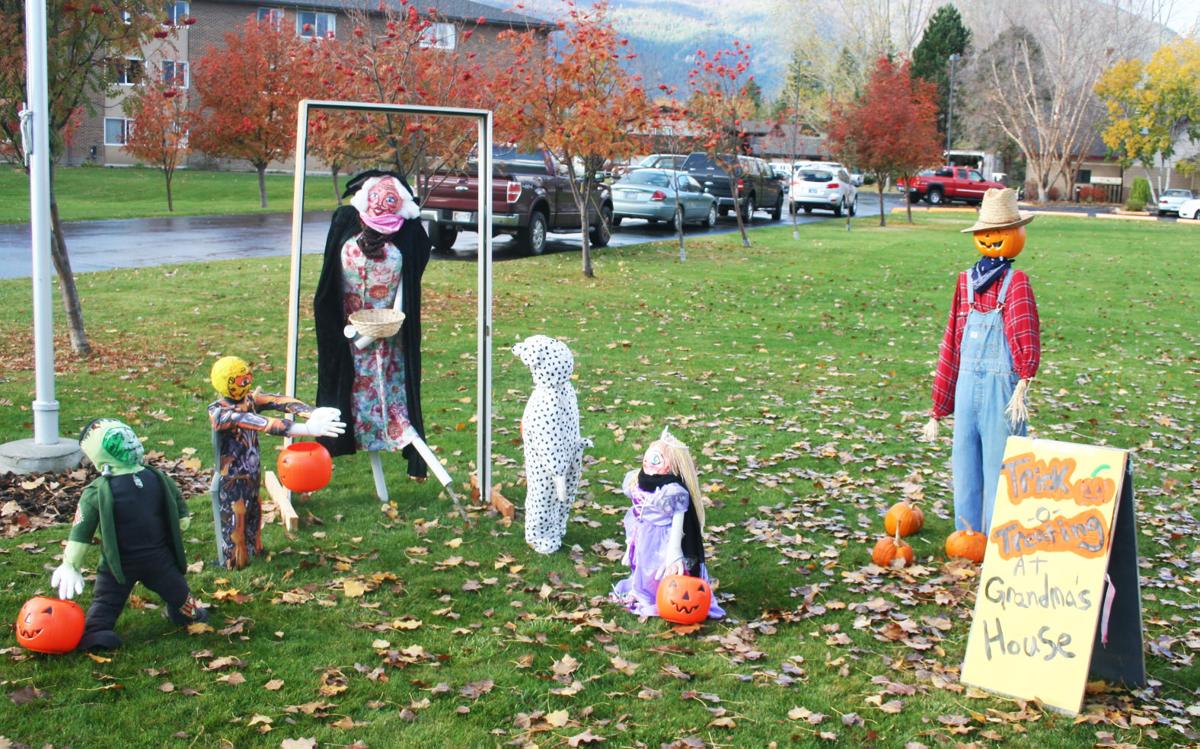 “Trick or Treating at Grandma’s House” was the scarecrow creation at Sapphire Lutheran Homes for the Scarecrow Loop. 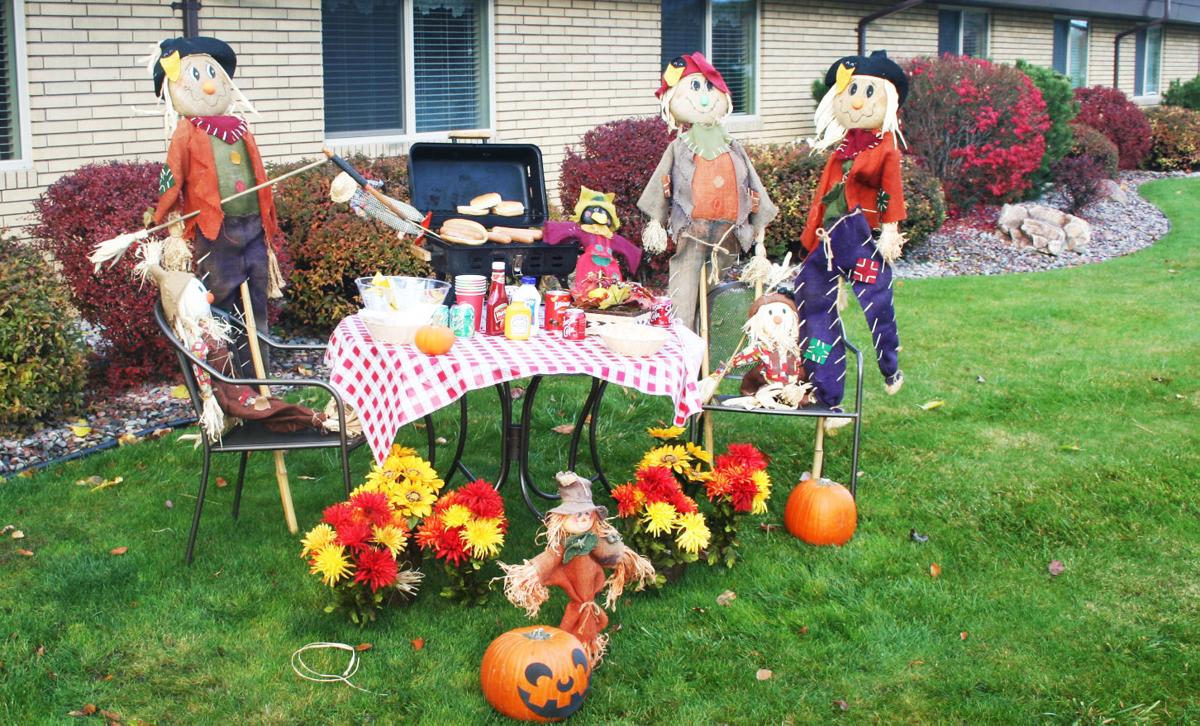 At Valley View Estates a scarecrow family was enjoying a frosty fall barbeque on Scarecrow Loop.

By DOMINIC FARRENKOPF - for the Ravalli Republic

Wednesday morning’s air was fresh and crisp, the sky was clear and blue, and no matter where you looked, a crow could not be found - at least not on Scarecrow Loop.

Three retirement communities and one adult day treatment community in Hamilton built and displayed scarecrows this month. On Wednesday, the groups met at Valley View Estates to caravan around “Scarecrow Loop,” a small section of Hamilton streets connecting the four communities.

Lois Smith, activity director of Valley View Estates, proudly displayed their scarecrow. Three “traditional” scarecrows gathered around a picnic table and barbecue. There were hot dogs on the grill and buns on the warming rack. A bowl of potato chips, cans of soda and condiments were laid out on the table. The scarecrows were all smiles as they waited patiently for their lunch.

A harvest it was indeed.

The residents and clients were posed this question, “Will the scarecrows live up to their name and ward off our feathered friends, or will the birds enjoy the fall hot dog harvest?”

The residents of Valley View Estates were confident that their scarecrows would ward off all unwanted pests. Others weren’t too sure about that.

On the Beehive Homes bus, most of the residents’ hands went up to vote that the birds would get a free lunch. The residents laughed as they voted in favor of the birds. Mildred Houser, resident of Beehive Homes, remarked with a chuckle that the scarecrow display was “wonderful.”

The caravan left Valley View Estates and headed north on Eighth Street. When they reached New York Avenue, they turned left and parked in front of Beehive Homes.

Beehive’s scarecrow display was a friendly beekeeper seated on some straw bales. He was surrounded by pumpkin honey bees. The pumpkin bees had smiles drawn on them by the residents. They had pipe cleaner antennas and plastic craft mesh wings. The bees all seemed friendly with the exception of one. The bee in question had a moustache that gave him the appearance of a frown. He was also wearing glasses.

“That one looks mad,” remarked a resident on the Valley View bus.

Musante too thought the bee was upset. “I’m allergic to bees and that’s usually how they look when they see me.”

Chris Hemming, a client of New Beginnings, made this observation: “That bee is not mad, it’s Theodore Roosevelt! I’m sorry Theodore, wherever you are.”

Lisa Criddle, owner of Beehive Homes, talked about the pumpkin bees. “The residents made the bees, except the one on the far right - Cameron, made him.”

She was referring to her husband, Cameron Criddle. Cameron laughed as he defended his bee that had come under so much scrutiny, “He’s not frowning. That’s facial hair!”

Marlin Walther, a resident of Beehive Homes spoke up. “We had a great time building this,” she said.

The caravan turned right on North 10th Street and headed south. The caravan stopped at Sapphire Lutheran Homes. Their scarecrow depicted four children trick-or-treating at grandma’s house. Grandma stood in the doorway with her candy bowl. The children formed a little group outside ready with their pumpkin buckets. They were dressed as a Frankenstein, a Dalmatian, a princess and a robot. Grandma had a pumpkin patch outside her door guarded by a “traditional” scarecrow. He wore his straw hat on a kilter.

Criddle pointed him out to her residents. “He looks like Cary Grant!”

The procession halted for a few minutes while hot cider was served out of the back of the Sapphire Lutheran Homes van by staff from each community.

Criddle also took this opportunity to pass out candy. He bounded between the vehicles passing out licorice and laughter. “Have a handful!”

Phyllis Earnst, a resident of Valley View Estates, chimed in. “This cider is really good and those little scarecrows are cute.”

The parade continued south on North 10th Street and parked in front of New Beginnings Adult Day Treatment. Their scarecrow was an extra-large gorilla, who sat guarding the porch with a menacing grin. His teeth were sharp, as were his flinty eyes.

Musante joked about their scarecrow perhaps being in need of some counseling.

Levi Syverston, a client of New Beginnings, beamed, “This was an ape of an adventure!”

Scarecrow Loop was dreamed up by Dominic Farrenkopf, activity director of Sapphire Lutheran Homes. Together with the Criddles, Musante and Smith, Farrenkopf coordinated the event. He said, “We all talked on the phone, came up with a date and time and then each community made a display. There was no theme or competition, just a chance for fun and fellowship between neighbors.”

“This was wonderful and fun,” said Lois Smith of Valley View Estates.

Lisa Criddle also commented, “Yes, this was a fun way to celebrate fall.”

Jim Musante also agreed that the event was fun and good for his clients. “They just gathered around and made this huge gorilla!”

Scarecrow Loop is a pleasant drive of about 10 city blocks ... as the crow flies!

Sprinkle Pink is the valley-wide effort to raise awareness of breast cancer and gather donations for the Aid to Mammography Fund. The monthlon…

“Happy Autumn from Bee Hive Homes of Hamilton” says the sign on the large straw-bale bee hive with pumpkin bees and scarecrow beekeeper for Scarecrow Loop.

“Trick or Treating at Grandma’s House” was the scarecrow creation at Sapphire Lutheran Homes for the Scarecrow Loop.

At Valley View Estates a scarecrow family was enjoying a frosty fall barbeque on Scarecrow Loop.