The Friends of Bitterroot said their lawsuit seeks to save “crucial, roadless, elk habitat surrounded by an area still recovering from decades of over-harvest.”

The group contends the project not only violates federal law, but it also represents a broken promise by the agency to restore the area.

"The Forest Service has missed a great opportunity to do true restoration on the most ecologically damaged lands on the Bitterroot National Forest,” said Jim Miller, president of Friends of the Bitterroot (FOB). “The Darby Lumber Lands have not recovered from decades of industrial-scale logging and road building, yet the agency plans to log the last vestiges of intact forest ecosystem in crucial elk habitat and to illegally build roads to get the big trees."

“The Forest Service worked with numerous stakeholders to develop a project that would put the area on the path of recovery, a process that began all the way back with the Phase 1 of this project,” said Miller. “Now under Phase 2, the Bitterroot National Forest has decided to include harmful logging and road building instead of keeping the promise to truly restore the area.” 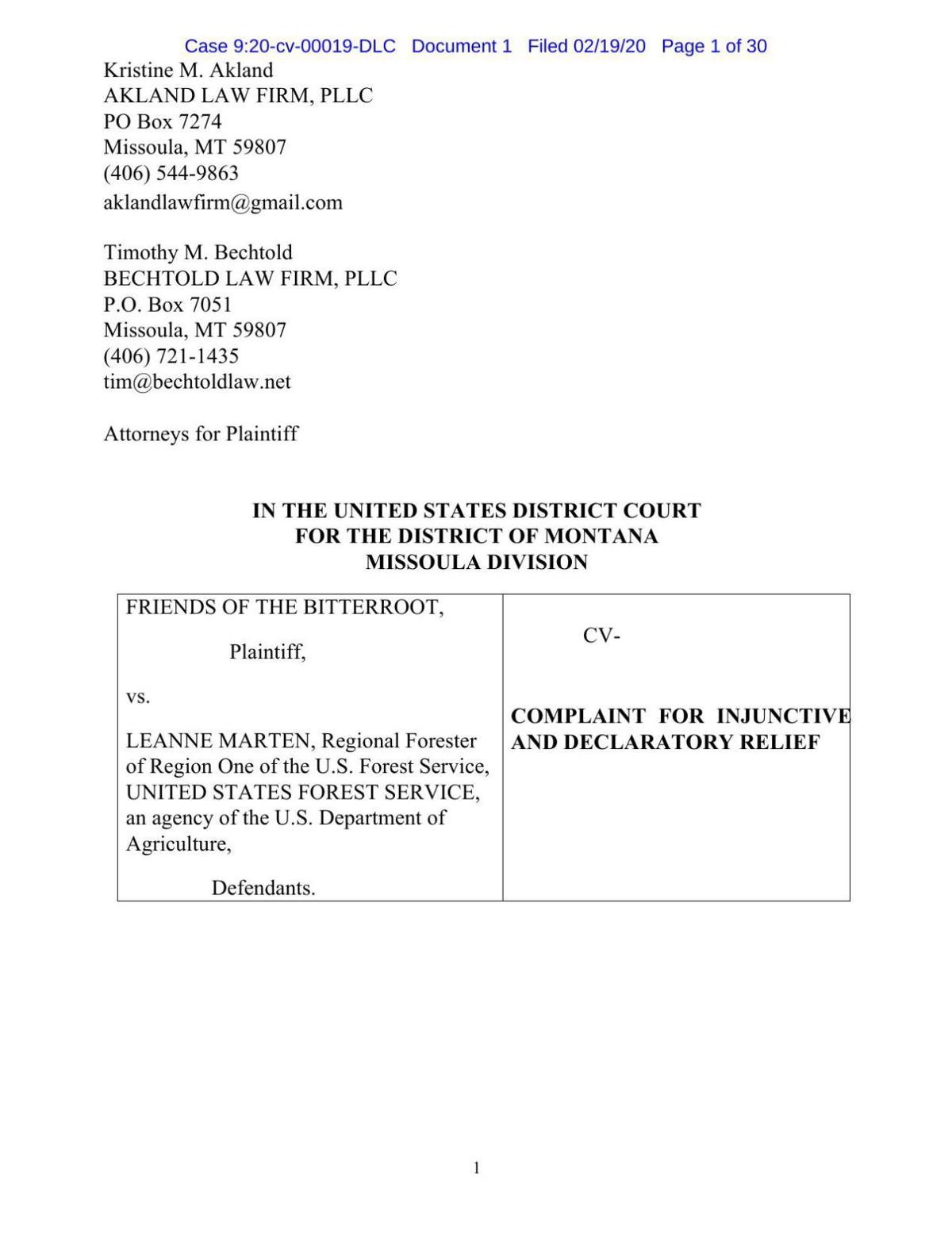 The group wants the courts to set aside a decision for the project and enjoin it from moving forward. They are also asking for costs under the Equal Access to Justice Act.

Bitterroot National Forest Supervisor Matt Anderson said the project was important for the resource and the community.

“We have not had a chance to read the lawsuit thoroughly as we just received it,” Anderson said. “It is unfortunate that the project, which drew community support, has been litigated. This is an important project that improves forest health, reduces potential fire severity, and is good for our local economy and jobs. We believe we did our due diligence under the law.”

Dan Thompson of the Ravalli County Off-Road User Association worked closely with the agency on the first phase of the project in developing an ATV trail system using old logging roads. He said the agency did not follow all the club’s recommendations for adding roads as part of the second phase.

“They added about 1.7 miles of new construction, which were mostly small connector roads,” Thompson said. “There were some nice opportunities that weren’t added. We certainly were not as pleased with Phase II as we were with the first phase.”

Despite that, Thompson said the club supported the project.

“We advocate for active management of the forest,” he said. “We know what’s going to happen if we don’t do something. It’s going to burn and it’s going to burn hard … It seemed to us to be a pretty well thought out project, even if some of the more exciting roads were not accepted.”

The Friends of the Bitterroot lawsuit said the project did not meet standards under the Bitterroot National Forest’s 1987 forest plan. It would also build roads into an area that was set aside in the 1987 plan for forage production for big game.

It claims the current road density exceeds standards established in the 32-year-old plan for “elk habitat effectiveness,” which requires no more than two miles of open road per square mile during the season when elk use the area.

“The BNF Forest Plan is a foundational management contract with public landowners,” said FOB member Larry Campbell. “It lays out legal limits to ecological harm. We are asking a judge to decide if the BNF can waive legal protections of elk habitat, yet again. We are drawing a line at the Darby Lumber Land project area because it is an island of prime elk habitat surrounded by a sea of habitat destruction.”

The lands in question were originally owned by the Burlington Northern Railroad. Over time, they were sold from Plum Creek to Darby Lumber and finally the CB Ranch. A long-term effort to consolidate the checkerboard ownership of public and private lands was completed in 2013.

Heavily logged in years past, the 45-square-mile project area contains several hundred miles of road that were once used by logging operations.

The notice authorizing the project was signed in August.

The project included a timber sale called Tabor Mountain that was sold to Pyramid Mountain Lumber of Seeley Lake.

Pyramid Lumber’s Gordy Sanders said the company had planned to begin reconditioning existing roads in preparation for hauling out logs on them. Sanders said they focus on upgrades that would impact water quality, sediment control and safety.

The decision hasn’t been made when the logging would take place, but it could be later this year.

The lawsuit will add uncertainty, Sanders said. In the Swan valley, work was put on hold on one project for five years as it worked its way through the courts, he said.

The Bitterroot Community Wildfire Protection Plan identified the area set to be logged as “high priority” for fuels reduction within the Wildland Urban Interface, according to a Bitterroot Forest press release.

“It is in definite need in terms of forest health and stand resilience,” Sanders said. “Should it get delayed, it ensures that none of that work will get implemented in a timely manner.”

“Considering all the discussions that have occurred over the last 12 or 13 years, to have a lawsuit filed in the 11th hour is disappointing,” Sanders said. “It’s a good example of how the courts are being used to not manage our forests.”

Tickets are on sale for the 6th annual International Fly Fishing Film Festival that brings both short and feature-length films produced by professional filmmakers from all corners of globe to Hamilton. The annual event is hosted by Eddie Olwell’s Fishs Eddy O Outfitters. All proceeds go to the Bitter Root Water Forum.

Man charged with strangling his mother

A former Corvallis man was arrested after he allegedly strangled his mother and bit an officer’s arm.