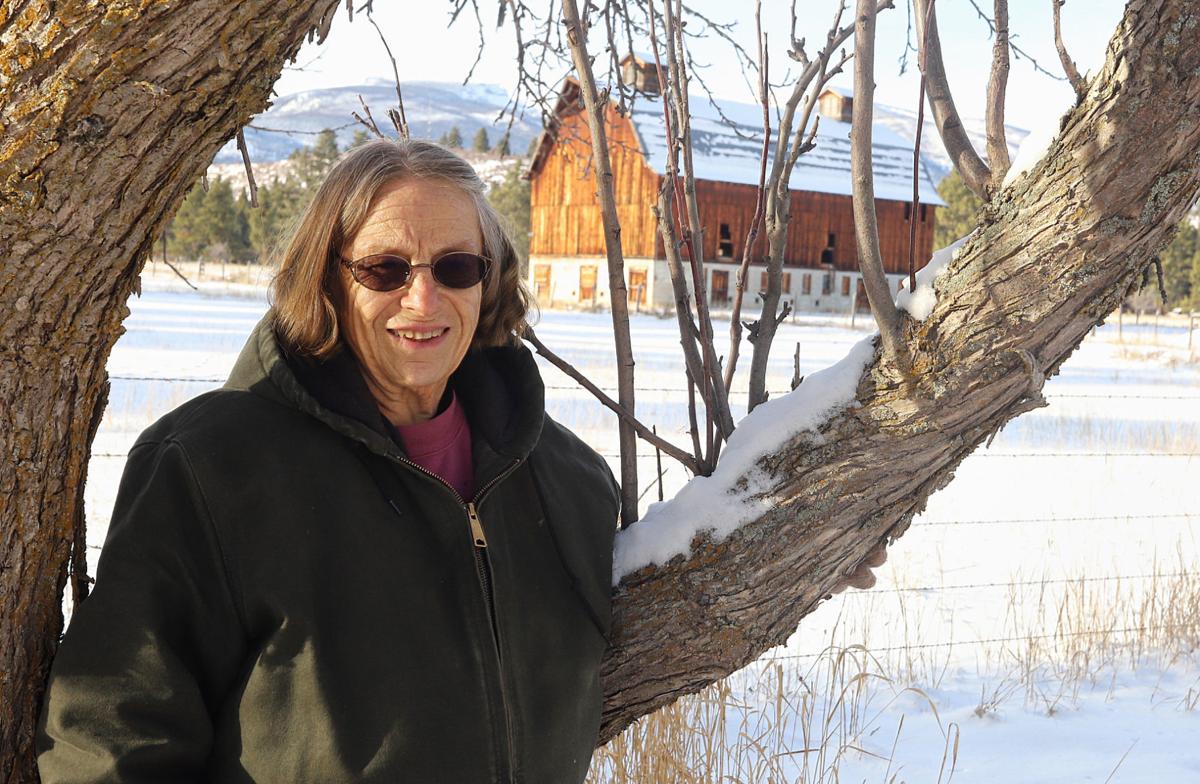 Anna Mae Paddock stands before the barn on her property. 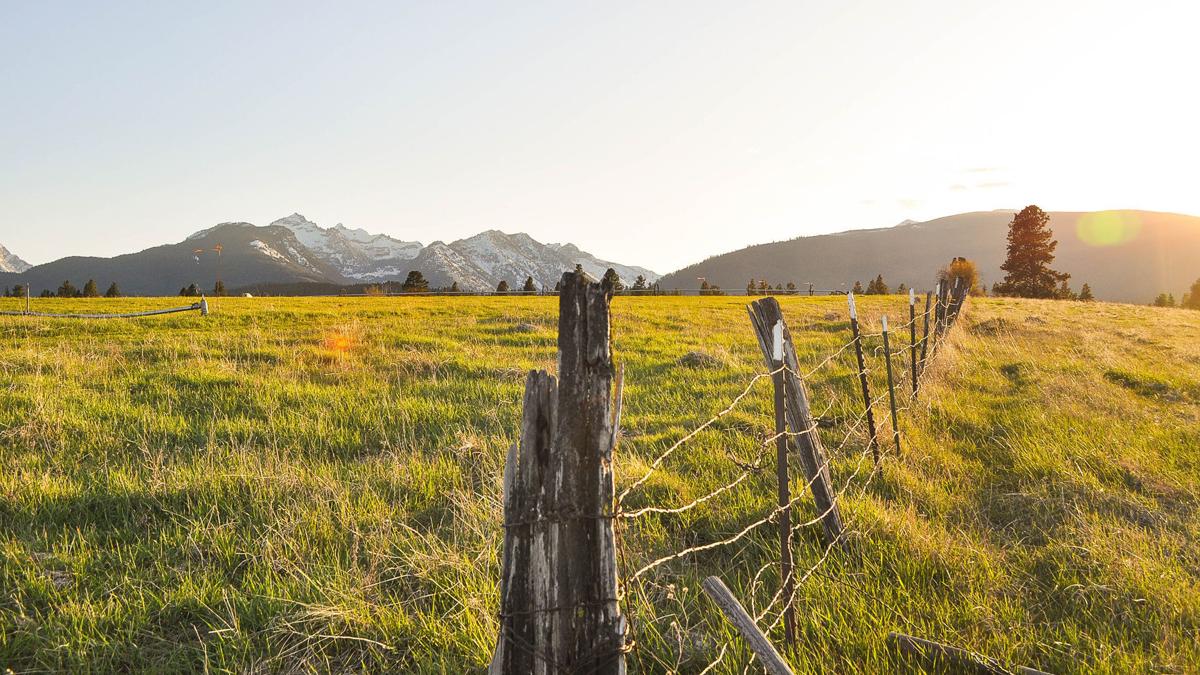 Close to 220 acres of the Paddock Ranch located north of Darby near the intersection of the Old Darby and Lake Como roads was preserved through a conservation easement through Ravalli County's Open Lands Program.

Anna Mae Paddock smiles as she sat at her kitchen table and thought about all the wildlife she saw last summer while irrigating her family ranch just below Lake Como.

“There is a meadowlark out there that kind of scolds me when I go up the hill. They seem to like it best more or less away from the people.

“And once in a while, there’s a blue jay. You don’t see them much. They like the pine trees.

“But the one I’m most interested in is that kestrel. I just thought it was a small hawk. He’s kind of a pretty little thing. He mainly stays here in the head of this draw and really doesn’t go off that way. And, of course, there’s the owl and the redtail.

“And the turkeys. I don’t know where they go. They seem to be quite the travelers. Sometimes they come through here and then they disappear. One time this summer, there was a hen with her four little ones when the grasshoppers were bad. They were just picking them off.”

She’s happy this day to know that it will always be that way.

Paddock, who grew up in a small ranching family in the Bitterroot Valley, knows all about the challenges that come with keeping the land in agriculture.

Her ancestors arrived in the Bitterroot Valley in a covered wagon in 1900.

Sometime back in the late 1930s, her great-uncle, Fred Shawver, bought the Elderkin place that many nowadays recognize for its beautiful old barn just off the Old Darby Road below Como Peaks.

It was the place that she would come to call home.

“Just the first five years of my life were spent in Stevensville,” Paddock said on a recent afternoon. “All of the rest, I’ve been here.”

She’s no stranger to hard work. Her family ran a dairy for a time, where they made good use of the barn that was built in about 1915 for George Elderkin — a Midwestern man who had purchased the original homestead in 1910. Work on the barn came to standstill during World War I when most of the workers went off to war.

The barn never did get completely finished. A whole section of the ceiling has cross bracing that was never nailed into place. And Elderkin never used it. His family eventually lost the place for back taxes.

Paddock understands how that could happen.

Starting in the 1970s, her family began to sell off pieces of their ranch to pay off bank loans. Two sections of rangeland east of the Bitterroot were the first to go. Other parcels were sold in the 1980s and 1990s, but the family found a way to keep 244 acres of bench-top grasslands, forested hillsides of park-like Ponderosa forest that was their home place.

The heart of the family’s ranching operations had raised both dairy and beef cows, as well as a small band of sheep that Paddock started back when she was a member of 4-H. Today a neighbor leases it to graze his cattle.

The idea that someday the property could end up as another subdivision was something that Paddock could hardly bear.

On Jan. 3, that worry ended forever when the property went under a conservation easement as Ravalli County’s first Open Lands project of the year. The easement ensures the property will never be developed.

It wasn’t a decision that Paddock made lightly.

Bitter Root Land Trust’s founder Steve Powell first brought up the idea years ago. After Paddock sold the last parcel and got the bank paid off, she began to think seriously about that option. She spent a few years peppering Bitter Root Land Trust’s Kyle Barber with questions before finally deciding that she wanted to make that move.

“We spent a good two or three years getting to know each other,” Barber said. “One of the cool pieces of this property is the wildlife that moves through this place. This is pretty much the narrowest stretch of the valley here.”

Her place sits right in the middle of three other properties that have already been protected by conservation easements.

“It’s like a funnel that comes down for wildlife,” Barber said.

One of the main focuses of the Ravalli County Open Land Program is to preserve working agricultural lands and protect wildlife habitat.

“It’s exciting for us to be able to work with longtime landowners like Anna Mae who have spent so much time being good stewards to their land,” Ricklefs said. “The bond is here to provide landowners with an option to ensure that their lands remain intact to preserve that legacy of some of the most important places in the valley for agriculture, wildlife, and open space.

“We are just so appreciative of landowners like Anna Mae and the community for stepping up to create the open lands program that allows us to ensure that this valley that we all love so much will be passed down for the next generation to enjoy,” he said.

When asked what her parents would have thought of preserving the home place, Paddock wasn’t sure quite how to answer. Both her mother and father had worked so hard all their lives, she didn’t think they could quite imagine it.

But she did know for sure that her father loved that place. He was from eastern Montana and was a man of few words.

One day, “just out of the blue sky,” he told his daughter that he wanted his ashes scattered up there on the hill. And he told her to plant a tree in that spot.

“My father’s ashes are up there now,” she said.

The Bitter Root Humane Association is working to find good homes for huskies that were rescued in December.

Meggie Morgan of Stevensville was sentenced Friday to a 20-year commitment with the Montana Department of Corrections with 15 years suspended.

The Montana Highway Patrol is asking for the public’s help in finding a driver responsible for a serious hit-and-run crash with a pedestrian Saturday night.

“Sometimes art is just for the fun,” said Lee Kierig Thursday afternoon as he watched the newest sculpture come together at the budding art park just north of Hamilton. “If art can create some kind of emotional response from people, then it’s doing its job.”

Grizzly bears that find their own way into the Selway-Bitterroot ecosystem are protected under the federal Endangered Species Act. The U.S. Fish and Wildlife Service confirmed that in a letter Tuesday to four national forests.

What comes next in NY's investigation of Trump

Anna Mae Paddock stands before the barn on her property.

Close to 220 acres of the Paddock Ranch located north of Darby near the intersection of the Old Darby and Lake Como roads was preserved through a conservation easement through Ravalli County's Open Lands Program.