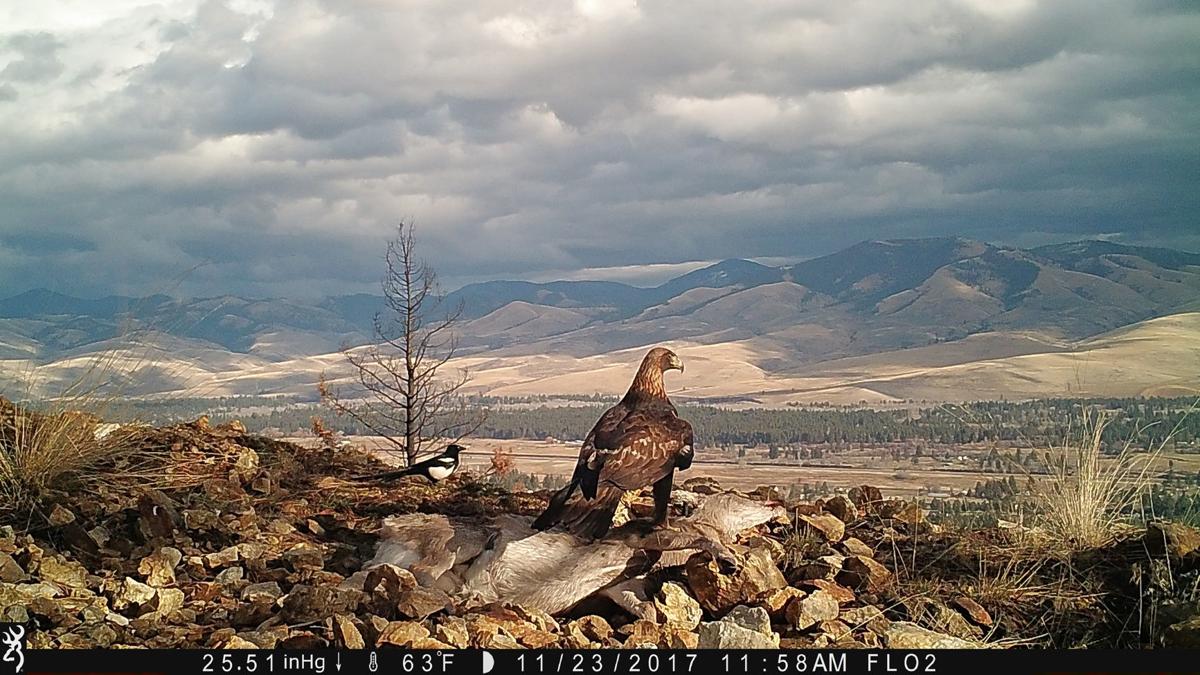 Researchers wth the MPG Ranch hope that hunters will help them branch into a new study on scavengers this winter by agreeing to set up game cameras on the gut piles they leave behind. 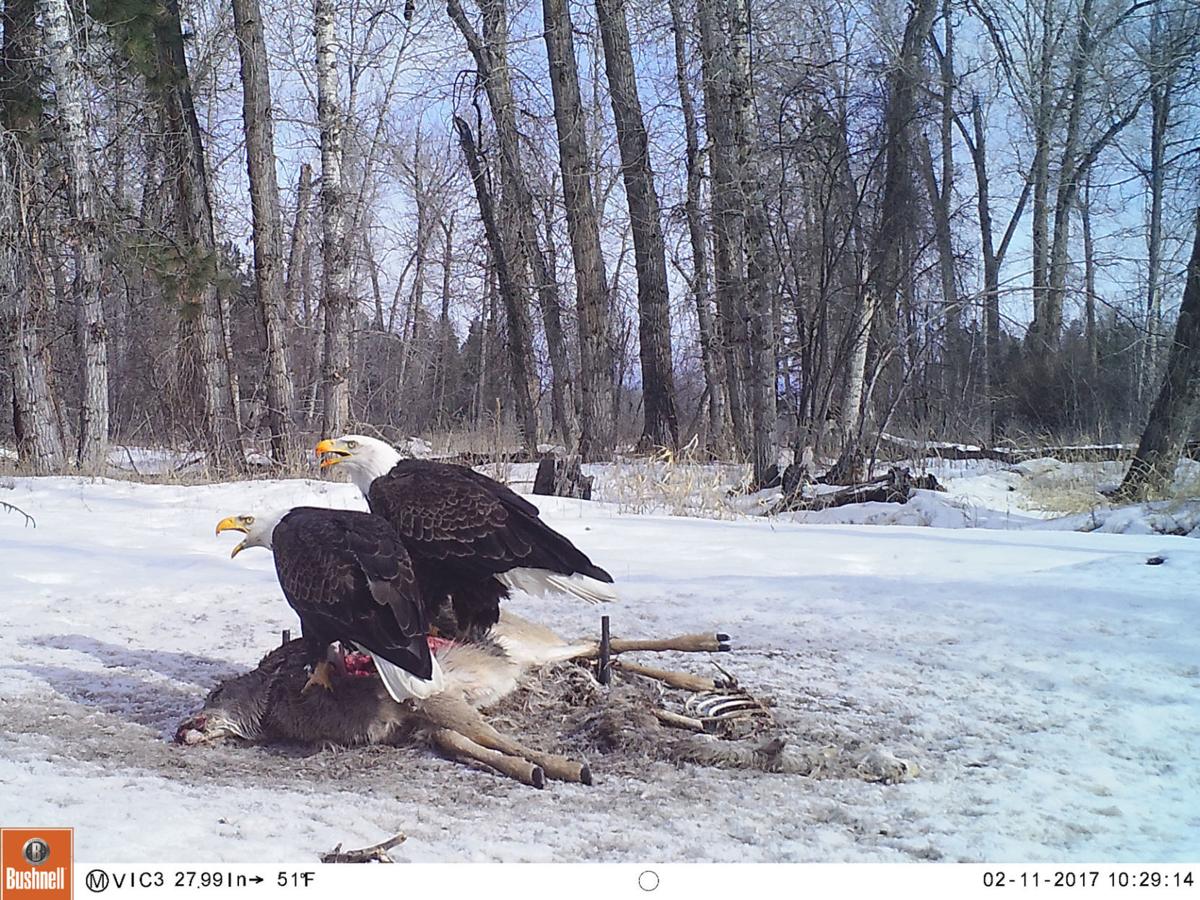 MPG Ranch researchers hope to distribute up tot 30 game cameras to hunters this fall to build on their successful research on eagles and other scavengers. 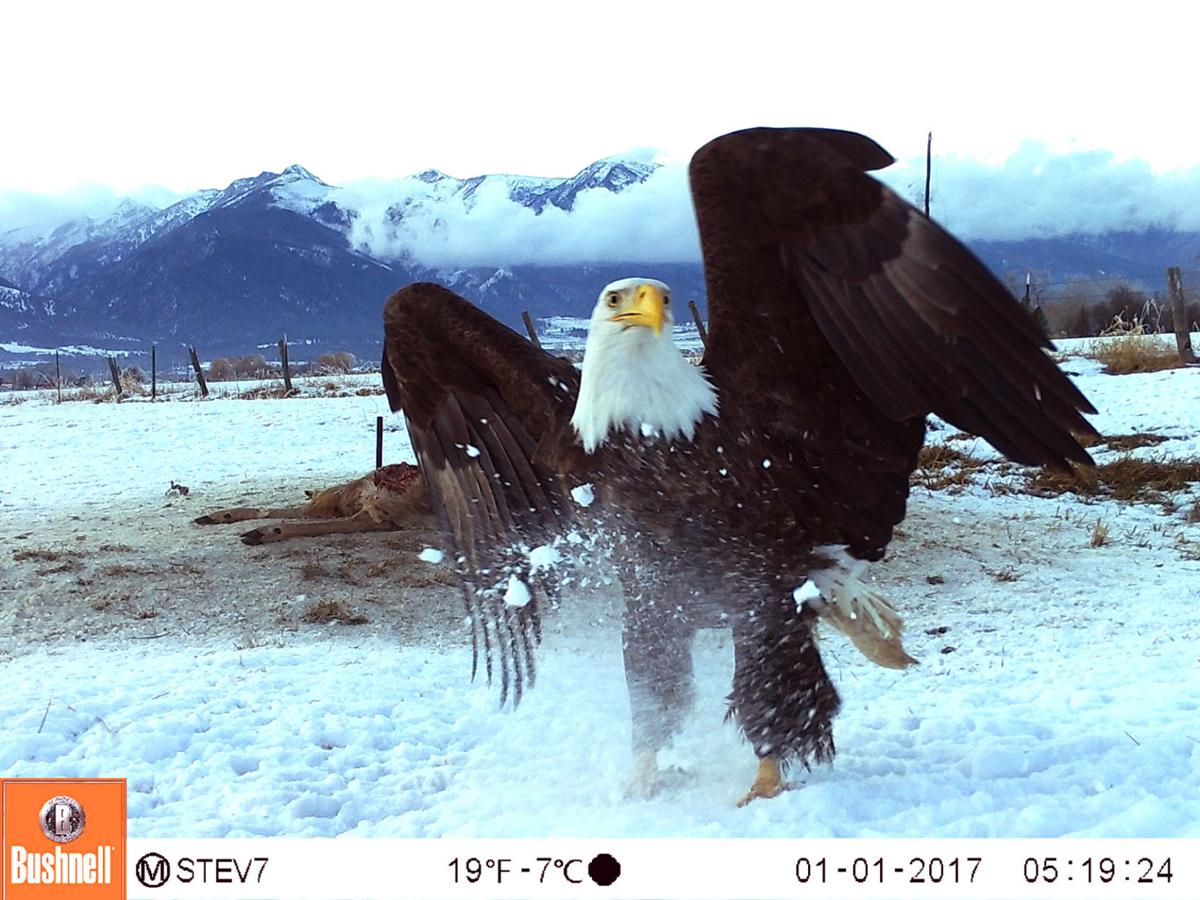 The MPG Ranch hopes to build on its Bitterroot Valley Winter Eagle Project this year with the help of local hunters. 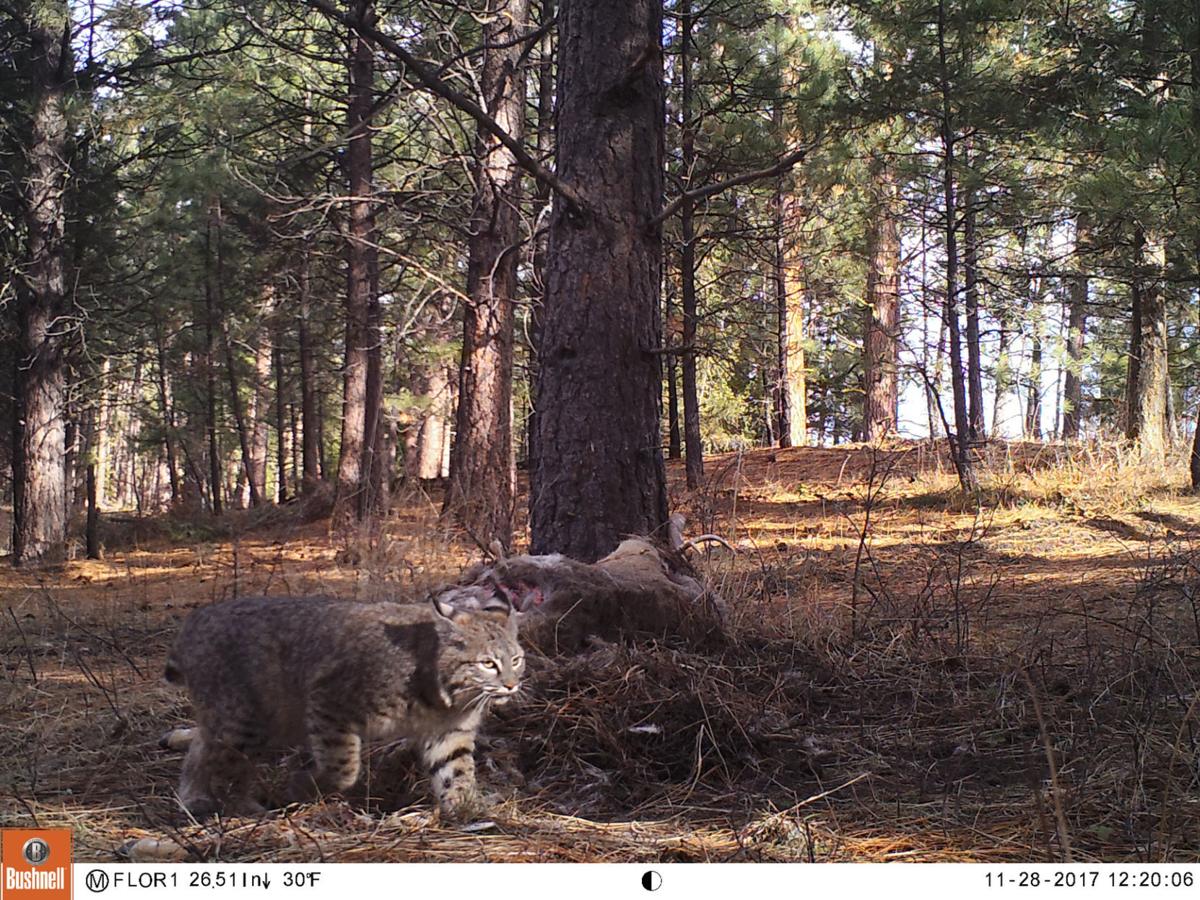 MPG Ranch researchers are looking for some hunters who would like be the next group of citizen-scientists for a new scavenger research project focused mostly on public lands.

On its wing was an orange tag with the number 62.

The eagle had been tagged in the summer of 2016 as a nestling on Santa Catalina, California. Somehow, it had found its way to the Bitterroot Valley some 850 miles away.

“The researchers there were not expecting young from the island to disperse or travel so far east,” said MPG researcher Kate Stone. “They thought it more likely that their birds would move up and down the coast.”

That surprise was just one of many to delight MPG researchers during their two-year long, citizen scientist-based Bitterroot Valley Winter Eagle Project.

The Golden eagles they captured and fitted with transmitters traveled over 2,300 miles north to breed in the most northern reaches Alaska before returning to overwinter in the Bitterroot Valley.

“Pretty wild when you think about it,” she said. “These birds are breeding in the very wildest of the wild places, yet they repeatedly choose to come back to the Bitterroot Valley year after year for overwintering. Which I think both makes our valley special and underlies that we should be doing our best to make this a spot that’s the best it can be for them.”

On that note, Stone and fellow MPG researcher Mike McTee hope that big game hunters in both the Bitterroot and Missoula valleys will be the next group of citizen-scientists to step forward to help the researchers learn more about wildlife that call this part of Montana home.

Every year, hunters provide an important food sources to scavengers such as eagles, bears and mountain lions in the gut piles and carcasses that they leave in the field. The U.S. Fish and Wildlife Service estimates that hunters produce about 1.5 billion pounds of carrion nationwide.

But no one knows for sure just what role that carrion plays in the natural world in western Montana.

Stone and fellow MPG researcher Mike McTee are hoping that hunters will be willing to set up game cameras on the gut piles or carcasses that are left behind on private and public lands. The cameras will document the scavengers that consume the carrion and highlight the role that hunters play in their local ecosystems.

The findings will be reported on MPG’s website: mpgranch.com. If enough hunters opt to participate, the researchers may write a scientific article on the study.

MPG scientists have already been investigating which scavengers feed on the ground squirrels that are shot for damage control and recreation.

For those hunters who want to participate, the MPG Ranch will provide them with a small, light-weight game camera and cable lock that they can carry during hunting season. If they harvest an animal, the hunters will place the camera on a tree or post near the gut pile.

“The cameras are tiny,” she said. “They probably weigh less than a pound…They are smaller than a typical Nalgene water bottle and will fit in the water bottle pocket on the side of a pack. Hunters won’t have to carry a lot of extra weight.”

Hunters can either choose to return to retrieve the camera in a couple of weeks or provide coordinates so MPG scientists can make the trek.

Stone knows that hunters are leery about sharing their favorite hunting grounds. She said the site location will be known only to the researchers. Any public report will include only the hunting district where the animal is taken.

“We are shifting our focus to public lands and trying to set up the camera in a more realistic natural setting,” she said. “This will be a different way of learning about scavengers and their ecology.”

If a hunter doesn’t want to carry a camera, but still wants to participate in the study, Stone said there are a couple of different options.

Private landowners who allow hunting could serve as a liaison for the researchers and ask sportsmen hunting on their land to consider carrying a camera. For those hunters who do their own butchering, Stone said they could chose to put a camera on the carcass that they drop on their own land or elsewhere where they have permission.

Tony Jones of the Ravalli County Fish and Wildlife Association likes the idea, but knows it could be a challenge for hunters who stray far into the field to find their elk or deer.

“I think it’s a great idea, but it probably depends on how far people go into the backcountry on whether they would want to carry a camera around,” Jones said. “I think I’m going to do it at my whitetail river spot.”

MPG Ranch’s decision to venture onto public lands is appealing to him as well.

“It’s a good tie-in for people who care about maintaining public lands,” he said. “We’re all working toward the same goal, which is more access and keeping public land open to the public. The more people pulling in that same direction the better.”

Sapphire Community Health Center in Hamilton has expanded its mental health services after recently receiving a federal grant of nearly $250,000.

With the first season in the books for new rules managing commercial use on the West Fork and the upper reaches of the Bitterroot River, the p…

Watch Now: Should my kid get the COVID vaccine?

Researchers wth the MPG Ranch hope that hunters will help them branch into a new study on scavengers this winter by agreeing to set up game cameras on the gut piles they leave behind.

MPG Ranch researchers hope to distribute up tot 30 game cameras to hunters this fall to build on their successful research on eagles and other scavengers.

The MPG Ranch hopes to build on its Bitterroot Valley Winter Eagle Project this year with the help of local hunters.

MPG Ranch researchers are looking for some hunters who would like be the next group of citizen-scientists for a new scavenger research project focused mostly on public lands.