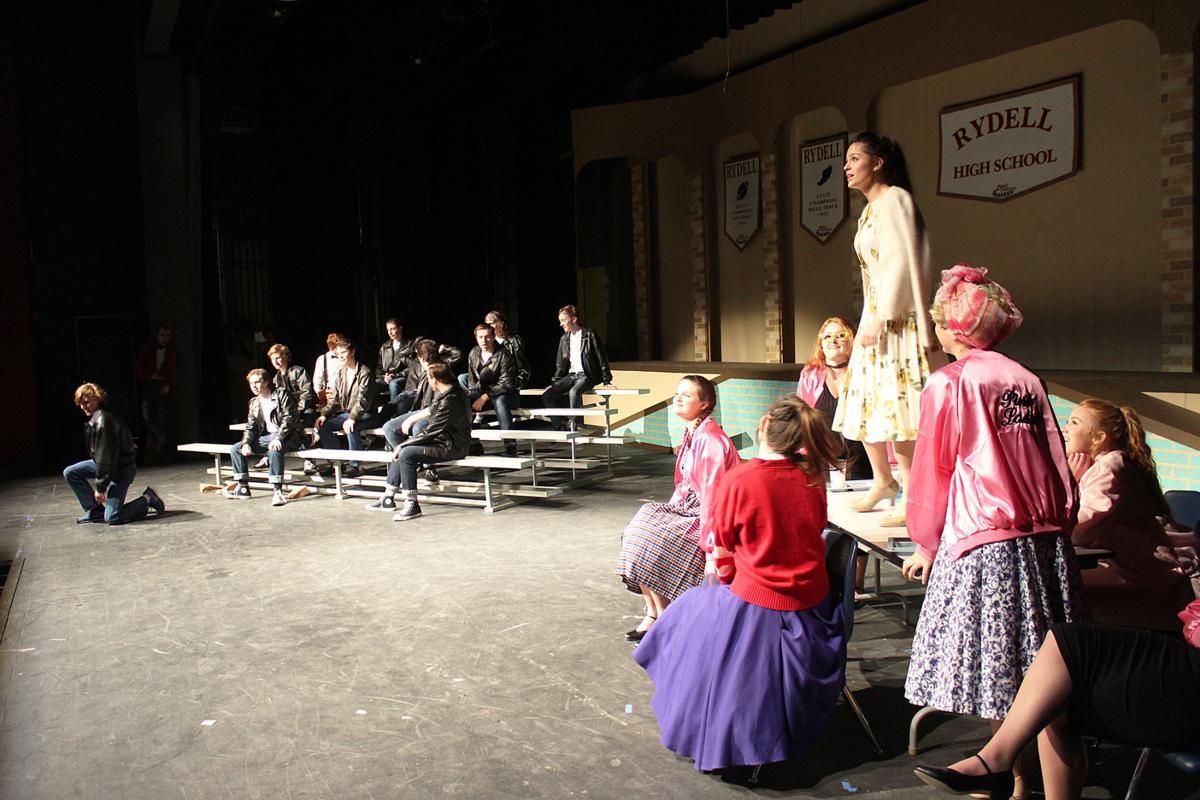 Rio Hammond (far left) as Danny and Elise Streibel (on table) as Sandy reminisce during “Summer Nights” part of the “Grease” musical production at Hamilton High School, March 23, 24, 25 and 26. 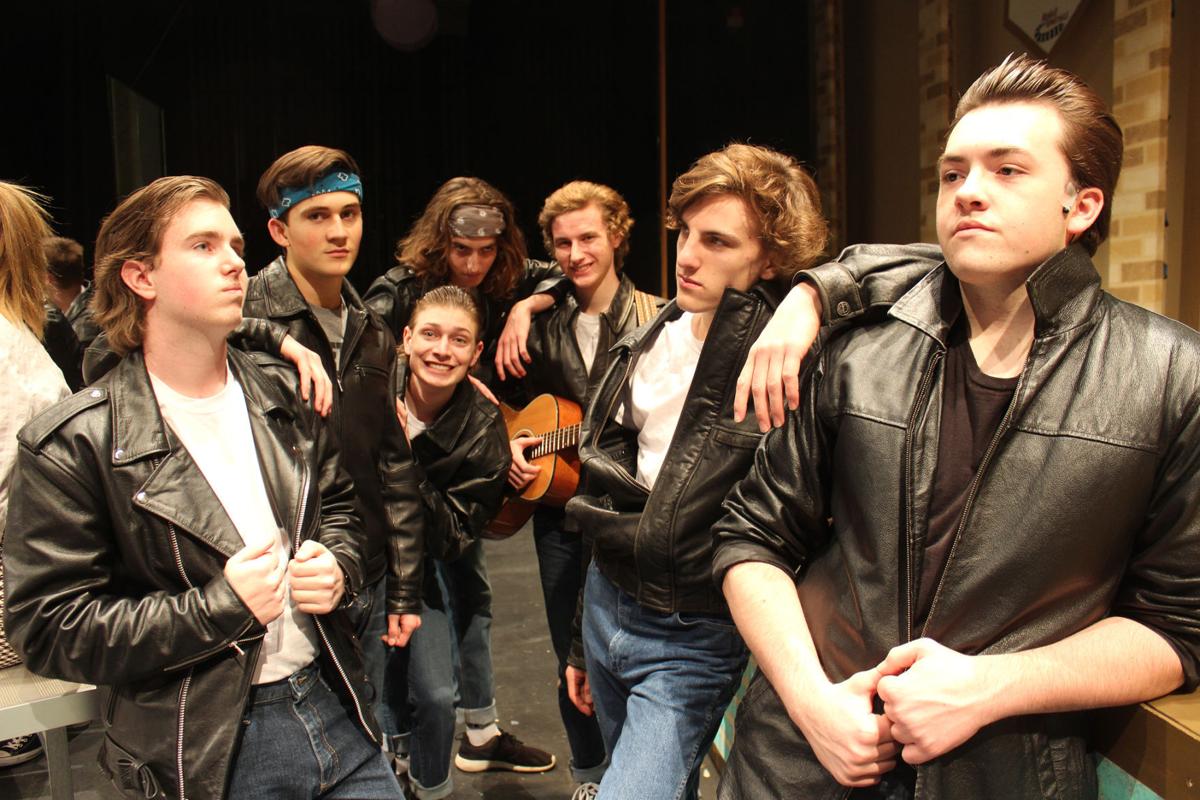 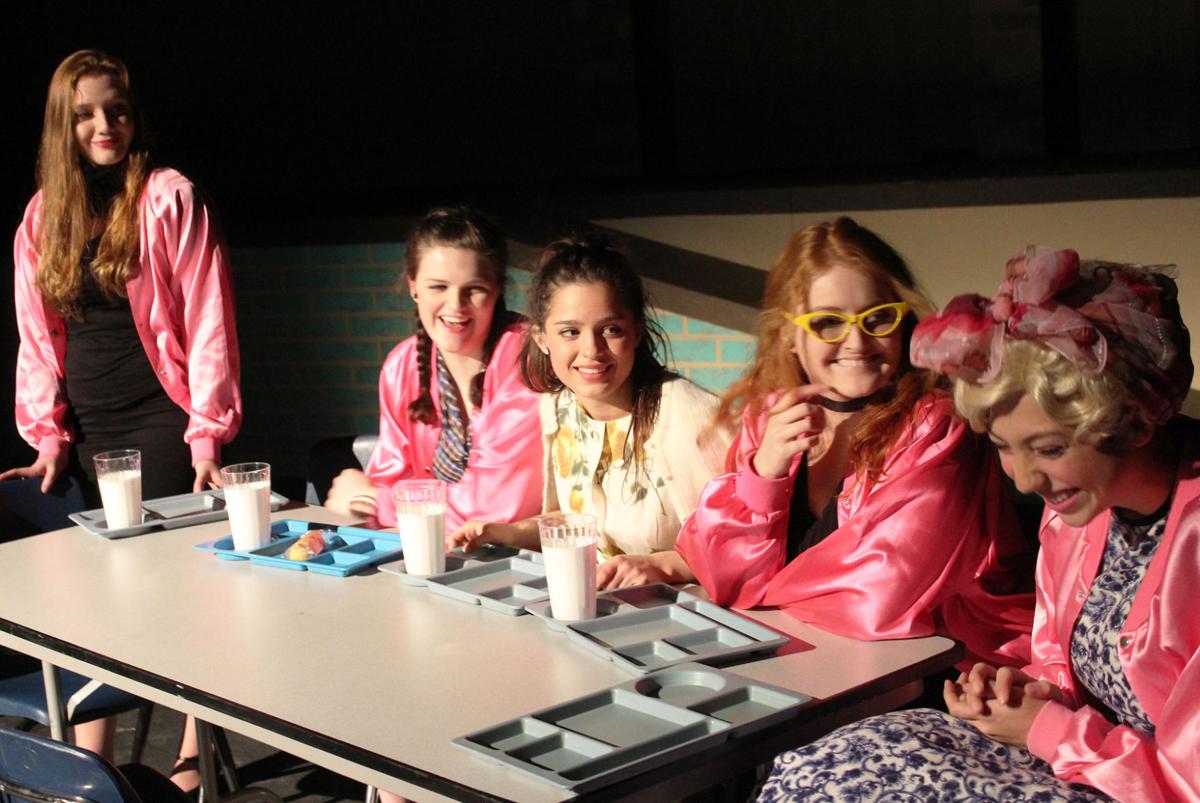 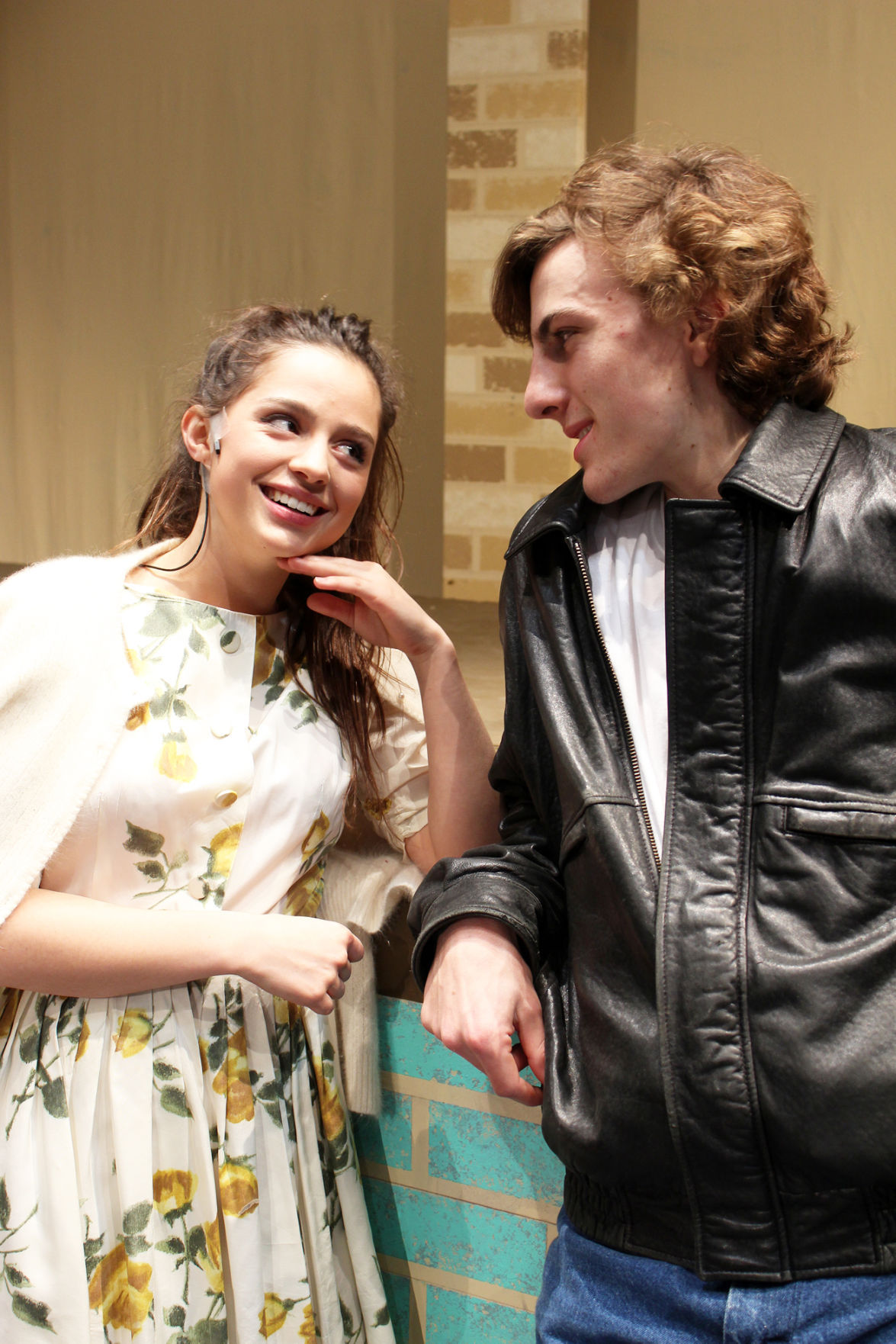 Elise Streibel (Sandy) and Rio Hammond (Danny) sing their hearts out in the Hamilton High School Choir Department’s production of “Grease,” March 23, 24, 25 and 26.

Upbeat songs, retro costumes and lively choreography by the Hamilton High School Choir Department will bring the play “Grease” to the stage March 23, 24, 25 and 26.

“The show has a lot of energy for a toe-tappin’ good time,” Bucheit said. “The musical came first and they adapted it for the movie so the music is different.”

“I think it is unique that we do our musicals as a choir department – concert choir does them,” she said. “Every singer is strong. Many times when you go to something like this it's theater folks where singing is their second talent. Their primary talent is acting. It is nice to do musicals with singers and every singer in this cast is solid.”

The cast includes over 60 students and all Concert Choir members are involved because it is a class project.

“Danny is played by Rio, a junior who has been to All State and All Northwest and has been soloing throughout his high school career,” Bucheit said. “He’s never been in an acting role so it has been a challenge for him. He’s done very well.”

“She is amazing,” Bucheit said. “'There are Worse Things I Could Do’ is amazing and very powerful. She’s a powerful actress too. I’ve enjoyed working with her. She’s been consistent throughout the rehearsals. She brings it to every rehearsal.”

“Grease” is about the life and time of Rydell High School teenagers.

“The ‘greasers’ are not the wholesome children in the school so people need to keep that in mind when they come,” Bucheit said. “They are the hoodlums. The kids have been practicing with candy cigarettes. It’s been fun.”

“There is a ton of choreography in this show, it probably too 75 percent of our time,” Bucheit said. “The visual effect of every song is stimulating to watch. Stephanie has them doing flips, tumbling and is using all of their unique abilities. This show is aurally and visually stimulating. I think people will really enjoy it.”

“When the concert choir and I decided to produce "Grease" Rick and I designed the set at home. It was all about problem solving,” Bucheit said. “I’d say I need the set to do this’ and he’d say ‘well that won’t function.’ I have the creative ideas and he makes it function and makes it work. I never have to worry about anything he makes falling down. It is sturdy enough to live in. He’s an RN so safety is his primary concern.”

The set has two giant scenes on one 25-foot set piece that rolls out then turns around for the other scene.

Rich Bucheit said his job with the set it to create ambiance.

“I’ve tried to make it as multi-level and as dynamic as possible,” he said. “My job is to support the actors and make them feel like they’re really there.”

Costumes came from the Hamilton Playhouse, the HHS wardrobe collection and actor’s efforts.

The actors shared their thoughts on the production.

“It’s been fun rehearsing with everybody we are all really close,” Fussell said. “I like playing Jan because she is the character who eats all the time. I get to eat during rehearsal and the performances.”

“’Freddy My Love’ is a hard song because there are so many harmony lines,” Fussell said. “The harmonies are amazing and a new song for everyone to look forward to.”

“It has been fun and interesting to be that character,” he said. “He’s the second leader of the greasers and him and Danny just sort of mess around with the other kids. It is fun to pick on kids.”

Majors said the song “High School Hop” is the most challenging song because actors have to dance and sing at the same time.

“I get out of breath and have to keep it strong,” he said.

“I’ve been in a lot of theater but have never been a lead role so it has been challenging for me,” Streibel said. “It’s been fun to figure out who she is as a character and portray her right. The dancing and singing is great, I especially like ‘You’re the one that I want.’”

“In the movie his name is Putzy and he’s know for mooning people,” Belanger said. “Jan and I sign ‘I’m Mooning Over You’ and later in the show the other thunderbirds pants me on stage. I’m a silly weird side character.”

Bailey Evans said playing the character has been a good challenge

“Playing Rizo is super fun because I’m mean and can exaggerate that a lot,” Evans said. “I’m so mean to Elise in this show which is fun because we’re best friends in real life. The musical is super fun and it is great to play a strong character. My favorite song is ‘Look at Me, I’m Sandra Dee.’”

“Royalties cost $5,000, twice as much as we’ve ever done, so we really need to sell tickets,” Bucheit said. “It’s going to be a fun night. We try to rotate out musicals and we did "Les Misérables," then “Hair Spray,” then “Phantom” and now this. Heavy, light, heavy, light so the rotation is good.”

Local man selected as Montana’s Builder of the Year

Tom Stringham with Beck Builders Inc. is the Montana’s Builder of the Year and the state president for the Montana Building Industry Association.

Three young Bitterroot filmmakers will host a red carpet screening of their new film "Trail of Justice" on Saturday, Feb. 29, in Hamilton. Tickets are free and everyone is welcome.

Michael Roger English passed away at his home in Hamilton on Feb. 5, 2020.

Back Country Horsemen members from across the state will arrive in Hamilton for their annual convention on March 20-22.

Rio Hammond (far left) as Danny and Elise Streibel (on table) as Sandy reminisce during “Summer Nights” part of the “Grease” musical production at Hamilton High School, March 23, 24, 25 and 26.

Elise Streibel (Sandy) and Rio Hammond (Danny) sing their hearts out in the Hamilton High School Choir Department’s production of “Grease,” March 23, 24, 25 and 26.