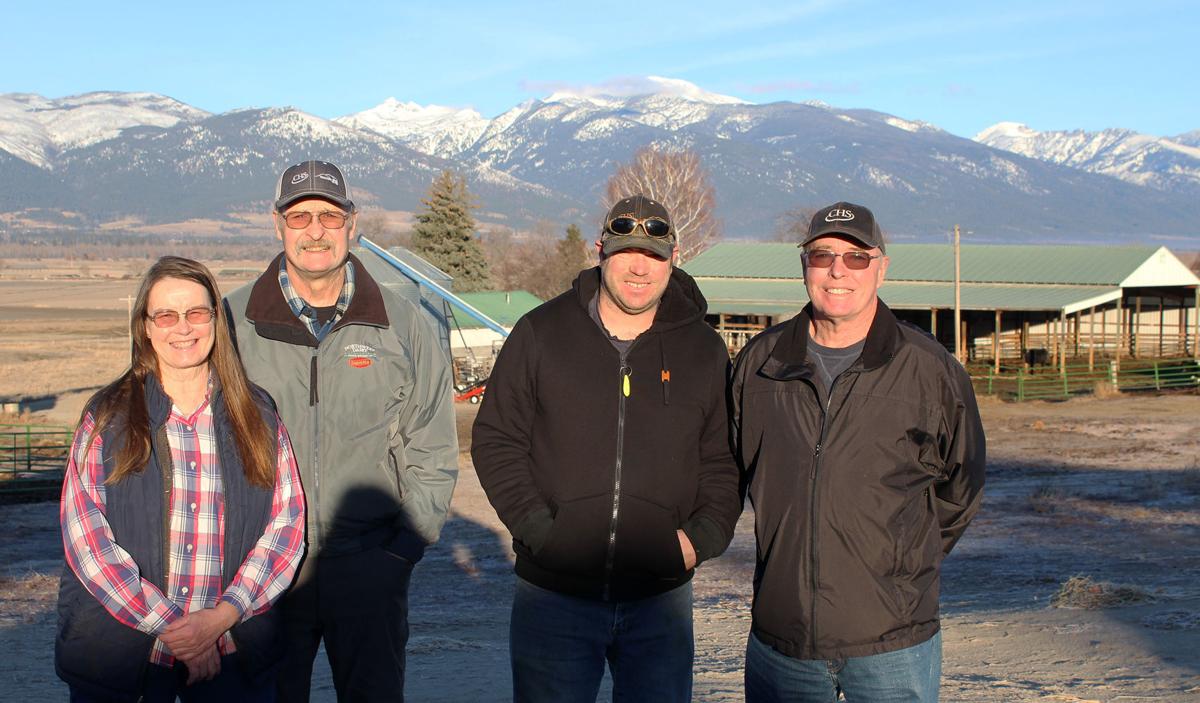 Trudy and Tim Huls stand with Brody and Dan Huls on their land that was a family legacy of dairy farming for over a century. The Huls Dairy, part of Ravalli County since 1908, sold their milk cows during the pandemic – the spring of 2020. 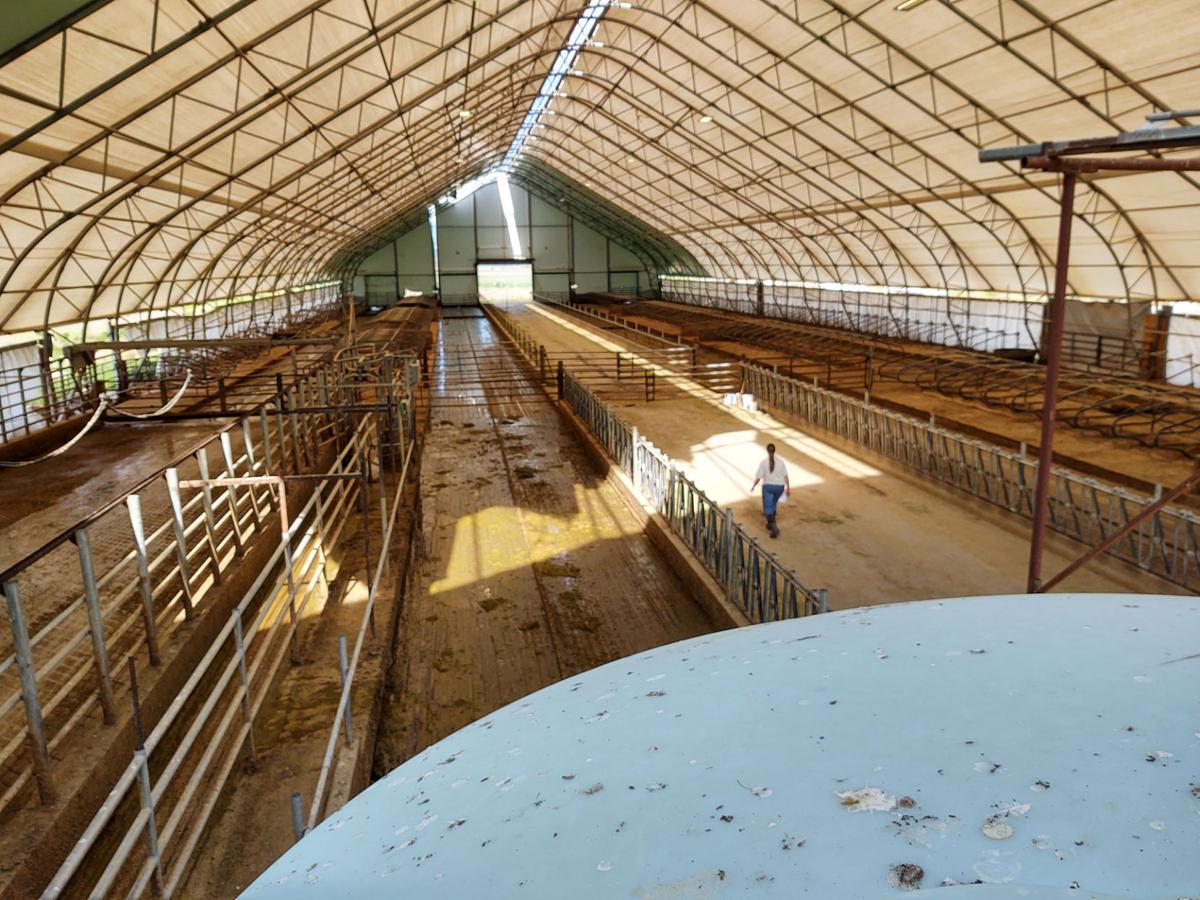 There are no milk cows in the empty feed alley of the fabric-covered free-stall barn at Huls Dairy Inc. 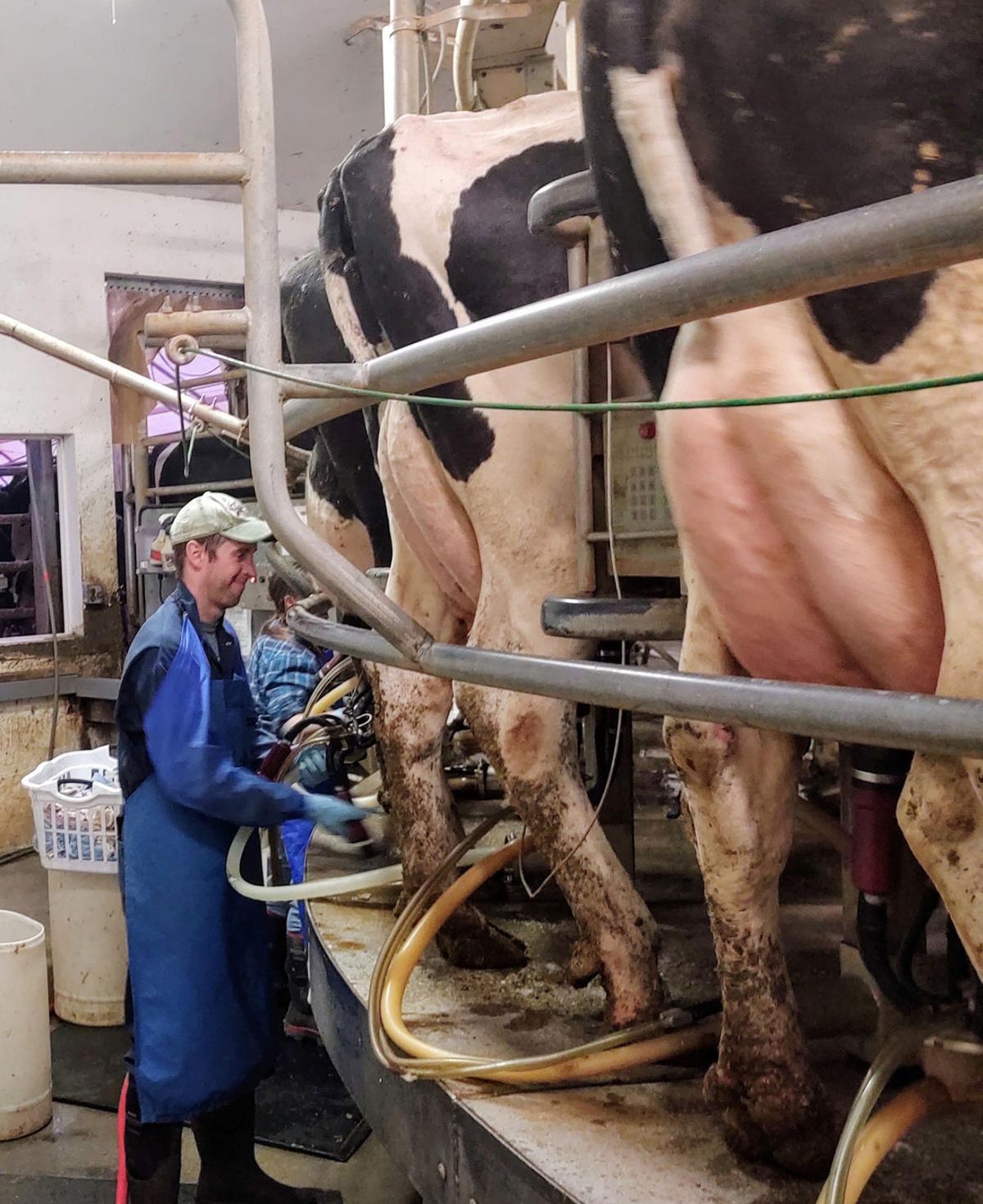 Tim Huls’ son Aaron completed the milking of cows in the carousel milking center when the Dairy was in operation. “We toured people from many different countries and probably all 50 states,” Tim Huls said. 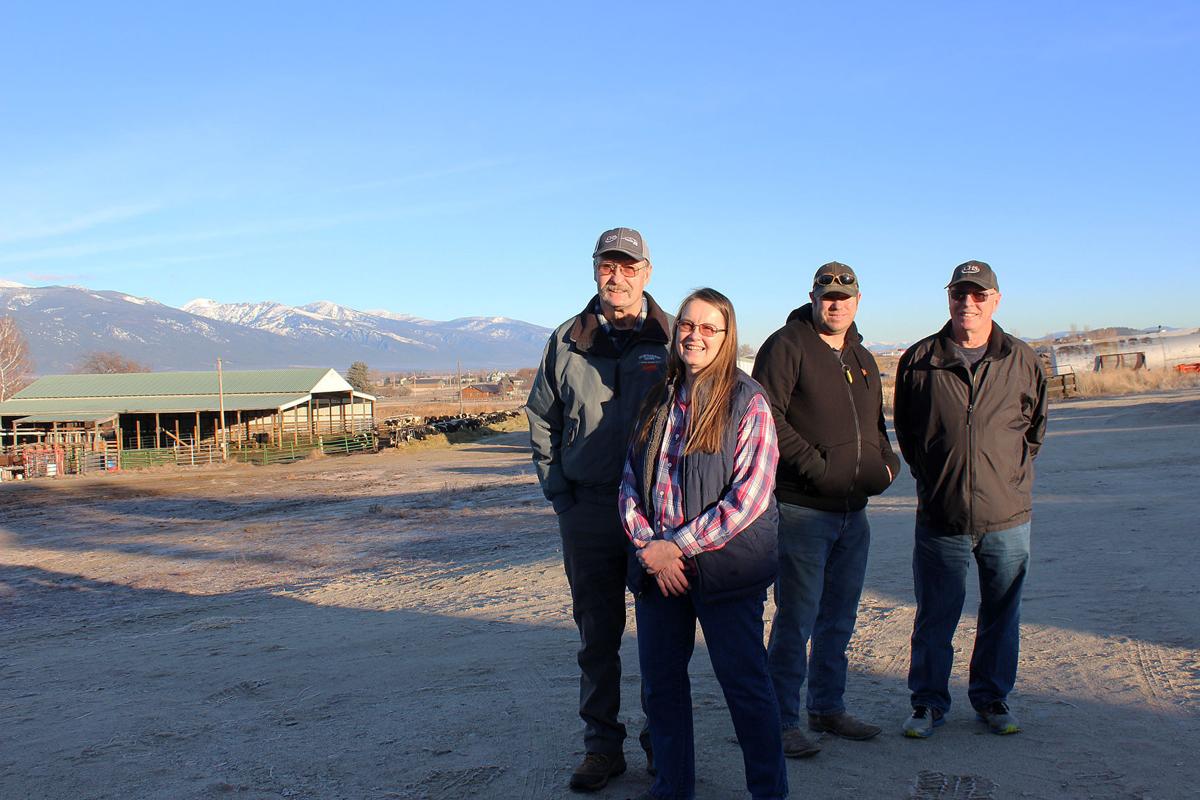 Tim, Trudy, Brody and Dan Huls enjoy the sunshine and view while reflecting on their dairy legacy and heritage on Friday. 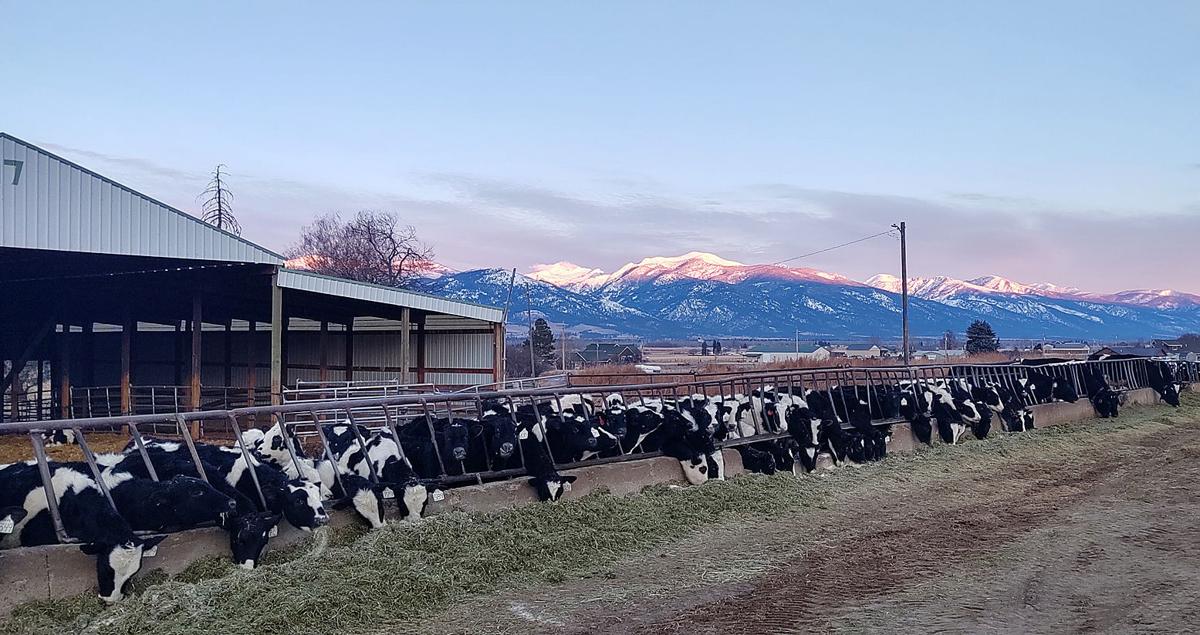 Heifer raising continues at Huls Dairy but the milk cows sold and milking has ceased. 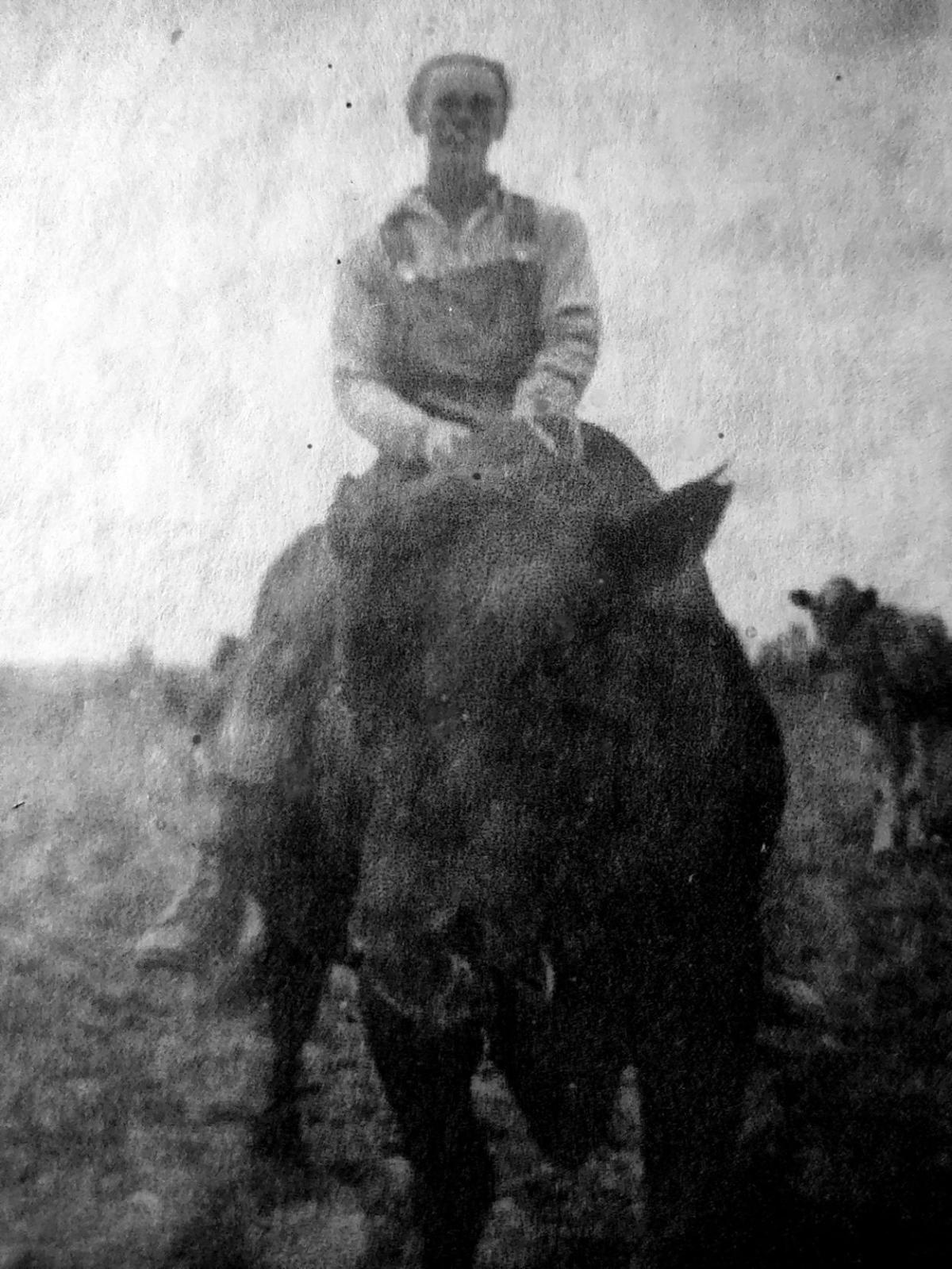 The Huls Dairy, part of Ravalli County since 1908, sold their milk cows during the pandemic — the spring of 2020.

The change means the end of an era and the end of dairy farming for the Huls family of Corvallis.

Tim Huls said he was blessed to be raised in a Christian home and to know all his grandparents who were also believers.

“I became a believer at a young age and that turned out to be so important, not only for my eternal destination but for negotiating life as a dairy farmer,” Huls said. “It has been said that to be successful in farming and especially in dairy, you have to work like everything depends on you and pray like everything depends upon God. There is a lot of truth in that. I have witnessed many miracles.”

In 1910 the Huls family milked their cows, separated the cream and took it to a creamery.

“They fed the skimmed milk to their hogs, they had chickens and all the things small farms had, that’s what we were, but we were in the dairy business because we were taking cream to town,” Tim Huls said. “Grandma taught school, had a little money from school and they picked up some land and started expanding. It was ‘Spencer and Son’ as dad farmed with grandpa and one of the earliest farms to go to a Grade A dairy operation in 1951.”

Other milestones included remodeling a barn, doubling the herd by the purchase of Bob and Virginia Smith’s cows in 1969 and adding family members. David and Jennie Huls bought the Ravalli County Creamery and their sons, Tim and Jeff, bought the dairy from them in 1977. Sons Dan and Bruce had already purchased the land next door to raise crops to feed the cattle.

The Huls Dairy was incorporated in 1990. Being progressive and eager to embrace technology they irrigated with gravity flow, added computer feeders, changed to computerized cattle identification and updated the old barn.

“Before the fall of the Soviet Union we had a bunch of folks from Kazakhstan come out and tour our facility,” Tim Huls said. “They wanted to see our technology.”

The Huls family was awarded the Montana State University Family Business of the Year Award in 2000. They added a new facility (carousel milking center and fabric-covered free-stall barn) in 2003 and added a Methane Digester and compost operation in 2009 which generated even more chores and interest.

“We toured people from many different countries and probably all 50 states,” Tim Huls said.

About a year ago the Huls family decided it was time to close the dairy.

“We decided that discretion was the better part of valor and we should think about a little less intense life,” Tim Huls said. “It is a 24/7/365 way of life where you milk three times a day, feed the cows three times a day and all that goes along with it. Sometimes we had 800 cattle to support our milking herd of 350 to 400 cattle. There was an awful lot to take care of.”

He said the driving forces in the decision were the difficult economics and running out of family resources.

“We made an error if we wanted to perpetuate it in the family, and that is we sent our kids to college and they got an education and they decided this isn’t the best gig in the world,” Huls said. “One thing about a family farm of our size is that most of the labor has to come from family.”

He said the Huls Dairy was too small for family to just be managers, but that everyone needed to participate in the labor.

“When your knees are wearing out, your body is getting sore, you’re tired of getting up at that time of the morning and your kids are saying they are happy doing other things, we decided selling wasn’t a bad thing,” he said. “We don’t look at it as though we failed or are sad our kids aren’t coming back; we’re just looking at it as times have changed and we are not willing to make the changes to keep going in the industry.”

The Huls Dairy sold parts of the farm and closed their dairy business in 2020 during the COVID pandemic.

“We sold parts in an absolute crazy year,” Tim Huls said. “Primarily, we did two things — we sold the milking cows and the bottom place so the sod farm could expand. During the challenges of COVID, we didn’t know how anything would be possible. It all worked out and was too much to be a coincidence. It’s been quite a deal.”

Huls said it was amazing that they were able to sell cows during COVID lockdowns. He credits God and thanks the dairy’s accurate record keeping.

“God was really good to us in terms of having people contact us who were interested,” He said. “We felt God’s hand in making the connections, transactions, keeping us safe during the loading and the hauling and the transportation details. It’s a huge undertaking trying to wind down an operation like ours. This is harder than building it.”

There are mental things to deal with in winding down including still working the cows that remained as the sales happened slowly and working out transactions to make sales happen.

“Our cows did not go to one individual because of COVID, we sold groups of cattle to six different individuals,” Tim Huls said. “That complicated and stretched out the sales but they all turned out to be a blessing. God’s hand has been in and confirmed our decision to do what we’ve done.”

All the milk cows are gone so there is no milking three times a day. Tim and Trudy Huls are breeding replacement heifers for other dairy farmers.

“We’re raising young stock,” Tim Huls said. “We still have close to 250 head of cattle; it still keeps you busy. I’ve been picking up the eyesores a bit. You get that done and say, ‘why didn’t we do that 20 years ago, well, I didn’t have time.’”

“We’ve been blessed to be where we are to be where we are and to be a multi-generation farm,” he said. “The ability for us to be able to look back on what our forefathers did is very precious to us and very important. If it were not for them, we would not be here.”

Tim Huls wrote a poem when “a friend exited the dairy business several years ago” called “Another One’s Gone.”

“I knew that one day it would be about us,” he said. “It turns out that many dairy farmers and folks that know and love dairy farmers can identify with the poem.”

“Another One’s Gone” by Tim Huls

The neighbor sold out the other day, the milk cows are all gone, I guess it was his time to retire, he’d been working hard so long.

I was at his place a little while the day the cattle went, I wondered if he was some relieved, all the work they represent. For 50 years he’d been gettin’ up way before the sun, many days it was past 10 p.m. before his chores were done.

Vacations were few and far between, that’s the way with dairy life, now maybe he’d have some time to spend and travel with his wife. He wasn’t thinking about such things, there was sadness in his eyes, the herd he’d worked so hard to build was now some other guy’s.

His life revolved around those cows, he gave them his great devotion, now he helped them load, watched them go, and swallowed his emotions. He never had a nine to five, his work was never done, no holidays or weekends off, he was always on the run.

Now cold turkey, all at once he’ll be winding down, maybe he’ll subdivide, sell the land and move on into town. I wonder if anyone will notice, does anybody care, will neighbors celebrate the dairy’s close, and fresher evening air?

Oh, they will still have lots of milk there in the dairy case, but it won’t be fresh and local, it’ll come from a distant place. The hired crew will miss their jobs, I wish ‘em all the best, they’ll struggle finding dairy work, there aren’t that many left.

The grain man lost a real good market and the hay man lost one too, the farm supply store will take a hit, now that he is through. Oh, I wish there was some profit, some hope in the milk industry, then my family farm wouldn’t be ending with generation me.

I know that things are always changing, and time keeps marching on, but it makes me sad when a farm shuts down, and another one is gone.

The poster art of Hamilton Middle School student Lauren MacGillivray is on a billboard near Highway 93 north of Woodside where it will remain for three months thanks to the Ravalli County DUI Taskforce Art Contest.

Using the element of surprise, Soroptimist International in Hamilton presented $7,000 in scholarship awards to winners just before Christmas.

Trudy and Tim Huls stand with Brody and Dan Huls on their land that was a family legacy of dairy farming for over a century. The Huls Dairy, part of Ravalli County since 1908, sold their milk cows during the pandemic – the spring of 2020.

There are no milk cows in the empty feed alley of the fabric-covered free-stall barn at Huls Dairy Inc.

Tim Huls’ son Aaron completed the milking of cows in the carousel milking center when the Dairy was in operation. “We toured people from many different countries and probably all 50 states,” Tim Huls said.

Tim, Trudy, Brody and Dan Huls enjoy the sunshine and view while reflecting on their dairy legacy and heritage on Friday.

Heifer raising continues at Huls Dairy but the milk cows sold and milking has ceased.