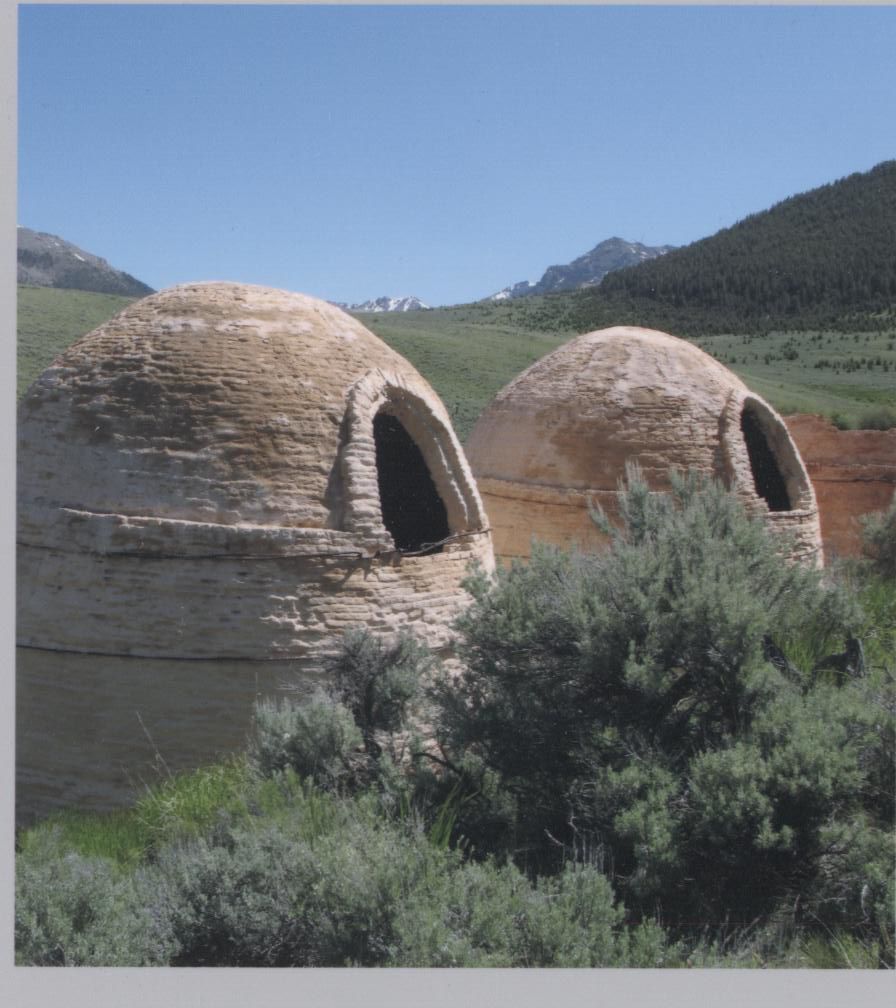 Charcoal Kilns at the foot of the Lemhi Range. 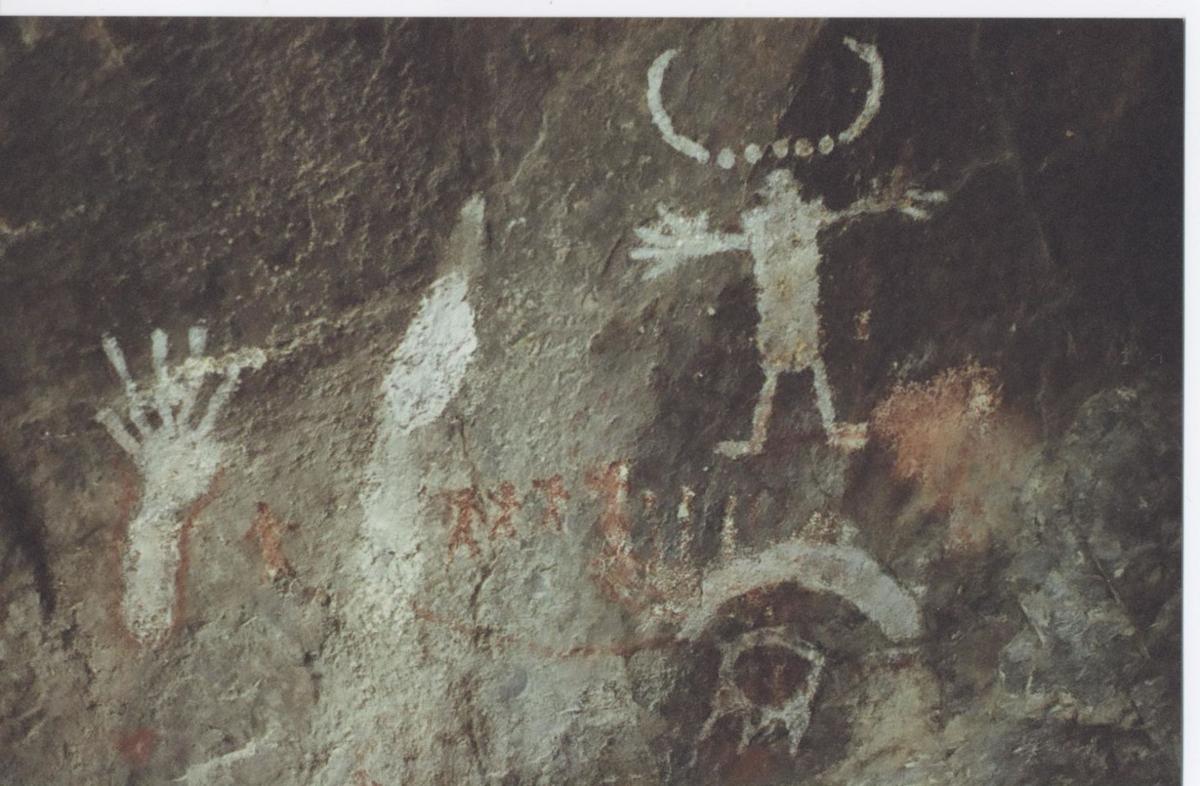 The Birch Creek Shaman and accompanying images in white pigments. 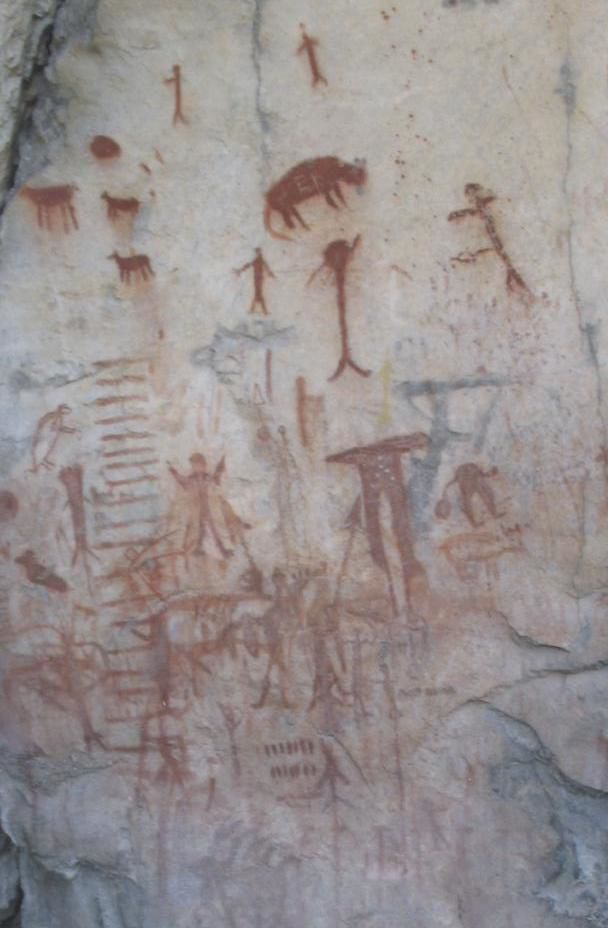 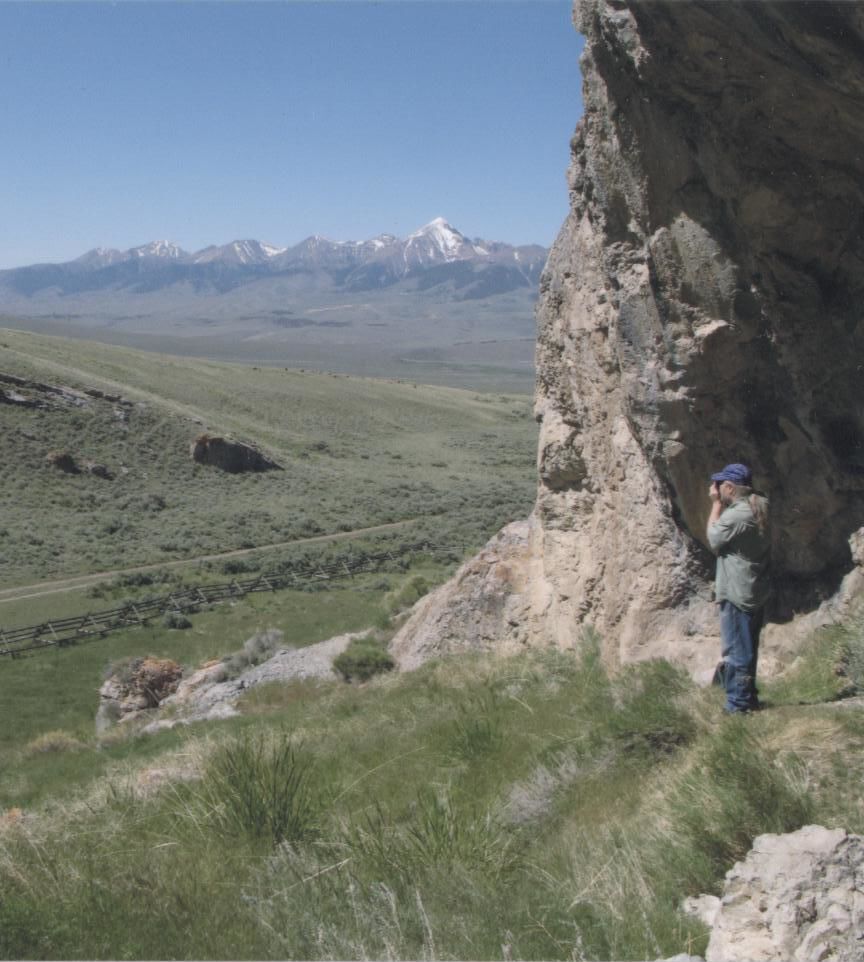 A panoramic view from the Shaman’s Overhang.

Summer is too short in the Rocky Mountains! Well, I guess that’s just a matter of opinion, but it’s how I feel, even though I’ve gradually come around to accepting it. All I can really do is get out there and enjoy it while it lasts, because as I’ve already said, it happens fast!

Several years ago we took advantage of the long days of summer and booked a BLM tour of a special pictograph site located in central Idaho. The Birch Creek Valley lies just south of the Lemhi Valley, and is connected by a wide-open bench known as the Gilmore Divide. The valley itself is high and wide, and hemmed in partially by the southern end of the Beaverhead Range on the east, and the Lemhi Range on the west.

The extreme southern end of the valley opens up out onto the Snake River Plain, where a mere trickle of what’s left of Birch Creek eventually disappears into the volcanic wasteland that makes up that particular part of the Tater State. Still, despite the obvious arid conditions, snow-clad mountain peaks reach up forcibly into the immense blue skies on both sides of the valley, towering majestically over the long-empty spaces resting peacefully below.

There is no town really to speak of in the Birch Creek, just a lonely gas pump outside a little bar and café marked with a dot on the map as Lone Pine, and it was there that we met the ranger who would guide us to the pictograph sites. The ranger had added another couple from Idaho Falls to the group, so all in all there were seven of us, and I honestly believe that we actually managed to double the population of the valley that day.

Even though the valley is relatively uninhabited today, it still serves as a main thoroughfare for traffic traveling north and south between Salmon and Idaho Falls on Highway 28. This route has served native populations for eons, and according to an interpretive sign along the highway, one of the earliest recorded visits by white men was a fur-trapping party that passed through in 1818. Joseph Cote was a French-Canadian trapper who had traveled along with Michel Bourdeaux and Francois Gregoire on David Thompson’s Columbia River Expedition of 1811. After his tour through the valley in 1818, all of the trappers and mountain-men came to know the isolated region as Cote’s Defile.

Archaeological digs done in the early sixties have shown that human habitation goes back more than ten thousand years in the Birch Creek Valley, although there was apparently a period of roughly four thousand years where extreme drought conditions seem to have kept activities down to a bare minimum. There are really only a couple of live streams in the valley, and Birch Creek itself is born out of a series of springs located at the upper end of the valley near the Gilmore Summit. The area encompassing this upper region has been inhabited throughout history, even through the driest of years. The entire north end of the valley was originally a boggy marshland, until cattle ranchers moved into the area in the late 1800’s and drained the wetlands for the purpose of reclaiming and irrigating the rich rangeland.

Our little caravan headed out from Lone Pine through the pungent sage towards the east side of the valley, following a dry gully up to the mouth of a rocky canyon. Instead of following the road through the canyon, we suddenly veered off, making a steep ascent up a switchback that brought us out onto a rolling steppe covered in yellow lupine and balsamroot, and various other types of semi-arid loving wildflowers, which stretched out endlessly across the gradually sloping ridges.

The road took off on a course due north over these long slopes of sagebrush and flowers, occasionally dipping down into arroyos or dry gulches, and then quickly climbing back up onto the next long span of tableland. At times it almost seemed like more of a rangeland roller-coaster ride than anything else! We passed by the mouths of several enticing canyons as we worked our way to the first site, which was tantalizingly referred to as Jaguar Cave. Finally we turned into a narrow canyon where large gray and eroded rock outcrops guarded the entrance. A huge cliff-face on the north side of the canyon, commonly known as the Shaman’s Overhang, provided the indigenous people with an excellent shelter from the weather, complete with a sunny southern-facing exposure.

After passing through a rustic rail fence we began our climb up the grassy slope to the primitive site. There are several panels of pictographs located along the edge of the rock shelter, most are tally marks and stick figures in red ochre, but the prize of this site is an 18-inch Shaman or medicine man, painted in white pigments. These pigments were usually made from powdered minerals and were added to a base such as animal fat, blood, eggs, tree sap, or vegetable oils as a bonding agent. Three other prominent pictographs accompany the Shaman, including what appears to be the likeness of a supernova that occurred over the starry skies of North America in 1045 A.D. This unusual celestial event was actually recorded through pictographs and petroglyphs at several other Native American sites across the west. Experts believe that the four large images were daubed onto the rock by a medicine man that may have been seeking out a source of spiritual power connected to an alternate reality. The chalky-white Shaman seems to deliberately hover over the other images in a masterful pose, as if he were conjuring up the ghostly visions for all to see.

A little ways off, on the lower end of the overhang, a narrow path leads down to the entrance of a hidden grotto. The entrance to Jaguar Cave was apparently blocked off about nine thousand years ago, and was only discovered during an archeological dig at the site in the 1960’s. Even though there are no pictographs in the cave, a 12,000-year-old period of human habitation was revealed as the scientists uncovered a horde of stone tools scattered around an ancient hearth littered with a wide variety of butchered animal bones.

Over forty species of animals were found in the cave, including camels, lemmings, caribou, and the extinct North American lion. The excavation also proved that the cave was used for about three thousand years before the entrance was totally blocked off by falling debris from above. On the muddy floor of the cool damp cave, we witnessed the fresh tracks of a large wolf that had passed through more recently. We were also pleased to note that the remote location was extremely well preserved and remarkably free of the thoughtless scribbling and bothersome plundering that is all too often encountered at many similar sites.

After a thorough examination of the paintings, we turned around and headed back to Lone Pine for lunch.

When everyone had finished up their meal, we all drove south to another rock shelter near Blue Dome, which reportedly gets its name from the rock outcrop at the head of Skull Canyon. The BLM ranger was supposed to have a key that would allow us to drive through a tract of private property to the site, which is located on a landlocked parcel of rim-rock owned by the Bureau of Land Management. Apparently, the padlock on the gate had been changed recently, because the key wouldn’t open it, and the ranger made a hasty call to his supervisor to ask what he should do next. In the end, we left our vehicles behind and passed through the barbed wire fence on foot, with the ranger jokingly reassuring us that we “probably wouldn’t be shot” if we all stuck together!

The Bison Rock Shelter is one of several that were formed long ago when Birch Creek was forced up against the eastern mountain range in prehistoric times. The creek gradually moved more towards the center of the valley as the ice-age glaciers of the Lemhi Range receded. After crossing a large pasture, we came to a rail fence, which keeps the wandering stock from gathering in the large overhangs during bad weather. The pictographs here are mostly on two large panels and represent a lot of different animals and symbols, many of which will forever remain a mystery to modern men. One headless human figure seems to be walking along with his own head held in one of his hands! Here again most of the images are fairly well preserved, though because of the proximity to the highway, there are some signs of disrespect in the form of graffiti and vandalism. The buffalo seems to be the most prominent creature portrayed, and most of the paintings are done in red ochre, though some blue, yellow, and black pigments were also used.

As we said our goodbyes to the BLM ranger and our friendly Idaho companions back at the gate, a jeep pulled up into the wayside and a ranch hand walked over to check the padlock on the chain. The ranger went over to explain what we were doing. “Oh,” said the ranch hand, “you all were out looking at the hieroglyphics, huh? Lots of people do that.” On our return trip we stopped at some charcoal kilns that were left over from a brief period when the valley came alive with mining activity in the 1880’s. I understood the charm of precious metals that had brought so many miners to this desolate place, but in my case it was the fleeting days of a short summer and the image of a Birch Creek Shaman that had lured me away from my Montana home.

A rendezvous in the Bitterroot

One of the more challenging obstacles confronting the U. S. Pacific Rail Road Survey was in providing adequate provisions for an expedition of such magnitude and scope. The job of transporting supplies to the rendezvous site at Fort Owen in the Bitter Root Valley, fell into the capable hands of Lieutenant Rufus Saxton.

When the U.S. Pacific Rail Road Survey was organized in 1853 by an act of Congress, two men were selected to fill the position of civil engineers for the examination of the northern route.

Drawing a line in the sand

The way we communicate says a lot about who we are and why we do the things we do. I’m not sure that the pen is actually mightier than the sword, but oftentimes a few firmly written words of warning can serve to avert an unnecessary act of aggression.

Charcoal Kilns at the foot of the Lemhi Range.

The Birch Creek Shaman and accompanying images in white pigments.

A panoramic view from the Shaman’s Overhang.