In his ruling, Recht said Dewey denied the public’s constitutional right to participate and know about a controversial contract for IT services. 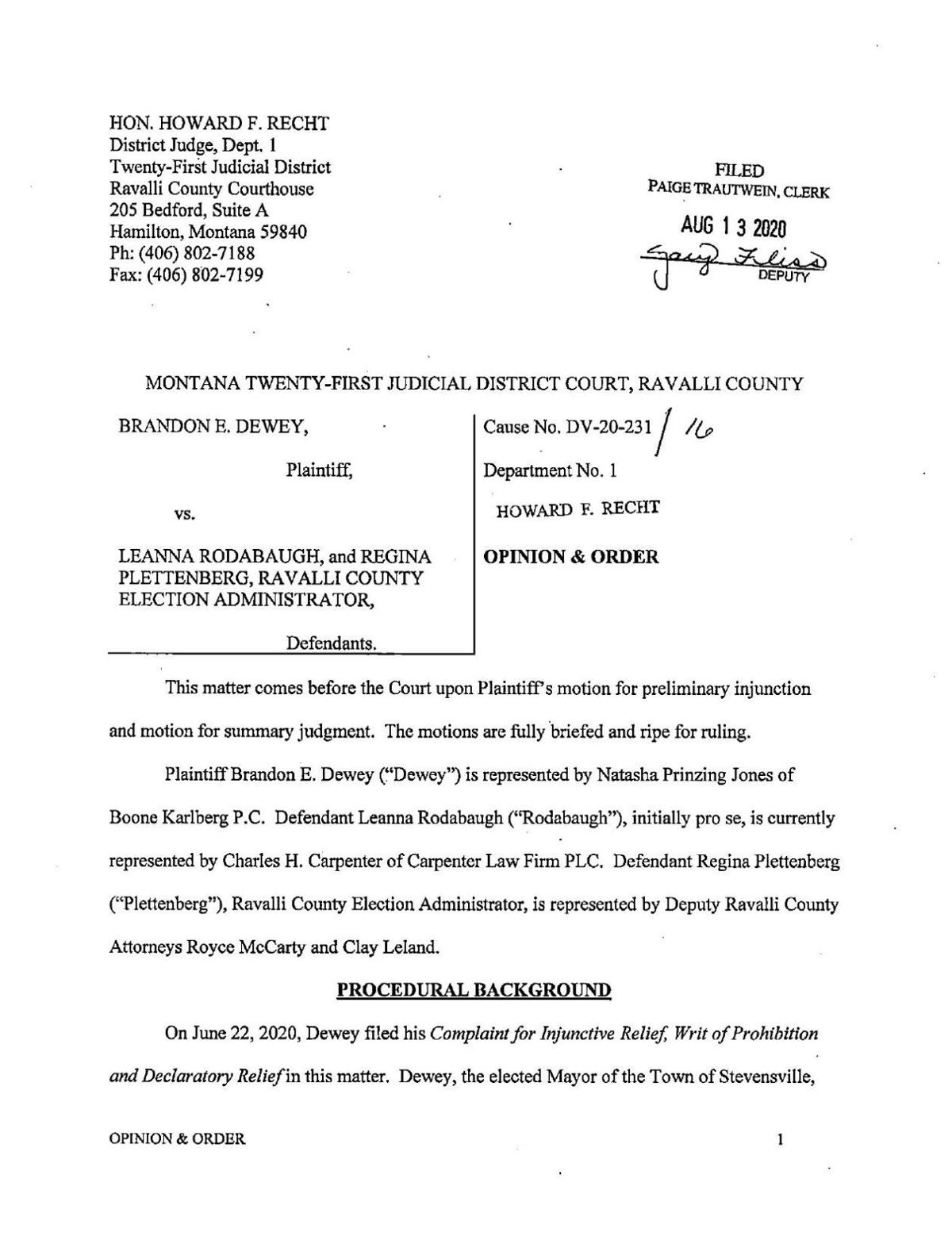 “By soliciting a quote from First Call outside the channel utilized by the Town Council, by receiving and opening the quote in private, and by proceeding to execute the First Call Contract on his own without notice or approval from the Town Council and outside of a public meeting, Dewey acted outside the law and without legal authority,” Recht wrote.

Stevensville resident Leanna Rodabaugh filed the petition for a recall election against Dewey that alleged the mayor had violated his oath of office by signing a contract for IT services last December that wasn’t authorized by the Town Council or reviewed by the city attorney.

In June, Dewey filed suit against Rodabaugh and Plettenberg seeking to stop the recall election. He contended the petition’s claims were false.

Recht granted a temporary restraining order so the matter could be argued in court.

The recall election was originally set for Aug. 4, but the court challenge nullified that date.

At issue was a $78,000 IT non-binding three-year contract approved by Dewey.

Dewey claimed the Town Council delegated its authority to approve the contract after approving the 2020 budget that included eight separate line items for IT services and approving a $4,200 on-boarding fee at its January 2020 meeting.

Dewey contended that Rodabaugh’s statements in the recall petition “were deliberately and recklessly false and misleading and contrary to Montana law.”

Despite extensive briefing on the matter, Recht said Dewey didn’t attempt to explain how any citizen of Stevensville would have been able to exercise their constitutional right to participate and know about the First Call contract when the contract was not made public “until three months after the deed had been done.”

In a prepared statement, Dewey called Recht’s order disappointing and said he disagreed with its conclusion.

“The judge appears to overlook many vital facts that we presented that speak to the Town Council’s intentional delegation of authority within the Town’s purchasing policy,” Dewey wrote.

“The administration and I have always acted with the community’s best interests in mind, and the decision to contract with First Call Computer Solutions was no exception,” the statement read. “The need for managed IT services was not disputed by either party in this case, which speaks to our intent to provide responsible and efficient everyday services that our residents rely on and can count on us to deliver.

“The agreement was executed in good faith and based on our interpretation and understanding of the relevant policies. Those understandings and interpretations, coupled with the opinion of the City Attorney, gave us no indication that a violation would occur. According to the judge, we got it wrong this time. Our commitment to the community and to do better has not changed.

“Ultimately, it is the voters who will get to decide whether the dedication I have demonstrated to this community is enough to forgive an oversight that hinges on a grey-area of law where legal experts have landed on different conclusions,” Dewey wrote.

Rodabaugh said she and others who collected signatures for the recall election were pleased with the court decision.

“As a citizen of our Town of Stevensville, I am strengthened by the ruling made by Judge Recht regarding Mayor Dewey's lawsuit and restraining order to prevent the recall of the Mayor,” Rodabaugh wrote. “This ruling shows the prevalence of justice for the electors of Stevensville and an enforcement of the process of participation by our citizens, a basic right guaranteed by the Constitution of the State of Montana. It is an awesome responsibility to carry forth this right and use it responsibly for the citizens of our town. Our citizens will now be able to choose the direction of their future.

“We were really happy down here to hear the news,” Rodabaugh said Friday. “When I went to tell one of the people who has worked on this, he reached into the refrigerator and gave me a bottle of champagne. … There were a lot of people who worked really hard to get this done. Everyone did more than I did.”

Victor couple's Sunday hike turned into a firefighting effort that kept an abandoned campfire from spreading in the Glen Lake area.

While there won’t be a fair in Ravalli County this year, all of the hard work put in by 4-H and FFA members hasn’t been forgotten.

A Stevensville man was arrested Sunday morning for felony DUI after his pickup crashed into a rock landscape mezzanine at the Earth & Wood business south of Stevensville.

An Alabama man was charged with driving drunk on Hamilton’s Golf Course Road with a 12-year-old boy his vehicle.

On the day that 60-year-old Joseph McNamara learned that he would likely die in prison, the parents of the 9-year-old boy that he struck and killed last July told about the life sentences they are already serving.

Quick action from both the air and the ground has kept a lid on eight lightning-caused fires on the Bitterroot National Forest this week.