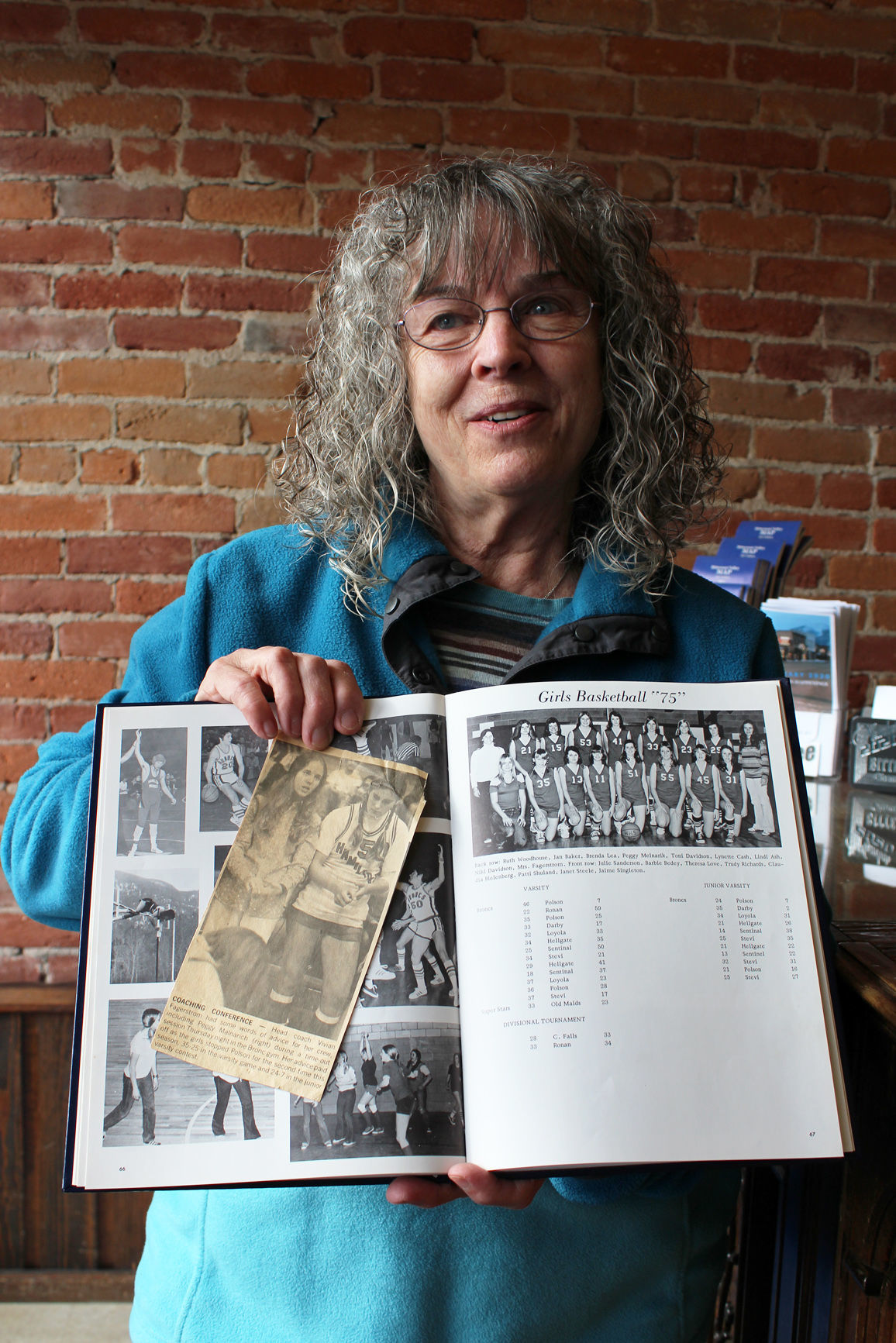 Vivian Fagerstrom was the first girls basketball coach for Hamilton High School in 1974. She is holding the yearbook from that year that shows her strong team of athletes. 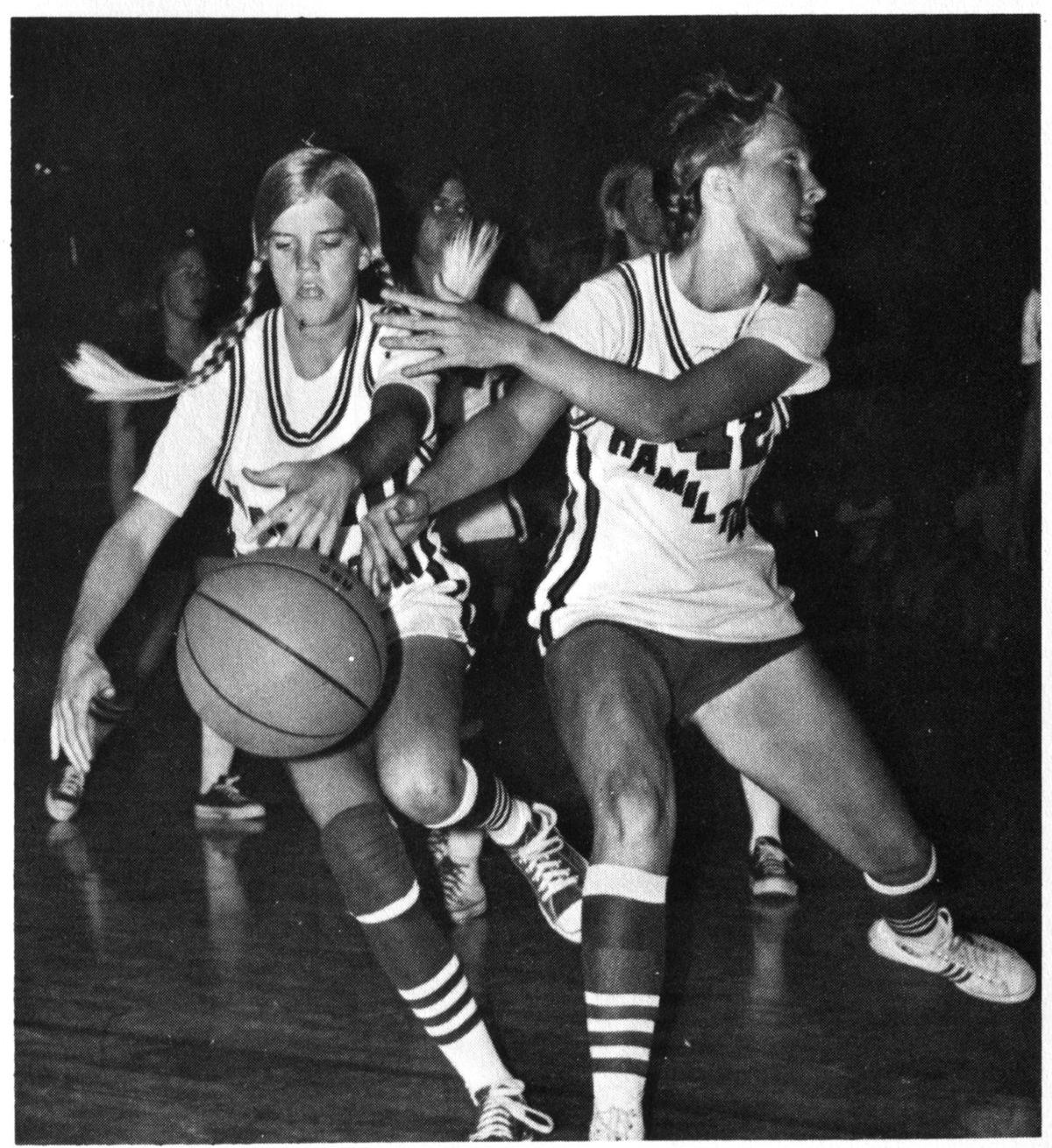 Lindi Ash (left) playing on the Hamilton Girls Basketball team in 1974. “We were competitive and it gave us something to do,” Gueldenhaar said. 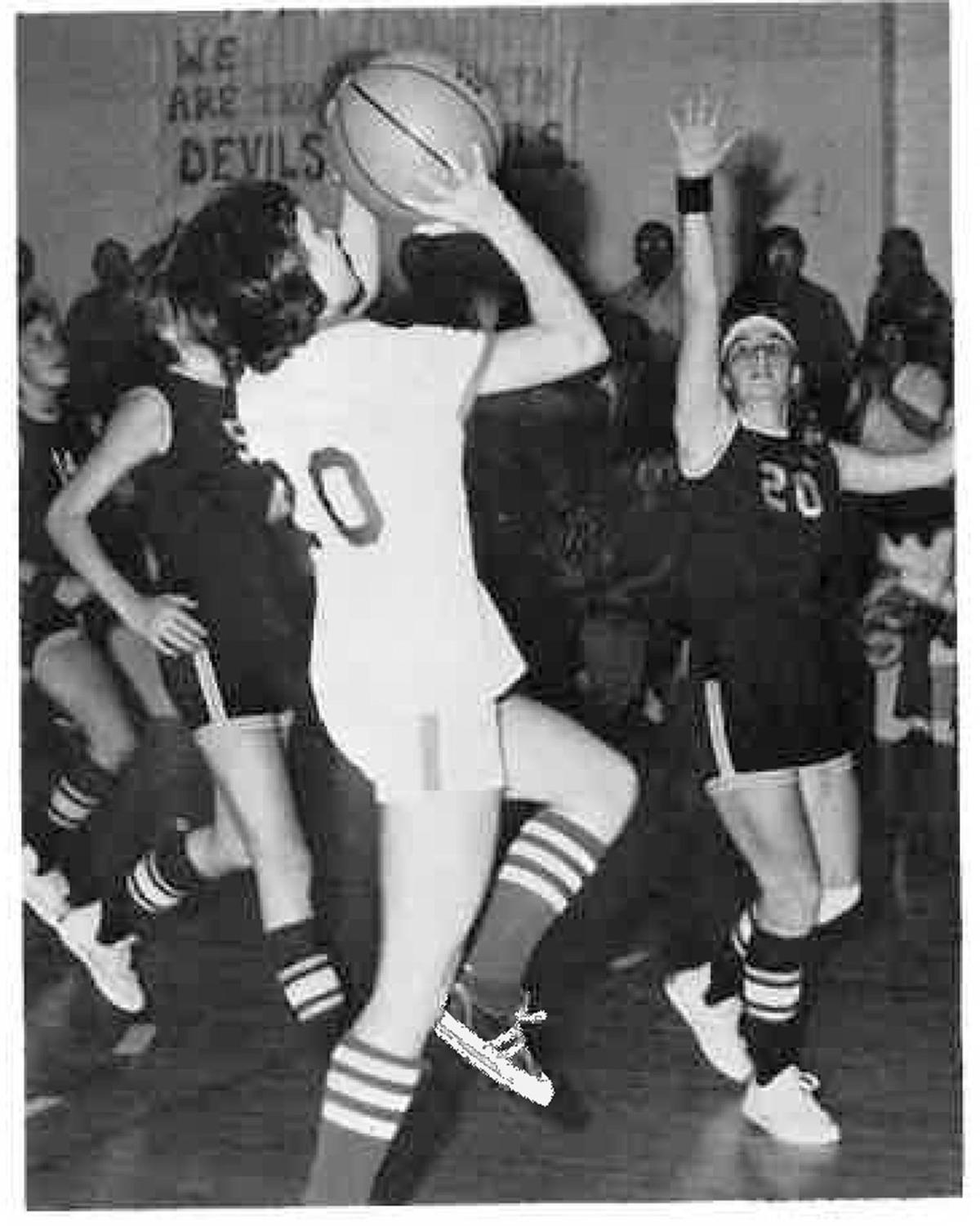 In 1974 the Corvallis Girls Basketball team was coached by Wendell Griffin who started by teaching the basics.

Girls basketball restarted in 1974 after an over 40-year break in the Bitterroot Valley.

Most still live in the valley.

Bronc coach Vivian Fagerstrom said it “was a fun and wonderful experience.”

“Nicki Shonkwiler and Lindi Ash were seniors on my team and probably the reason it started,” she said.

Fagerstrom’s degrees were in English and Spanish and said she felt she was hired to coach because the year before she had taught physical education class and coached at in Rift Valley Academy in Kenya, Africa.

“Back in 1974 when Hamilton High School hired me, none of the men wanted that challenge,” Fagerstrom said. “Back then, in order to take a teaching position, all teachers had to accept whatever extra-curricular was offered to them. My qualifications weren’t very good but I loved the game and I loved coaching the girls. They were an awesome team.”

Fagerstrom credited the then pastor of Christ Bible Church for guiding her.

“Dave Kennedy was the key, actually did the coaching of the team and called the plays,” she said. “It was a fun year of working together and we did have some success. I also have to give credit to Dale Barry who was the boys basketball coach. He gave me his plays to use, a lot of insight and many coaching tips. The next year, Lloyd Clark was coach of the team.”

David Kennedy, now living in Arizona, said that in 1974 he “coached from the shadows” as school rules at that time allowed only employees to coach.

“A couple of the girls were in our church at the time and it was the natural thing to do,” he said. “It was good for girls to play basketball and they played well. Lindi Ash and Nicki Shonkwiler were standouts.”

Lindi Ash Gueldenhaar said she was a tomboy and played all the sports, just not in formal competition.

“We were competitive and it gave us something to do,” she said.

Her aunt, Bertie Ash, played on the last Bronc girls’ basketball team that competed in the 1930s.

“They had two forwards, two guards and a center and they only played half court,” Gueldenharr said. “You only played defense or offense because they didn’t think girls could physically run.”

Victor varsity coach Mary Rodriguez, a 1969 Corvallis graduate, was in her first year of teaching at Victor.

“When I was a kid, the only time girls could play basketball was in gym class,” Rodriguez said. “The only way we could play competitively was during the half time of the boys games. Even in high school, the only organized thing that girls had was cheerleading. We did have some track events and as seniors four of us went to state track at Dillon.”

She said Title IX has “been a great thing for girls” and sees the continuing value with scheduling games, gym time for practices and an equal number of sports.

Rodriguez said she was friends, neighbors and schoolmates with the then Corvallis Coach Wendell Griffin, whose son, Richard,  is currently the Hamilton Girl's Basketball Coach.

“It’s interesting how we’ve stuck around,” she said. “The girls basketball thing was a great experience.”

“[Girls basketball] was an awesome opportunity,” he said. “Before that they were cheerleaders or in the pep club. Now after all these years it is spread out even. Title IX has given girls an equal shake with boys.”

In 1974, Corvallis had 25 girls come out for the team and Griffin said they were athletic.

“Some had played with their brothers,” he said. “My sister, Lorna Griffin, Cheryl Tintzman and others were good athletes. We won more games than we lost that first year. We won most of our games, averaging 18 points a game.”

He credited low-scoring games with how the girls were taught.

“Dribble the ball, stop, pivot, look for someone to pass the ball to,” Griffin said. “It was basically starting from scratch.”

He said the first year the team had 12 games and no tournament play.

“That first year of basketball at Corvallis we weren’t in a league yet, we just picked up games,” he said. “The next year we were able to get into tournaments.”

Griffin said that girls basketball was stopped after WWII due to worries that if girls got too much exercise they wouldn’t be able to reproduce.

“That went for 30 years or so, like in track for a long time they limited the number of events that girls could do because they didn’t want them to be running too much,” he said. “Which is hard to believe. There has been a lot of good changes for girls over the years, it’s been a hard fight for them.”

“We didn’t like to lose so we worked hard, the competitive spirit came through,” she said. “We had to learn it all. We were seniors in high school so if you can imagine not playing until you were a senior. Our poor parents must have just been like, ‘oh, my gosh, do I have to watch another game?’ because now kids start at age 5 and know how to dribble.”

She recalls not having a three-point line and having to shoot 50 free throws every night.

“Poor Wendell, he kept saying ‘these are freebees if you get to the line, we can at least make a point,’” Tintzman said. “We were good back in those days, I think we held our own. We scored six points in one game.”

She remembers traveling on a team bus and in private cars for competition in distant schools like Phillipsburg, Drummond, Plains, Thompson Falls, Libby, Troy and Eureka.

Darby girls basketball coach Lee Foss said the school had burned down so the team played in the LDS church.

“We had enough girls for an A squad and a junior varsity squad,” Foss said. “I was coaching the boys JV and I took on the girls for the fun of it, and it was fun. When they opened up basketball it allowed girls to get involved in extracurricular activities. It just opened up a whole new world for girls.”

The Corvallis School Board is asking community members for their opinion via a Corvallis School District Bond Scope Survey. The survey can be mailed in or completed online at: www.surveymonkey.com/r/CorvallisBond. The deadline is 3 p.m. on Friday, Feb. 21.

Riding through the western states on an ambitious tour schedule, the Steep Canyon Rangers will deliver bluegrass sensations to the Hamilton stage on Friday night as part of the sold-out series presented by the Bitterroot Performing Arts Series.

The Western B Basketball Divisional Tournament is coming to town. Enjoy some fast hoop action next week as Hamilton High School is hosting both the Boys and Girls, Feb.27-29.

Vivian Fagerstrom was the first girls basketball coach for Hamilton High School in 1974. She is holding the yearbook from that year that shows her strong team of athletes.

Lindi Ash (left) playing on the Hamilton Girls Basketball team in 1974. “We were competitive and it gave us something to do,” Gueldenhaar said.

In 1974 the Corvallis Girls Basketball team was coached by Wendell Griffin who started by teaching the basics.