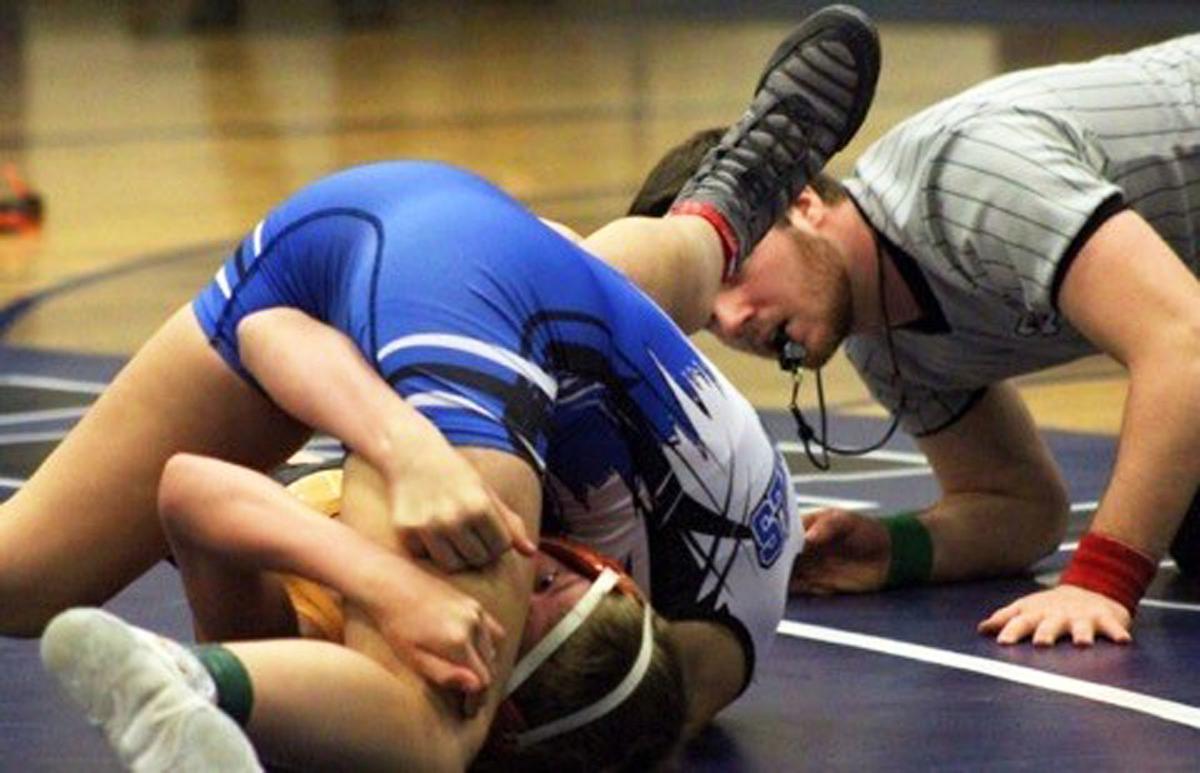 Corvallis High School Blue Devil Wrestler Kiera Davis (on top) is a freshman and only in her second year of wrestling. She said she always wanted to wrestle, loves it and has fun with it. 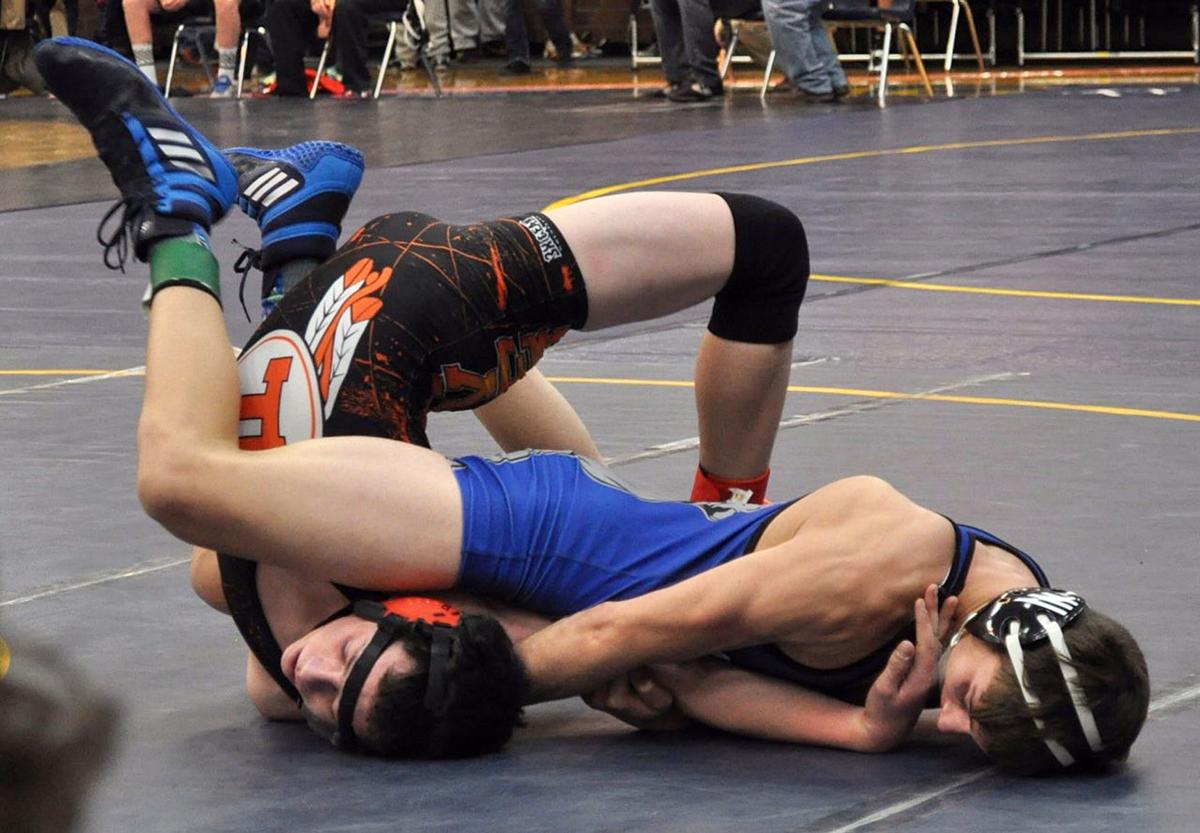 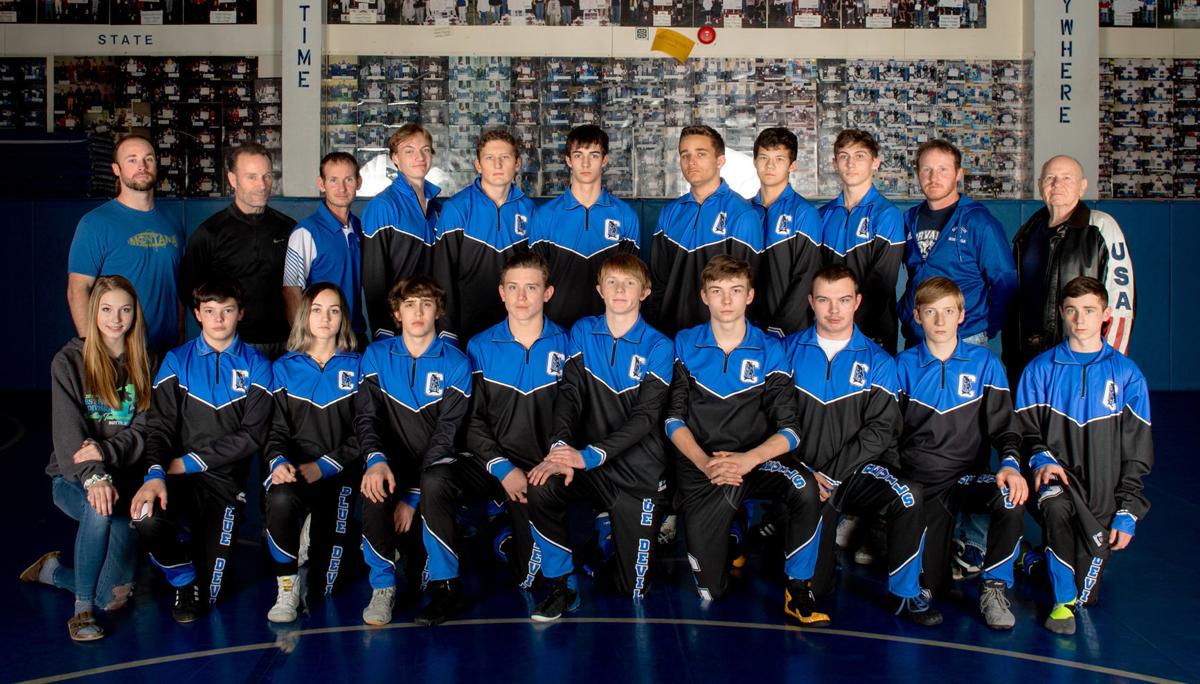 Corvallis High School Head Wrestling Coach Matt Davis has a son and daughter on his team this year.

Someday in the future, Davis would like to see girls wrestling become its own sport.

The Montana High School Association will be considering that idea at its meeting next Monday, Jan. 20.

Matt Davis has been coaching since he graduated from Corvallis where he earned two state championships in 1998 and 1997, in the 105 pound weight class.

Kiera Davis is a freshman on the Blue Devil team. She started wrestling in eighth grade, spent the summer wrestling in other organizations but has only wrestled one girl so far this MHSA sanctioned season. Usually, she wrestles in her weight class against boys.

Kiera Davis said that growing up in a wrestling family and with her dad as coach, she wanted to wrestle since she was a little girl.

“I wouldn’t let her,” Matt Davis said. “She asked every year and she always came to watch her brother. She always wanted to do it.”

He said his reasons for not allowing his daughter to wrestle include perseverance.

“Girls develop faster than boys and are more mature,” he said. “They have a lot of success when they are younger in third, fourth and fifth grade, but then they start to fall behind as the boys start to mature.”

He said that often girls quit wrestling in high school. He said his daughter has a “very dominate mindset” so he made her wait.

“I figured she’d want to wrestle in high school and I didn’t want her to be frustrated,” he said. “She’s been around it her whole life and it isn’t new to her.”

Kiera Davis agreed that she always wanted to wrestle.

“But my parents said no,” she said. “My eighth-grade year they finally said yes. They didn’t know if I was going to stick with it but I love it. Nobody makes me do it. I have fun with it.”

After high school she wants to go to Stanford University and play soccer.

She was a starter on the CHS soccer team this fall and wants to study to become a physical therapist.

“I like to be around sports, I like to be able to help with them and I love participating in sports,” she said. “Stanford has always been a dream.”

She said she hasn’t experienced any sexist remarks.

“I’m sure some of the guys that have to wrestle me are dreading wrestling a girl, but nobody really thinks about it, you more just go out there, do your thing and be done,” she said. “We try our best as girls too.”

“It is more than just the dual, it is life skills,” he said. “It is a foundation for discipline and teamwork.”

He is in the 145 pound category, undefeated and ranked #2.

“It is my senior season,” he said. “Last year I didn’t get where I wanted to be so this year is the year to do it, I’m going out to win. Being undefeated is cool. I’m not all boastful about it but am relaxed about it.”

He said there is a lot of mental preparation and self-talk.

“Basically a wrestling match comes down to who wants it more and who trained harder,” Triston Davis said. “I’ve trained 14 years and now is my time to get something done. I’ve been wrestling state champions for years and this year I’m going to get it done.”

Triston Davis said he appreciates his dad as coach.

“I’ve always wrestled under my family, we have a history of wrestling in our family,” he said. “My uncles and cousins are state champions in Montana. I felt a little pressure my freshman year but my dad lets other coaches’ step in and coach me during a match.”

Triston is the team captain and said he has the desire to win a state championship.

“That’s what I’m going for and I want other kids to feel like let’s get it done,” he said. “I want it more and it is a chain effect.”

Triston doesn’t feel the call to a Corvallis wrestling legacy, he has been accepted to lineman school in Boise, Idaho. He said that having girls wrestling as a Montana High School Association sanctioned event will happen and is a good thing.

“Girls should wrestle,” Triston Davis said. “I do a lot of USAW wrestling in the summer and they have girls wrestling. It is cool to watch as some of them are really, really good. It is not just a guy’s sport, it is one of the hardest sports in the world.”

“I think more girls will come out because they are afraid to wrestle boys,” Matt Davis said. “I think it would be a good move in the right direction for us to have it.”

He said the University of Providence in Great Falls has a strong girls wrestling team and that there are many scholarship opportunities for girls wrestlers.

The MHSA proposal is to implement girls Folkstyle wrestling on a two-year pilot program. If approved, girls will participate in weight classes of 103, 113, 126, 138, 152, 170 and 205. Girls Divisional tournaments will not be held as all girls will qualify for state during the two-year pilot program and participants will be seeded at state (like track and boys wrestling).

To keep sports equal, boys’ powerlifting would be added as a spring sport.

Schools would have the option of adopting these sports.

The Ballet Beyond Borders event was presented by the Rocky Mountain Ballet Theatre as a global cultural exchange and way to examine and encourage “The Role of Arts in Global Communication.”

Corvallis High School Blue Devil Wrestler Kiera Davis (on top) is a freshman and only in her second year of wrestling. She said she always wanted to wrestle, loves it and has fun with it.