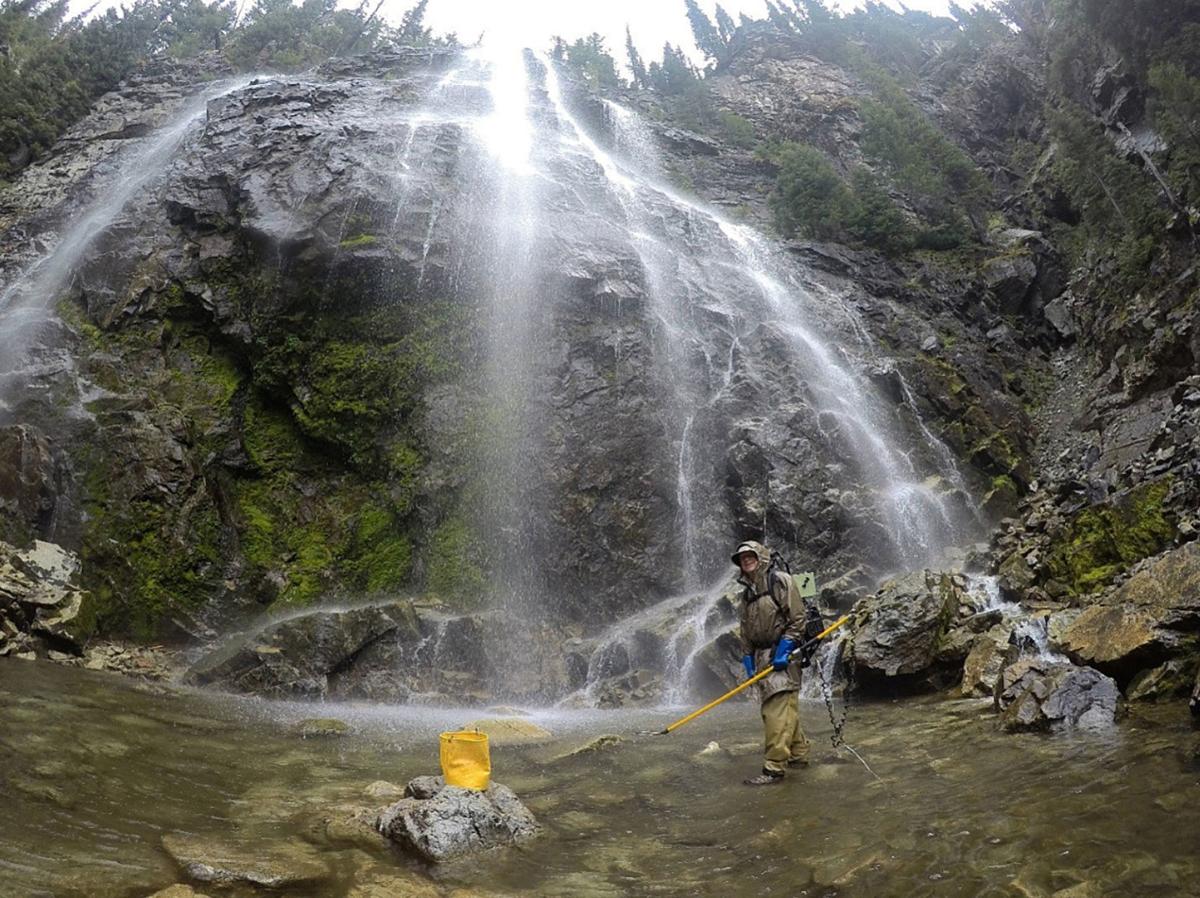 Chris Clancy, in 2018, electrofishing the large pool at the base of Overwhich Falls to move them 1,000 feet downstream for their safety. 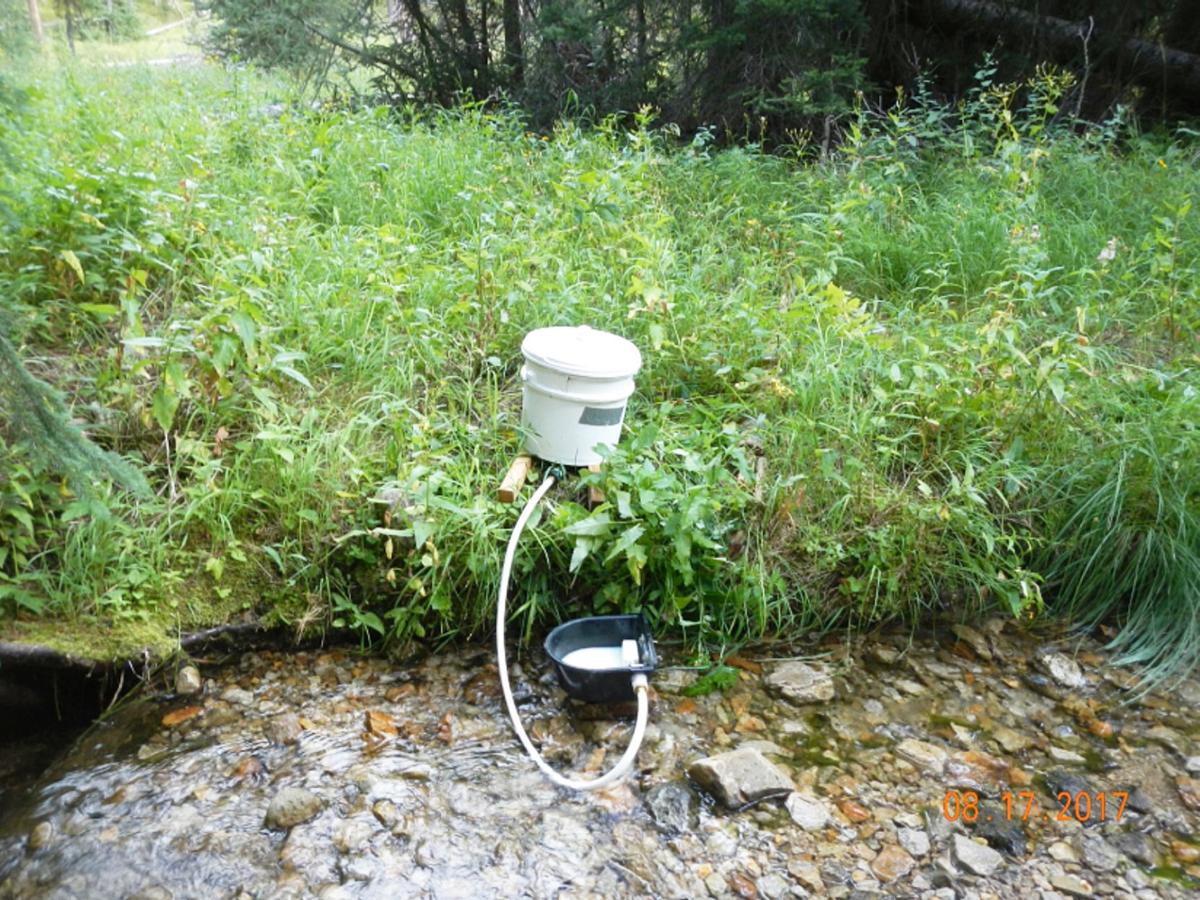 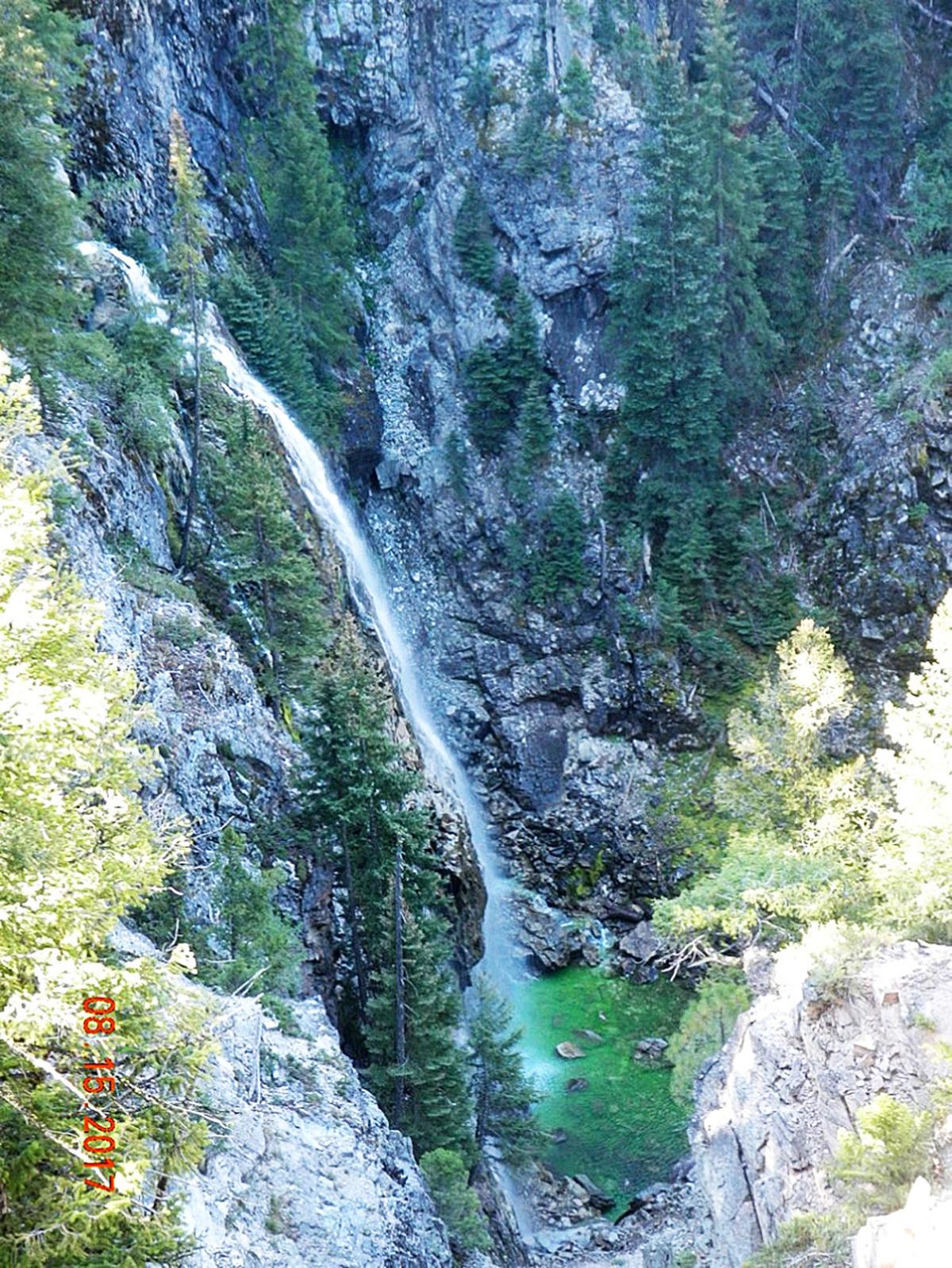 Overwhich Falls with a green non-toxic dye (similar to dye used to trace leaks in plumbing or sewage systems) that helped the team determine drip station placement on August 15, 2017.

The Bitterroot National Forest and Montana Fish, Wildlife, and Parks will be implementing a fish removal project on the West Fork Ranger District in the Overwhich Creek drainage upstream of Overwhich Falls August 12 – 22.

Overwhich Creek and its tributaries upstream of Overwhich Falls will be treated with rotenone to remove non-native Yellowstone cutthroat trout.

This will be the third consecutive year of treatment. The area was also treated in August, 2017 and 2018. It typically takes three years of treatment to remove all of the fish.

Mike Jakober, fisheries biologist, has worked on the Bitterroot National Forest since 1991 and said that planning for the project began in 2014.

This is the third year and final year of the project.

The West Fork Bitterroot River drainage above Painted Rocks Dam is one of the largest areas that still contains genetically pure Westslope cutthroat trout. The lone exception is the portion of Overwhich Creek above Overwhich Falls, where Yellowstone cutthroat trout pose a long term risk to the genetic purity of the Westslope populations below the falls.

“What’s happening is that over time some of the Yellowstones are dribbling down over the falls and interbreeding with the genetically pure Westslope that reside below the falls,” Jakober said. “The result is that and we’re getting some genetically hybridized cutthroat trout in in the upper reaches of Overwhich Creek. It’s a long-term threat to the genetic purity of the Westslope cutthroat population above Painted Rocks Dam.”

“Back then the fish would have been transported to Capri Lake on mules and as the pack string was walking into the lake they probably looked over at the meandering stream next to the trail (Overwhich Creek) and decided to put some fish in there,” Jakober said. “Historically, all of the Overwhich Creek drainage above Overwhich Falls was likely fishless.”

Jakober said that a secondary benefit of the project would be the amphibian populations above the falls. The area above the falls is potentially a “stronghold for amphibians.”

“Particularly tailed frogs, Columbia spotted frogs, long-toed salamanders and western toads, so getting the fish out of the area would create a refuge for those species in the future,” Jakober said. “The fish do prey on them and it would be nice to have a little piece of the world where the amphibians can still exist in their historic condition without having to deal with getting eaten by introduced fish. Amphibians are in trouble in many parts of the world.”

He said rotenone has been used by native peoples in the tropics for hundreds of years. It is an organic compound made from the root of legumes. Grinding the roots into a powder, drying them then adding water produces a chemical that blocks oxygen uptake of gill-breathing organisms.

“It kills any gill-breathing organism so native peoples used rotenone to harvest fish” Jakober said. “It has been used a lot throughout the western United States in the last 30-40 years. The state of Montana has done at least 35 projects in the last two decades using this chemical on fish removal projects.”

This is the first project done in the Bitterroot and the third year of the treatment application. Jakober estimated the first year was successful in killing 90% of the fish.

“In 2018, we knocked the survivors pretty good but we want to make sure all the fish are gone, hence the third year of treatment,” he said.

The 2018 team consisted of Jakober, brothers Chris and Pat Clancey of Montana Fish, Wildlife and Park and representatives from the U.S. Fish and Wildlife Service, the Bureau of Land Management and Montana State University.

As a safety precaution, before rotenone is applied above the falls, fish (mostly Westslope cutthroat trout and some Bull trout) are removed from the first 1,000 feet of Overwhich Creek below the falls and moved further downstream, beyond the point where any residual rotenone going over the falls could harm them.

Before applying the rotenone, a nontoxic dye (similar to dye used to trace leaks in plumbing or sewage systems) is used to determine stream flow distances and times. This tells the biologists where to place the drip stations that slowly drip rotenone in the stream.

The rotenone chemical is slowly dripped into the stream over a four-hour period from 20 drip stations about an hour (stream flow time) apart. The rotenone is diluted with water and has a milky white appearance.

The project area is northwest of the Lost Trail Ski Area, above 7,000 feet and the streams are small.

Jakober said that in fish removal projects it is difficult to determine whether a 100% kill of fish has occurred. In 2020, the Forest Service and Montana Fish, Wildlife and Parks biologists will use a new technology called eDNA that tests water samples and is very precise at detecting fish DNA.

“You’ll get a positive or negative and that will tell you if fish are present in a water body,” Jakober said. “We will take eDNA samples from various places above Overwhich Falls to see if any fish have survived.”

The plan is to leave all of the streams above the falls fishless, but plan B, if some fish still remain alive above the falls, is to stock the area with a pure strain of Westslope cutthroat and genetically swamp the few Yellowstone cutthroat that are still present above the falls.

Jakober said the project had been on the drawing board for about five years.

In 2014, discussion started between the Forest Service and Fish, Wildlife and Parks (and then biologist Chris Clancy). They did groundwork and analysis in 2015 and 2016, completed an Environmental Assessment in 2017 and began implementing in August of that year.

Stay in touch with the Bitterroot National Forest through www.facebook.com/DiscoverBitterrootNF and www.twitter.com/BitterrootNF.

Corvallis Quilter Susan Paceley has been selected to compete with her quilt, 'Make Our Garden Grow,' at the American Quilter’s Society Quilt W…

Chris Clancy, in 2018, electrofishing the large pool at the base of Overwhich Falls to move them 1,000 feet downstream for their safety.

Overwhich Falls with a green non-toxic dye (similar to dye used to trace leaks in plumbing or sewage systems) that helped the team determine drip station placement on August 15, 2017.