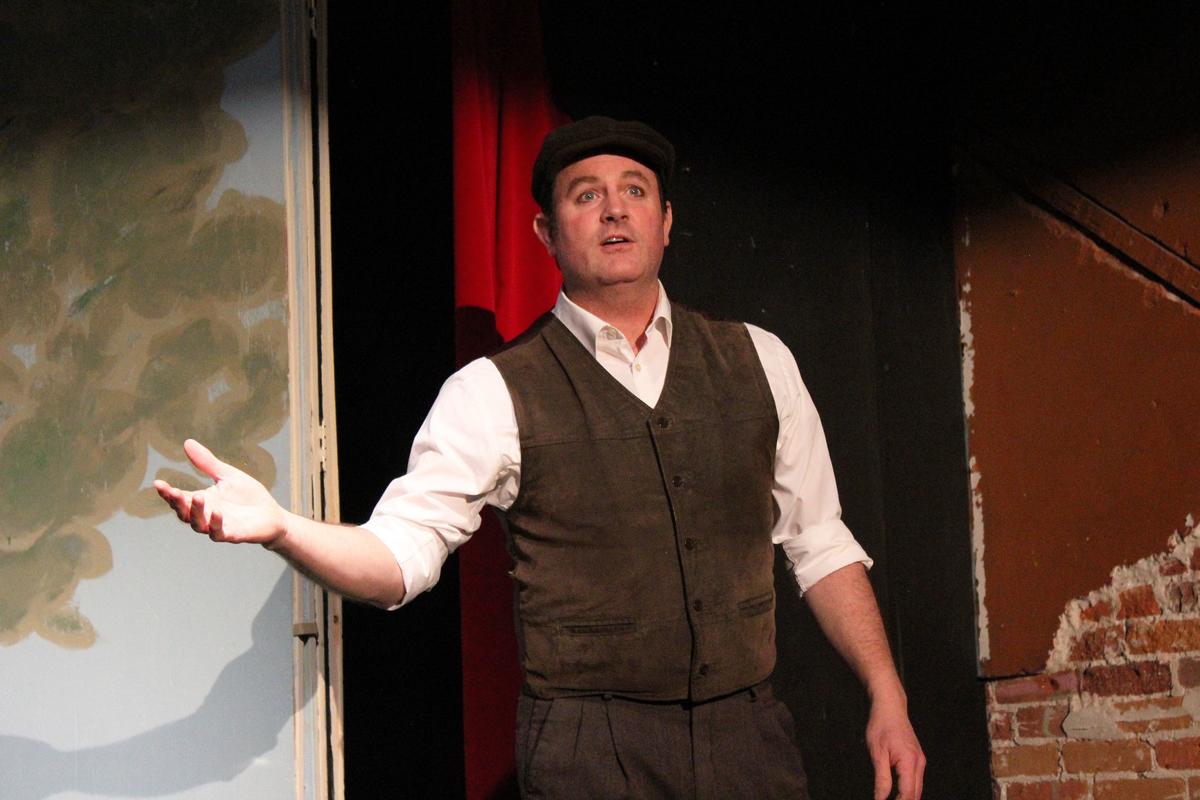 Richard Thomas portrays Bert as a happy helper to Mary Poppins. “I like to think he has a little magic himself,” Thomas said. 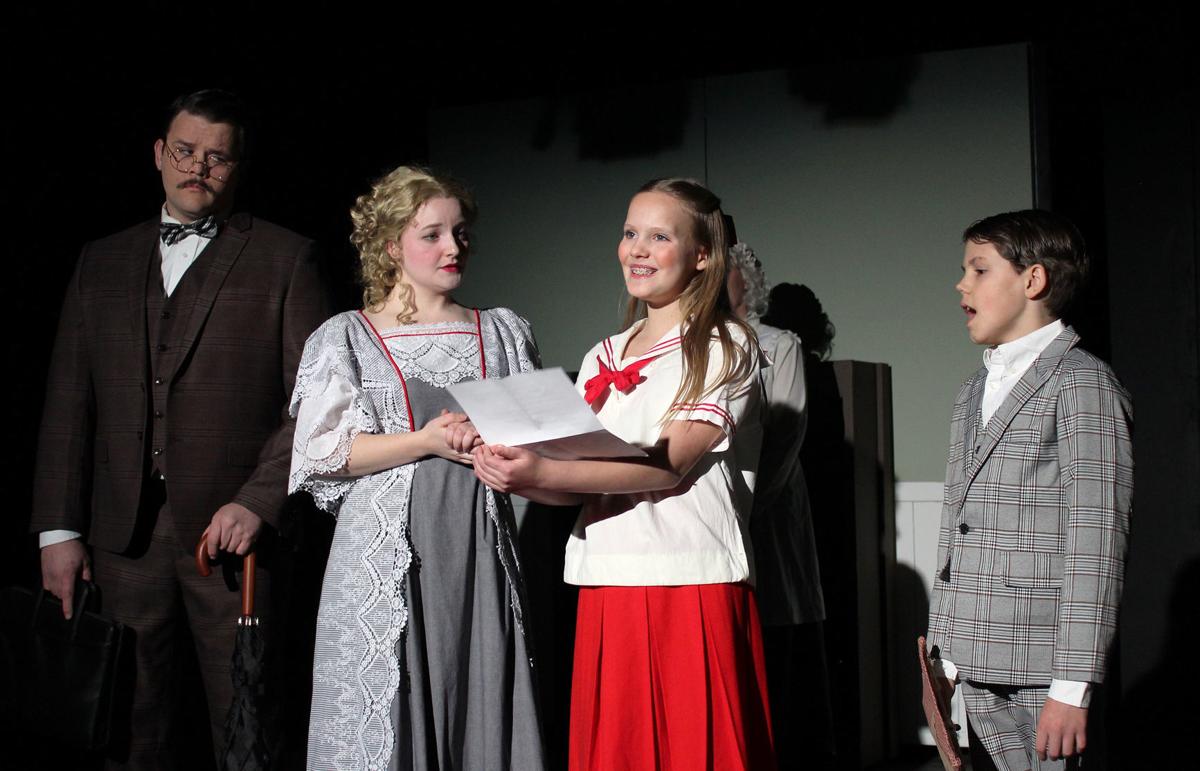 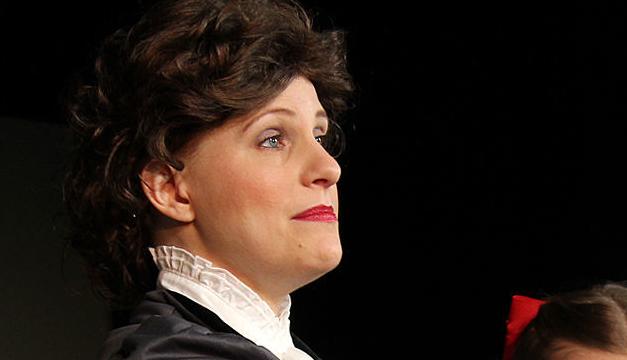 Mary Poppins, practically perfect in every way, shows that measuring tape pronouncement to her charges, Jane and Michael Banks. The Hamilton Players musical production starts at 8 p.m. on Friday, Feb. 14.

The Hamilton Playhouse is producing the beloved “Mary Poppins.”

Director Denise Rose said Mary Poppins is different from every show she has directed.

“There are so many moving pieces — music, choreography, blocking, dialogue, magic props, special effects. It is a huge challenge to juggle it all,” Rose said. “But once again, I am blessed with an absolutely stellar cast; not only are they talented and fun to work with, but they roll with all the little crazy bits and pieces that I keep throwing at them.”

Rose said the crew has developed creative solutions to some big problems.

“The music is too epic to pare down the orchestration to a small pit band, so we are using a special recording of a full orchestra playing the score which is amazing and magical but creates its own interesting set of challenges,” she said. “We also have a lot of rolling set changes and are trying out a new staging configuration for the show. So far, it is working brilliantly, but again, it was a new experience to get used to.”

While the Hamilton Playhouse production is partially based on the Disney movie starring Julie Andrews and Dick Vandyke, there are some new twists and turns including new characters and more details on familiar ones.

The general plot is that a prosperous family needs a new nanny. Mary Poppins arrives to bring adventure and a sunny disposition to the entire family. Whether through magic or care there are changes of heart, especially for the children’s preoccupied parents.

“Overall, it is going to be a really fun show,” Rose said. “Tickets are selling like crazy, so I highly recommend that people get theirs asap. It is a full-length Broadway musical, so it will be a late night for the kiddoes but it will be worth it.”

Tasha Fain said she wanted the part of Mary Poppins because it is an iconic role.

“It wasn’t a show I grew up with that much and so I was coming to it with fresh eyes,” she said. “The musical is quite different than the movie which I do like. This had more developed characters, a larger character arch and Mary Poppins doesn’t change but is a catalyst for change.”

New songs, exciting magic and the opportunity to work on stage with her daughter compelled her to audition.

“This is my first big role and it is a big part,” she said. “I like the cake prop it is really fun. I’ve listened to Mary Poppins a lot.”

“People already love the show and will enjoy the new changes,” she said. “It will be interesting for them to get further insight into the Marry Poppins story.”

“As long as I remember to keep smiling,” Thomas said. “Bert is just a happy guy. He’s very insightful and works with Mary Poppins a bit. I like to think he has a little magic himself.”

This is Thomas’s sixth musical production at the Hamilton Playhouse.

“Guys that have my skill set of acting, singing and dancing are few and far between, so I get called,” he said. “The nice thing is this is my first role where I’m not playing an unscrupulous character.”

His favorite parts are the songs Step In Time (when he is a chimney sweep) and Supercalifragilisticexpialidocious.

Reagan Farley said he likes to play the part of George Banks “because he gets a killer mustache.”

“I didn’t know anything about Mary Poppins before auditioning so this has been a big learning curve,” Farley said. “I watched the movie after auditions and learned about George Banks.”

This is Farley’s seventh show with the Hamilton players.

“It has been a neat role because this has the biggest character arch,” he said. “Going from status quo to a little bit of a high, then a complete crash then the rediscovery of family and what is really important. It has been fun to develop and an opportunity to show off more acting abilities.”

Farley said the musical doesn’t parallel the movie but is similar.

“Learning the London and British accent is fun,” Farley said. “This is my third show with this accent. Being in Mary Poppins has been a delight.”

Julie Fryberger said the goal with her make up as the Bird Woman was to make her indistinguishable.

“The best part of any musical is hearing the audience sing the songs as they are leaving,” she said. “I like singing the duet with Tasha, we don’t get to sing with each other very often.”

Quick changes, fold-out flats and creative set pieces keep the actors on their toes. There is also a special appearance by Max Naidl, Natalie Naidl and the Groovz Dance Studio advanced tappers.

Darby High School Senior Rylee Nelson is leaving her mark of a passion for art by painting a large tiger face on the north side of the main entrance.

The Hamilton Lady Bronc basketball team is wrapping up their regular season play with a focus of competing well and earning a first or second seed ride to divisional playoffs.

Medical professionals say it is not too late to vaccinate, even if you have had the flu this year. On Monday, Feb. 24, the MDMH Flu Clinic will be open 8 a.m. to 5 p.m. at the Bitterroot Physicians Clinic. Walk-ins are welcome or call to schedule an appointment.

Richard Thomas portrays Bert as a happy helper to Mary Poppins. “I like to think he has a little magic himself,” Thomas said.

Mary Poppins, practically perfect in every way, shows that measuring tape pronouncement to her charges, Jane and Michael Banks. The Hamilton Players musical production starts at 8 p.m. on Friday, Feb. 14.