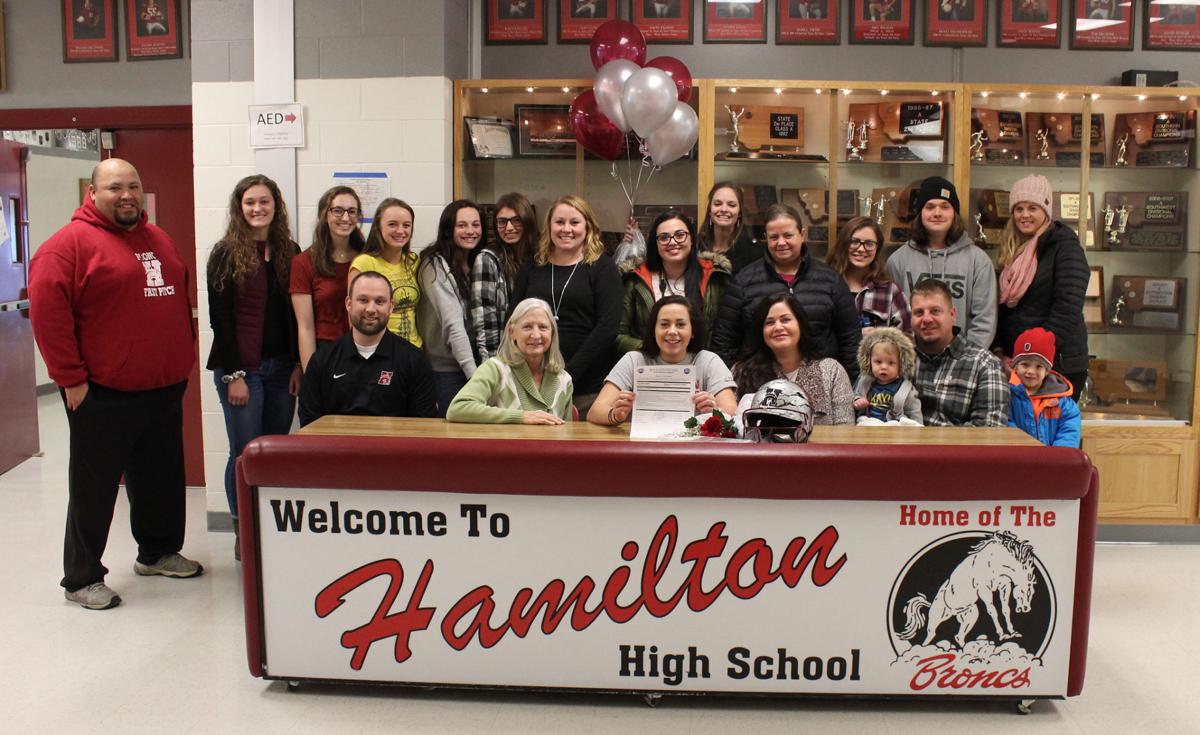 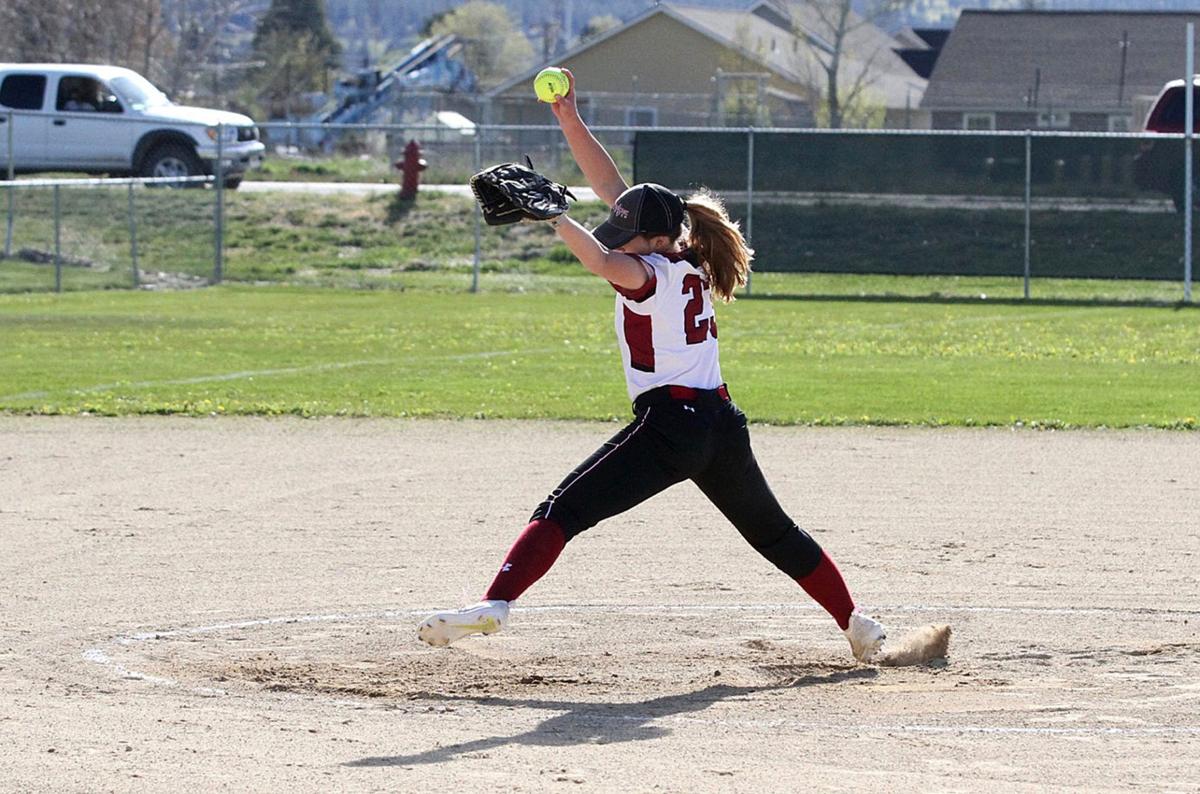 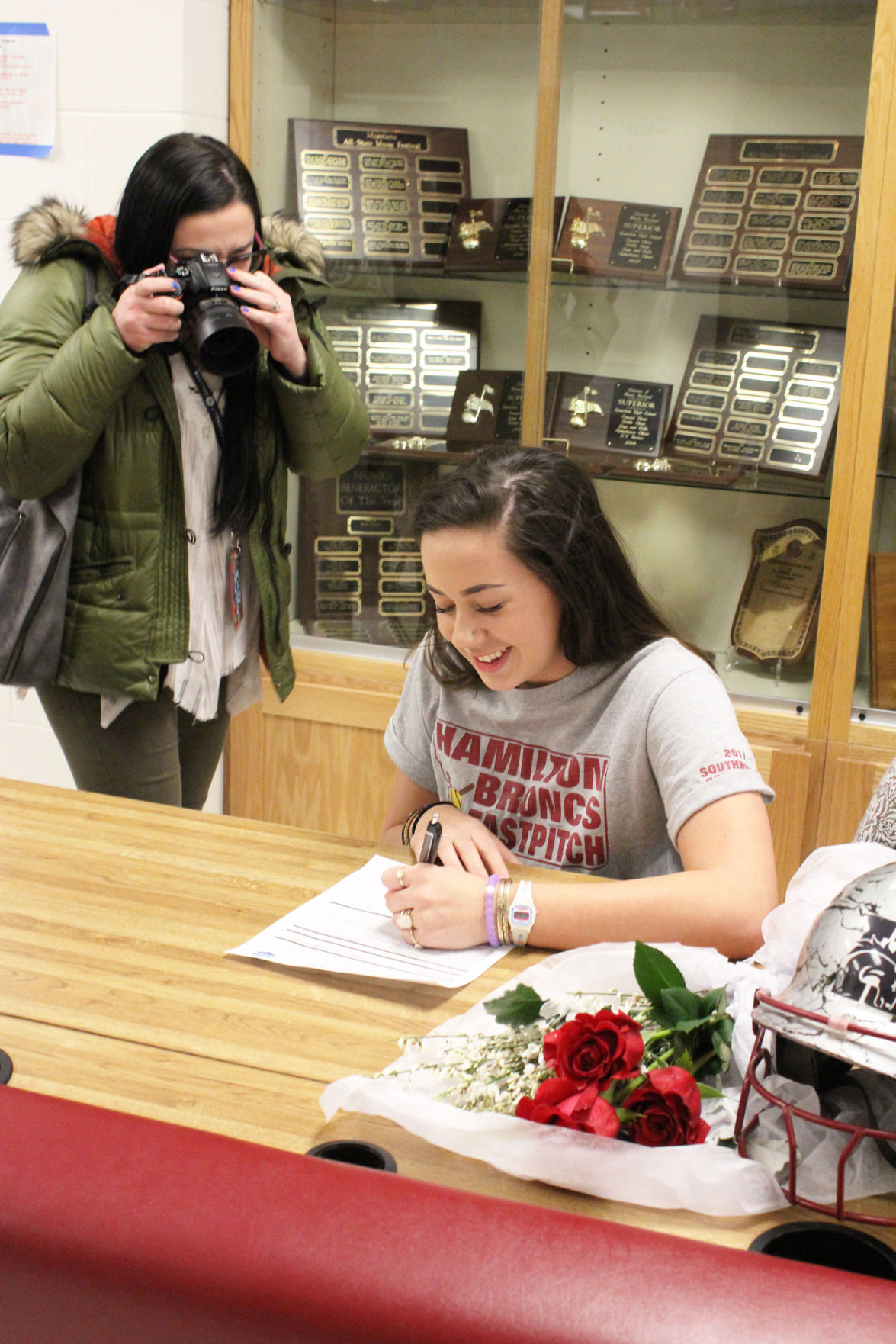 Big sister Alana Johnson proudly takes a photo of Sky Lopez as she signs her letter of intent to play softball and study at Dawson Community College.

Hamilton High School senior Sky Lopez signed her letter of intent to play softball at Dawson Community College on Wednesday, becoming the first person in her family to attend college.

She will receive a two-year, full-ride scholarship to pitch for the Buccaneers in Glendive.

“I’m super excited to get to play for a college team,” Lopez said. “I never thought I would be in this position; it feels surreal. I’m really excited to be part of a new team, a bigger college team.”

Lopez said she started playing between sixth and seventh grades.

“I feel self-accomplished and I love being there for my team,” she said. “When I win a game or strike someone out, it is the best feeling in the world. It is feeling of happiness I never feel with anything else – it is just the best.”

Lopez said she was grateful for those who helped her obtain the scholarship.

“I’m so blessed and thank everyone who has paved the way for me,” she said.

At the state tournament last year, Lopez was injured when a batter connected with her pitch for a line drive. She was hit by the ball, which was traveling nearly 80 mph, resulting in a severely bruised bone. Lopez had to go to the hospital and did not complete the game.

“I was watching the game from the hospital. I wasn’t going to miss it,” she said. “They played and worked their hardest. It was heartbreaking to not be there.”

While at Dawson, Lopez will study business and social sciences. Her favorite classes at Hamilton are government and Writing 101.

“The sky was the limit for her,” he said. “I worked with her for years and years and told her she could do whatever she set her mind to do. She has worked hard for everything.”

Kearns said he was not surprised Lopez was offered a scholarship.

“It was getting the right one,” he said. “This one fit her perfectly. It is a perfect situation for everyone and she’ll do great.”

Lopez’s mother, Aurora Sommers, said her daughter worked hard at playing softball and with her academics.

“We’re proud, but we’re going to miss her,” Sommers said.

A Colorado skier who was reported missing Thursday at Lost Trail Ski area has been found deceased on the Idaho side of the divide.

The end to blue light specials is coming in March to Hamilton.

Calif. bill would lower age of consent for vaccine

Calif. bill would lower age of consent for vaccine

This beautiful and personal Michelangelo piece has finally been restored

This beautiful and personal Michelangelo piece has finally been restored

Big sister Alana Johnson proudly takes a photo of Sky Lopez as she signs her letter of intent to play softball and study at Dawson Community College.