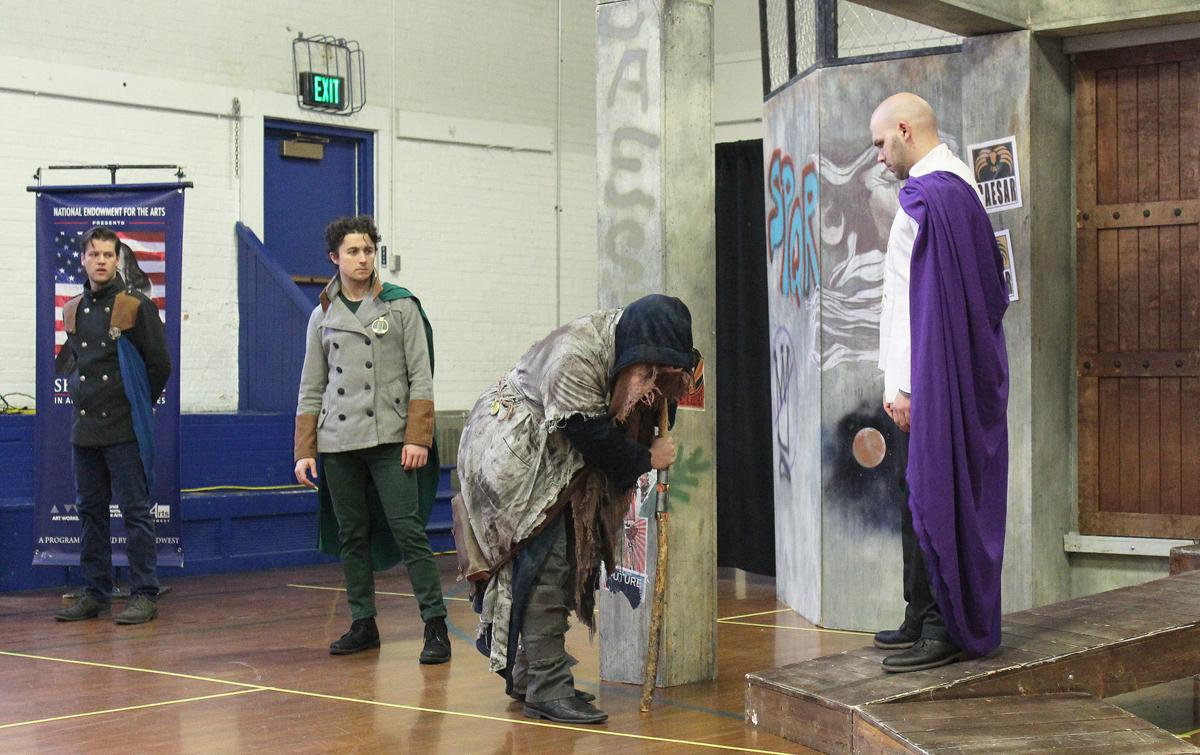 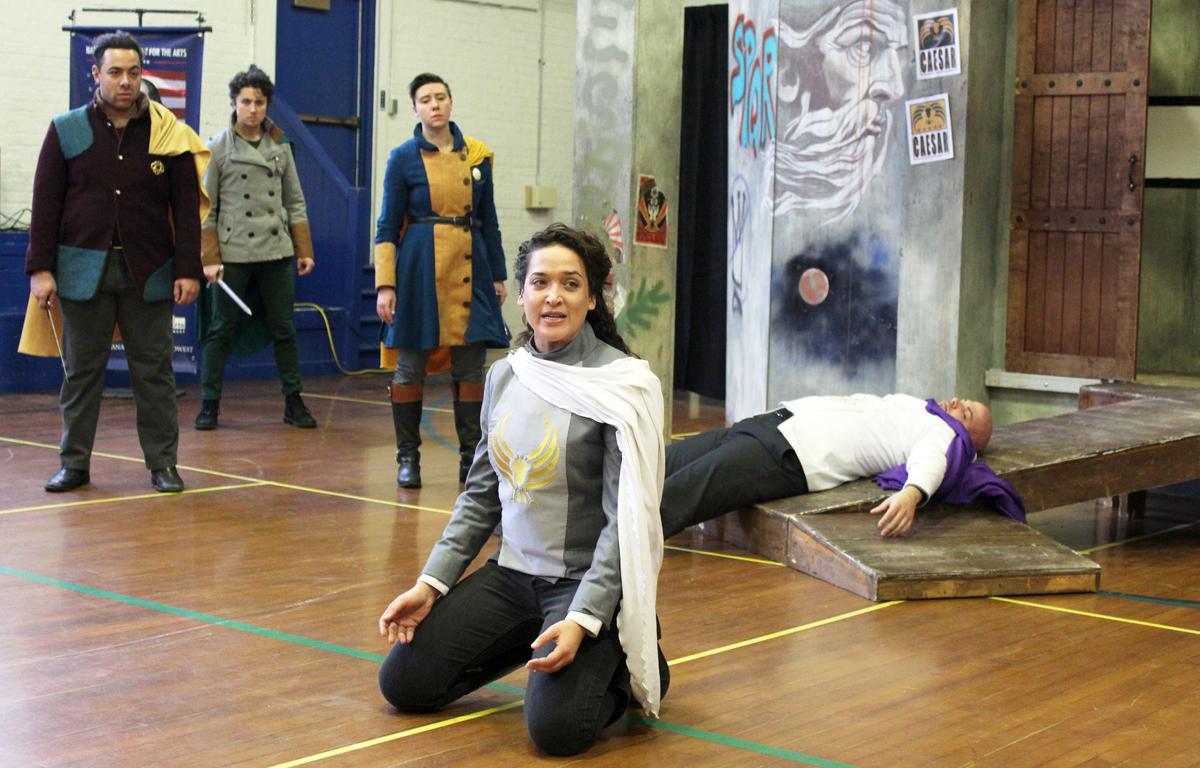 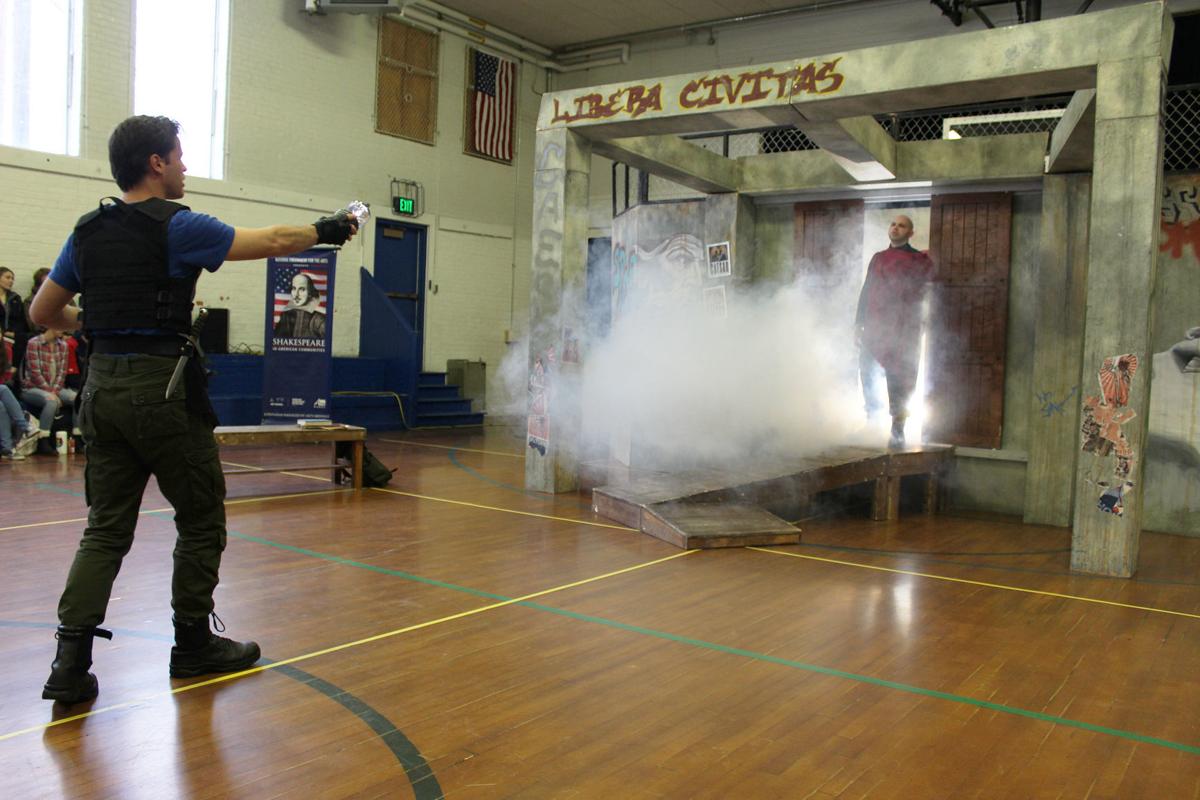 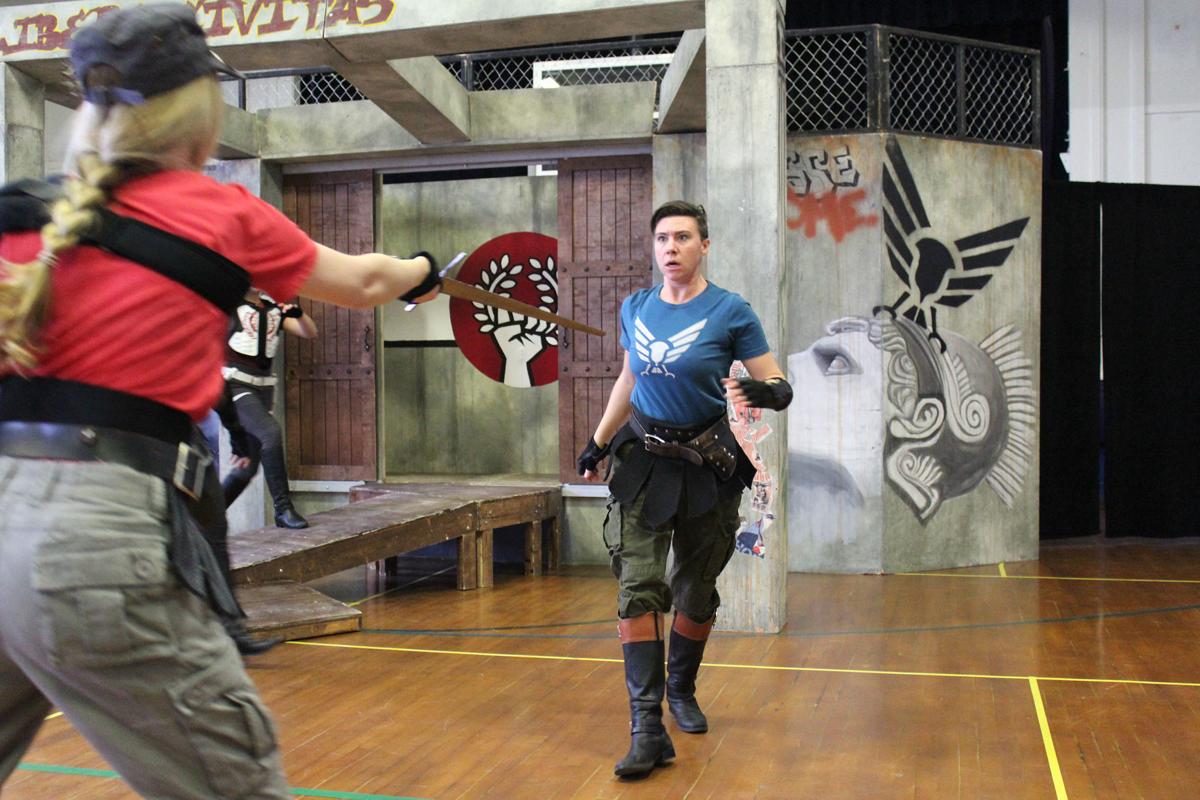 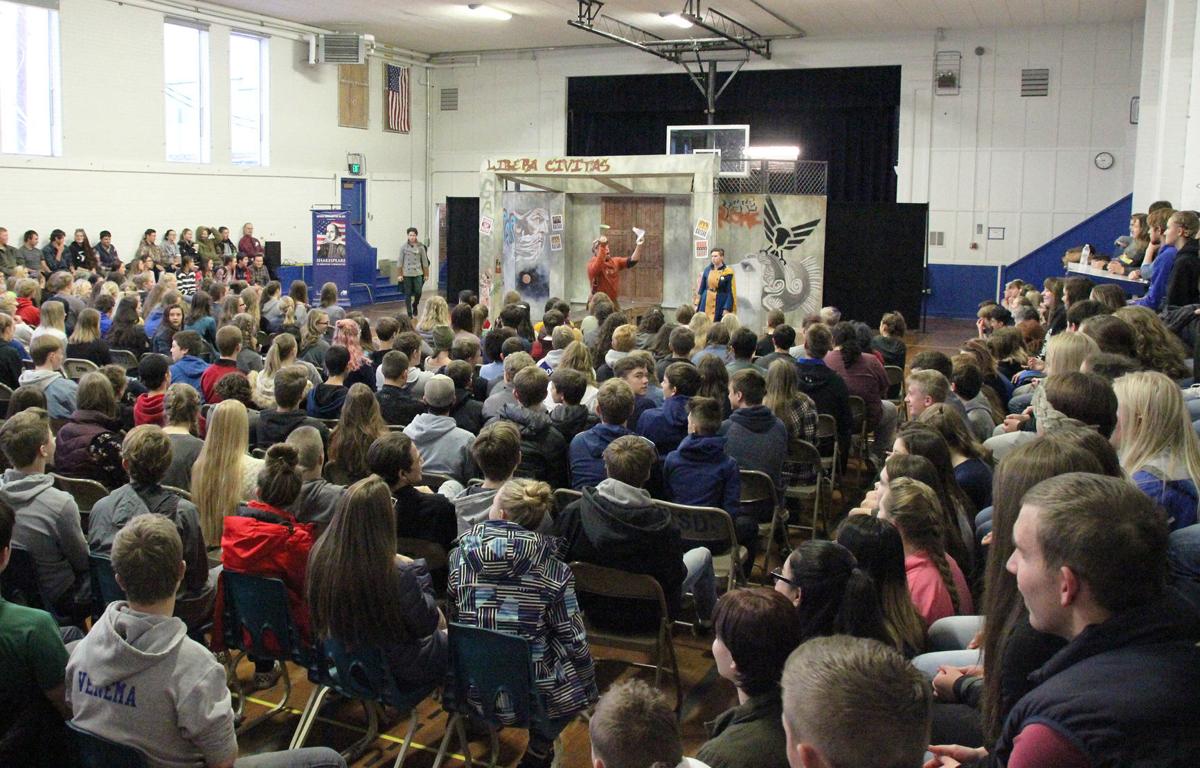 Shakespeare in the Schools performed “Julius Caesar” at Corvallis High School on Monday.

Shakespeare in the Schools performed “Julius Caesar” at high schools in Corvallis, Florence-Carlton and Hamilton this week.

On Monday, CHS English educator Suzi Pliley said having the production in the school is important.

“First of all, it is wonderful that our school finds this worthy to pay for,” she said. “I’m grateful for that because it gives the kids the experience of seeing a live performance by professional actors and exposure to how Shakespeare intended his plays to be enjoyed.”

The Shakespeare in the Schools production engaged the full audience of students and staff in the production as the crowd of Roman citizens. The set was created to look like cement walls with graffiti and cast members were sprinkled throughout the audience with megaphones to “stir up the crowd.”

Before the play, Sasha Kostyrko, tour manager for SIS, said, “‘Julius Caesar’ more than any other Shakespeare work is a play about the people so today we cast you as our citizens of Rome and invite you to engage with us.”

“Julius Caesar” is one of William Shakespeare’s tragedies, written in 1599 and based on events from Roman history.

The plot is that the great military General Julius Caesar returns after defeating Pompey and establishing Rome as a mighty military force. Several key senators, Cassius, Casca, Cinna and Brutus, disagree with crowning Caesar king and plot to assassinate him out of jealousy and fear.

A soothsayer warns Caesar “Beware the Ides of March” and his wife pleads with him to remain at home.

He leaves home, enters the capital and is stabbed to death with the final stab by loyal and respectable Brutus hence the famous line “Et tu, Brute?”

Another famous line is “Cry 'Havoc!', and let slip the dogs of war,” said by Mark Antony as he/she (played by Aila Peck for this production) vows revenge on the assassins.

Those that killed Caesar are on the run as Caesar’s spectral ghost appears to Brutus in an amazing moment with fog and light.

The mutinous senators are all killed or command their servants to kill them.

The audience remained focused and even after an alarming clap of thunder in the production, quickly settled down to hear the sound of crickets of the next scene.

After the production, members of the cast came out to answer questions in an educational “talk back.” The cast included Kostyrko, Bobby Bowman, Riley O’Toole, Aila Peck, Ty Fanning, Madison Hart, Marcus Cunningham and Torey Byrne.

Kostyrko said every production is different depending on the audience and the energy they give.

“Thank you for your energy,” she said.

The students asked the professional actors where they were from, their career paths and education. Other questions included how much time went into the preparation for the 80-minute show and how they memorized all their lines.

Actor Bobby Bowman, Caesar, said the actors receive the scripts about a month before they meet for rehearsal and arrived memorized.

“We had two and a half weeks of rehearsal and everything we had to learn, including the blocking and fights, happens in that time,” he said. “For me, memorizing is faster once I understand the scene. Similar to how you have to memorize all sorts of stuff for school if you understand the concept behind it you can learn it a lot more quickly.”

Stage combat and swordplay was also of interest to students.

“Every day we run through the fights before the show at half speed and then at full speed to continue to be accurate,” O’Toole said. “The ratio is for every second of fighting you’re supposed to have an hour of rehearsal making sure your targets are correct and that you’re defending yourself. Although it looks like we are trying to kill each other the whole point is to keep each other safe.”

Most Corvallis students have read The Hunger Games in Pliley’s class and the actors compared it with Julius Caesar.

“Actually, over Thanksgiving break we watched all of The Hunger Games movies,” Bowman said. “We were shocked at the amount of characters with the same names, the amount of symbolism and the language and arguments that are similar.”

Even if the audience doesn’t understand all the words of Shakespeare, the expression of voice, posture and interactions of the actors explain the scenes. Bringing the “plays to life” show their relevance today.

Kevin Asselin, artistic director for Montana State University’s Shakespeare in the Schools, said in the playbill that the productions provide thinking and talking points.

“In Julius Caesar, Shakespeare reminds us that a lack of reason and inability to communicate can play a role in not only the collapse of government, but also the collapse of relationships and the natural world,” Asselin said. “It is my hope these themes will resonate with our viewers, and serve as a sobering reminder of the need for reasoned dialogue and mutual respect in culturally tumultuous times.”

Aubree McGinnis said, “It’s so cool to be able to learn so many tricks and tips from such amazing actors.”

Aiden Rassmussen McGee said he enjoyed the play “due to the great story and great actors.”

After the production, interested students attended workshops from the actors on: The Public: Persuasion Through Art (exploring language through great rhetoric and visual art); Ambition: Thirsting for Power (personal and political power) and Revolution: Violence and its Consequences (physical theatre stage combat and movement workshop).

Corvallis English and Speech and Drama students attended the workshops that are also suited to social studies, history and civics classes.

Shakespeare in the Schools, in its 26th season, is traveling to 49 different communities, and performing for nearly 12,000 middle and high school students throughout Montana and Wyoming.

No travel ban in Ravalli County

Motorists, pedestrians and bicyclists do not have to be concerned about being stopped and questioned regarding their reasons for being outside of their homes, Sheriff Steve Holton said in a press release late Friday afternoon.

The Bitterroot National Forest announced Thursday that it would be closing all campgrounds, Lake Como day-use sites, Woods Cabin and the East Fork Guard Station through April 30th to help reduce the potential spread of the novel coronavirus.

Letter from the publisher

The Missoulian and Ravalli Republic are taking steps to reduce expenses in the second quarter. Our employees will each be required to take two weeks off without pay during the quarter.

Several fundraising efforts continue for a Stevensville man and his two grandchildren who survived a shooting that took the lives of two women.

STEVENSVILLE — Ray E. Williams, 64, of Stevensville, passed away after being diagnosed in January 2020 with pancreatic cancer. His wife of, Pa…

Wanting to prevent the spread of the COVID-19 disease caused by coronavirus, Ravalli County community members are stepping forward to do what they can to help.

I am coronavirused out. There must be nothing going on in the world except what we hear and read about daily.

Shakespeare in the Schools performed “Julius Caesar” at Corvallis High School on Monday.