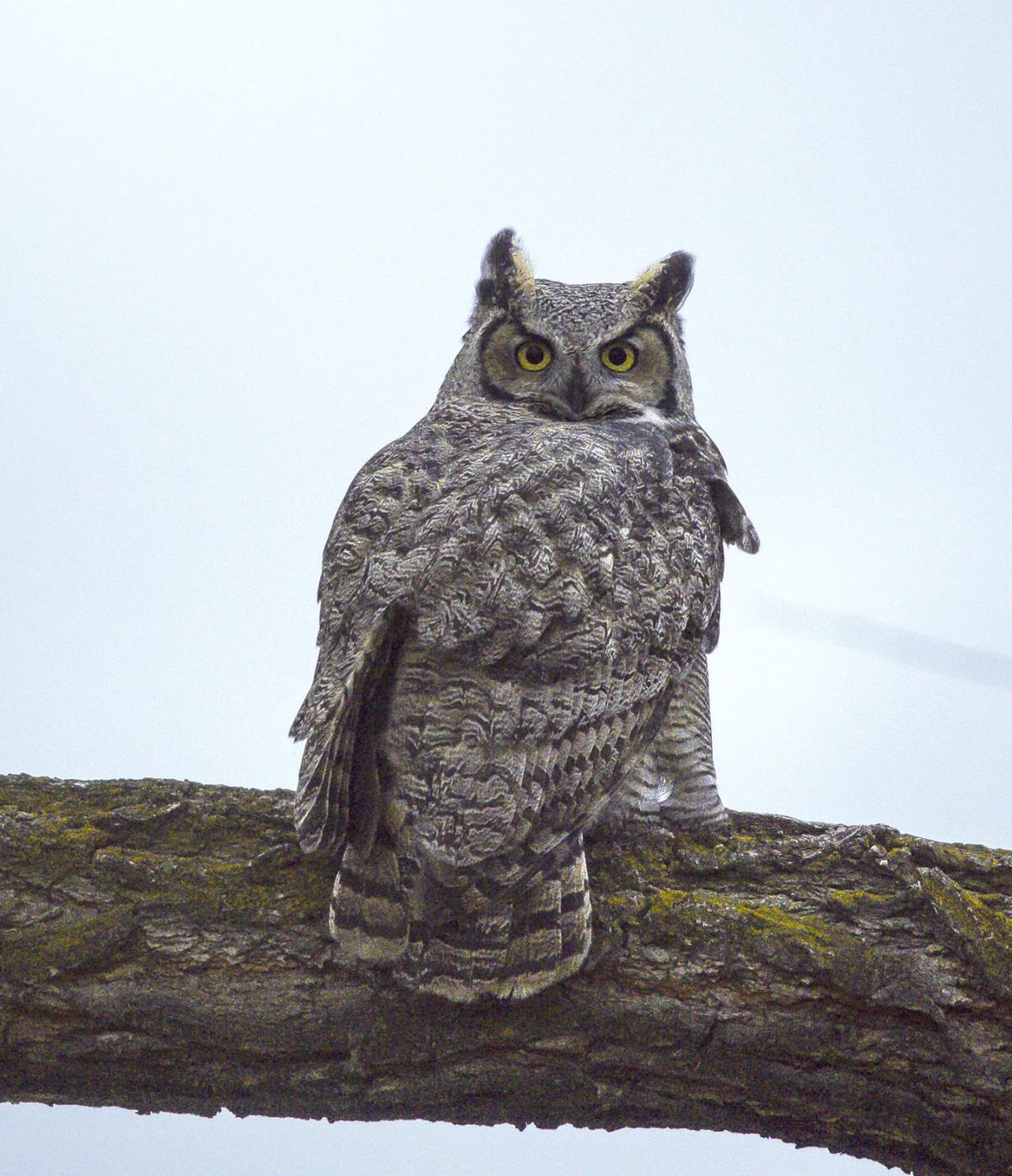 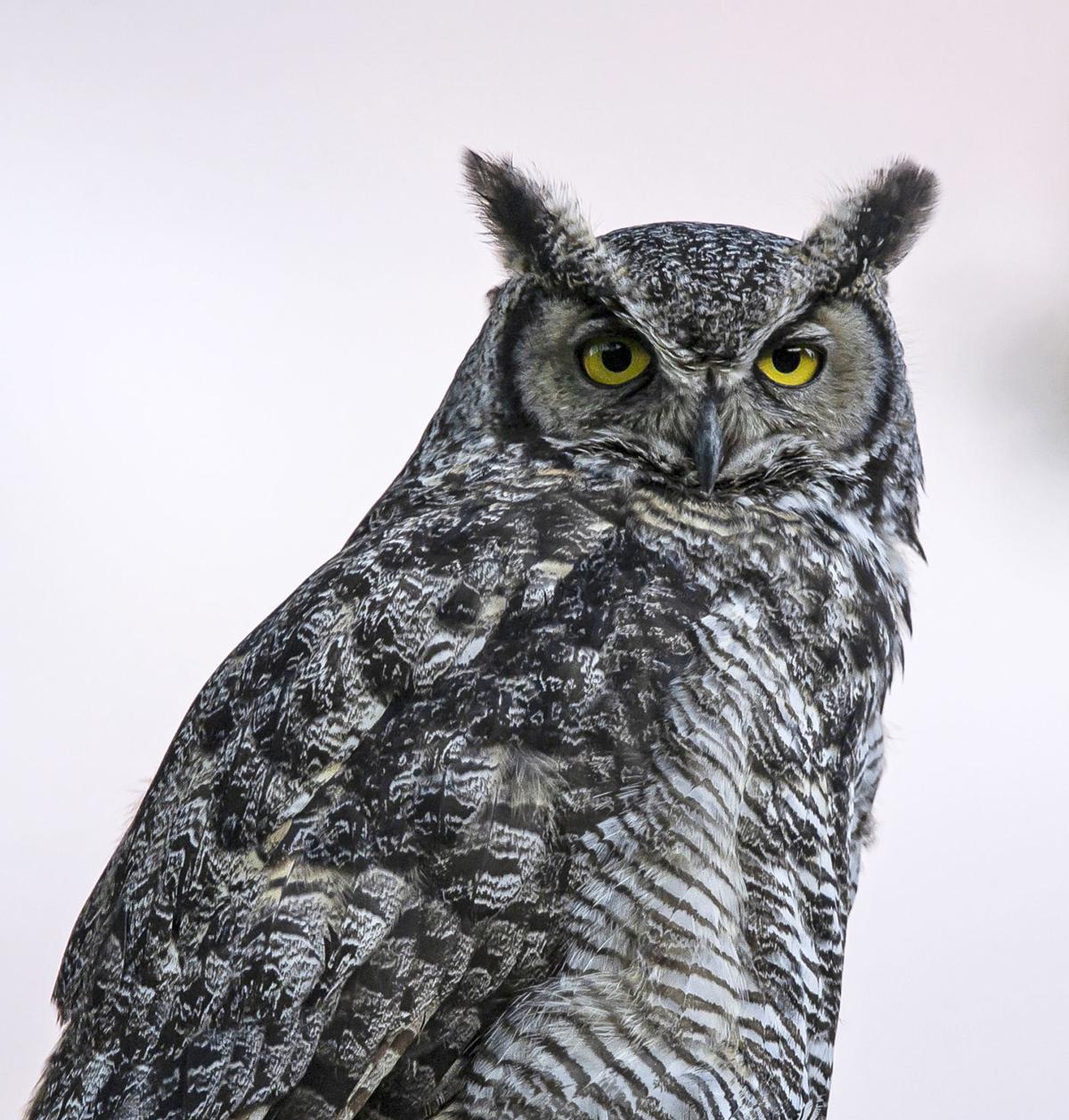 This, the largest of the Bitterroot “eared” owls, the great horned owl, is a yearlong resident of the Bitterroot. Probably most known for its nighttime hoots, this owl is among the most vocal of owls and can be heard hooting at great distances, most actively at dusk and dawn.

As I approached the leafless willow tree, I noticed a dark silhouette move from one limb to another and I immediately knew what predator lay lurking in the branches. While I am sure if provided an opportunity to capture a rodent in daylight, it would. However, I suspect it is more interested in simply roosting in the tree, awaiting dusk and dark when it will use its keen eyesight and soundless flight to capture a nighttime meal. When I broke the distance barrier of what this bird would stand from me, it took flight silently, low over the cattails headed for another vacant willow hopefully avoiding another intruder. This, the largest of the Bitterroot “eared” owls, the great horned owl, is a yearlong resident of the Bitterroot. Probably most known for its nighttime hoots, this owl is among the most vocal of owls and can be heard hooting at great distances, most actively at dusk and dawn.

Great horned owls inhabit landscapes throughout North America and are thought to be the owl that makes up the majority of human interest, whether it is in books, movies, or cartoons. It’s the great horned owl that is best known as the litter mascot, Woodsy the Owl, for its famous line “Give a hoot, don’t pollute.” This majestic bird is also known for having one of the most diverse prey menus of any raptor, feeding on rodents and other mammals, including skunks, as well as birds, reptiles and an occasional insect. While hard to believe, great horned owls will often prey on other raptors including falcons, which are especially vulnerable when feeding on captured prey unaware that a great horned owl may be eyeing them from above.

I once had someone tell me that great horned owls have a gland that emits a skunk odor. I politely corrected the person, explaining that owls as with most birds lack the ability to smell and that the skunk odor on owls is just that. It comes from skunks that the owls capture for food. Warning: Don’t let your black and white cat or small dog out at night when a great horned owl is hooting nearby or you may be missing a pet the next day. Great horned owls have few predators. Yet, like many raptors, they are commonly found dead or injured along roadsides where they are hit by a vehicle when they dive down from a nearby power pole to capture prey, only to be blinded by oncoming vehicle headlights.

Great horned owls have enormous bright-yellow eyes with a black pupil. The eyes are fixed in the skull eye sockets and although people think they can move the eye to see more, the truth is the bird is equipped with a neck that can rotate 180 degrees, which allows it to see behind it without repositioning its body. Another interesting adaptation of great horned owls, as with most owls, is their soundless flight. This allows the owls to fly in to capture prey without the noise of air turbulence or swooshing sounds most birds make in flight. Owls can do this because they have feather adaptations on their primary wing feathers that serve to silence the turbulence. Additionally, they have a much larger wing size compared to body size that allows the owl to fly slowly without rapid wing beats like a pigeon.

As with many raptors the female is slightly larger than the male yet both sexes assist with nest incubation. Nests are typically found in abandoned red tail hawk or even bald eagle nests, which consist of sticks woven into a bowl shape. The owlets, as they are referred to, have an enormous appetite which demands the parents are actively capturing prey for the young to consume. Beneath the nest or in many roost trees great horned owls, like many owls, regurgitate an owl pellet that consists of the fur and bones of the rodents they consume. I can’t count the number of times students visiting Teller were in search of these pellets to dissect for a class project.

From a conservation perspective, the North American Breeding Bird Survey reveals a 33% decline in great horned owls from 1966 through 2015. Population fluctuations are thought to be linked to the corresponding abundance and population cycles of prey such as voles. As for the great horned owls residing on Teller, they seem to be doing well, enjoying a conservation property with abundant prey.

Sam Lawry, Teller Wildlife Refuge Executive Director has 35 plus years in the wildlife conservation profession. His contributions to the Ravalli Republic are intended to share some of that knowledge of wildlife in the Bitterroot with the community. If you would like more information about Teller Wildlife Refuge please visit www.tellerwildlife.org.

Students with Corvallis High School’s Classroom Without Walls are hoping that their new partnership with Teller and Montana Fish, Wildlife and Parks in managing the 1.5-mile long trail can help begin addressing so issues there.

Having spent many hours in the woods in Iowa, I have a clear recollection of the unmistakable call of the eastern blue jay.

Bitterroot Buffleheads: A common duck that some call the butterball

Scientific Latin names for waterfowl species have always intrigued me.

Prairie Falcons are more common than their cousin the Peregrine Falcon on the valley floor of the Bitterroot. A bit smaller in size, the Prairie seems to prefer the agricultural-grassland habitats, hence its name.

Bald eagles are conservation success story in Bitterroot and beyond

No matter if you’re sitting in a drift boat, driving a car, out for a jog or simply walking the dog, when Haliaeetus leucocephalus flies by, o…

The Bitterroot Valley's most beautiful duck

Spring, here at Teller is often signaled by the return of migratory birds that use Teller habitats seasonally, to court, nest and successfully…

This, the largest of the Bitterroot “eared” owls, the great horned owl, is a yearlong resident of the Bitterroot. Probably most known for its nighttime hoots, this owl is among the most vocal of owls and can be heard hooting at great distances, most actively at dusk and dawn.