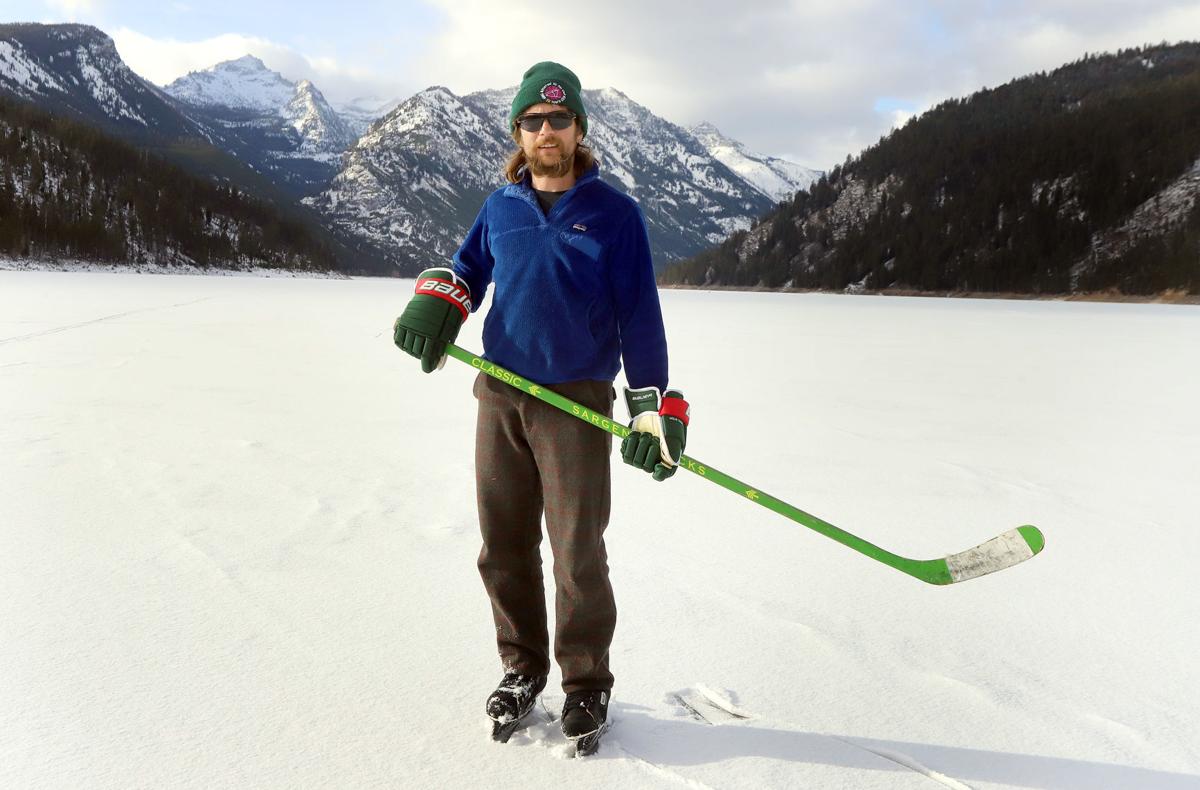 Jesse Crocker of Darby had a close call last Sunday afternoon at Lake Como. On a solo ice skating trip, Crocker fell through the ice when he was about half way across the lake. Fortunately, he was carrying his hockey stick, which he used to help pull himself out of the water. 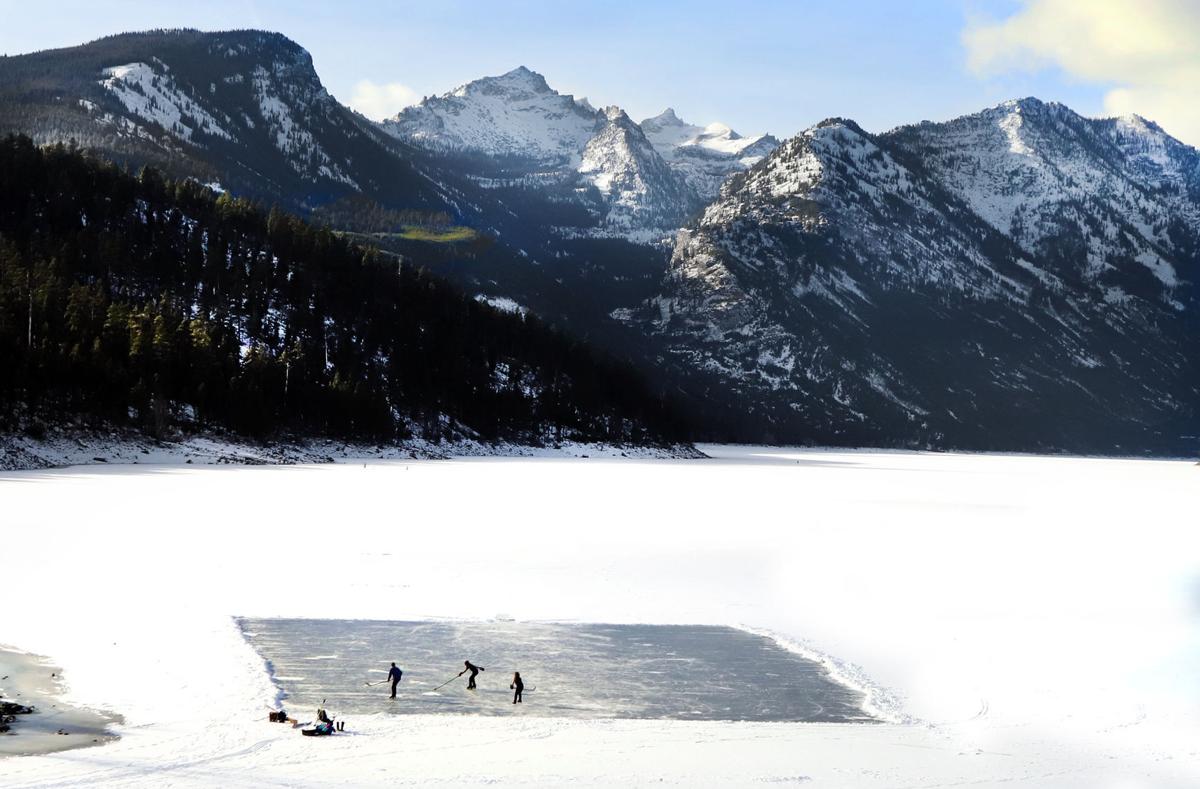 A group of hockey players have worked to keep a rink open at Lake Como this year. 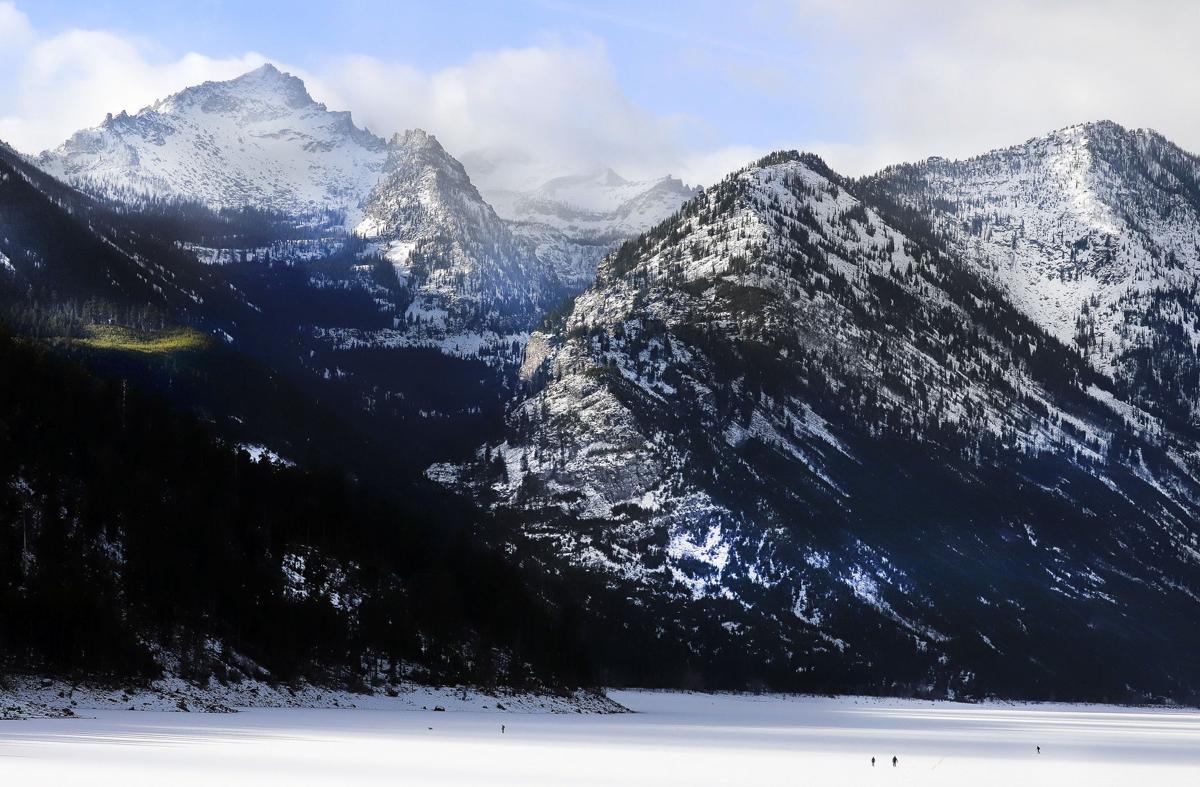 Ice skaters have taken advantage of the lack of low-level snow this year to get out and the enjoy the ice on Lake Como south of Hamilton.

It’s not every year that Lake Como becomes a perfect ice rink.

But this year, with its cold nights and little low elevation snow, the picturesque lake south of Hamilton has been drawing crowds of ice skaters these last couple of weeks.

Jesse Crocker of Darby is one who keeps a close eye on the ice at Lake Como. In three of the past six years, he and his wife have taken advantage of the clear ice when it appeared, to glide across the lake or enjoy a game of hockey with friends.

Last Sunday, he and his wife had gone skating in the morning.

The ice was so perfect that Crocker decided to go a second time in the afternoon by himself. He was skating not 100 feet from the tracks the couple had set earlier that day when all of a sudden he found himself neck-deep in freezing water.

Crocker was out near the middle of the lake.

And he was alone.

“I have gone through the ice a couple of times in the past in shallower water and so it wasn’t a totally unfamiliar feeling,” Crocker said. “If I hadn’t been through this before, it might have been a different story.”

Fortunately, Crocker was carrying his hockey stick when the ice broke out from under him.

Crocker used the hockey stick to spread his weight across the ice and as a stabilizer as he worked to pull himself out. He was halfway there when the ice broke a second time and plunged him back into the water.

On his second try, Crocker managed to get up on top of the ice and slide away from the hole.

“I headed back to the car as fast as I could,” he said. “I didn’t even think to go back and get my hockey puck.”

Crocker thinks he found a shallow spot in the ice that might have been created by the current that runs through the lake.

“On most of the lake, the ice is four inches thick,” he said. “The spot where I fell through had less than an inch of ice. I think the current may have been close to the surface at that point and was eroding the ice.”

Crocker said there have been a lot of people out enjoying the ice at Lake Como this year. On Friday, he estimates there may have been about 30 people there skating and playing hockey.

“We’ve been up there almost every day,” he said. “There have been lots of people out there skating. Families with little kids. A few folks venturing out across the lake.”

Crocker came away with a couple of lessons from his close call.

When he isn’t skating with a hockey stick, Crocker said he usually carries an ice ax or a little pick that he can use to pull himself out of the hole in the ice.

Bitterroot National Forest’s Darby District Ranger Eric Winthers said this was the first time that he’s heard of someone falling through the ice at Lake Como in the five or six years that he’s been here.

“It’s certainly an issue that everyone needs to be aware of,” Winthers said. “I would remind visitors to be extra cautious due to the warm weather that we’re having right now.”

Temperatures are forecast to edge up into the low and mid-40s through the weekend.

“We’re not in the business of monitoring those ice conditions,” Winthers said. “People just need to be aware of those hazards and practice good ice safety measures.”

Montana Fish, Wildlife and Parks offers this advice for anyone recreating on the ice:

• Anglers and other recreationists should be familiar with the water body they plan to fish or recreate on. Pay close attention to the changing conditions of the ice.

• If you have even the slightest doubt about the safety of the ice — stay off of it. Nothing is ever worth a fall into frigid water.

• Blue or “clear” ice is usually hard. Watch out for opaque, gray, dark or porous spots in the ice that could be weak, soft areas. Ice also tends to thin more quickly at the shorelines.

• Note areas on the ice that look “different” — they usually are! Many times, thinner areas of ice (caused by springs, gas pockets, sunken islands, points, etc.) have a different color or look to them. Use extreme caution or stay away from these areas.

• 4 inches: Ice fishing or other activities on foot

Church, business work together to provide 400 ham dinners and $10K in gift cards

Hamilton's Mosiac Church is partnering with the Corvallis Mercantile to provide 400 ham dinners and $10,000 in gift cards for people in need this holiday season.

Marcus Daly Memorial Hospital officials are ramping up to receive the first shipment of COVID-19 vaccine before the end of the month.

Parade of Pooches: Community comes together to bring Christmas to care home residents

Kathy Clark knows from experience that nothing lifts people’s spirits quite like dogs dressed up in silly Christmas costumes.

A Hamilton man charged with his teenage brother of shooting at a vehicle coming up their driveway will get a chance to set his life straight.

Ravalli County could receive its first doses of COVID-19 vaccine as soon as next week.

The Bitterroot Valley's Stewart "Brandy" Brandborg was named to the Montana Outdoor Hall of Fame earlier this month.

Hamilton will be the site of a new vaccine production facility.

Jesse Crocker of Darby had a close call last Sunday afternoon at Lake Como. On a solo ice skating trip, Crocker fell through the ice when he was about half way across the lake. Fortunately, he was carrying his hockey stick, which he used to help pull himself out of the water.

A group of hockey players have worked to keep a rink open at Lake Como this year.

Ice skaters have taken advantage of the lack of low-level snow this year to get out and the enjoy the ice on Lake Como south of Hamilton.