The man who led an armed standoff with the federal government at an Oregon wildlife refuge has offered his support to the landowners with property behind a controversial gate in Hughes Creek  in southern Ravalli County.

“For over 40 years, the U.S. Forest Service and special interest environmental groups in Ravalli County, Montana, have attempted to destroy the right to private property with the ploy of public access,” Bundy wrote.

Ravalli County Commission Chair Jeff Burrows said the blog was filled with inaccuracies and information that was untrue.

“It’s inaccurate to say this board of commissioners does not support private property rights,” Burrows said. “It’s blatantly false to single me out as taking the lead in bringing up the Hughes Creek issue. That’s just untrue.”

The Hughes Creek Road issue has a long history filled with court challenges and animosity.

The current legal battle began in 2016 when landowners petitioned the commission to abandon a portion of the road immediately behind the gate. After completing a review of the historical record, written comments and public testimony, the commission ruled the road that dates back to 1900 was 11.8 miles long. The county contends 3 miles of the road beyond the gate is public land.

Following the commission’s decision, one of the landowners, the Bugli family,  reached out to Bundy for help.

“We thought it was important to get the word out,” Jay Bugli of Stevensville said Thursday. “It’s very important that people know what’s going on here, especially private property owners who have concerns on what might happen if this type of precedent is established.”

Bugli said the family chose Bundy because “he’s had experience with issues of government overreach.”

Bundy led the 2016 armed occupation of the Malheur National Wildlife Refuge. He also participated in the 2014 standoff at his family’s ranch in Nevada when the Bureau of land Management attempted to confiscate his father’s cattle that had been grazing on federal land without a permit for years.

Charges against Bundy were dropped in the 2014 standoff after a judge declared a mistrial. A jury found him not guilty on charges he faced following the incident in Oregon.

Bugli's claims that Ravalli County withheld important information from the Hughes Creek landowners was echoed in Bundy’s blog. Both men say the county commission should allow another hearing to reconsider the new evidence they claimed has been uncovered about the origins of the road.

If the commission chooses to stay the course and remove the gate, Bugli said the property owners plan to make a stand. At this point, Bugli said he can’t say what that would look like.

“We’re not going to do anything violent … but I don’t know what will take place,” he said.

Bugli said he would not promote anything like what happened at the Oregon wildlife refuge.

“We would not promote that in any way, shape or form,” he said. “What groups of people who do come to town who are are angry and upset, we would not have any control over that. All we are doing is trying to protect our property rights.”

Bundy said he and Eric Parker of The Real Three Percent of Idaho, made a trip to Ravalli County following an invitation by the Bugli family. Parker may be best known for the 2014 photograph of him prone on an overpass pointing an assault rifle toward a Bureau of Land Management base camp in Nevada during the standoff at the Bundy Ranch.

"Three Percenters" are groups that view the federal government as overreaching, and take their name from their belief that only 3% of colonists fought against the British in the Revolutionary War.

“I see the happy path as being the county gives the Buglis and Coxes another hearing where the new evidence that had been locked away in the attic can be reviewed,” Bundy said.

That evidence shows that county road was never petitioned to go beyond the gate, he said.

If that doesn’t happen, “then we shine a whole lot of light on it,” Bundy said. “We have evidence that was clearly withheld from the families.… It shows clearly that the county road ended before or at the gate.”

“I hope the Republic form of government can function better here than it did in Harney County (Oregon),” Bundy said. “I do think there are a lot of people who will see this for what it is. It is a taking. I think they’ll stand.”

Parker posted a video titled “Stand off brewing In Montana?” on YouTube that included him narrating a visit to the Cox family property.

After seeing chickens run across the road, Parker said that’s “very Americana. A lot of heritage right here. Obviously, anyone going to come here is a rugged individualist. They might even be a leave-me-the-f----aloneist.

“It’s their little piece of the American dream … until the government comes and decides to be terrorists and terrorize them,” Parker said. “Now they live every day wondering when the other shoe is going to drop and the government is going to come and force their way through. … They are on their own, out here. That’s where we have an issue. We don’t believe neighbors should have to stand alone, especially when they are standing on principle for our property rights.”

Burrows said it’s not true that the county commission is working to take away anyone’s private property rights. The issue only came to the forefront after the landowners brought the petition to abandon the road to the commission, he said.

The commission’s decision was based on a review of the historic records with council from the county attorney’s office, he said.

Commissioner Greg Chilcott said if the landowners have new information, they need to present in the proper venue.

“Mr. Bundy should not have an impact on us doing our job,” Chilcott said. “If there is new evidence, then it must be presented in a procedurally correct manner.”

At this point, Chilcott said the commission does not have a timetable on when the gate must come down. The commission plans to wait until all of the landowner’s legal remedies have run their course.

“Once it comes to an end, if they have not followed through with taking down the gate, I don’t think the county will respond well to intimidation,” he said. “We certainly don’t want to make the wrong decision. Our decision was based on the evidence brought to us. We made the only decision we legally could, whether we liked it or not.”

The Hughes Creek issue went before the Ravalli County Commission in 2016 after two retired Forest Service employees brought a Montana Supreme Court decision to the commission's attention in 2016. The court found that a petitioned road gated in 1980 was still a county road despite the fact the public had been kept off it for decades.

Under state law, the county can't abandon a petitioned road if there isn't another public access that provides substantially the same access to public lands or waters. After determining there wasn't another access, three of five commissioners voted to close the road.

The landowners filed a petition for the county to close the road in late 2016.

Sometime soon, Arlin Fratzke will say goodbye to the registered herd of Angus cattle that his family has raised for decades on their place not…

Stevensville’s fire and police departments will remember the first responders who lost their lives on Sept. 11, 2001.

Fall burning season officially is underway in Ravalli County, following a soaking rain that dropped nearly an inch of precipitation.

A Hamilton couple whose garage access was blocked by a new school district road were surprised Thursday with a ramp to the garage.

A Hamilton couple who thought the issue of a berm blocking their driveway had been resolved got a rude awakening Friday.

No one knows for certain exactly where vendors of Hamilton’s popular farmers market will set up their booths next summer. 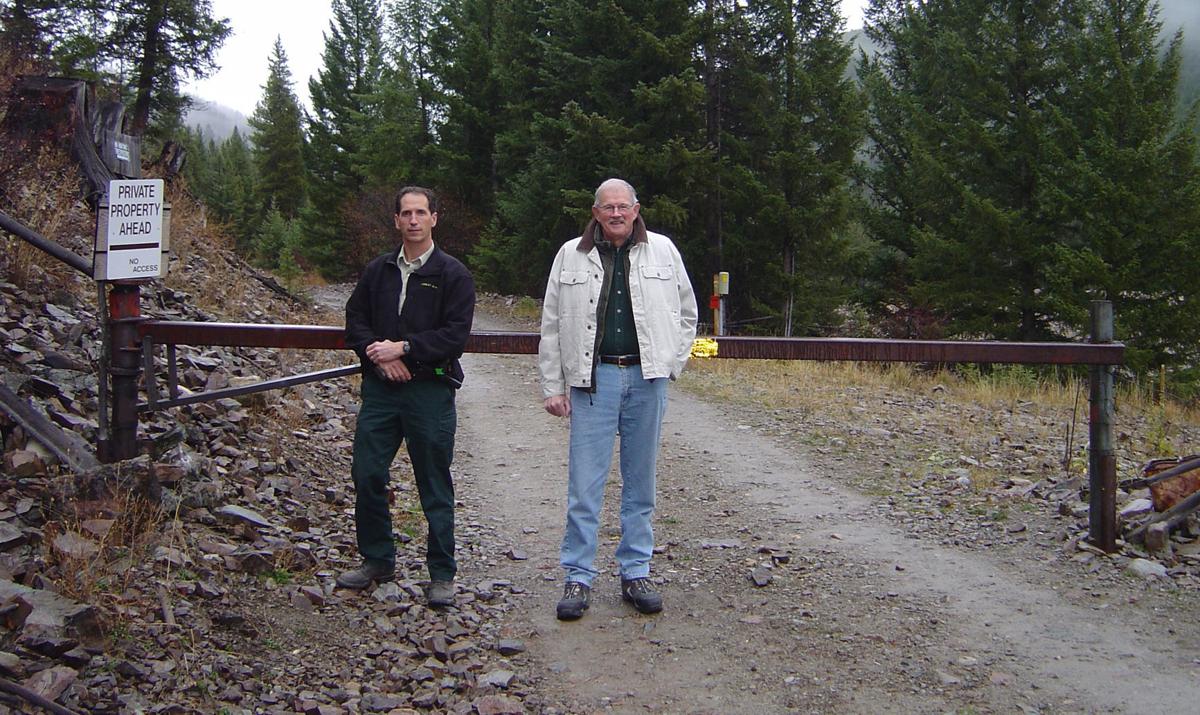 Ravalli County Fish and Wildlife Association's Jim Olson poses with an unidentified Forest Service official at the gate across Hughes Creek in this undated photograph. 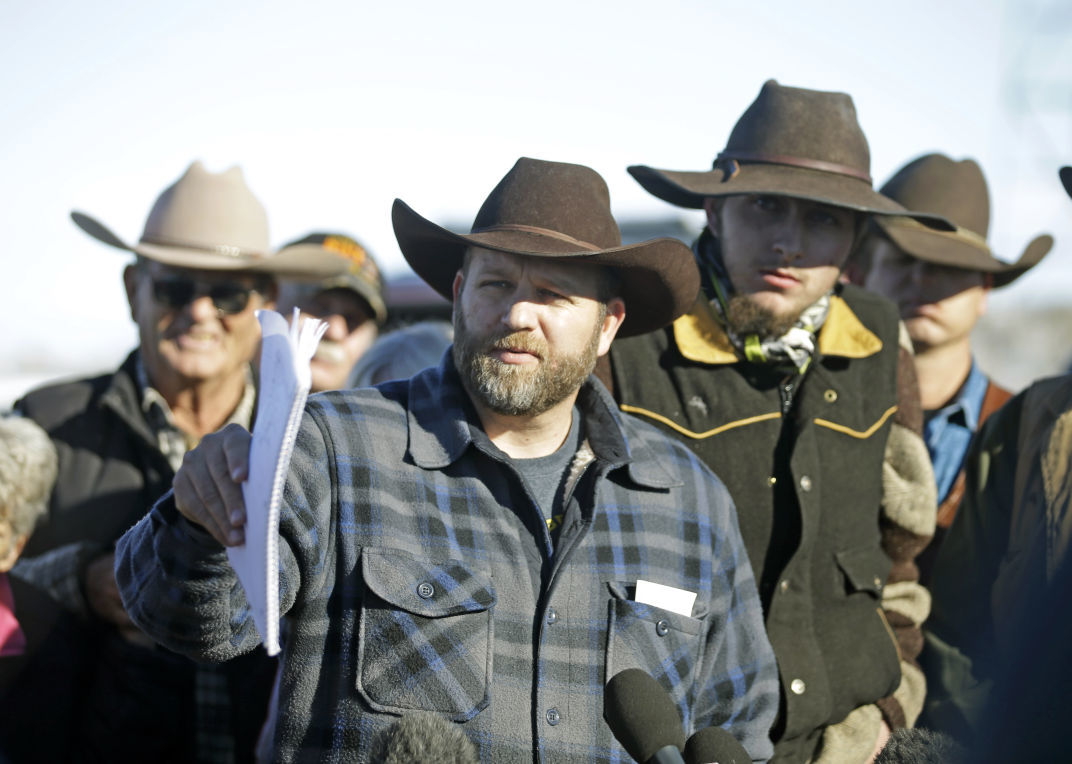 Ammon Bundy, center, speaks with a reporter at a news conference at Malheur National Wildlife Refuge Friday, Jan. 8, 2016, near Burns, Oregon. Bundy was the leader of an armed group occupying the national wildlife refuge to protest federal land management policies.