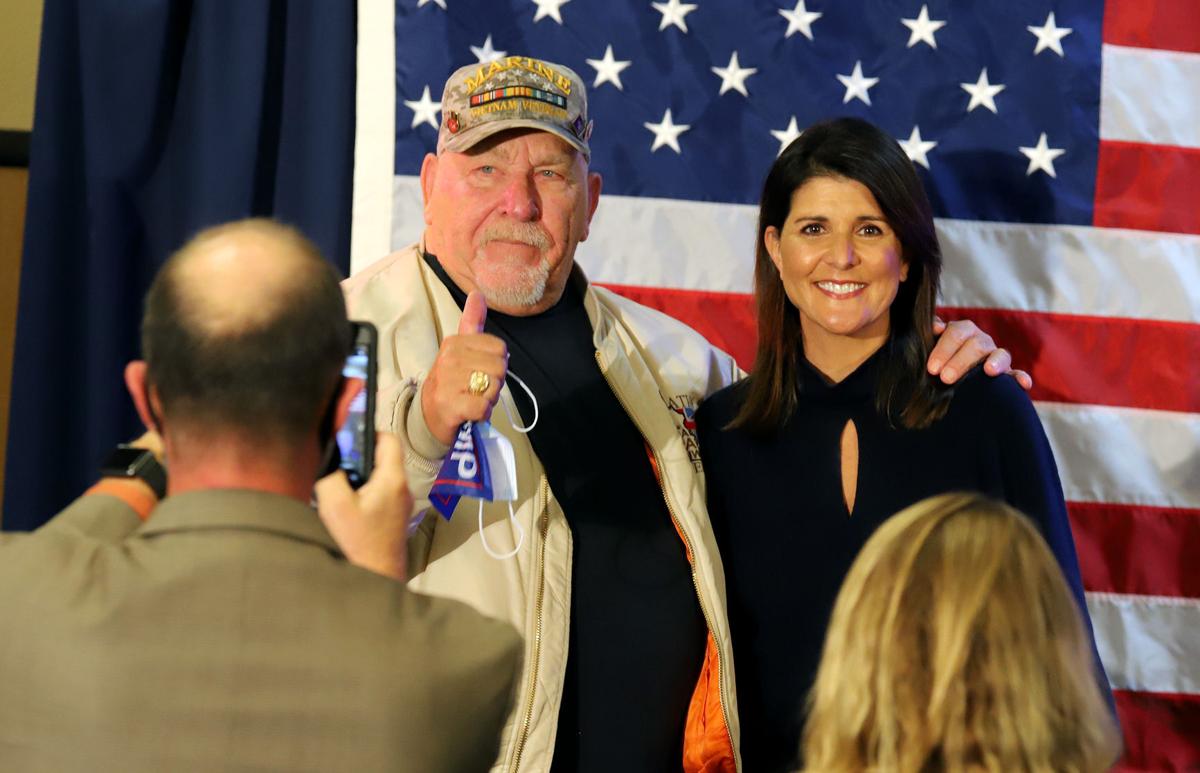 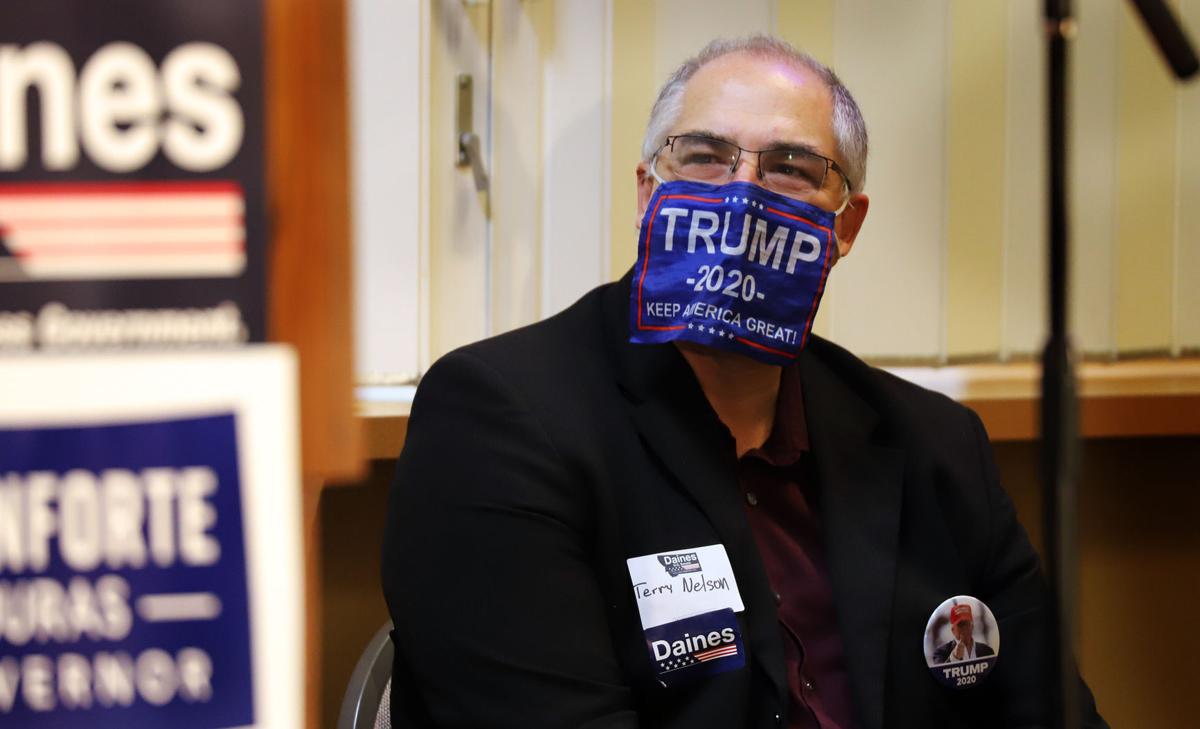 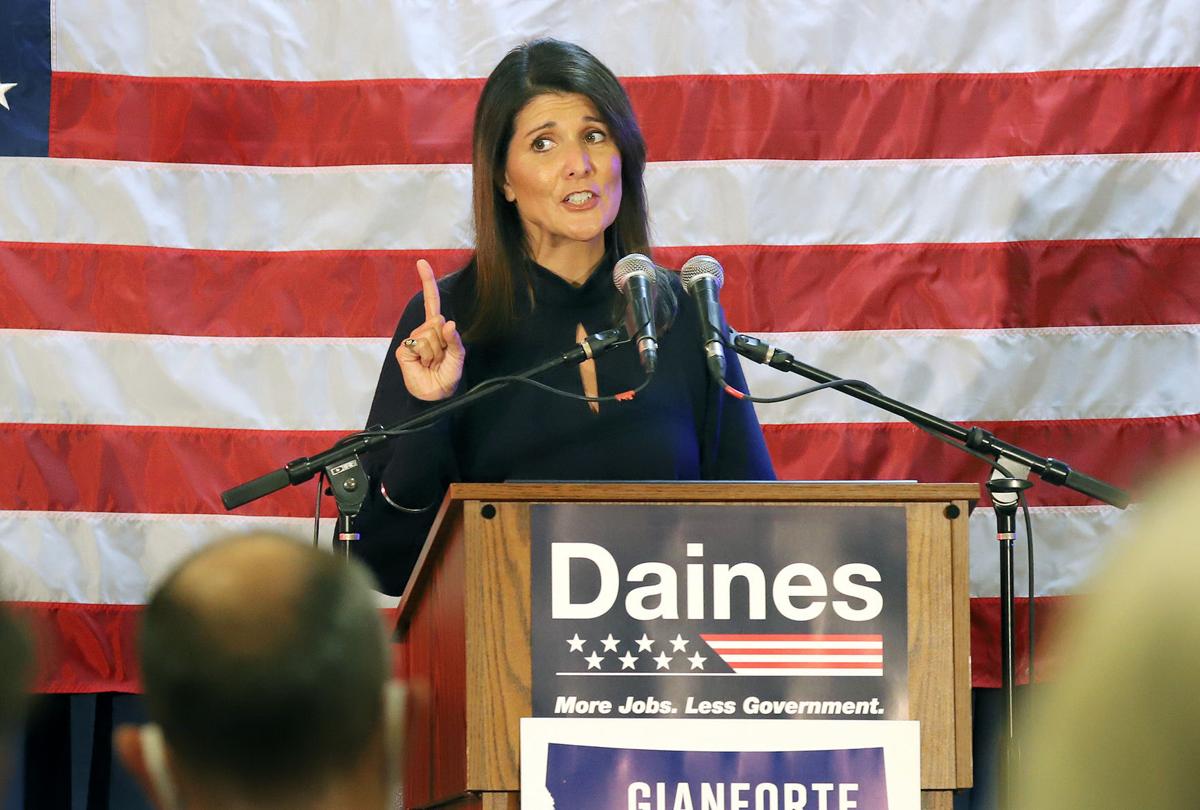 Former U.S. ambassador to the United Nations Nikki Haley was the keynote speaker at a campaign event in Hamilton on Monday for Sen. Steve Daines and Montana gubernatorial candidate Greg Gianforte.

Former United Nation’s Ambassador Nikki Haley came to Hamilton on Monday to urge a small group of Republicans to do whatever they could to ensure their friends and family to get out and vote.

It was the first of three stops that Haley made to campaign for U.S. Sen. Steve Daines and Montana gubernatorial candidate Greg Gianforte.

On that same day, Ravalli County Elections Administrator Regina Plettenberg marveled at the fact that nearly 9,000 county residents had already cast their votes during the first week of the general election’s mail ballot election.

If that trend holds, county voters may match last spring’s record-setting primary numbers of a little more than 18,000 with more than a week left before the Nov. 3 general election.

“The returns so far have been wonderful,” Plettenberg said. “People are mailing them and bringing them into the office. It’s been a steady stream.”

On average, about 900 people dropped off their ballots in person last week.

“I was hoping that’s what would happen,” Plettenberg said. “Initially, I was afraid that people would wait until the last minute…I don’t want to see a line out my door on Election Day. I want to break up that line and reduce the crowds.”

Ravalli County is one of the 45 counties in Montana that are conducting their election by mail this year. None of the regular polling places will be open on Election Day.

The number of people registering to vote this year in Ravalli County has averaged about 75 a day over the last few weeks. Many of those are people who have recently moved into the county.

As of Monday, Plettenberg has sent out 30,000 ballots. She expects to see close to 85% of those to come back, which would set a new record for the number of ballots cast in an election.

In Montana for her first time, Haley was on the campaign trail for Republican candidates Daines and Gianforte. Incumbent Daines is running against Gov. Steve Bullock, a Democrat, and Gianforte is up against Lt. Gov. Mike Cooney. With later stops planned for Kalispell and Great Falls, Haley started her day talking to a well-spaced and masked crowd of about 25 Ravalli County Republicans at the Bitterroot River Inn.

Beyond offering her thoughts on the attributes of the Republican candidates and the shortfalls of Democrats, Haley also offered a couple of stories about her time as U.N. ambassador, including President Donald Trump’s decision to use his nickname for the North Korean leader during an important speech.

“Over the last few years, I was at the United Nations,” Haley said. “It is where murderers, thieves and corrupt dictators go to denounce America and then have their hands out asking for money. I always said you had to put on your body armor. You didn’t know which county you were going to be fighting that day, but you knew you would be fighting one of those countries.”

Haley said she had a “fun time” watching the president’s interactions with that organization.

During the Trump Administration’s first “high level week” — a time when the leaders of the 193 countries part of the United Nations gather to give their foreign policy speeches to the world — the president made an unusual request, Haley said.

“It’s a big deal,” she said. “It was the president’s first year. I really wanted him to get it right. He calls me Sunday and says ‘OK Nikki, are we ready to go?’ ‘Yes sir. We have all your meetings lined up and you’re good to go.’”

The president asked Haley if she had read his speech. She told him yes and that it was “fantastic.”

And then she offered him some advice.

“Mr. President, I just want to give you the lay of the land,” Haley said. “It’s not going to be like anything you dealt with before.”

“You don’t understand,” Haley said she told him. “When you give your speech, they’re not going to clap for you. This is not going to be a rally, but don’t take it personally. I want you to just think of it like church.”

Trump replied: “Church, church, got it, but I want to ask your opinion on something.”

Haley said about what.

“What do you think if I refer to Kim as little rocket man in the speech?” Haley said the president asked.

At that point, laughter filled the Bitterroot Inn’s conference room.

Haley continued: “Mr. President, remember the part I said about church. He said ‘I know, but I tweeted it out this morning and the base really loved it. I think it would be great.’”

“You’re the president,” Haley said she told Trump. “You do what you want. I just can’t promise you the kind of reaction you’re going to get.”

“So we go into the day of the speech,” Haley said. “He’s up there, and he starts speaking. The North Korean delegation is in the front row and then he says it. And then there’s a delay because people have their interpreter pieces in their ear. All of a sudden you see people looking at each other and then they start to laugh.

“Two hours later I have a meeting with the President of Uganda and he said, so tell me Madam Ambassador, what are we going to do about this little rocket man,” Haley said. “Before the week was over, every leader was referring to him as little rocket man. There is something to the president’s nicknames that actually do stick.”

Haley said one of her proudest moments as U.N. ambassador came after the Trump administration decided to move the U.S. Embassy in Israel from Tel Aviv to Jerusalem.

“After we moved the embassy from Tel Aviv to Jerusalem…the entire world condemned us,” Haley said. “And one of the proudest moments I ever had was that American veto telling them you do not tell us where we put our embassy. We’re going to put it in the capital of the country. Jerusalem is the capital of Israel, and that’s what we did.”

And the room filled with applause.

Last week, Haley offered endorsements for other Republicans, including in-person appearances with Sen. Martha McSally of Arizona and Lindsey Graham of South Carolina.

With temperatures set to plunge below zero this weekend, Montana Fish, Wildlife and Parks Bitterroot-based biologist Rebecca Mowry is bracing herself for a crowd at the Darby check station.

A former Bitterroot physician awaiting sentencing on 20 felony drug counts received another reprieve Wednesday after a Missoula judge granted a continuance on lifting the stay that’s kept him out of prison.

Former U.S. ambassador to the United Nations Nikki Haley was the keynote speaker at a campaign event in Hamilton on Monday for Sen. Steve Daines and Montana gubernatorial candidate Greg Gianforte.