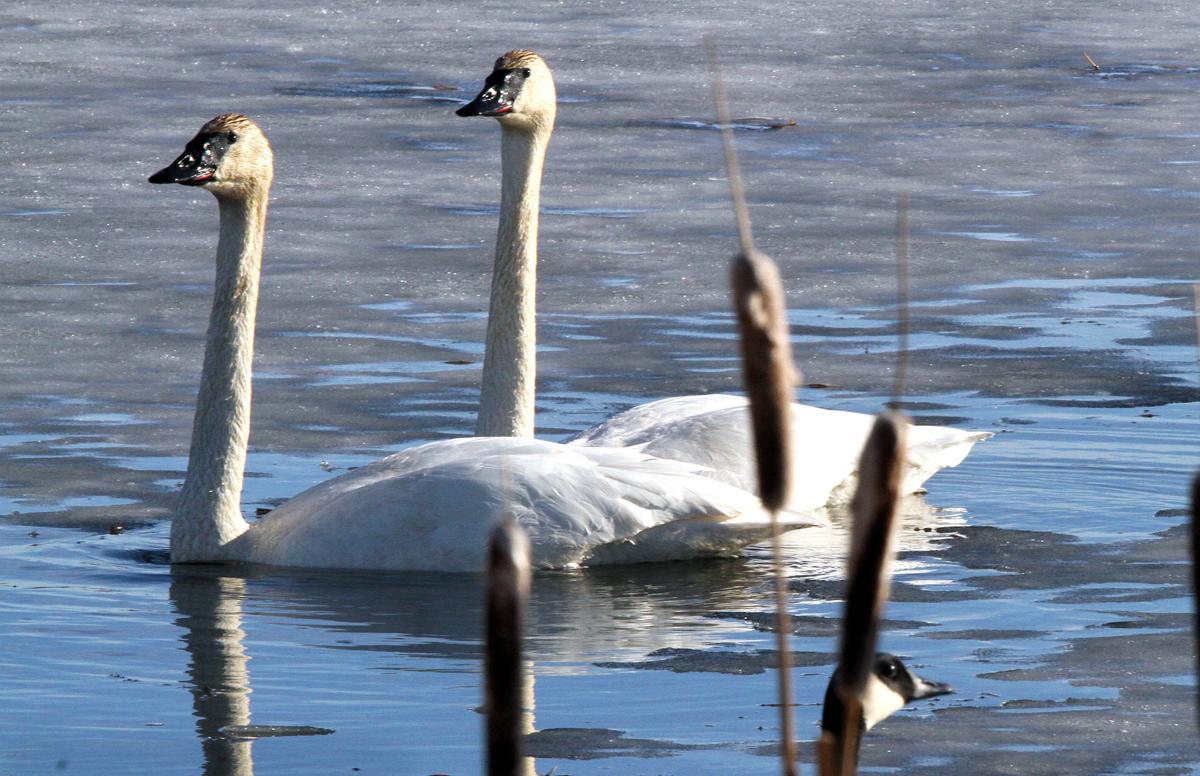 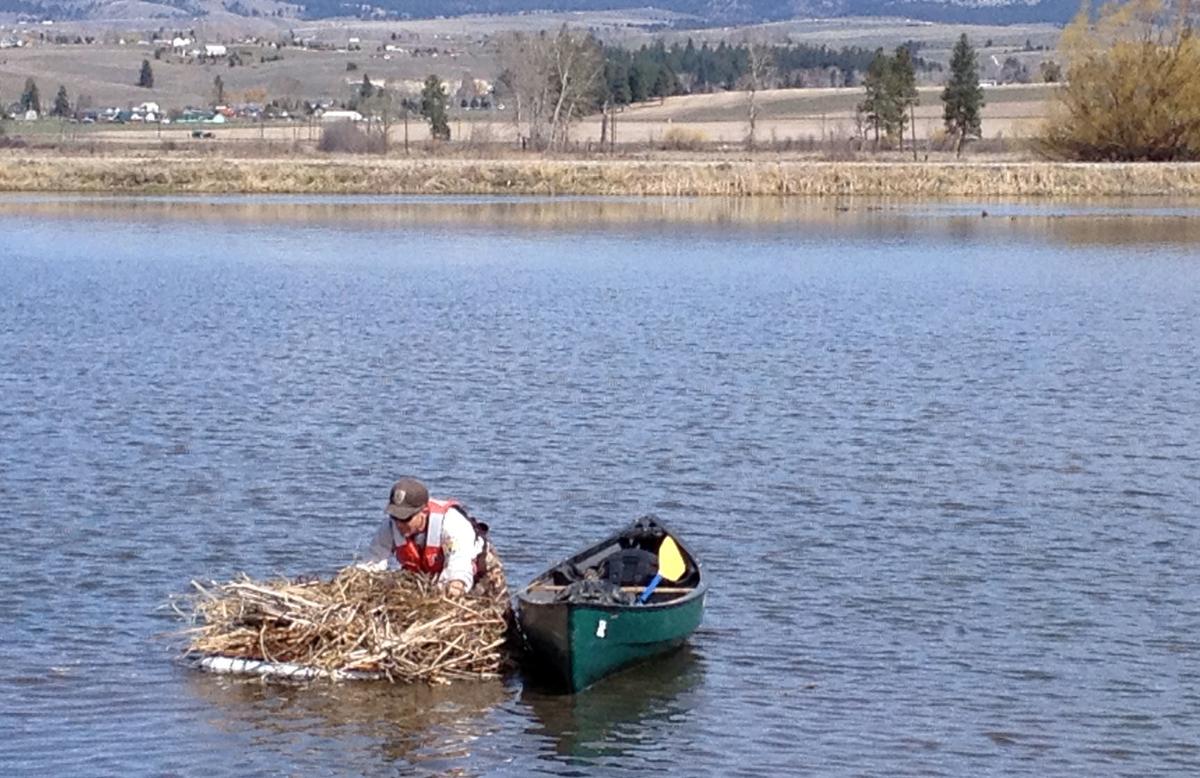 Tom Reed of the Lee Metcalf National Wildlife Refuge works on a floating nesting platform he had hoped would attract a pair of trumpeter swans.

STEVENSVILLE — For as long as most anyone alive can remember, the Bitterroot Valley hasn’t reared a single trumpeter swan cygnet.

On a remote pond at the Lee Metcalf National Wildlife Refuge, a pair of trumpeter swans have built a nest on top of a muskrat lodge.

The refuge’s project leader, Tom Reed, is hoping the nest could produce the first documented trumpeter swan cygnets in the Bitterroot since restoration efforts began decades ago to bring back the huge majestic birds back from the brink after market hunters and feather collectors decimated their populations.

The conservation effort for the nation’s largest native waterfowl is a well-documented success story. With a graceful neck and snowy-white plumage, trumpeter swans can grow up to 6 feet long with a wingspan that can top 10 feet.

In years past, Reed and others have built floating nests on a couple of different ponds in hopes of enticing trumpeters that had started showing up here and there in the Bitterroot.

That looked like it might happen a couple of years ago when two paired, but unfortunately one was illegally killed by a hunter.

Until now, no birds have taken advantage of the built-to-order nests. But Reed, a biologist with a long history of working with the species, spotted something exciting last Saturday in between talking to groups of children attending an annual event at the refuge.

Reed had seen the pair of trumpeters earlier in the week when he was working to clear a water-control structure in the area, but last weekend he noticed that one of the birds was focused on a particular spot.

After taking a closer look with a spotting scope, he saw what appeared to be a nest along the water’s edge.

“It was built one top of a muskrat lodge just like they normally do in the wild,” Reed said.

The nest was in an area closed to people, on the largest pond in the refuge.

After spending five years as manager of the Red Rocks Refuge in southwest Montana’s Centennial Valley, Reed was very familiar with habits of trumpeter swans. Before reintroduction efforts got underway in different areas of the West, Red Rocks Refuge served as the last stronghold for the swans.

The Wyoming Wetland Society help the lead the reintroduction effort. It captured a few birds from Red Rocks and raised their progeny, which were later released in several places, including the Flathead Indian Reservation.

While he can’t be sure, Reed thinks many of the trumpeters that show up in the Bitterroot find their way from there.

“We always assumed that birds would drift down to the Bitterroot and like what they found there," said Dale Becker, Confederated Salish and Kootenai Tribes’ wildlife program director.

Trumpeters from the Flathead Reservation have been spotted in Glacier National Park, the Lost Trail National Wildlife Refuge near Kalispell and in the Eureka area. Becker thinks others may have crossed the northern border and settled in Canada.

“I wouldn’t want to lay claim on those birds in the Bitterroot until we know for sure, but I wouldn’t be surprised if they came from here,” Becker said.

Becker’s monitoring flights this year have yielded few cygnets. Recently he spotted four that were probably two to four days old on a wetland west of Dixon.

“They are kind of late this year,” he said.

Usually cygnets start to appear just after Memorial Day, but this year Becker has only now started to see the first few of the season.

Last year, there were about 60 trumpeter cygnets, from 18 or 19 nests, that fledged in northwest Montana, he said.

With the trumpeter pair nesting on the Stevensville-area refuge, Reed hopes that waterfowl hunters will be a lot more careful of their targets than last year.

On four consecutive Saturdays, hunters illegally killed either a trumpeter or tundra swan on the refuge.

“I can not imagine mistaking a swan for any legal waterfowl,” Reed said. “I think if you can’t, you shouldn’t be hunting. There’s nothing in the avian world that comes even close to the size of these birds.”

Becker said hunters illegally killing swans has been an issue in other areas, too.

“We have had a lot of bumps and bruises along the way,” he said. “There have been a lot of disappointments. There have been birds that we had counted on breeding found dead under a power lines.

“It’s always been a numbers game,” Becker said. “The prize that we’ve always kept our eye on was to try to outproduce our losses. We’ve been doing that. We’ve seen increases in numbers each year.”

Becker has encouraged the state Fish, Wildlife and Parks Department to adopt a trumpeter and tundra swan test for waterfowl hunters to help reduce the accidental shooting of the birds.

“It seems to fall on deaf ears in Helena,” he said. “We have plastered the information in our (regulations) in big bold print and done as much PR as possible. You wouldn’t think it would be an issue.”

“Hunters just need to do better,” Becker said. “These are not snow geese. They are a whole lot bigger.”

Reed plans to monitor the trumpeters from a distance. He’ll do whatever he can to keep the pond at a depth that doesn’t threaten the nest.

“Trumpeters have been using the refuge for the eight years that I’ve been here,” Reed said. “In the last few years, a handful have stayed all year. It would be special if we this year we could see cygnets, too.”

Robert White III didn’t have a whole lot of hope before he came to Trapper Creek Job Corps.

Although the Anaconda Job Corps site has gotten a reprieve, the fate of the Trapper Creek program in Darby remains uncertain.

The Bitterroot Valley will have its opportunity to have its voice heard on the future of Trapper Creek Job Corps Tuesday, June 11.

Tom Reed of the Lee Metcalf National Wildlife Refuge works on a floating nesting platform he had hoped would attract a pair of trumpeter swans.