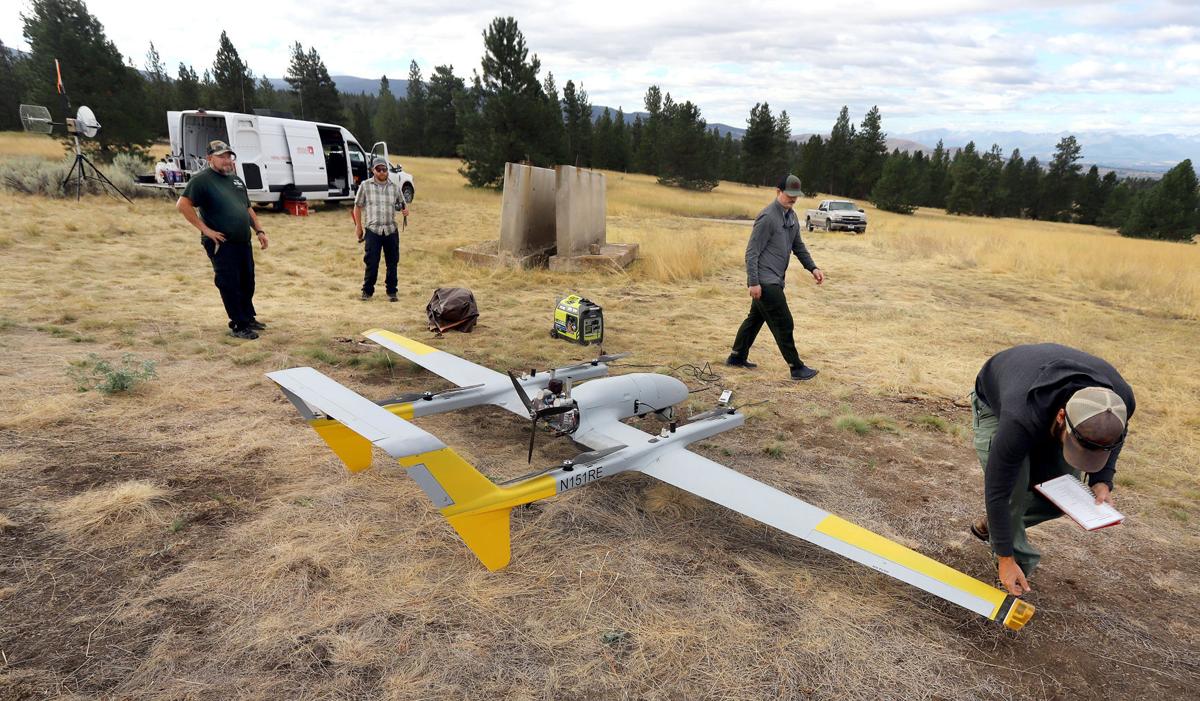 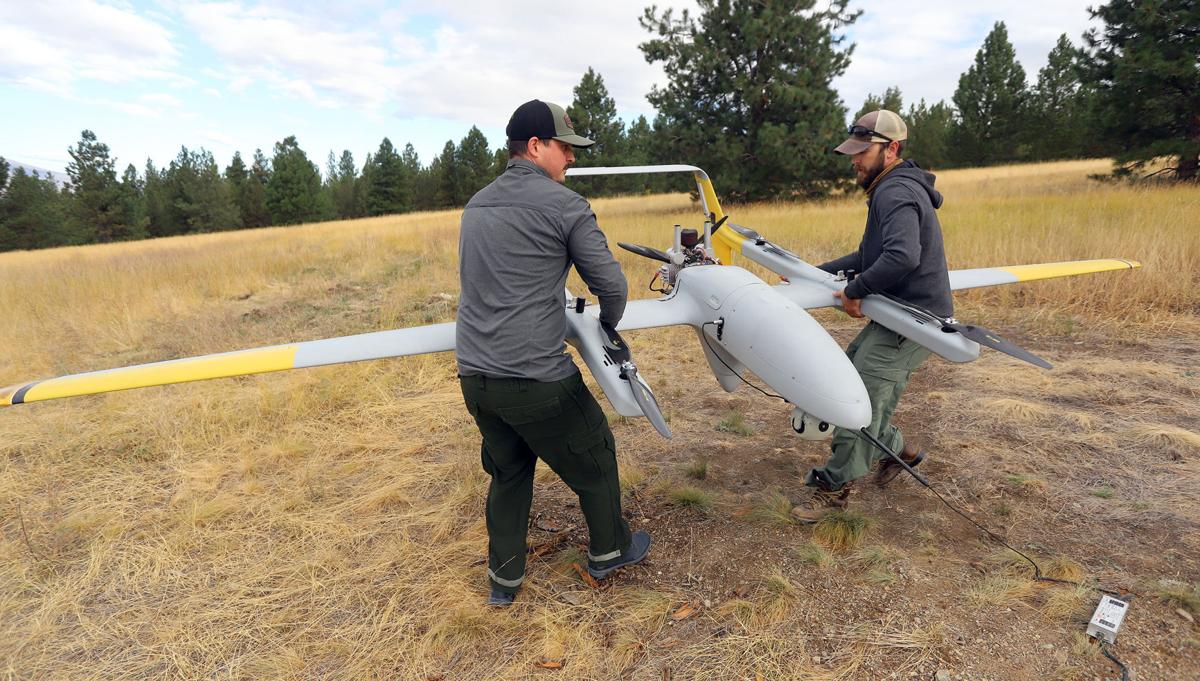 Bridger Aerospace's Alexander Logan and Weston Irr move the drone to the area where it was launched Tuesday morning. The high-tech drone has spent four days over the Cinnabar Fire burning in the Welcome Creek Wilderness. 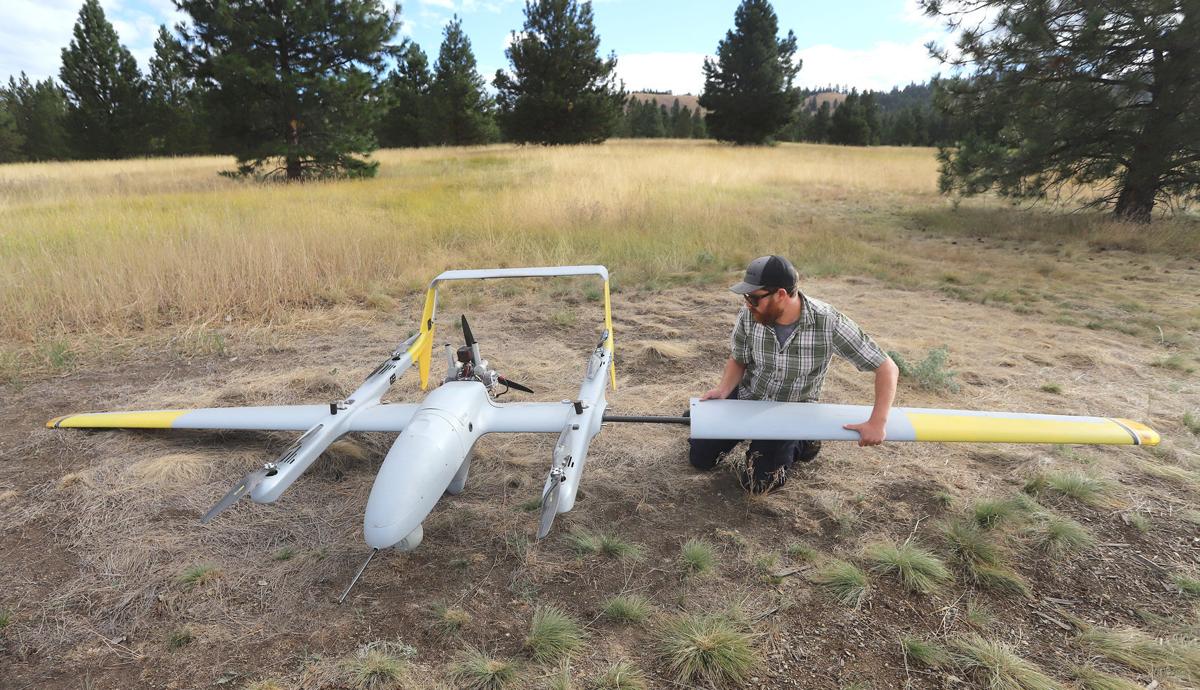 Bridger Aerospace's John Wantulok attaches a wing to a drone used to gather information about the Cinnabar fire on the Lolo National Forest. 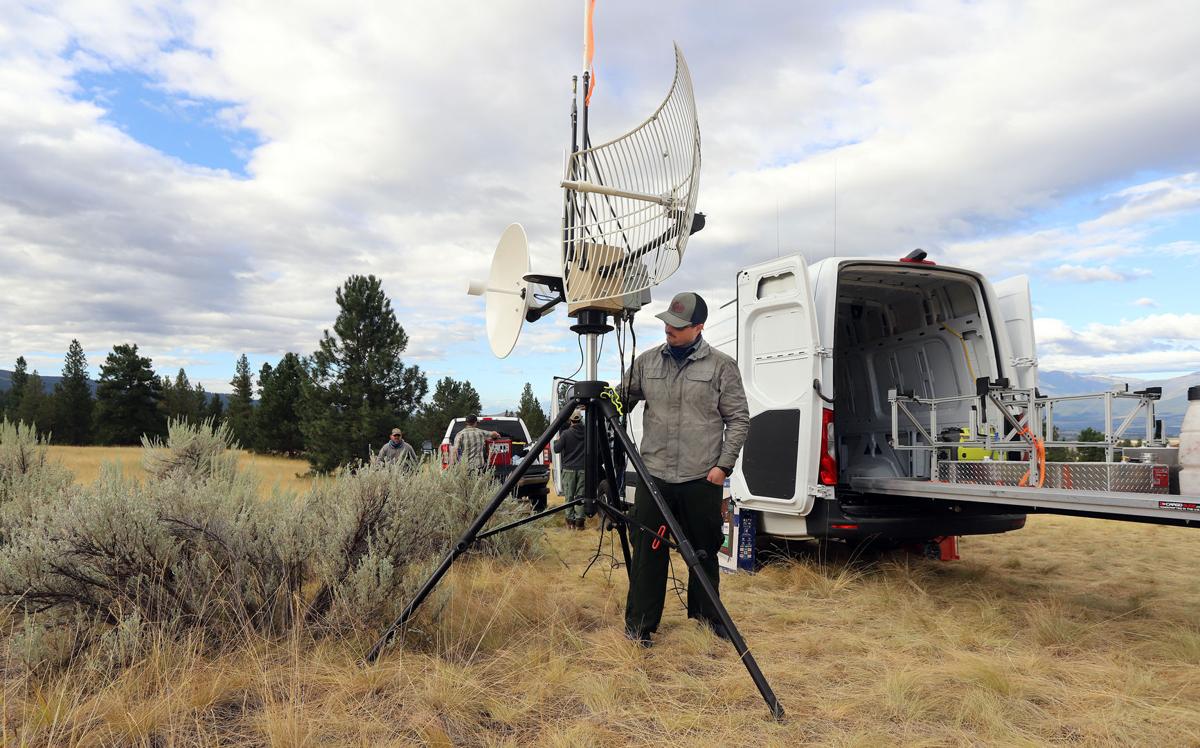 Alexander Logan of Bridger Aerospace works on setting up equipment to monitor information live-streamed from a drone that flew over Cinnabar Fire burning on the Lolo National Forest.

The Cinnabar fire burning in the Welcome Creek Wilderness put up a plume of smoke thousands of feet in the air Sunday.

Stevensville District Ranger Steve Brown could see it from the backyard of his Stevensville-area home.

“Our main concern with that fire is keeping it from moving onto the Bitterroot side,” Brown said. “The fire looked like it was right there.”

A few minutes on an internet Zoom meeting told him otherwise.

A video captured by a high-tech drone owned and operated by Belgrade-based Bridger Aerospace showed the fire was burning through a thick strip of fuel well within the wilderness boundaries. The video also showed that once the fire reached the top of the draw it would run out of unburned fuel.

“You could see exactly where the big plume was coming from on the video,” Brown said Tuesday. “It wasn’t burning along the edge of anything. It wasn’t threatening to get away. You could see there wasn’t any fuel for it to continue once it hit the top.”

“I knew it was going to die out once it got there,” he said. “That’s exactly what it did.”

Brown thinks the drone technology can be a game-changer when it comes to managing fire on the landscape.

Capable of flying at 12,000 feet over a fire for up to 12 hours at a time, the drone can transmit both regular and infrared video in real-time to fire managers both in their camps and on the fire line.

“In terms of information that it can gather and the ability to share that information quickly, I personally think it’s a game-changer,” Brown said. “It also reduces the risk to personnel both in the air and on the ground.”

On Tuesday morning, the four-person Bridger Aerospace crew set up their mobile drone base on the state’s Threemile Wildlife Management Area. All four were veterans. Two had served as drone pilots in the military.

This is the third year of the company’s drone program. It’s the second year for the current drone that couples electric engines that power the helicopter-like blades used for take-off and landing with a gasoline engine that fuels the propeller for airplane-like flight. The drone is equipped with zoom cameras mounted on a custom gimbal, or pivoted support, that keeps the images steady.

Beyond giving firefighters a bird’s eye view of a fire, the drone is flown in a series of grids that provide information necessary to create 3D maps of the landscape that can be used to determine where fire lines should be constructed and help firefighters avoid dangerous areas.

Alexander Logan said the drone can fly in conditions where a fixed-wing aircraft can’t.

“Our biggest challenge is icing,” Logan said. “We don’t fly into the clouds or anytime there is visible moisture. With the infrared camera, we can penetrate through the smoke.”

Flying over a fire is filled with risk. A helicopter pilot was killed in Oregon recently.

Brown said the high-tech drones can reduce that.

“It’s a very risky business any time there’s someone up in the air,” Brown said. “When you use a fixed-wing, only the observer gets to see the fire. They relay that information to everyone else. When a drone is recording live-stream video, everyone in fire camp gets to see it. Anyone that you want to share the link with can see it, including stakeholders and community members.”

“Everyone who sees a fire column thinks there is just an inferno everywhere,” Brown said. “With this, you can put into context for folks and set their minds at ease in terms of the general public.”

More importantly, the drone makes it so people don’t have to be exposed to dangerous situations either on the ground or in an aircraft.

The video can be streamed to tablets carried by firefighters on the ground.

“You can beam those pictures right to the hands of the guys on the line,” Brown said. “With that information, they can say ‘hey, watch out. It’s starting to build right there” or “hey, that hotspot you’re looking for is just a few meters away.’”

The biggest limiting factor for the use of high-flying drones is FAA regulations. Most drones are not allowed to fly over 400 feet from the ground. To use the larger drones, a temporary flight restriction area has to be designated by the FAA.

In the future, Brown can see drones play a larger role in detecting fires in the forest.

A couple of weeks ago, the Bitterroot National Forest had 184 lightning strikes from a single storm, which started eight fires.

“That was a lot of helicopter time used in locating those,” Brown said. “If you could fly a drone over that area with an infrared camera, you could pick up those places where there was heat here and there.”

Guided by GPS coordinates, firefighters can be dispatched to that specific area.

Brown said the Lake Como fire is a good example of how the technology could work.

“How long was that burning up there before it started putting up enough smoke so we could actually locate it,” Brown said. “By that time, the wind was blowing. It was 90 degrees. Humidity was low. And it was off and running. Thankfully, we were able to catch it with an aggressive air attack.”

“The money spent on air attack would have been a fraction of what it would have cost had we been able to find it early using a drone,” he said.

After earning a master’s degree in 2002, Brown has spent his career working in remote sensing.

“It’s exciting to see this technology mature and become really useful,” Brown said. “The stuff they are doing now is the sort of stuff we dreamed about back then.”

Worried that their voices aren’t being heard in town affairs, a group of protesters took to the streets Thursday night in Stevensville to air their grievances in a very public way.

A Missoula man who allegedly drove 95 mph through Corvallis Sunday morning has been charged with felony counts of criminal endangerment and criminal mischief.

A new indoor agriculture business in Hamilton is looking to flip the traditional produce model on its head.

Board pushes back meeting on controversial large Stevensville subdivision

Stevenville's Planning and Zoning Committee decided Thursday to push back its first public meeting on a proposed large subdivision east of Stevensville until Oct. 7. Public hearings before the town council have been postponed.

Storm brings wind, not much moisture to Bitterroot Valley

A fast-moving cold front Monday that swept through the Bitterroot Valley brought lots of wind and just enough moisture to keep the last few wildfires burning in surrounding national forests from flaring out of control.

Bridger Aerospace's Alexander Logan and Weston Irr move the drone to the area where it was launched Tuesday morning. The high-tech drone has spent four days over the Cinnabar Fire burning in the Welcome Creek Wilderness.

Bridger Aerospace's John Wantulok attaches a wing to a drone used to gather information about the Cinnabar fire on the Lolo National Forest.

Alexander Logan of Bridger Aerospace works on setting up equipment to monitor information live-streamed from a drone that flew over Cinnabar Fire burning on the Lolo National Forest.