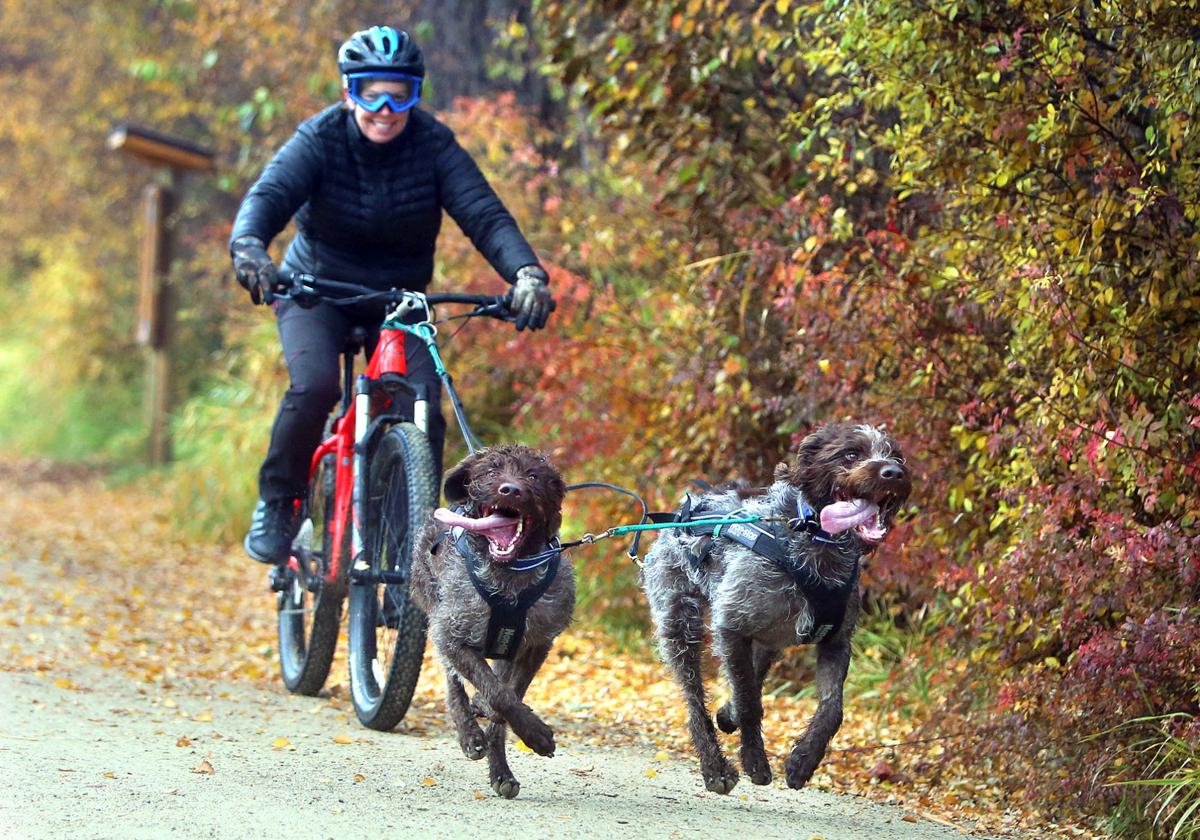 Teresa Petterson of Corvallis is all smiles as her two wirehaired pointing griffons enjoy their run in Hamilton's Hieronymus Park. Petterson is one of the organizers of the inagural Western Montana Dirt Derby at Luebrecht Experimental Forest on Nov. 10 and 11, that will include bikejor races. 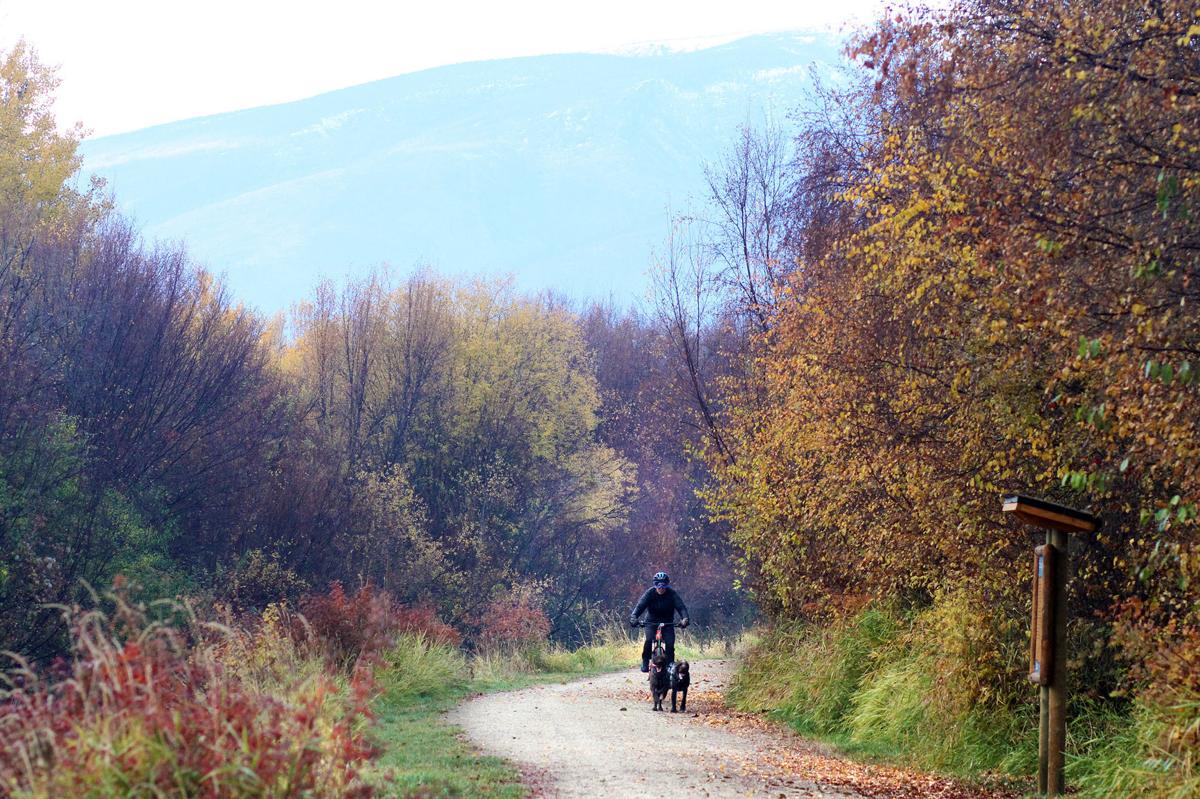 There’s a threat of rain in the air, but Finis and Swix couldn’t care less.

The pair have their eyes glued on the red mountain bike perched against a nearby post.

Equipped with comfy harnesses across their broad, wire-haired chests, the two keep close watch on a goggled and hard-hat-equipped Teresa Petterson as she makes the last few adjustments to the shock cord attached to the front of her bike.

One by one, she hooks the cord to the excited wire-haired pointing griffons’ harness before hurriedly climbing onto her bike at the beginning of the trail at Hamilton’s Hieronymus Park.

And then she begins to count down from five.

As soon as Petterson reaches zero, the gravel flies as her two dogs literally grin as they begin their morning dash down the trail lined with bright colors of fall.

“On by,” Petterson shouts as the flying trio pass their first human obstacle on the trail.

Her dogs don’t miss a step as they hurry on past.

A couple of weeks from now, Finis and Swix will get their chance to compete in what’s believed to be the very first sanctioned dryland racing event in Montana.

The Bitterroot Mushers and Montana Mountain Mushers will host the inaugural running of the Western Montana Dirt Derby dryland race on Nov. 10 and 11, at the Lubrecht Experimental Forest just off Highway 200 East, near Greenough, Montana.

Long popular in Europe, dryland racing is a growing sport in the United States.

Brandi Williamson of Corvallis participated in her first dryland race last fall when she competed in the four-dog cart race and the foot-powered canicross in a nearby state.

“I really liked it a lot,” Williamson said. “I decided I wanted to compete in canicross with a goal to make it to the world competition.”

The only way to earn a spot of the U.S. canicross team was to compete in sanctioned races.

There are four different types of canine-propelled races that make up a dryland event.

There are carts that are often used by traditional dog mushers to train their dogs during the snowless times of the year. Then there’s bikejoring, one of Petterson’s favorites. Some racers use scooters that can be hitched to a single dog or a team of two.

The most simple is canicross.

Competitors hook a line around their waist and the other end to their dog. And then the team runs as fast it can.

“I always thought that I had invented canicross,” Williamson said. “I had dogs that I was always fighting when they were on a lead. I decided that I would harness all that energy and run behind them … And then I realized there was a whole sport based on just that.

“It’s been around for a long time,” she said. “It’s very popular in Europe. It’s starting to pick up steam here.”

Williamson said it’s a good way to stay in shape and certainly come up with a new personal best for the time it takes to run a mile.

“I’ve clocked myself at 4.25 minutes,” she said. “I usually slow down a bit after that first mile … If you’re doing it right, you end up having a much larger stride with more time in the air as you set your pace with them. It’s certainly easier to run faster.”

The organizers of the Western Montana Dirt Derby hope to attract a crowd of people interested in learning new ways to get some exercise for both themselves and their canines while having fun doing it.

The plans call for hosting a novice class to give everyone a chance to try out the sport.

“We’re really hoping to get more Montana mushers involved,” Williamson said. “We have a number of Canadians coming for this first race and quite a few from Montana. I think there’s quite a bit of opportunity in Missoula and the Bitterroot to get more people involved in the sport. You see a lot of people out with their dogs running and biking.”

With its ample parking and numerous trails, Lubrecht is a good location for what the organizers hope will be an annual event. Williamson said Sonya McCloney of Lolo has put a lot of work into ensuring a good couple days of racing.

“This is a good course,” Williamson said. “Some courses have trails that are kind of tight through the trees. People won’t have to worry quite so much about their dog going on one side of the tree and them on them on the other.”

Nicki Arndt of the Bitterroot Mushers said all sorts of different breeds of dogs participate in the sport.

“The biggest problem that a lot of people have is their dog pulls them on their leash,” she said. “So put them on a harness and start running behind them and that problem is solved. Every dog needs a job. This is a good job for a lot of them.”

The Bitterroot Mushers have already seen just how popular a dog-driven event can become. In February, their Darby Dog Derby will celebrate its 12th year.

The hope is the dirt derby will find that same success.

There is still a need for volunteers.

“If people want to learn more about the sport, volunteering is a great way to do that,” Arndt said. “There will be plenty of people there to give tips and pointers.”

To learn more about the race or to sign up to participate, people can go to www.bitterrootmushers.org.

On Tuesday morning, a small group gathered in a circle at the edge of a charred mobile home around a small piece of upturned dirt.

MacLean William Kayser will get a second chance to make his life right.

If everything comes together as hoped, the grand opening of Hamilton High School’s new athletic complex could happen Saturday with a ribbon cu…

Teresa Petterson of Corvallis is all smiles as her two wirehaired pointing griffons enjoy their run in Hamilton's Hieronymus Park. Petterson is one of the organizers of the inagural Western Montana Dirt Derby at Luebrecht Experimental Forest on Nov. 10 and 11, that will include bikejor races.