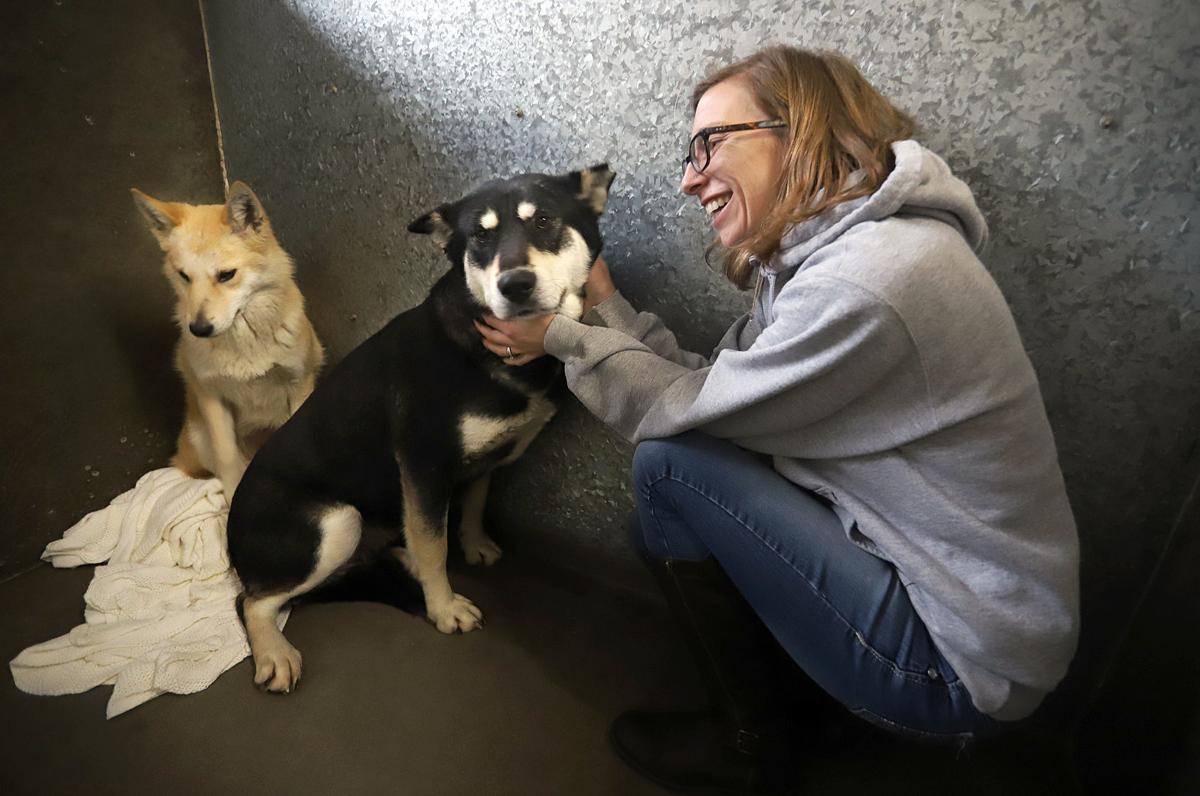 Bitter Root Humane Association operations manager Cyra Saltzman spends some time with the two youngest huskies that are now available for adoption. Saltzman said Thursday that nine of the 39 huskies rescued about three weeks ago are now ready for a new home. 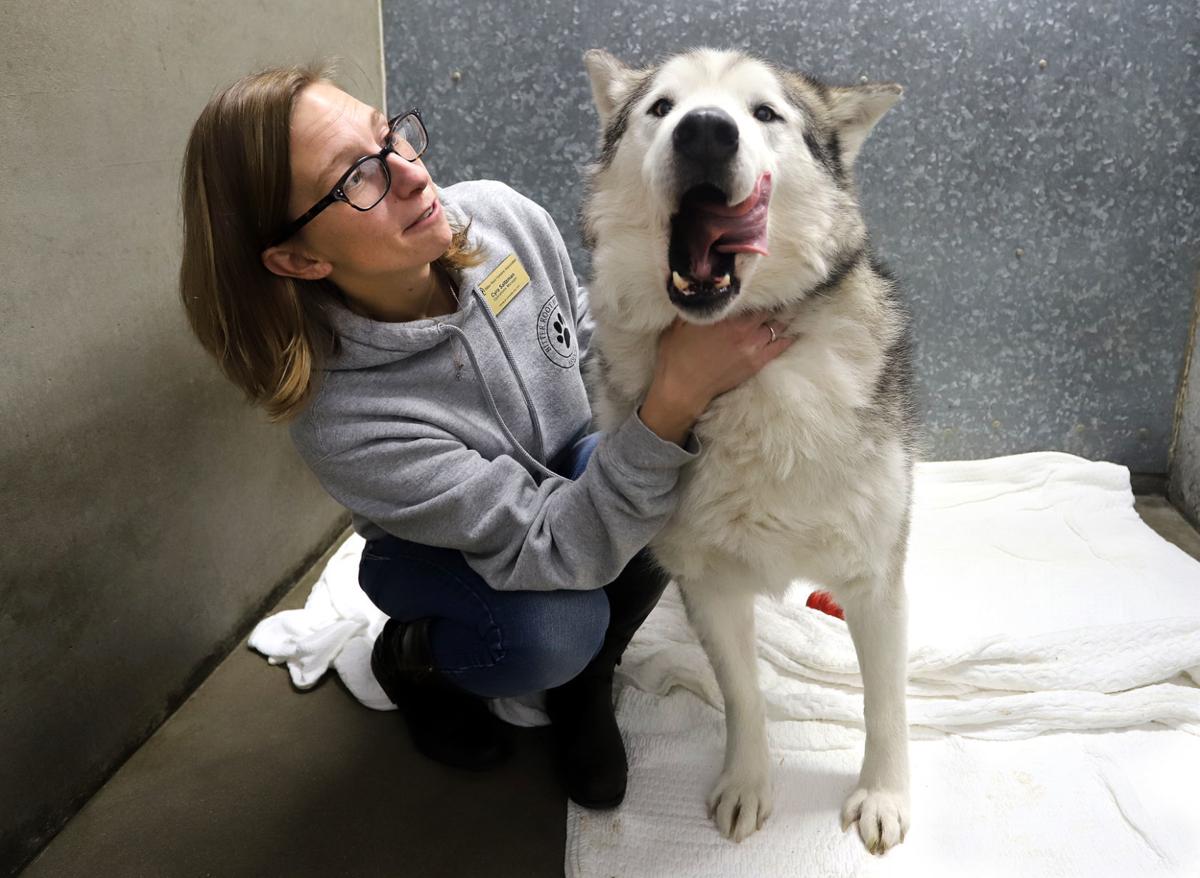 Genesis, a 10-year-old husky, is the oldest of nine huskies that are looking for a new home at the Bitter Root Humane Association shelter in Hamilton. The shelter's operations manager, Cyra Saltzman, said anyone interested in adopting one of the dogs needs to fill out an application.

Bitter Root Humane Association operations manager Cyra Saltzman spends some time with the two youngest huskies that are now available for adoption. Saltzman said Thursday that nine of the 39 huskies rescued about three weeks ago are now ready for a new home.

Genesis, a 10-year-old husky, is the oldest of nine huskies that are looking for a new home at the Bitter Root Humane Association shelter in Hamilton. The shelter's operations manager, Cyra Saltzman, said anyone interested in adopting one of the dogs needs to fill out an application.

The first nine of the 39 huskies rescued about three weeks ago by the Bitter Root Humane Association are now ready for adoption.

The Hamilton shelter’s operations manager Cyra Saltzman said the rest of the dogs are still being monitored and evaluated, including two litters of puppies.

Saltzman expects that most of the dogs will eventually be homed at rehabilitation centers where they can be trained for possible adoption at a later time.

The Hamilton shelter worked with local law enforcement and volunteers to trap the huskies that had been abandoned on a property in the Soft Rock area east of Corvallis. Some of the dogs had been living on their own for at least a couple of weeks before they were captured and brought into the shelter.

Behavioral specialists have been working to determine which dogs were ready for adoption.

“It’s been great to see some of these dogs come out of their shell,” Saltzman said. “Three weeks ago, some of these dogs wouldn’t let us get anywhere near them, and now they are wagging their tails when they see us. When we first got them, we weren’t sure if we were going to be able to rehome any of them.”

The shelter has been a bit overwhelmed by the sheer number of people stepping forward to help. Saltzman said they’ve decided to step back from an initial request for volunteers to help socialize the dogs after finding it too challenging to manage.

“We are working now with a good team of behavioral specialists who have helped us in determining which dogs can be placed in a home,” she said. “If people still want to volunteer, they can come in and learn about our other needs.”

They currently have eight huskies that range in ages from about 10 years to less than a year housed in the inside kennels that are ready for adoption. Another female will be ready to adopt after her puppies are weaned.

The indoor kennels came open after other area shelters offered to take some of the 17 dogs the Hamilton shelter had when they rescued the huskies. Saltzman said some of those 17 ended up getting adopted by people who came to the shelter to learn about the huskies.

“That gave us some additional space, which allows us to work one-on-one with the huskies,” she said. “Some of those dogs we had at the time hadn’t been considered by anyone before this happened, and they ended up getting adopted into good homes. It’s been crazy.”

The phone isn’t ringing quite as often nowadays, but Saltzman said she still hears from people from all parts of the country offering help and advice.

The shelter has received a good amount of financial help since the huskies arrived, but Saltzman said they’ll probably need some additional funding when it comes time to transport dogs to rehab centers.

Anyone interested in adopting one of the available huskies should take time to research the breed before taking that step, Saltzman advised.

“They have a lot of energy,” she said. “They will need a fenced yard and should be run daily. They need to have a job so they can get all that energy out … People are going to need to be patient with them. They are probably not going to be a dog that comes and sits down on the couch with you after work.”

Saltzman also urged people to be patient with the shelter.

They are still receiving a lot of phone calls and email inquiries about the huskies.

“People have a soft spot for animals that have been abused or abandoned, and everybody wants to help,” she said. “We appreciate that. We just want people to know that it could take us a while to get back to them. We are asking for their patience as we work through this.”

The puppies that were rescued remain in foster care as their medical conditions are assessed. Saltzman doesn’t expect that they will be ready for adoption until the end of January.

Anyone interested in adopting one of the dogs needs to fill out an application.

“Even though they’ve been deemed adoptable, people need to remember that they’ll still need training and a lot of work. All of them have been spayed, neutered and vaccinated by the amazing volunteers at Fox Hollow. They put in some long days to make that happen. We really appreciate all their help.”

Before a full house of more than 100 people, the Hamilton Board of Adjustments began taking public input Monday evening that it will use to shape its decision on the fate of one of the town’s most historic churches. Their decision is not going to be an easy one.

No surveys. Faster-loading pages. Join for $3!