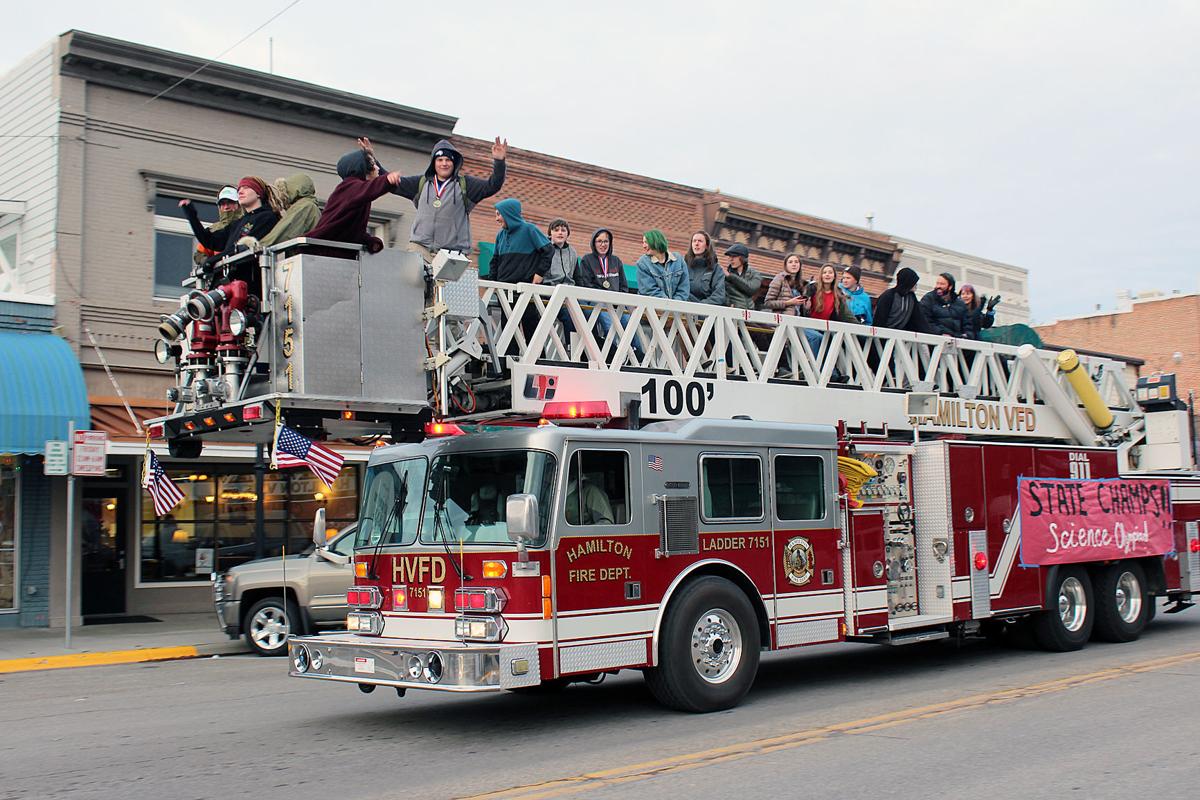 The Hamilton High School Science Olympiad team took first place in the state-wide competition last week and rode through town on a fire truck in 27 degrees on Monday. 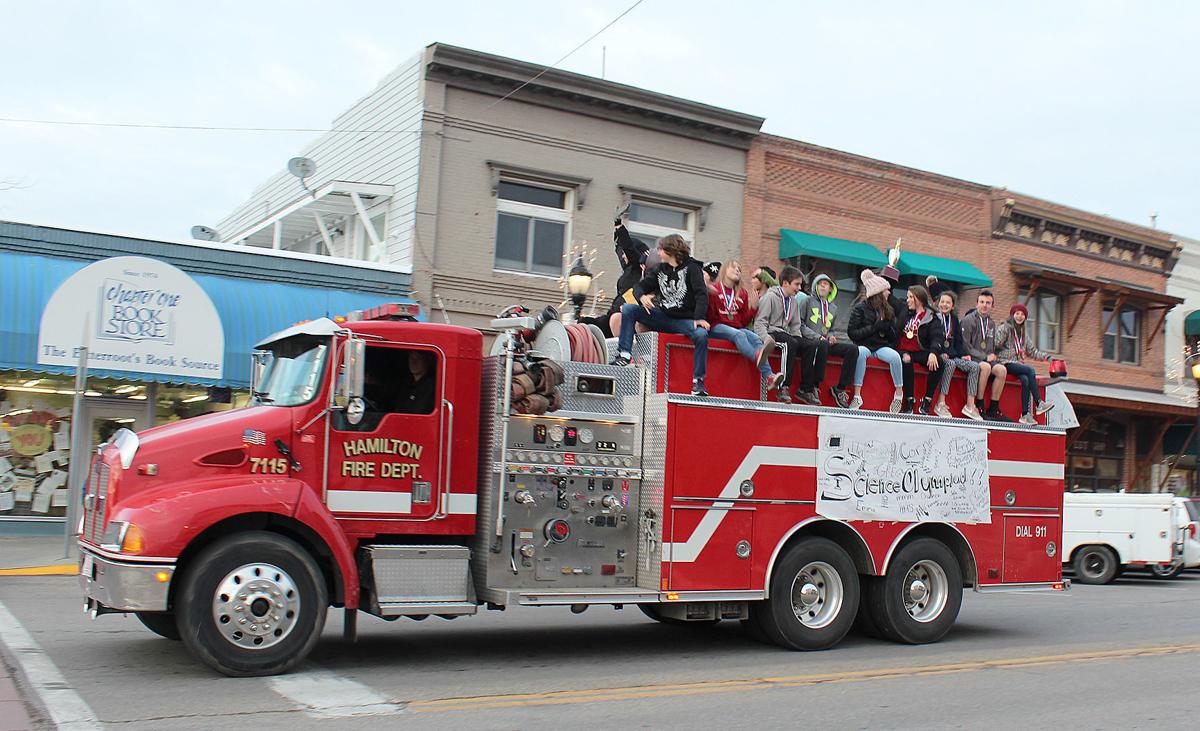 Hamilton Middle School Science Olympiad team took first place in the state-wide competition and rode through town on a fire truck on Monday. 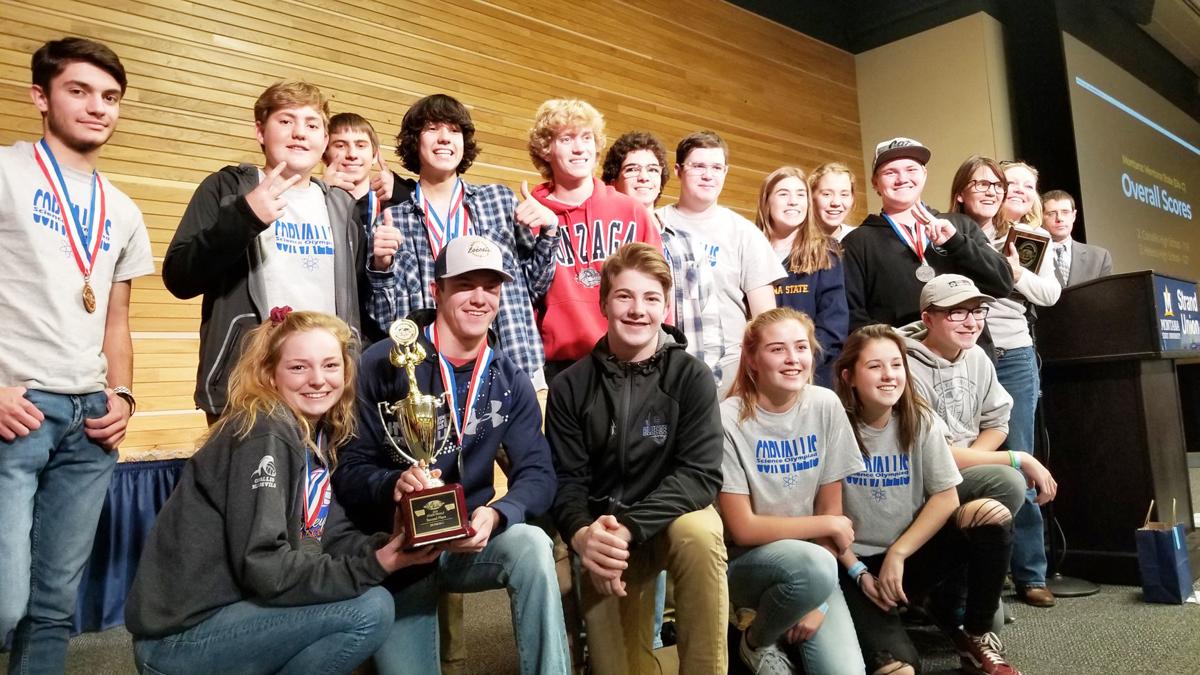 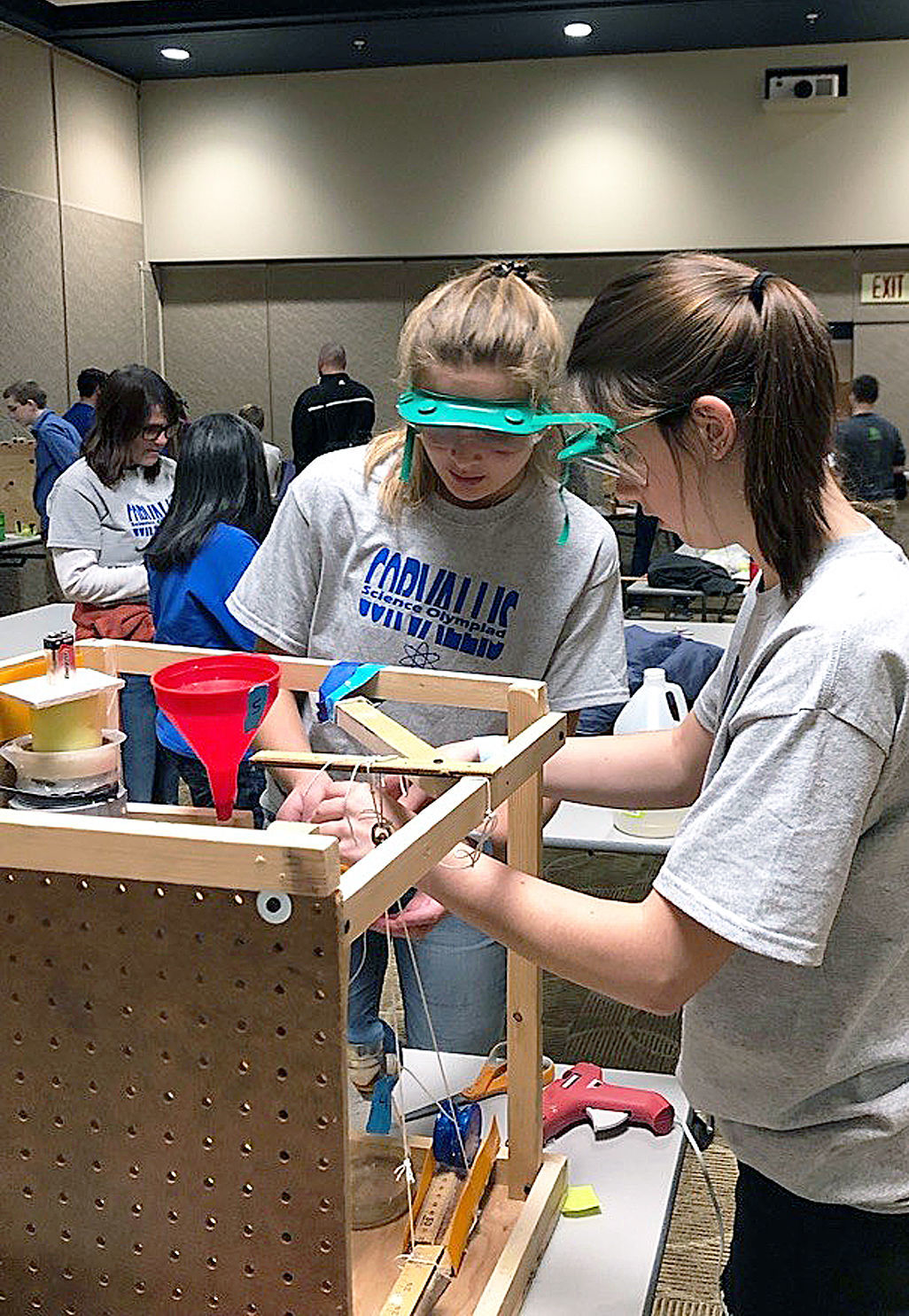 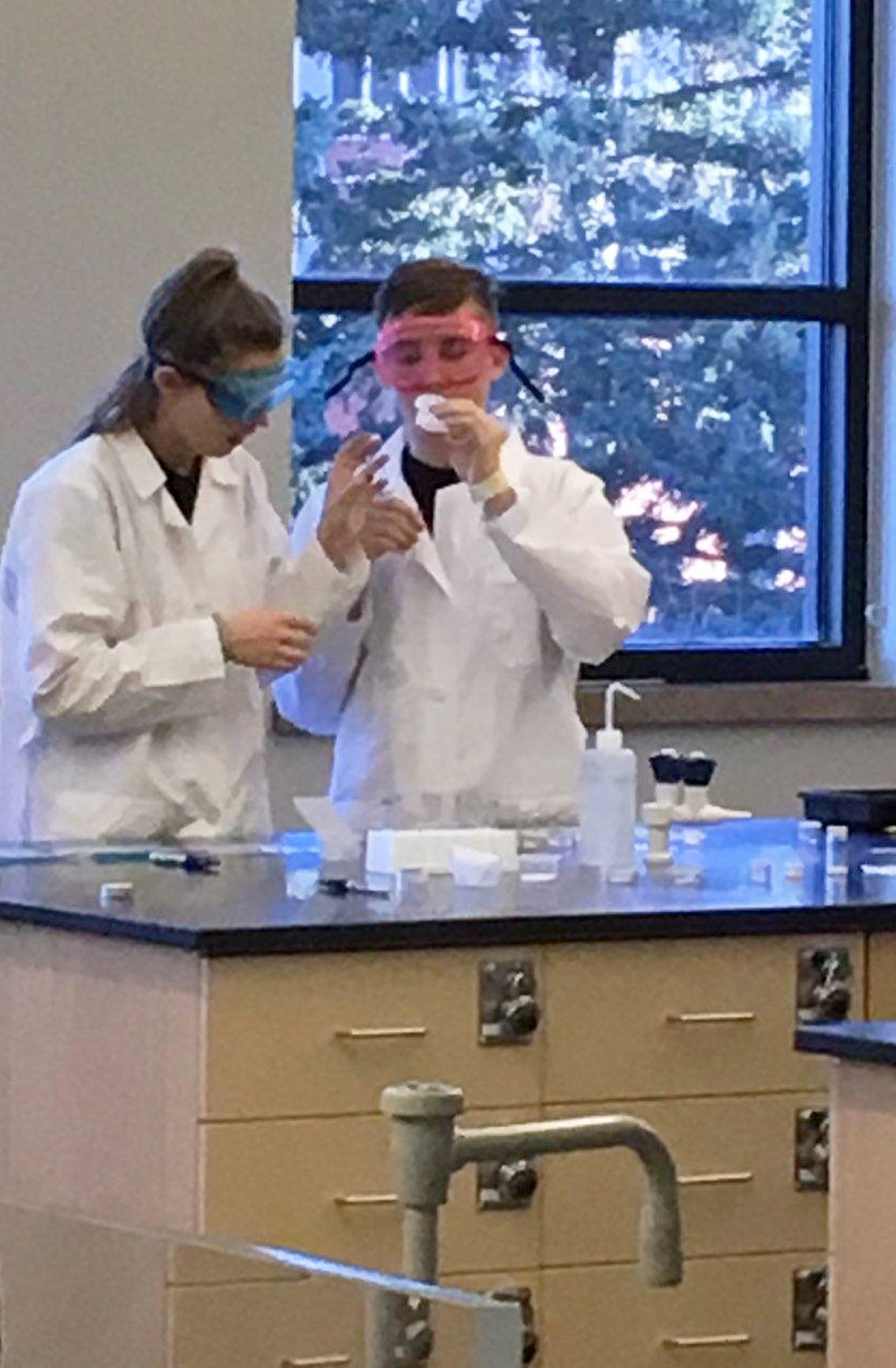 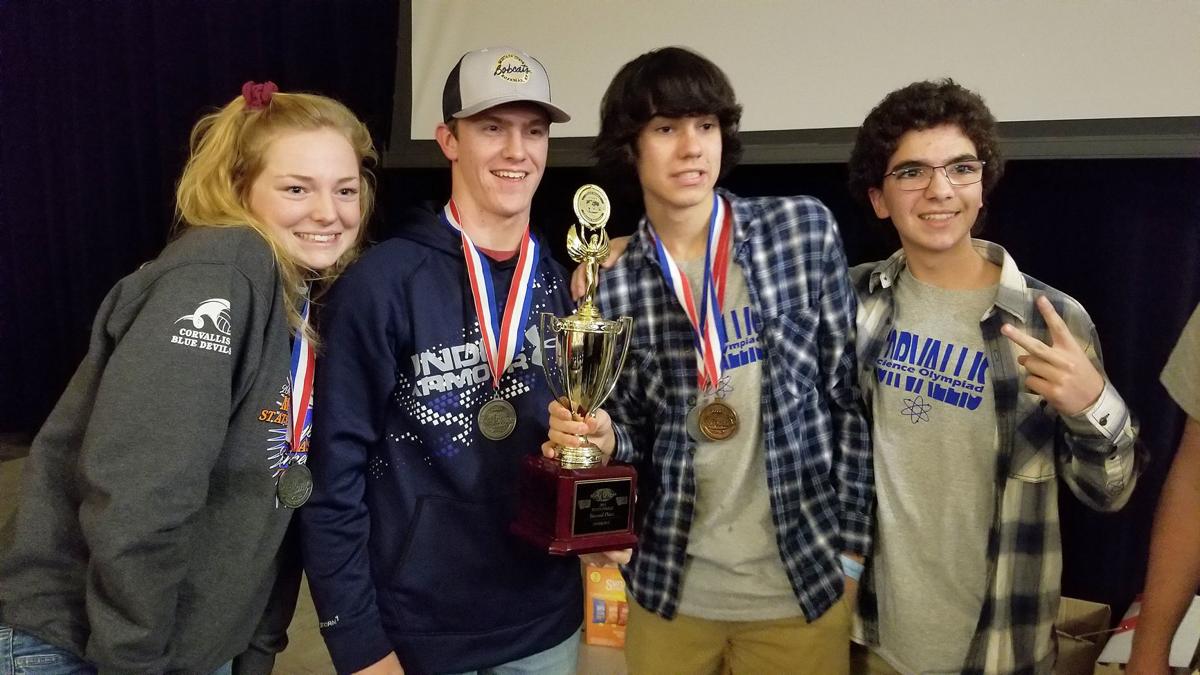 HHS coaches Tom Schmit, Marie Antonioli and Dietrich Perchy said they were pleased with the performance of students in the Bitterroot Valley.

“What makes it pretty special is that Corvallis took second and the Bitterroot Valley really dominated the competition,” Schmit said. “It was pretty cool.”

Schmit said it was amazing year for Hamilton High with the strongest overall team score he can recall thanks to the core group of experienced upperclassman and younger team members who stepped up to contribute.

“It was also so special to share the podium with the Hamilton Middle school gold medalist team,” Schmit said. “It’s extremely unusual to have a school district ‘sweep’ state championships at both the middle school and high school level.”

“It allows me to explore topics that I am passionate about such as protein modeling,” he said. “It is an experience that I will definitely miss. “

“It has helped me to develop my problem solving skills,” he said. “It also allowed me to explore potential careers to pursue in the future by providing me chances to build relationships with people that have similar interests.”

“It gave me an opportunity to be self-directed in my academics more than I had in the past,” she said. “I’m very proud to be a part of this great team.”

Coach Antonioli praised the dedication of her team.

“These kids set a team goal to win and they put in the time and brainpower that it took to dominate the tournament this year,” she said. “We are so incredibly proud of them.”

HHS and HMS will be heading to national competition in late May at Cornell University in Ithaca, New York. Fundraising is underway and donations are welcome at Science Olympiad Team c/o Hamilton High School, 327 Fairgrounds Road, Hamilton, MT 59840.

Coaches are Laura Carrasco and Tracy Dickerson agreed it was a great team to coach.

“The kids are bright, motivated and truly a pleasure to work with,” Carrasco said. “I am so proud of the varsity finishing second and both teams doing so well overall.”

The team had 31 dedicated competitors.

“They started working months ago and many kids put in ridiculous hours at home and school,” Carrasco said. “Planes that flew horribly at first ended up flying beautifully because problem solving and hard work are the key to their success.”

“We had nine seniors on the team, seven varsity and two junior varsity, and they will be missed,” Carrasco said. “A team doesn't do well without all event teams doing well so congratulations to all Science Olympiad Team members.”

CMS Principal Rich Durgin said it is exciting to see students investing hard work to prepare for their events and compete at a high level.

“I have no doubt that many of these students will choose to pursue careers in science or engineering as a result of their Science Olympiad experience,” Durgin said. “It is a terrific program, and I am extremely proud of our middle school team.”

Powell said her team had commitment.

“Our students came in fired up this year,” she said. “We had a returning team of 13 eighth graders who knew the commitment expected to do well at the state level. All twenty five students spent countless hours studying, running trials, building and re-building.”

“During competition these students impressed me with their ability to stay calm and deal with adversity,” Powell said. “They are an incredible group of students and a pleasure to coach.”

“Year after year, Corvallis Middle School’s Science Olympiad team places in the top two,” she said. “This is a testament to the commitment from the students to put in the work to perform well. I couldn’t be more proud of these students.”

“They are learning commitment, perseverance, time-management, organizational skills and cooperation,” she said. “To celebrate their accomplishments at the state competition is just the icing on the cake – especially when you have seen their journey to get there.”

Border to border: Corvallis stagecoach will traverse the state

Ephraim Strain of Corvallis can remember a day when he and his siblings dreamed about getting a stagecoach and driving it from one end of Montana to the other. Now he's doing it.

Hamilton turns out to celebrate graduates

With the bulk of the ballots counted in Ravalli County, it appears Rep. Theresa Manzella will easily win the closely watched race for Senate District 44.

A Hamilton man was charged Tuesday with two felony counts in connection with an alleged threat to commit a mass shooting.

Public Services Librarian Nansu Roddy retired after 35 years of service to the patrons of the Bitterroot Public Library.

A federal judge dismissed a lawsuit Tuesday that sought to close a road used to access the Bitterroot National Forest south of Darby.

The West Fork Ranger District has announced that road work will soon begin on the Magruder Road Corridor in Idaho. The project could begin as …

The Hamilton High School Science Olympiad team took first place in the state-wide competition last week and rode through town on a fire truck in 27 degrees on Monday.

Hamilton Middle School Science Olympiad team took first place in the state-wide competition and rode through town on a fire truck on Monday.