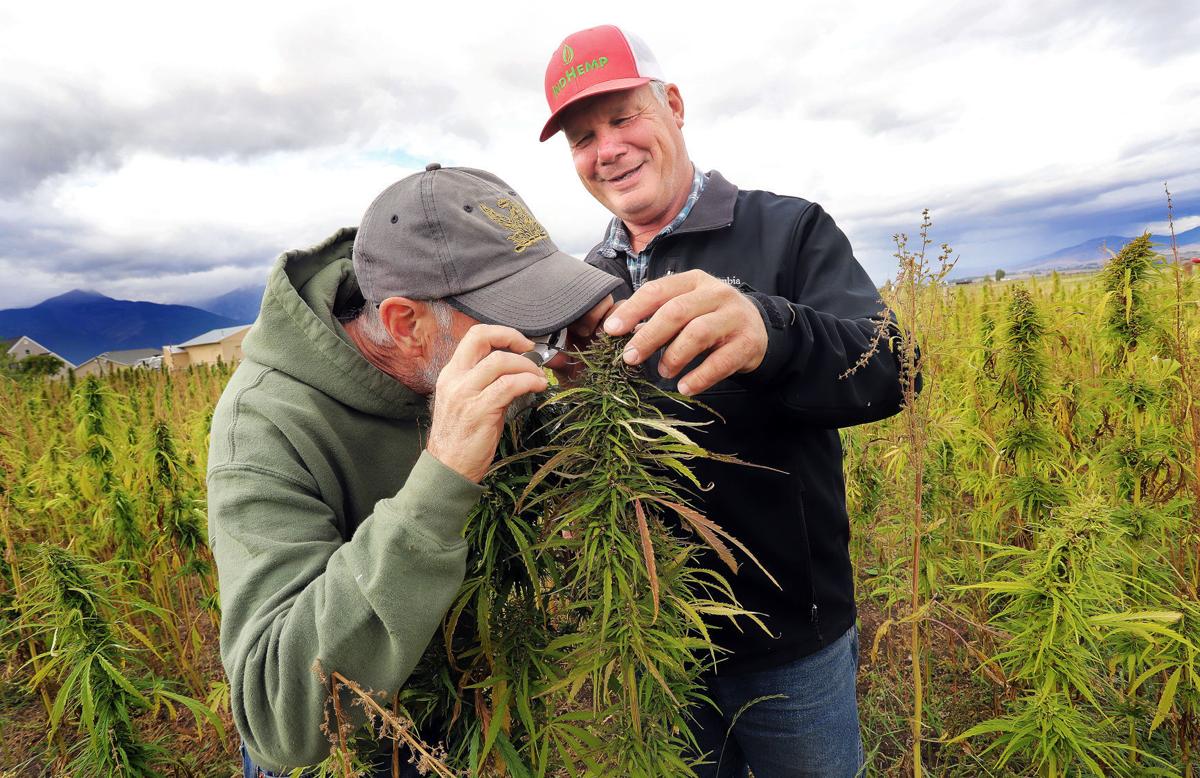 Arlin Fratzke smiles as he watches his fellow Bitterroot Hemp Cooperative member Andrew Burgess take a close look at one of the hemp plants that he grew this summer on his family's farm east of the Stevensville airport. Fratzke plans to harvest the seeds from the hemp plants to sell to a hemp oil processor in eastern Montana. 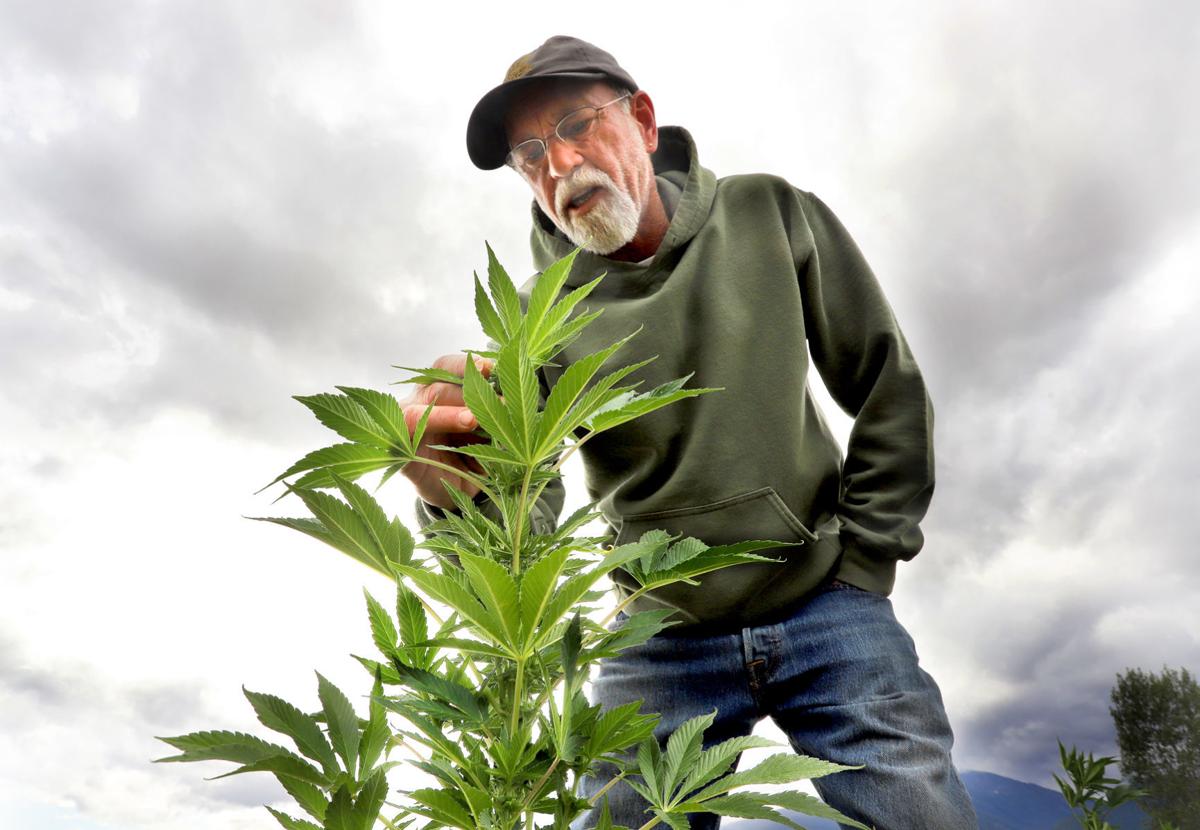 Bitterroot Hemp Cooperative board president Andrew Burgess looks over one of his hemp plants recently at his home between Stevensville and Florence.

Sometime soon, Arlin Fratzke will say goodbye to the registered herd of Angus cattle that his family has raised for decades on their place not far from the Stevensville airport.

Next summer the grass those cows depended on will be gone.

In its place will be 100 acres covered in a plant that wasn’t even legal to grow in Montana just a few years ago.

“I’m going to put it all in hemp,” Fratzke said. “I’m really looking forward to seeing what it will do next year when I put all the lessons I learned this year to work.”

On a recent afternoon, Fratzke and fellow Bitterroot Valley hemp grower Andrew Burgess took a stroll through the 20-acre test plot of industrial hemp that Fratzke planted this spring. Every once in awhile, they’d stop to stare through a magnifying loupe to study the plant’s buds and seed crop.

Sometime later this week — if the weather holds — a combine will harvest Fratzke’s first crop of hemp seeds that will eventually be processed for their oil at a new facility currently under construction on the other end of the state.

This year was one for learning for the members of the state’s first industrial hemp cooperative that formed late last year in the Bitterroot Valley.

“We had 14 growers in the cooperative this year,” said Burgess. “We expect to double that next year.”

With its unusual amount of rain and cooler-than-normal temperatures, this summer created its own challenges for some of the novice hemp growers in the valley.

Burgess hoped to tap into the lucrative CBD (cannabidiol, a non-intoxicating compound) market when he purchased seeds at $1 a pop, but his plants didn’t grow as fast as he’d hoped.

“They should be as tall the fence,” he said while walking through straight-as-an-arrow rows of neatly planted hemp plants. The tallest was probably 3 feet high. “They didn’t take off like I expected them to. We’re hearing similar reports from other places around the state.

“If I can just get three more weeks, I should be able to get a crop with some value,” Burgess said.

Burgess purchased his seeds from a grower in Oregon. Others who bought from Colorado experienced the same lack of growth this season.

Fratzke’s seeds came from Canada. While they fared much better overall, he had his own learning curve on what works and what doesn’t with the unfamiliar crop. He discovered that hemp plants don’t do well when they are overwatered.

He used flood irrigation. In the places on his field where the water pooled, the plants were stunted. That irrigation method also created some challenges in getting the seeds to germinate evenly.

Next year, Fratzke plans to put all his hemp crop under a pivot.

“I think my yield is going to go up considerably,” he said. “I found that hemp plants don’t tolerate a lot of water. They don’t like standing water at all. You can get away with putting a lot of water on alfalfa or grass, but not hemp.”

Next year’s crop from the same field should bring in twice as much revenue. It will be three years since he put any fertilizer or herbicide on the 20 acres, which will allow classifying the crop as organic.

“That will make a difference too,” he said.

There has been a lot of experimentation this past summer among members of the hemp cooperative. This winter, Burgess said they will all share what they learned as they look for new opportunities to market their future crops.

The growing interest in raising industrial hemp exploded after Congress changed restrictions in growing the cousin to marijuana when it passed the 2018 Farm Bill. That legislation allowed for hemp cultivation and the transfer of hemp-derived products across state lines for commercial purposes. It also did away with restrictions of the sale, transport or possession of hemp-derived products that are produced in a manner consistent with the law.

The production of hemp remains highly regulated, with rules in Montana that currently favor the larger growers in the eastern part of the state. Currently, a license costs $850 to grow hemp for both someone growing a quarter-acre behind their home or with 10,000 acres of dryland in eastern Montana.

“That scared a lot of people off from the beginning,” Fratzke said. “We’re really hoping that will change.”

Updated rules from the United States Department of Agriculture are expected to be out in October and November, which both men said should help provide some additional certainty for the future. The state is also expected to update its rules.

Fratzke was named this year to the state hemp advisory committee to represent small growers on the western side of the state. In October, that committee will be talking about the potential of creating a 1% assessment on hemp products that would be used toward promotion and research for the crop in Montana.

“The state of Montana is pro-hemp,” Fratzke said. “There was more hemp grown in Montana than any other western state last year. There were 22,000 acres last year and I expect that number will grow this year. The state department of agriculture is working hard to promote it.”

It’s been a ride that the former pilot who has flown freight all over the world has enjoyed this summer. When he considers all the potential uses for industrial hemp — which includes everything from building materials to cooking oil to the lucrative CBD oil — Fratzke sees a lot of potential here in the Bitterroot Valley for people in agriculture.

“We are in on the ground floor of this,” Fratzke said. “People tell me that they can’t believe that I’ve sold all my cows and planted weed. … Being on the forefront of something doesn’t happen a lot in a person’s lifetime.”

The Bitterroot Hemp Cooperative will hold its next monthly meeting on Sept. 20 at 6:30 p.m. at the Ravalli County Economic Development Authority building, 274 Old Corvallis Road, Hamilton. Anyone wanting more information about the cooperative can call 406-209-8984 or email BitterrootHempCoop@gmail.com

Fall burning season officially is underway in Ravalli County, following a soaking rain that dropped nearly an inch of precipitation.

A little over a week ago, Ben North was starting to think about how he was going to ensure that his family stayed warm this winter.

Stevensville’s fire and police departments will remember the first responders who lost their lives on Sept. 11, 2001.

The man who led an armed standoff with the federal government in Oregon has inserted himself into a Ravalli County dispute.

A Hamilton couple whose garage access was blocked by a new school district road were surprised Thursday with a ramp to the garage.

A Hamilton couple who thought the issue of a berm blocking their driveway had been resolved got a rude awakening Friday.

No one knows for certain exactly where vendors of Hamilton’s popular farmers market will set up their booths next summer.

Right now, folks at the Bitterroot Aquatic Center expect to get about eight good weeks of use of their outdoor pool.

There’s something new to look at for travelers coming into Hamilton from the north.

A private commercial fish hatchery south of Hamilton has been placed under quarantine after the discovery of invasive New Zealand mud snails.

Arlin Fratzke smiles as he watches his fellow Bitterroot Hemp Cooperative member Andrew Burgess take a close look at one of the hemp plants that he grew this summer on his family's farm east of the Stevensville airport. Fratzke plans to harvest the seeds from the hemp plants to sell to a hemp oil processor in eastern Montana.

Bitterroot Hemp Cooperative board president Andrew Burgess looks over one of his hemp plants recently at his home between Stevensville and Florence.