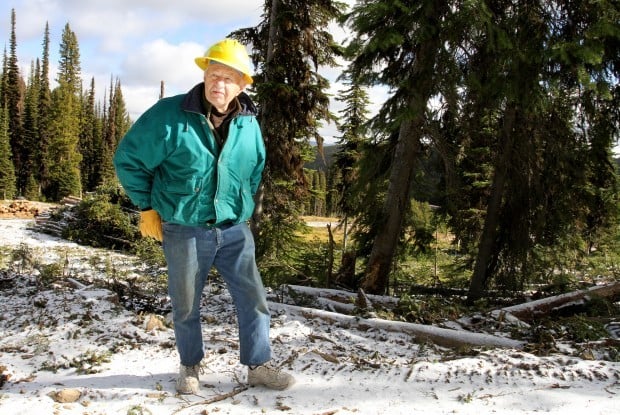 Bill Grasser takes a look at the ongoing thinning project at Lost Trail Powder Mountain ski area Wednesday. "This is great," said the man behind the development of the popular ski hill. "Anytime we get to manage the forest, it's great." 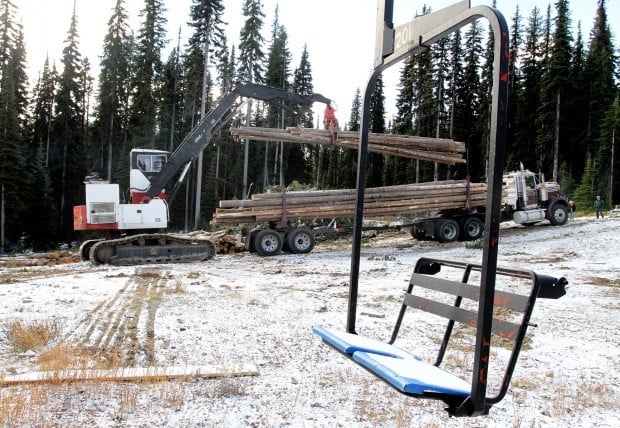 Loggers are working against the clock to complete the first portion of a thinning project this month at Lost Trail Powder Mountain ski mountain.

The steady march of red pine trees on the mountainsides around Salmon, Idaho, and in the Big Hole that announced the arrival of the mountain pine beetle.

In the last few ski seasons at Lost Trail Powder Mountain, the area’s co-owner heard skiers voice their concerns about all the red trees that were showing up between the runs.

“It seemed like this last year the public was really sitting up and taking notice of what was happening here too,” Grasser said. “It’s been on our radar screen for years. We’ve seen what happened in other places in the state.”

And so Wednesday, Grasser was all smiles as he accompanied a tour of the ongoing thinning project on about 250 acres at the ski area.

Crews from Sun Mountain Lumber of Deer Lodge were busy loading logs onto trucks on the north side of the mountain. On the other side, between ski run favorites named Far Out and Southern Comfort, a feller/buncher was cutting and piling trees at a rapid pace.

By the end of October, the logging crews are expected to complete thinning on about one-third of the project. The rest will be finished next summer.

Lost Trail Powder Mountain is the second most popular recreation site on the Bitterroot National Forest. Every year, more than 45,000 people come to ski and enjoy the area’s aesthetics.

Unchecked, Grasser and others worried the increasing mountain pine beetle epidemic could dramatically change the look and feel of the ski area.

In July, the Bitterroot Forest thinned about 170 acres of small-diameter lodgepole pine trees from overcrowded stands near the Saddle Mountain lift on the north side of the mountain at a cost of $85,000.

The year before, the agency signed a settlement agreement with the Grasser family to manage an additional 250-acre timber project. The Grassers contracted the timber sale to Sun Mountain.

The family leases over 1,800 acres from the U.S. Forest Service for the ski area.

Grasser said his family took the lead in the project in an effort to move it along as quickly as possible.

“It’s really a matter of timing and us being able to have some input into what happened here,” he said. “We knew that if the Forest Service took the lead, it would be next year before we could get the work done.”

Bitterroot Forest staff planning officer Jerry Krueger said the agency opted to use a categorical exclusion on the project, which also helped put it on the fast track.

“We understood the importance of timing on this project,” he said.

Mountain pine beetle infestations have been on the rise in the Bitterroot Forest for several years, especially in its southern reaches.

“We’ve seen a six-fold increase in the number of infected trees between 2009 and 2011,” said Bitterroot Forest spokesman Tod McKay. “Every tree that is attacked can produce enough beetles to infest as many as 14 more trees.”

An aerial survey in 2011 found 60,000 acres of the Bitterroot Forest with trees killed by the mountain pine beetle.

This year, the Bitterroot Forest has focused efforts to dampen the damage from mountain pine beetle attacks at its most popular recreation sites.

Nearly 700,000 board feet – the equivalent of 160 truckloads – is being salvaged from Lake Como, the national forest’s most popular recreation site. Another 400,000 board feet of beetle-killed trees were removed from 12 campgrounds and recreation areas on the West Fork and Sula ranger districts.

When those projects are completed, Krueger said most of the recreational sites on the southern end of the forest will have been logged.

At Lost Trail, Krueger expects that nearly one million board feet of timber will be removed in the thinning project this year and next.

The national forest is looking at two different techniques to battle the pine beetle at the ski area.

The insect zeroes in on pine species, like lodgepole, while leaving other species like fir and spruce alone. And so, in some stands, loggers are removing all the lodgepole and leaving the other species behind.

On the southern edge of the ski hill, the stands are predominately lodgepole.

Bitterroot Forest vegetation management officer Andrew Tassler said loggers are instructed to reduce the density of those stands to the point that there is about 20 to 25 feet between trees.

By reducing the stocking levels, the remaining trees don’t have to compete as much for water and other nutrients, which gives them a better chance of warding off the insects.

The beetles also depend on pheromones to know which trees to attack. Opening up stands allows the air to circulate more and diffuse that chemical substance.

“We are looking for stocking levels that hopefully won’t support populations of mountain pine beetle,” Tassler said. “It also happens to be the perfect spacing for skiers.”

While the focus is on forest health and hazard reduction, Grasser said skiers are going to notice the difference this winter.

“I think the skiing public is going to go nuts,” he said.

It’s been an effort that’s taken a lot of cooperation between all parties.

“We are so fortunate to be able to work with the Forest Service and this opportunity to do something to preserve the health of forest,” Grasser said. “I don’t know of any other ski area that has a project of this magnitude. We know there are other ski areas that are chomping at the bit to do something like this. We’re doing it.”

A well-known Bitterroot Valley climber and outdoorsman died Saturday after falling about 1,000 feet down a steep, ice-covered slope.

A Hamilton man who allegedly strangled a man and stole his pistol allegedly told an officer he did so because he felt disrespected.

A Corvallis man trained as an MMA fighter faces charges he strangled a woman and assaulted a child.

A Corvallis man with a record of getting in wrecks while driving drunk appeared Thursday in Ravalli County Justice Court on felony charges after vehicle collided with a car carrying two teenage girls.

Bill Grasser takes a look at the ongoing thinning project at Lost Trail Powder Mountain ski area Wednesday. "This is great," said the man behind the development of the popular ski hill. "Anytime we get to manage the forest, it's great."

Loggers are working against the clock to complete the first portion of a thinning project this month at Lost Trail Powder Mountain ski mountain.