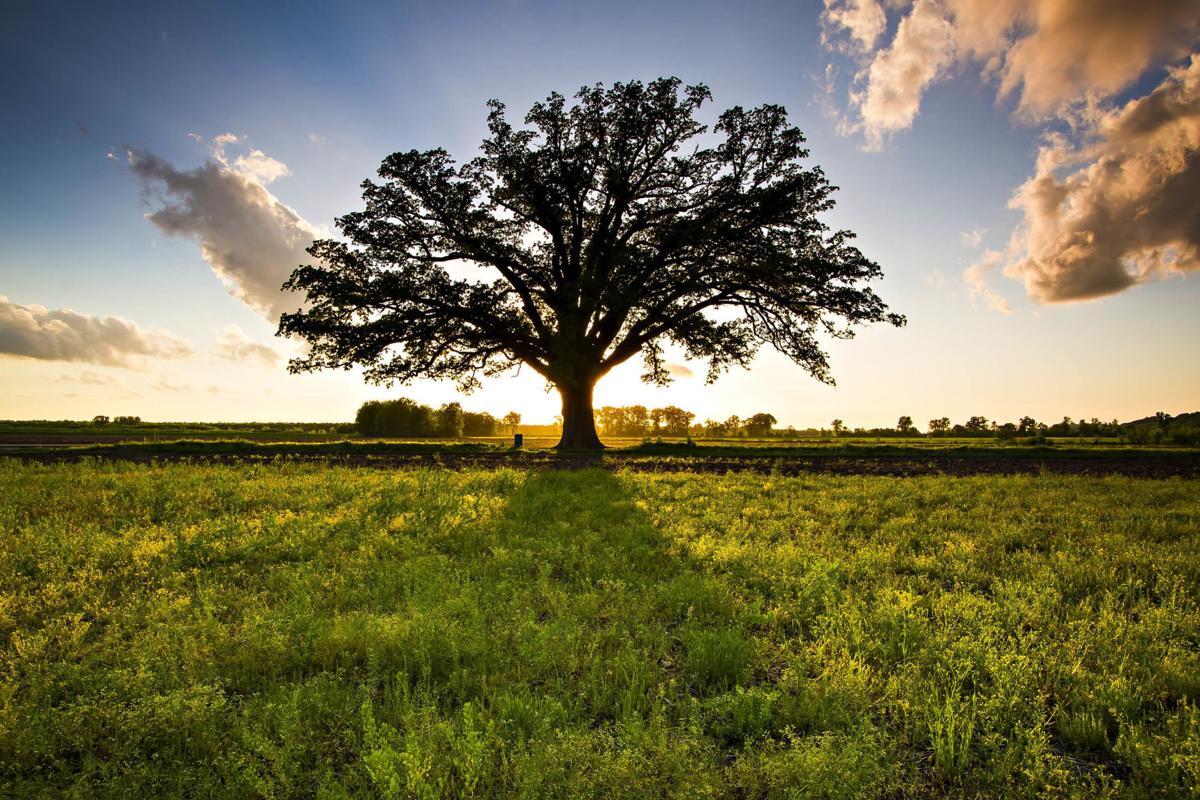 Bur oak are the best oak tree variety for western Montana. The McBaine Bur Oak (pictured above) is a national champion tree located in the Missouri River bottomlands outside of Columbia. The more than 350 year-old oak is simply known to many Mid-Missourians as "The Big Tree."

Q: I grew up with oak trees, and I would love to have one in my yard now that we have moved to Montana. I am hearing only discouraging news about the possibility of having an oak tree. Any ideas?

A: I grew up with oak trees too. Most kinds are not likely to be happy here. Many require warmer winters. Others need wet soil or acid soil. When I investigated the possibilities, I decided to try a bur oak. It is native to the Great Plains. It tolerates all kinds of bad weather and all kinds of soils. It does like full sun.

I grew my bur oaks (I have two of them) from acorns produced by a local tree. They are about 25 years old now, and they demonstrate that oaks never sprint away from the starting gate. One is about 20 feet tall. The other, which gets less sun and suffered from competing plants until I cut them down, is only half that high. Both are healthy. Neither has been attacked by disease or insect pests. They require no special care.

The bigger of the two of my oaks even has made a few acorns in the last three years, although they drop prematurely. Some year acorns will ripen. Barring some accident, the oak trees look likely to outlive me by many years. Eventually, their canopies will widen as the trees grow to their mature shape.

When planting an oak, be sure to think about its mature size. Bur oaks are big trees, finally reaching a height and spread of 80 feet or more. One in Illinois is estimated at 300 years old and is close to 100 feet tall. A bur oak is the one I would recommend for western Montana, as long as you have space for it.

Q: How should I take care of my bougainvillea over the winter?

A: Leave the pot in the place where it has been happy, but do not water it until the surface of the potting soil is dry, and do not fertilize it. If the bougainvillea has become scrawny, cut back the longest shoots to spots where they can start new branches. That will encourage the plant to grow more flowering side shoots.

In February, you can cut as many shoots as you like back to two buds. That is the time when the plant will start its annual growth cycle. Bougainvilleas are not difficult house plants, but they do need regular, major pruning to fit in the confines of a house. Outdoors, in the tropics, they can be 40-foot vines. Fortunately, they respond favorably to all kinds of pruning. There even are bougainvillea topiaries.

Do not panic if your bougainvillea drops its leaves this winter. Some do.

Q: A friend gave me some starts for comfrey, since she thinks it is good for the soil. I am worried about its being an invasive weed. In its first summer it seemed to spread widely. Do I have a problem?

A: You may. Although comfrey leaves are rich in nutrients, the plants can be rampant growers. Perhaps that is an understatement. Comfrey may require vigilance and timely intervention to prevent it from taking over your garden.

When comfrey turned up in two places in my vegetable garden, I decided that it was not worth the work it would require, and I removed the plants. Other gardeners disagree. They allow comfrey to grow under a watchful eye. Some gardeners harvest comfrey regularly and add it to the compost pile. Some cut plants and leave them in the garden as organic fertilizer.

Growers who are interested in herbal medicine may grow comfrey for its medicinal properties. It has been used for centuries. One common name for the plant is boneset, since it was believed to aid in the healing of broken bones. Comfrey is still considered a natural remedy for inflammations and rashes. It is no longer made into medicinal tea; that turned out to cause health complications.

If you want to try growing comfrey deliberately, you might want to plant one of the cultivars that are better behaved and less likely to cause you future problems. Probably you want to start with a plant and not seeds. Comfrey is slow to start from seed and may not appear for two years.

Q: What is the knapweed weevil that you recommend?

A: Is scientific name is Cyphocleonus achates, and it is a tiny beetle with a long snout which gives it the “weevil” name. Adult weevils lay eggs on the crowns of spotted knapweed plants. The eggs hatch within two weeks, and the larvae crawl down into the center of the roots, where they feed underground.

There is another knapweed biocontrol also; it eats the seeds that form on the flowerheads. Some gardeners describe better success than others with both insects. In my experience, they moved in and ate so much knapweed that I had to deal with a knapweed successor — cheatgrass.

Some years I see more knapweed plants than others, and I assume that is related to how many beetles survived the winter. However, in the field where knapweed once was a dominant plant, I have never again seen enough to worry me. The beetles continue to do their work.

A: Lack of fruit would not have been caused by the weather. Most local blueberries produced exceptionally well. There are several other reasons why blueberries do not fruit well: Did they get enough water? If there was any period when their mulch was not in place, they may have suffered a dry spell. Was their wind protection intact? Are they getting agricultural sulfur once a year?

Since these are older plants, did you prune them within the last two years? Blueberries need only a little occasional pruning, but some is necessary to encourage new stems. Old wood does not fruit as well as young wood. If your bushes have only old stems, cut two or three off each plant. That should stimulate the growth of new stems, although it may be two years before your berry production is noticeably better.

“I see gardening as a reiteration: I do a bit, then nature does her bit, then I respond to that, and so on, not unlike a conversation. It isn’t whispers or shouts or talk of any kind, but in this back-and-forth there is a delayed and sustained dialogue. I have to admit that I am sometimes the slow one to respond, and that I can go a little quiet on it all, so it is good to have plants that can survive some neglect.” Sue Stuart-Smith, The Well-Gardened Mind

Q: I want to make my garden as organic as possible, but I can’t follow all the rules for certified organic production. What do you think is mo…

Q: Is it time to put my poinsettia in a closet if I want it to bloom for Christmas?

Q: I am noticing that many of the trees are showing fat buds at the ends of the twigs. They look the way they do in spring. Is this the result…

Dirty Fingernails: There are many ways to fertilize your soil

Q: What kind of fertilizer should I use for vegetables? flowers? grass? Do tomatoes require a special fertilizer?

Dirty Fingernails: Some tips on getting that Christmas cactus to bloom

Molly Hackett shares some sage advice on Christmas cactus in this week's installment of Dirty Fingernails.

Bur oak are the best oak tree variety for western Montana. The McBaine Bur Oak (pictured above) is a national champion tree located in the Missouri River bottomlands outside of Columbia. The more than 350 year-old oak is simply known to many Mid-Missourians as "The Big Tree."