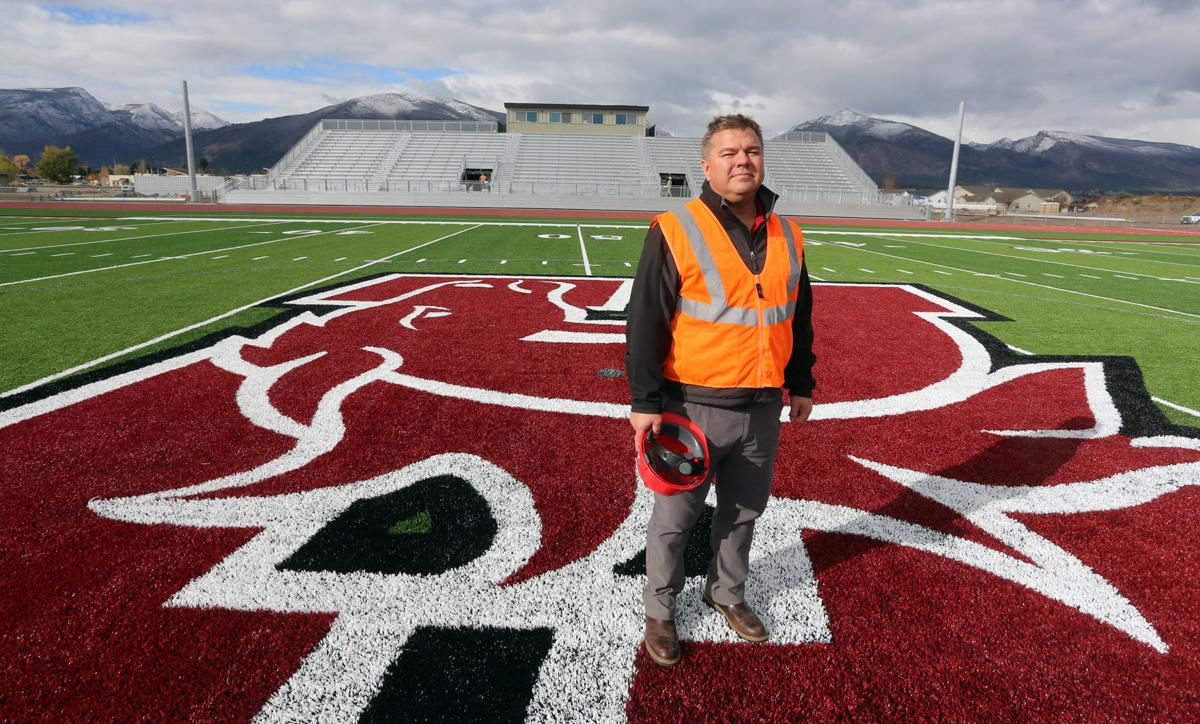 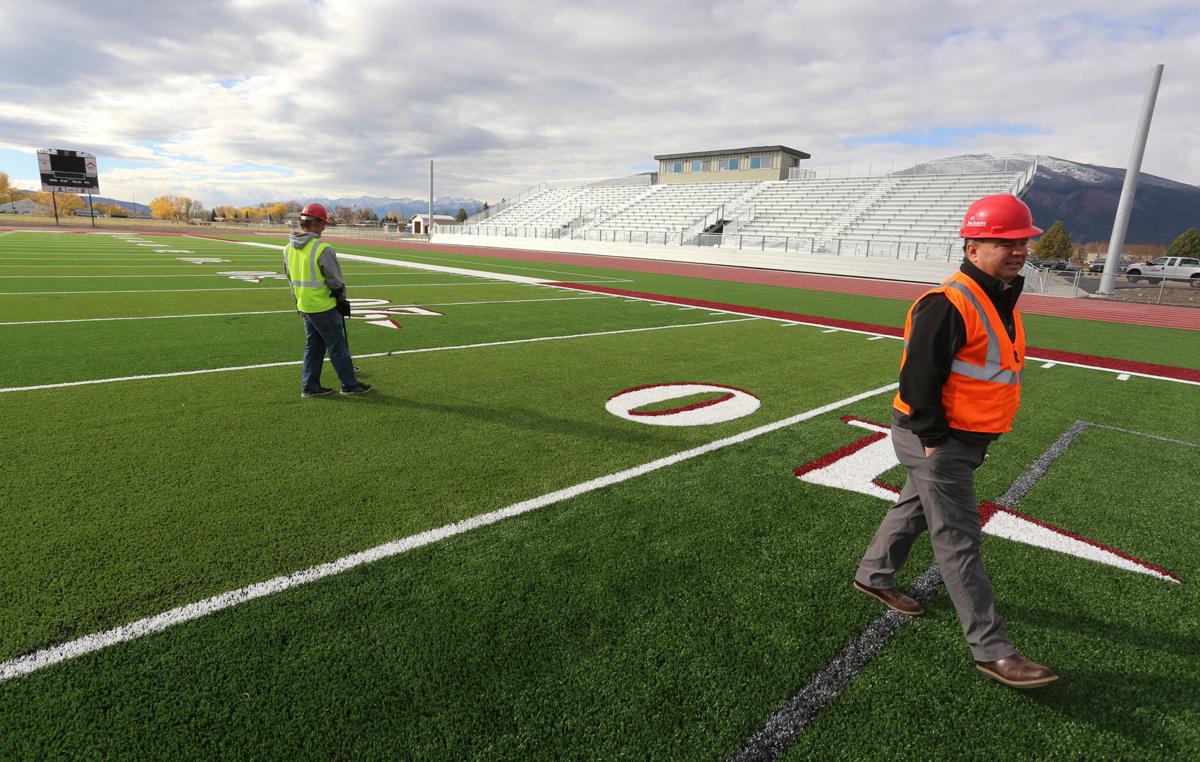 A worker with Jackson Construction makes a final sweep with a metal detector over Hamilton Athletic Complex's new field Tuesday as school superintendent Tom Korst offers a tour of the facility that could play host to a quarterfinal playoff game on Saturday.

If everything comes together as hoped, the grand opening of Hamilton High School’s new athletic complex could happen Saturday with a ribbon cutting, skydivers and a flurry of free Bronc rally towels.

As of Tuesday, it wasn’t certain just exactly where that game would be played.

“We’re doing everything we can to be able to play the game at the new athletic complex,” Hamilton School Superintendent Tom Korst said. “That team has worked really hard all year. They’ve watched the construction since it began in the summer. It would be a great way to reward this bunch of kids by offering them a chance to be the first to play on the new field.”

A couple of things still need to come together over the next couple of days to make that a reality.

Workers from Jackson Construction were hurriedly putting on the final touches Tuesday. Korst said city and county officials still need to do a final walk through to ensure that everything is sound before giving the final approval necessary for the district to host the game at the new facility.

“We just have a few more hoops to jump through,” Korst said. “We’re feeling pretty good that there’s a strong likelihood that this is going to work out.

"We also know that we have a good field at Haynes if we need to go there. It’s a great backup plan.”

Korst credits Jackson Construction’s hard work to put the district in the position to potentially play at the new complex this weekend.

“They did a great job in getting ahead,” he said. “The original deadline was Nov. 13. They were able to bump it up by 10 days.

"I think we should know for sure by Thursday evening.”

The new athletic complex includes an over-sized, synthetic turf field that will accommodate both football and soccer. A 10-lane synthetic track encircles the ball field.

The gleaming new stadium will seat almost 1,600. It includes rooms for both home and visiting teams, a large concession area and heated restrooms. The High School Booster Club worked with businesses willing to sponsor the $180,000 scoreboard that includes a video display.

The facility could open all kinds of new doors for sports in Hamilton, including the potential of bringing state track meets to the Bitterroot or playing high school soccer at night.

When Korst looks over the facility, he sees a 50-year investment that will serve as just one more reason why people looking to settle down in Montana will give Hamilton a good, hard look.

Voters approved a $9.75 million bond in May 2017 to remodel and expand Daly Elementary and build the new sports complex.

While both projects have cost more than what was initially budgeted, Korst said the district has been able to make adjustments so property owners won’t see an increase in their taxes.

Korst said there have also been concerns that the costs for the new athletic complex were being absorbed by the Daly Elementary project.

“We are actually doing more than what we initially planned at Daly,” Korst said. “Rather than adding eight classrooms, we are adding 12.”

The district opted to wait on beginning construction at Daly this spring because there was so much competition from other building projects around the state. Korst said the construction company doing the work at Daly estimates the district saved $300,000 by pushing the start date back to this fall.

The plans call for the Daly project to be completed by March 2020.

With construction nearing the end on the athletic complex, Korst said Hamilton’s facility is probably the best in the state.

“It is certainly the newest construction,” he said. “It has a new generation of turf.

"We’re hoping the turf will last at least 15 years. Laurel has 12 years into theirs.”

Broncs’ head coach Bryce Carver believes that his players will be honored to be the first to take the field at the new complex if that happens Saturday.

“Obviously, we have a great tradition at Haynes Field, but I do think the kids are excited about being able to play at the new stadium,” Carver said. “This field is quite the deal. We got to practice on it. It’s one of the nicer turf fields that I’ve ever been on.

“I keep telling people that we live in Montana and it’s the first of November,” he said. “It never feels good when you go down on the frozen grass or frozen mud. This new field will give us that advantage. It’s exciting to be part of a new chapter of high school football in Hamilton.”

The high school office is selling tickets for the playoff game, which can also be purchased where the game is played. Tickets are $7 for adults, $6 for students. Conference and school passes aren’t accepted.

If the game does end up being played at the new facility, there will be an incentive for fans to show up a little bit early. A ribbon cutting for the grand opening of the complex will be held at 12:45 p.m. followed by skydivers if the weather allows. The first 600 Bronc fans into the game will receive free Bronc Rally towels.

There’s a threat of rain in the air, but Finis and Swix couldn’t care less.

A worker with Jackson Construction makes a final sweep with a metal detector over Hamilton Athletic Complex's new field Tuesday as school superintendent Tom Korst offers a tour of the facility that could play host to a quarterfinal playoff game on Saturday.